Posting a Photo-A-Day is good for me. It keeps me active physically and sharpens ability to see potential photographs.
But especially, photography stirs my gratitude for the goodness of the Grand Creator, and the design seen in nature. I hope to continue posting a daily PAD.
When I can't make it on a shoot, I will post an image from another day. 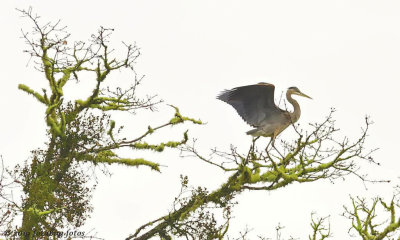 Beautiful Touchdown!
No, not talking about football, though there are lots of bowl games to watch right now. There is not a more beautiful touchdown than this one! 🧐 This Great Blue Heron weighs about five pounds, so it can easily land and perch on those small twigs and branches at the top.
12 comments leave a comment 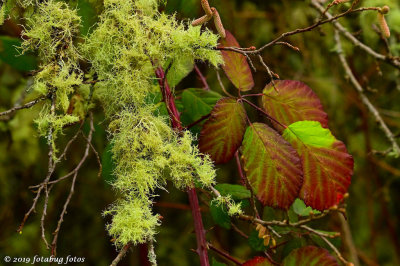 Lichen and Leaves
The trees in Kirk Park are covered with lichen and moss. Though it can be pretty, I am not sure it is good for the trees. If you look closely, you can see that those pretty leaves are on a blackberry vine. I thought the two, lichen and leaves, made a nice combination.
16 comments leave a comment 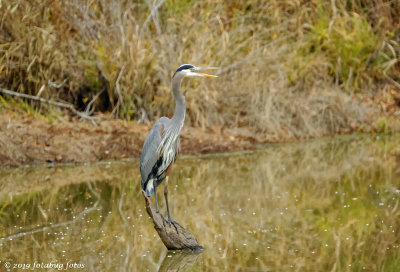 "Great" Blue Heron is Fitting!
Ever since I saw my first Great Blue Heron, I have been fascinated by them. What a wonderful sight they are, either on land or in the air! On land their size impresses and their skills as hunters are many, in the air their wingspan and slow, steady wing beats carry them far and quickly. When a person examines how they are constructed , they can't help coming away in awe. They are built for flying.
The website, "All About Birds"- http://www.allaboutbirds.org/guide/Great_Blue_Heron/overview - sums up the Great Blue Heron well, when it says, under 'Basic Description':
"Whether poised at a river bend or cruising the coastline with slow, deep wingbeats, the Great Blue Heron is a majestic sight. This stately heron with its subtle blue-gray plumage often stands motionless as it scans for prey or wades belly deep with long, deliberate steps. They may move slowly, but Great Blue Herons can strike like lightning to grab a fish or snap up a gopher. In flight, look for this widespread heron’s tucked-in neck and long legs trailing out behind."
17 comments leave a comment 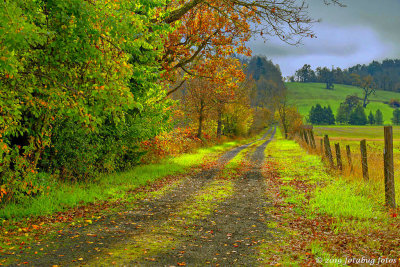 Country Lane
I have made photos of this lane before and it seems to have a great attraction for me. I just had to shoot another, with the sunlight contrasting with the shaded parts. The old fence on the right and trees lining the lane on the left, and the hill in the distance all combine to give it that appeal. Also, the bit of sunIight contrasts nicely with the dark clouds above the hill. Guess you can tell that I just happen to like it! 🤓
22 comments leave a comment 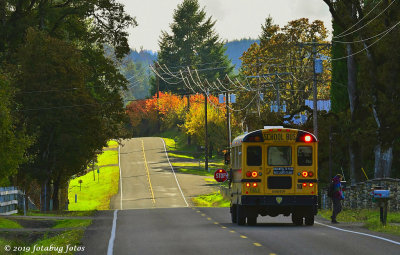 Home From School
For many kids this is the best part of the day. I guess we all liked it too! It's been a long time since I was in school, but I have lots of memories, both good and bad. This photo was made while we still had some vivid colors.
It certainly couldn't have been today, which brought strong wind gusts and rain. Tomorrow will be even wetter. But we have been way behind on our rainfall for this time of year, so it is good to get it. Along with that, it brought 12 to 24" of snow in the Cascades.
16 comments leave a comment 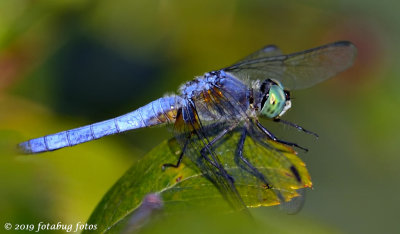 Taking a Break
i just had to post this close up of a Dragonfly from summer, which now seems some time ago. What a wonderful flying machine this insect is!
According Wikipedia: "A dragonfly is an insect belonging to the order Odonata, infraorder Anisoptera. Adult dragonflies are characterized by large, multifaceted eyes, two pairs of strong, transparent wings, sometimes with coloured patches, and an elongated body."
Lifespan: 6 months (Talk about a short lifespan!)
Size: Average size of a dragonfly is from 1 to 4 inches in length.
(Ever wonder how they fly in a strong wind, or rain?)
14 comments leave a comment 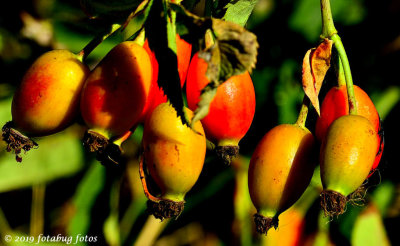 The Wonderful Rose Hip
Think about about how much of what you are fond of is found in nature! Even what we are not familiar can be valuable to us and worth learning about. Take, for example, the rose hip. They are sometimes called the fruit of the rose, as well as containers for rose seeds that some rose bushes produce.
"It is said that three ripe rose hips have more vitamin C than one orange. Because of this, they are often used in recipes. Rose hips have a sweet, yet tangy, flavor and can be used dried, fresh or preserved for future use. Steeping them to make rose hip tea is a common way that rose hips are used, making not only a nicely flavored tea but also one with good vitamin C content. Some folks use rose hips to make jams, jellies, syrups and sauces. The sauces can be used for flavoring in other recipes or on their own." SEE: https://www.gardeningknowhow.com/ornamental/flowers/roses/rose-hip-information.htm
We aren't the only ones appreciating the rose hip. "If the rose hips are left on the bush and never harvested, the birds will find them and peck out the seeds, eating these fine fruits as a great source of nourishment in the winter months and beyond. Bears and other animals love to find patches of wild roses and harvest the rose hips too, especially after just coming out of hibernation."
So, next time you see some rose hips on a wild or some domestic rose bushes, stop and take a look. You will see a thing of beauty, one useful both to humans and other creatures.
17 comments leave a comment 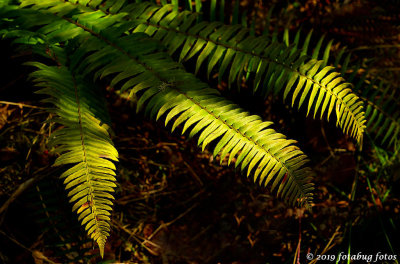 The Fern Leaf is a Wonderful Thing!
Have you ever really thought about the leaf of the fern?
Here, out in nature, they can be seen at most every turn.
So simple in design, yet there is much more to see.
There's Frond, Midrib, Petiole, Pinnate and Sori.
And we still haven't mentioned Fiddleheads, also Rhizomes,
inconspicuous as they grow underground in their homes.
Next time you see a fern, stop and think about why,
they were put there to be enjoyed by both you and I!
(Feeble attempt at poetry for Russ, a good guy!)
If you want information about the names mentioned above,
see: https://www.fs.fed.us/wildflow…/beauty/ferns/structure.shtml (which I love.)
23 comments leave a comment 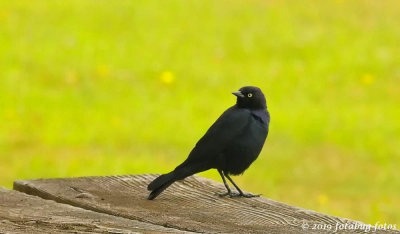 Brewer's Blackbird
This sweet little bird looks like a Brewer's Blackbird, from what I can tell. I love the bright eye!
See ' http://www.allaboutbirds.org/guide/Brewers_Blackbird/' for more information. Another blackbird close to this is the Rusty Blackbird, but it looks like the bill is different. Here is what 'All About Birds' says about the Brewer's Blackbird: "Most birds fly south for the winter, but a small number of Brewer’s Blackbirds fly west – leaving the frigid Canadian prairies for the milder coastal regions of British Columbia and Washington." I would assume that they also reach Oregon.
20 comments leave a comment 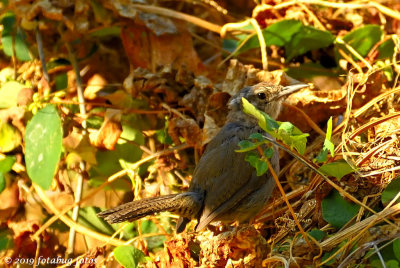 Hiding Among the Leaves
I believe this is a House Wren, which some consider an ordinary looking bird. But what I always notice is that beautiful tail often tilted upward.
The website, "All About Birds" ( http://www.allaboutbirds.org/guide/House_Wren/id) said this about the house wren - "A plain brown bird with an effervescent voice, the House Wren is a common backyard bird over nearly the entire Western Hemisphere. Listen for its rush-and-jumble song in summer and you’ll find this species zipping through shrubs and low tree branches, snatching at insects. House Wrens will gladly use nestboxes, or you may find their twig-filled nests in old cans, boots, or boxes lying around in your garage."
"Small and compact, with a flat head and fairly long, curved beak. Short-winged, often keeping its longish tail either cocked above the line of the body or slightly drooped."
15 comments leave a comment 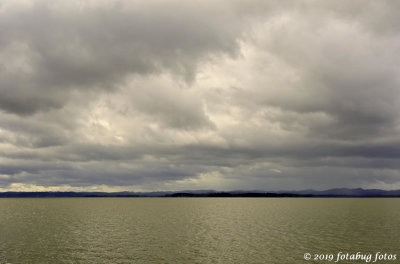 Gotta Get Used to It!
This view of Fern Ridge Lake under clouds will be a common scene this winter. Oh sure, we will get sunny days this winter, maybe tomorrow, but they will usually be cold. At least with cloudy days the temperature is warmer. Those clouds keep some heat in. Of course, I enjoy the clouds. They can be so varied and interesting. I enjoyed this scene.
19 comments leave a comment 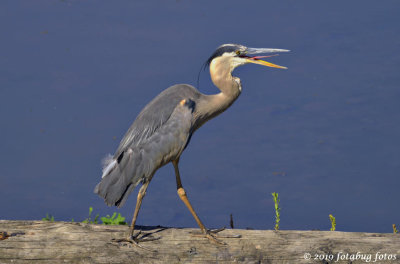 Walking and Talking!!
Who says one can only do one thing well at a time? This Great Blue Heron was doing quite well at walking at the same time it was doing a little squawking. I do love those big birds! They would tower over some small children. There are a lot of them at Delta Ponds year-round. I will never make use of all of the nice photos I have of them. But I can never resist shooting another one.
24 comments leave a comment