This gallery serves to inspire you to look at photography in a different perspective; through my eyes. In every photo you will find a short personal interpretation of the image. I wish to invite you to join in and share your views and thoughts, which will be a valuable learning tool in our photography journey. Please also visit : 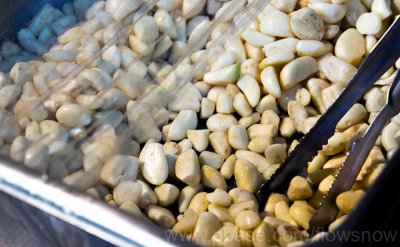 Abundance raw garlic
I have been eating garlic the wrong way. One shouldn't crush it but consume it whole. The active ingredient is destroyed within one hour of smashing the garlic. So next time you know why you must eat garlic as it is....wow.... This should be very challenging for me as you guys know garlic is `strong' in the mouth. Have you tried eating garlic raw like candies? This site explains the reason: http://www.jesus-is-savior.com/Health_Concerns/eating_raw_garlic.htm 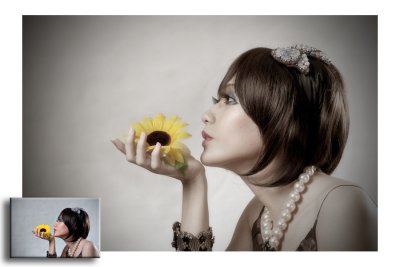 Faded Antique Look
Enclose is a picuture of the faded look which I tried using Scott Kelby's technique. It's actually very easy to do. I am glad I found a systematic way to do it, rather than my usual inconsistency style through trial and error.
Take a look at the before and after photos.
I know the effect is not like an antique look. Perhaps it's the colour/setting. But I followed the flow and instructions....anyway...experiment and suit to taste. :D 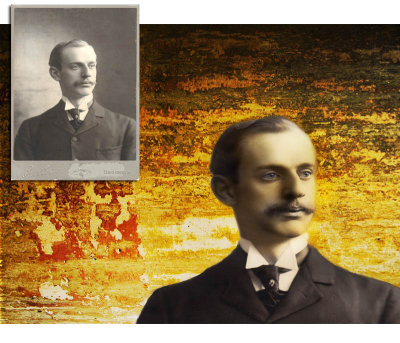 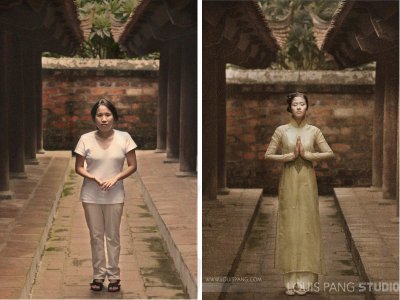 Vietnamese Girl
Almost Louis. Louis Phang is Malaysia's best wedding photographer. He won a prestigious award -
International Portrait Print of the Year 2010, WPPI,
shooting this beautiful Vietnamese lady at Temple of Literature. I remembered he took this shot at this place in Hanoi and visited the place, well I didn't have the costume, did try to pose like her at the same spot - as you can see she is absolutely beautiful...compared to me...hahaha...
Tried to PS his style, didn't quite get to it but almost...hehe...
He has his secret tips to this serene picture. I only read it after I did this picture of `moi'......so didn't actually do what he did...haha...but it turned out okay....tried my best to copy without copying....cliche as it sounds. http://www.louispang.com/2010/04/behind-the-international-portrait-print-of-the-year/ 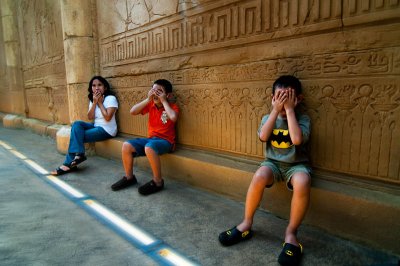 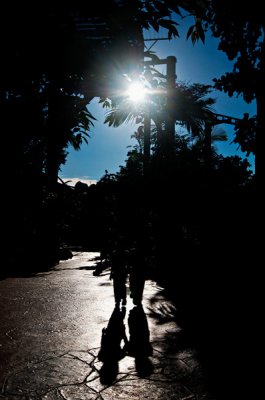 Shadows
I always enjoy taking back light images especially when the sunlight is at the back of the subject. I chanced this opportunity to capture the shadows of two walking people in the park which turned out alright. In addition I set it to 2 exposure down to create the shadow effect. 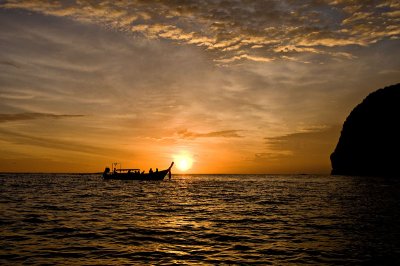 Timeless Sunset
Out over the ocean, and it’s waves it lay,
A magnificent orange sphere, as it drops to the sea,
With spears descending from within the fire,
The magnificent beauty of the sunset each day,
An immanent display, for the world to share,
As it seeps below horizons, to end the day,
Only to share light, so that others may see,
The beauty of the sunset for all who care,
Up above the clouds, that shadow the light,
The rain, the snow, and the elements that blind,
That magnificent glow, that Brightens our world,
Another sunset awaits, just to share its light,
B.J. Ayers 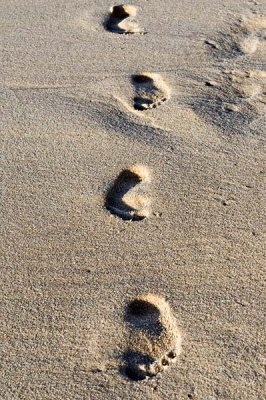 Footprints
One night a man had a dream. He dreamed
he was walking along the beach with the LORD.
Across the sky flashed scenes from his life.
For each scene he noticed two sets of
footprints in the sand: one belonging
to him, and the other to the LORD.
When the last scene of his life flashed before him,
he looked back at the footprints in the sand.
He noticed that many times along the path of
his life there was only one set of footprints.
He also noticed that it happened at the very
lowest and saddest times in his life.
This really bothered him and he
questioned the LORD about it:
"LORD, you said that once I decided to follow
you, you'd walk with me all the way.
But I have noticed that during the most
troublesome times in my life,
there is only one set of footprints.
I don't understand why when
I needed you most you would leave me."
The LORD replied:
"My son, my precious child,
I love you and I would never leave you.
During your times of trial and suffering,
when you see only one set of footprints,
it was then that I carried you."
written by Carolyn Joyce Carty 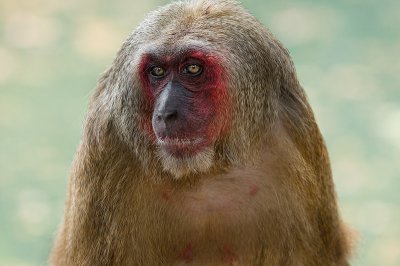 Over Blushed
Sorry guys not really my usual portraiture shots of beautiful women......instead I think it made a good subject to shoot. He was a very shy monkey.....he over blushed....:D
Please click on the thumbnails for the picture - 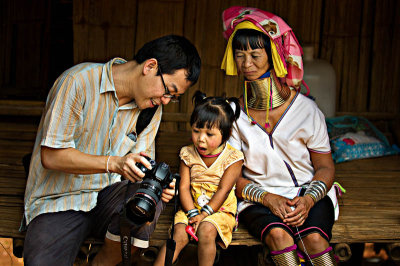 Simply Priceless
This is what I would call priceless expression captured of the little girl looking at her own picture on the DSLR. At the corner you can see the lady with the long neck also taking a peep and at your left a personal friend who has obviously taken her picture and showing it to her. This picture was taken in the `long neck' tribal village in Chiang Mai, Thailand. I can't remmeber the location of the place..but I suppose there aren't many as it's getting extinct. I suppose the people only wear those rings on the necks for commercial purposes to entertain tourists.....I just feel sad for the little girl having to wear it too! For them it's beauty....like having some tribes who would wear stuff around their mouth and ear lobes to make them long and wide! For some of us, it's scary sight and probably go `ewwwwwww'..........
Beauty is in the eye of the beholder. 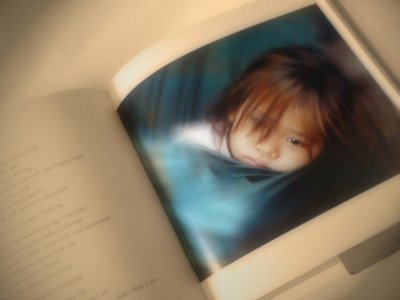 Rocking Myself To Sleep
This image has been one of my top hits in Pbase. I particulary treasure this shot as it is one of my greatest passion to shoot children. Finally it is published in Daniel Mack's latest book - The Hammock
which was released recently in June 2008 by Stewart, Tabori & Chang New York. Please click on the thumbnail for the picture - 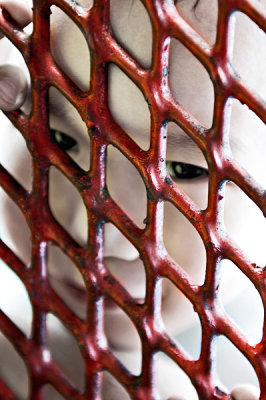 Behind Bars
It's interesting to take your subject through bars.....gives you a different feel totally. By the way I did not cage him up! This was taken from bottom up where he was looking downwards from the play equipment! You might want to take a look at 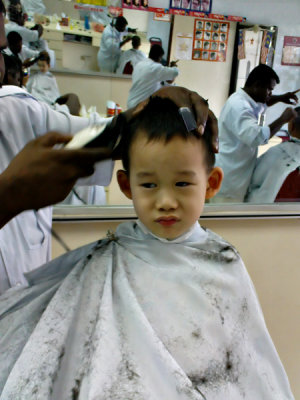 No More Hair!
A typical barber saloon.....yup Prince II having his haircut. Check out Prince I photo here,