Seppeltsfield and Marananga are home to one of the region’s most scenic drives. The huge date palms lining the road were planted to provide work for local families during the depression and now provide a stunning landscape popular with photographers. The Seppelt Family Mausoleum, built on the highest hill overlooking the Seppeltsfi eld Valley, was completed in 1927 by the employees of B Seppelt & Sons. It is now the repository for a majority of the Seppelt Family descendants. You can learn the fascinating story of the family by taking one of the tours at nearby Seppelt Winery. Another landmark, Gnadenfrei Lutheran Church has been servicing the community of Marananga for 130 years and visitors are welcome to Sunday morning services and community events. This part of the Barossa is home to Maggie Beer’s Farm Shop where you can sample and buy the locally made produce and books of this well-known Australian food identity. If you get there in the afternoon, don’t miss the cooking demonstration at 2pm – there’s one on everyday. For lovers of events, Shakespeare in the Vines has become an annual midsummer performing arts treat on the Barossa calendar each January at the Seppelt Winery. And equally as popular are the Australia Day (January 26) celebrations at multi-award winning Whistler Wines. An earlier gallery (featuring the Herbig Tree) of mine can be found here https://pbase.com/yvonneii/barossa_area 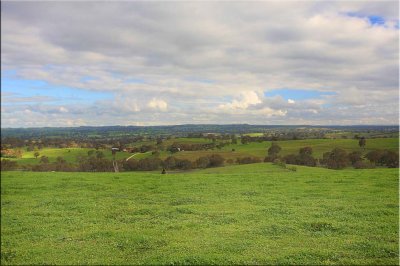 View from the Lookout
As you can see, I took quite a few shots from the Eden Valley Lookout. Dick isn't one
for stopping when there's good photos to be had, I have to do the best I can when he
does stop and wait! 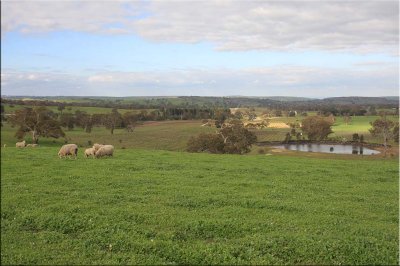 Another view from the Lookout
A very pretty time of year and day when we decided to stop here and show Mum
the view - though I don't think she even got out of the car. At least I
got a chance to take a few photos before some heavier clouds came over. 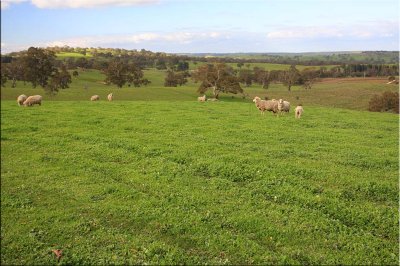 Sheep on a hill
The Barossa Valley has other pursuits as well as growing vines for wine as you'll
see from this photo. This photo was taken from the Eden Valley Lookout, a relatively
new enterprise which is still under construction. 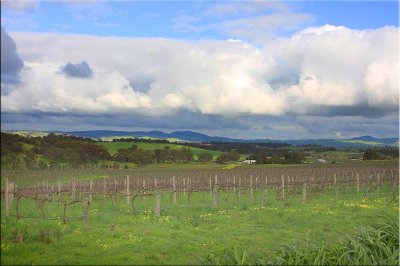 Vines
Very pretty area nestled into the nearby hills, an area famous in Australia
for the German heritage and the growing and processing of wine grapes.
click on thumbnails for full image