Two years since I took part in a CHALLENGE - the last time I participated hardly anyone commented
so I gave up... half the fun is the comments, so I hope the participants DO make comments this time around! 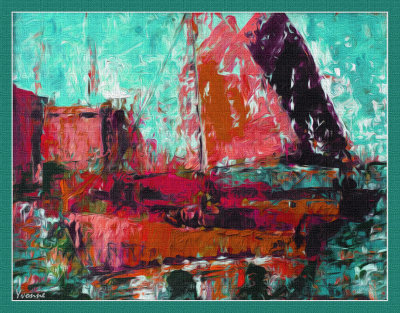 "A Painted Surface"
A painting by me from the 70's when I painted in oils with a painting knife
I used to like painting in abstract as you can see from this entry. I
enjoyed playing around with digital Photoshop..:) 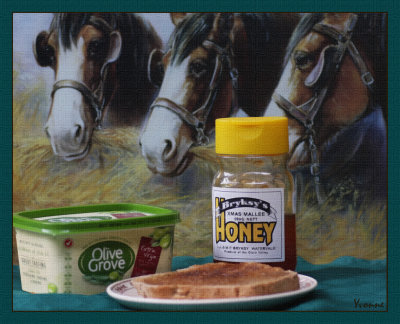 "Something Sticky"
A pot of honey, and some on a slice of toasted bread made by Dick yesterday, and
it was the last slice left. I have been without a computer all day until our
son-in-law came and got it up and running again - we're so lucky eh! 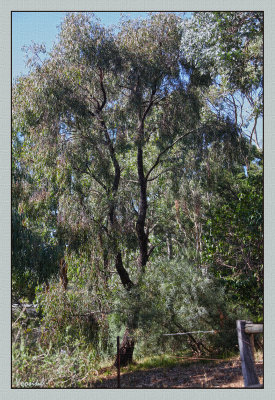 "A tree or palm leaf"
This is similar to the Eucalyptus sideroxylon that grows up by our front gate, we have 5 of these growing
along our front fence among other trees.. we have a very long front fence.
The flowers of the sideroxylon are pretty, pink and white, and I love the textured
black bark. I have planted other sideroxylon in other parts of the garden as well, which this is. When the
various parrots visit the tree in flower there is often a carpet of blossoms under the trees. 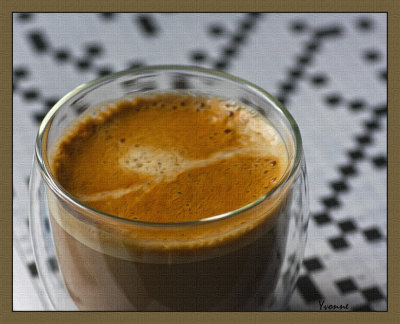 "A Glass of Something"
This is a double shot soy latte, I made it myself in my coffee machine and
I enjoy it while working on my crossword.. the glass is double glazed.

"A Wind Chime"
More of a shadow play that caught my eye yesterday when we had some sunshine.
We have 2 hanging on our west side balcony and they indicate when the wind
blows from the north-west.. in mono (tinted slightly blue) ..
That is a little blue fairy wren pictured on the wind chime. 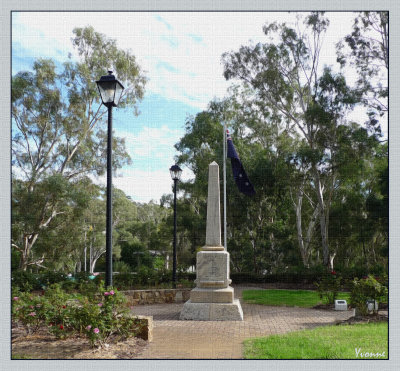 "Our Australian Flag"
Featured on a local memorial to the fallen, celebrated on ANZAC Day, though
this photo was taken a week or so ago. Today has been cool, dark and damp
and is now raining - typical for the 25th of April. 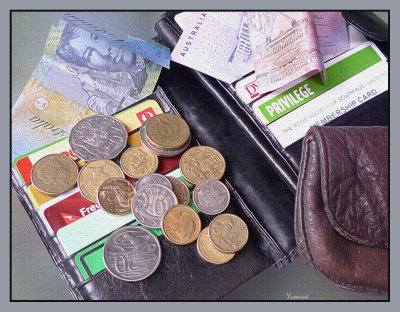 "Our Currency"
I had a problem with this topic, Photoshop would not allow me to edit currency notes
but I overcame that by taking a photo from a distance, then cropping so that
the entire note wasn't featured, and I removed the numbers from both notes
that I featured here. I think others have had a similar problem. 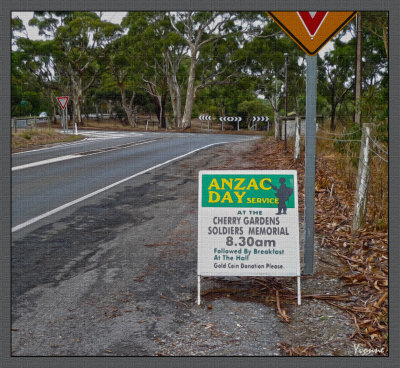 "Street Advertising/Billboard"
I think this counts as a "Billboard", it is installed at this intersection each
year to advertise our area's celebration of ANZAC day, held annually on the 25th
of April. Best viewed in original format. Note the litter from the eucalyptus trees,
although "evergreen" they drop leaves, bark, twigs year round, they're very messy trees. 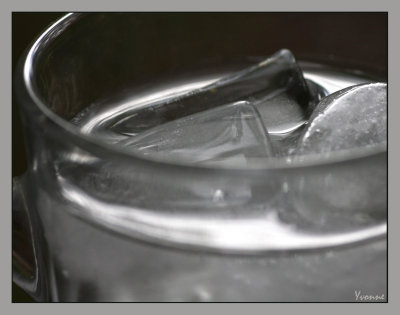 "Something Cold"
Ice to cool yourself down when the temperatures climb. 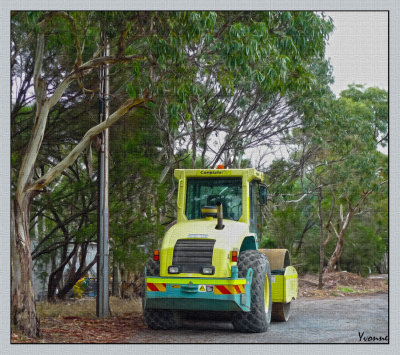 "A Yellow Car"
Well, not exactly a car... but it is yellow and it was parked around the corner from
where we live and has been there for 3 days now. I assume some road works may be
about to begin on our road very soon. 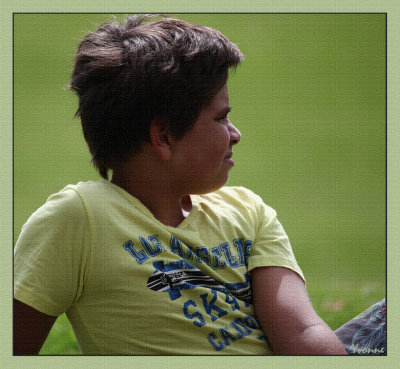 "A Candid Photo of a Stranger"
I had my zoom lens on during the picnic and captured this photo of a young
lad watching our family playing on the oval, possibly wondering if he
could join in. Unfortunately my camera started playing up at this point
and I changed over to the little Lumix for the rest of the picnic. I'll
have to try and work out the problem before I use that lens on the cam next. 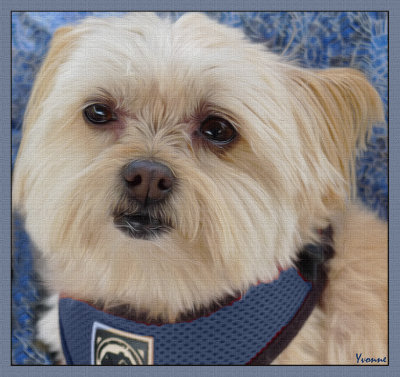 "Something Sweet"
A dear little girl-dog named "Honey" who hardly left her mummy's lap the
whole duration of the picnic.
click on thumbnails for full image