Here's a rather detailed sequence of photos showing the construction of a d'Arsonval meter movement.

The panel style Volume Unit Meter measures 25-1/2" wide, by 23-1/8" tall, and is 15" deep. Weight is approximately 68 pounds.
Fashioned after the classic Weston Model 862 VU Meter found in early generation broadcasting studios and recording equipment, its housing is constructed from laminated wood and polished to give the appearance of plastic or phenolic.

The internal d'Arsonval meter movement looks and works identical to an actual prototype. A precision wound 600 ohm coil mounted on an aluminum bobbin pivots between 2 sapphire jewel bearings and is electrically connected with phosphor bronze springs. The permanent magnets were adapted from a 3/4 HP NEMA 56 frame motor, and its meter ballistics mimic an actual meter when driven with adequate D.C. voltage. Approximately 2 volts D.C. drives the huge 12 inch needle to full scale.

The first photo titled "VU Meter" was taken just before placing the front cover (window) over its internal workings.

In the following days (April, 2008), the meter was displayed at the North American Model Engineering Exposition.
During that exhibit, the occasional "on looker" would ask why I even built such a thing. Someone eventually
answered the question for me..... before I was able to respond. He said, "Because You can."

As you follow the sequence of photos, you'll see the various stages of its construction.
There were numerous obstacles that had to be re-thought or overcome in making such a thing.

It was fun building. 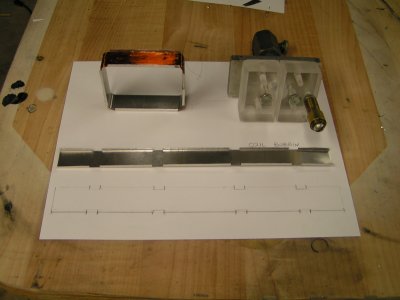 79
First wound coil at upper left, coil winding form at right,
and strip of soft temper aluminum laid out ready to be shaped
around winding form for a second attempt.
0 comments leave a comment 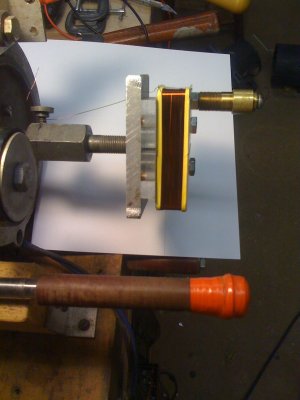 80
View of finished coil. To alleviate potential for the bobbin chafing
the magnet wire, identical rubber bands were placed at each edge.
As the coil was wound slowly around a "zillion" times to achieve
a measured resistance of 600 ohms, it was coated with 2-part epoxy.
0 comments leave a comment 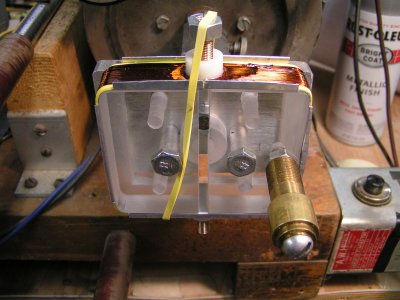 81
Each pivot point is a stainless steel sewing needle cut to required length.
The needles were pressed into a drilled hole on the end of threaded 1/4-20
bronze material which was threaded into the white plastic component glued
to the coil assembly. The entire group of glued parts were allowed to fully
cure before being removed from the coil form.
0 comments leave a comment 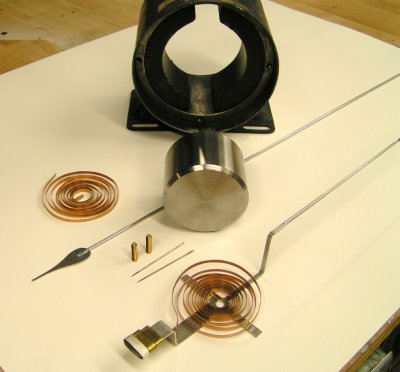 82
The indicating needle in the foreground is from the original meter movement I built
in 2002. The two threaded parts standing upright are the sapphire jewel bearing assemblies.
0 comments leave a comment 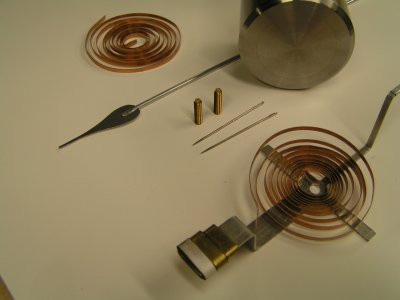 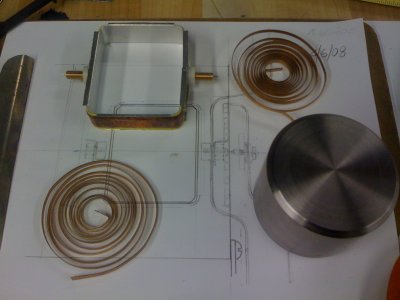 84
Parts for the meter movement nearly ready for assembling into a working apparatus.
0 comments leave a comment