Each spring I travel hundreds of miles throughout the Texas Hill Country in search of fields of Texas Wildflowers - reds, blues, yellows, purples - you name it. Our beautiful flowers come in all shapes and colors. The most popular, of course, is the Texas Bluebonnet, the state flower of Texas. Others are just as striking, including the Indian Paintbrush and Indian blankets, along with fields of gold coreopsis. Just find some dirt roads and head out in the months of March, April, and May, and you'll probably find some color.

I'll try to post on here the best places and roads I've found for these Texas wildflowers. So stay tuned and check back often. 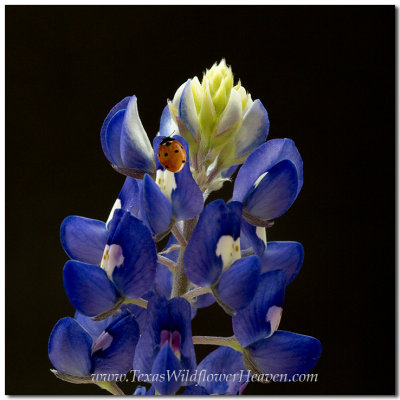 Texas Wildflowers - Bluebonnets and Ladybugs
I waited for a while for this ladybug to be still while crawling around on the bluebonnet. I think bluebonnet images are among my favorites of the Texas Wildflowers, and when I found a little red ladybug crawling around on the blue petals, I grabbed my macro lens and waited until he was still. This bluebonnet picture with a ladybug was my reward for patience.
0 comments leave a comment 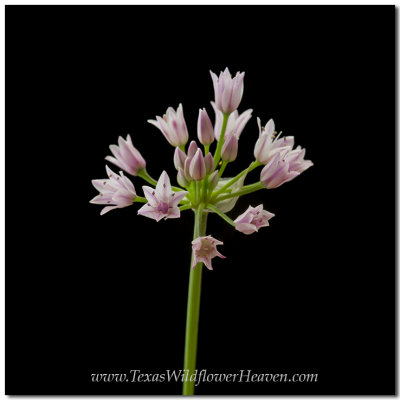 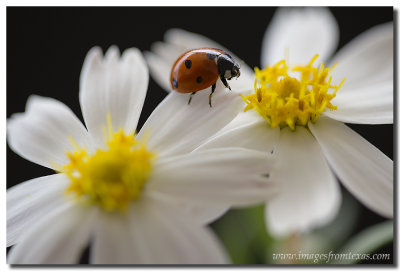 Looking for Bluebonnets and other Texas Wildflowers - Report from the road
I spent some time these past few days driving around the Texas Hill Country. Along Highway 71 near Marble Falls, there are bluebonnnets appearing along the roadsides – not enough to take grand bluebonnet images, but enough to notice, which is nice. From first inspections, the coverage this year looks to be sparse – at least right now.
On 281 just north/east of Marble Falls, the old barn/house that is on the left side of the town as you leave does not have any blooming bluebonnets yet. It appears there may be some coming, but probably not like it was in 2010.
On a side note… with the construction ongoing at the bridge in Marble Falls, traffic is a complete disaster. It took me over an hour to cross the bridge. Everything is funneled down into one lane each way and on Sunday afternoon, it was a big mess. Avoid this area in times of high traffic use. Hopefully it will get better.
I’m hearing reports of Texas wildflowers appearing south of Austin. A friend told me bluebonnets and other wildflowers were appearing, including firewheels, phlox, and paintbrush, but nothing worth the drive yet… maybe in a week or two.
In the meantime, I have a bluebonnet that has appeared on my land (only one!), along with Indian Firewheels and Blackfoot Daisies. Yesterday evening I followed a ladybug around and took a zillion images of him on the Texas Wildflowers, and I even got a few pictures of wildflowers I thought were keepers. Here is one.
0 comments leave a comment 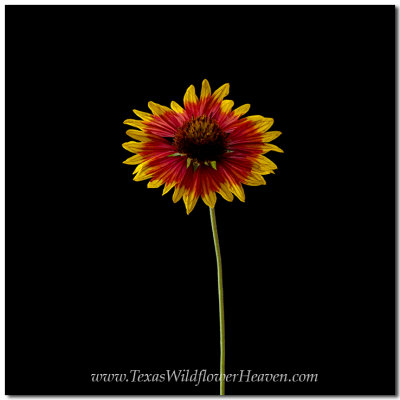 Texas Wildflower Portrait Project
Last year during our Texas Wildflower season, one of my projects was to photograph portraits of the wildflowers blooming on our land. I did not want to disturb the flowers, but wanted to isolate them with a black background. Here is what I came up with!
First, the conditions had to be right. The wind had to be absolutely calm and I would only shoot in the early morning or late evening when the light was soft and fading. I took a 30x20 black piece of cardboard. I would drop it in behind the wildflower I wished to photograph, trying to gently pull the other wildflowers around it out of direct contact. Using the tripod and a macro lens, I focused and captured the image using a remote control. Sometimes the exposures would last up to 5 seconds because the light was so low.
It would often take several attempts to get exactly what I wanted. Even the slightest movement took away the sharpness and focus.
After I had an image I was happy with, I'd transport it back into Photoshop. Using adobe bridge, I used the black slider and turned that black background into absolute black while maintaining the brightness and color of the chosen wildflower. I'd also either clone out or crop out any flowers surrounding my subject, leaving a clean black background with my one Texas Wildflower subject.
Here is an example of my Texas Wildflower Portrait project... An Indian Blanket image...
2 comments leave a comment