I have now undertaken five different tours of New Guinea over the past 4 years, and it remains one of the best birding destinations on Earth in my opinion. The birds there are like nothing else: kingfishers with bills like shovels, bowerbirds that look like they've been put on fire, cuckoo-shrikes daubed in gold instead of grey, and that's not mentioning the most amazing birds of all, the outlandish birds-of-paradise. I hope this small gallery gives a feel for just some of this? 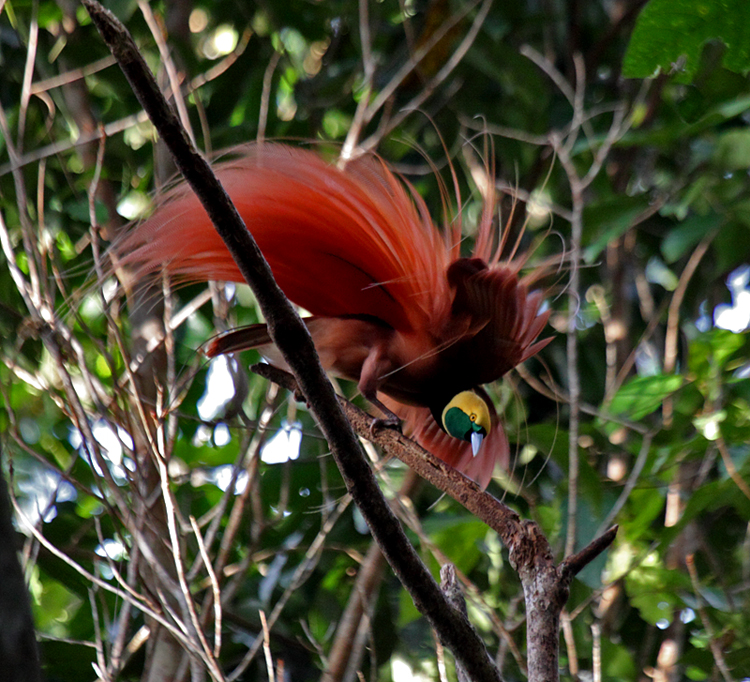 Raggiana Bird-of-Paradise
There can be few things on Earth more electrifying than seeing one of the birds-of-paradise in full display mode. Varirata NP provides a great chance at getting up close with them right near PNG's bustling capital, Port Moresby. A must-see event.
9 comments leave a comment 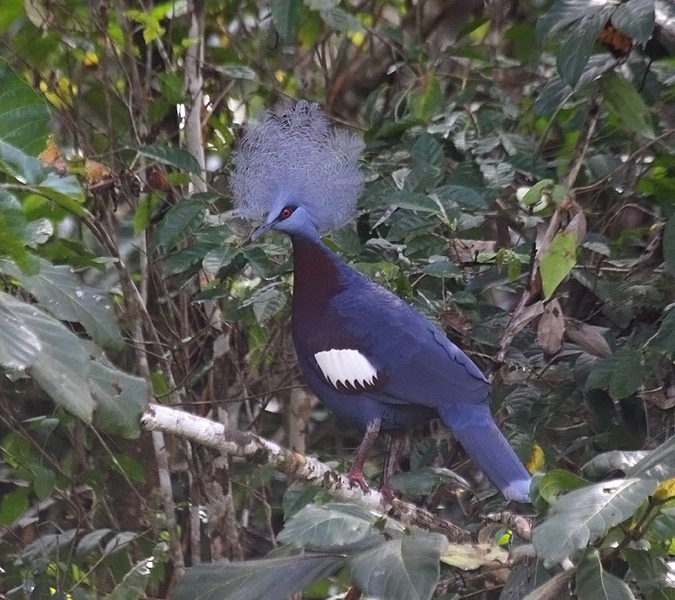 Southern Crowned Pigeon
This particular bird was voted for as the bird of the trip. At the size of a Golden Eagle this is the largest pigeon on the planet. Hopefully with this picture you can understand why it is such a phenomenal bird?
2 comments leave a comment 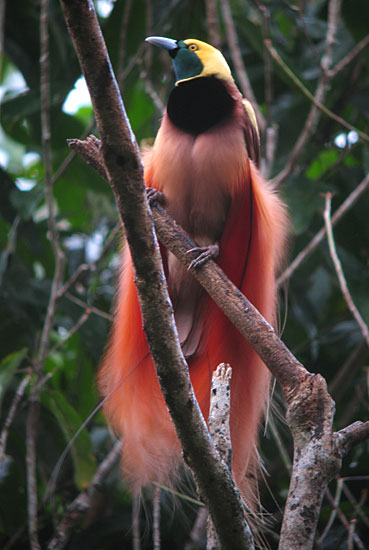 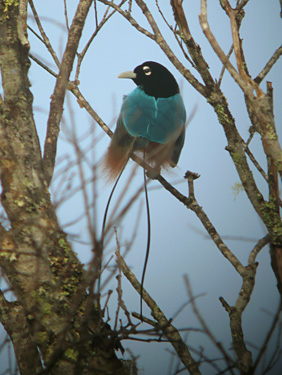 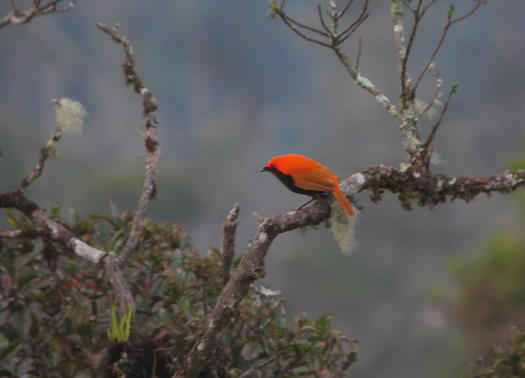 Crested Satinbird
Formerly known as Crested Bird-of-paradise, this has now been placed in a newly recognized family, the Satinbirds.
This orange blur screamed into our view at Kumul Lodge in the highlands of New Guinea, just a short time after we began surveying their legendary garden for the very first time. That kind of thing tends to leave a mark on you.
1 comment leave a comment 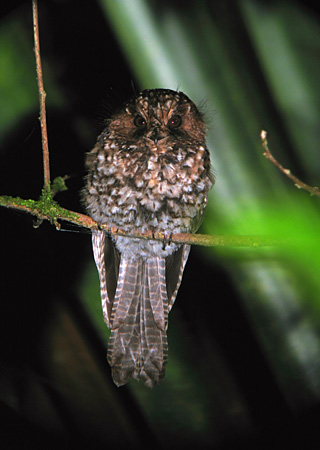 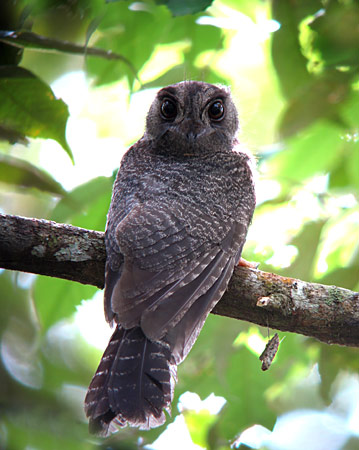 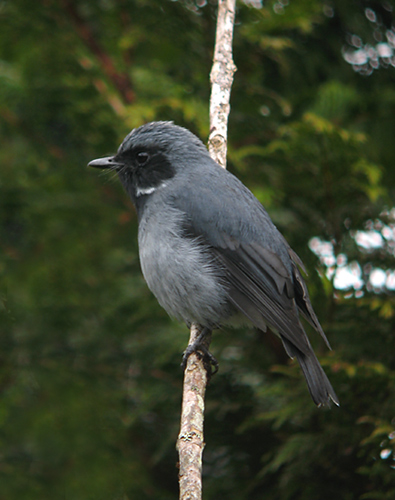 Black-throated Robin
This bird was found singing above the main car park in Kumul Lodge in the middle of the day - a trick it nicely repeated for me in September 2008.
0 comments leave a comment 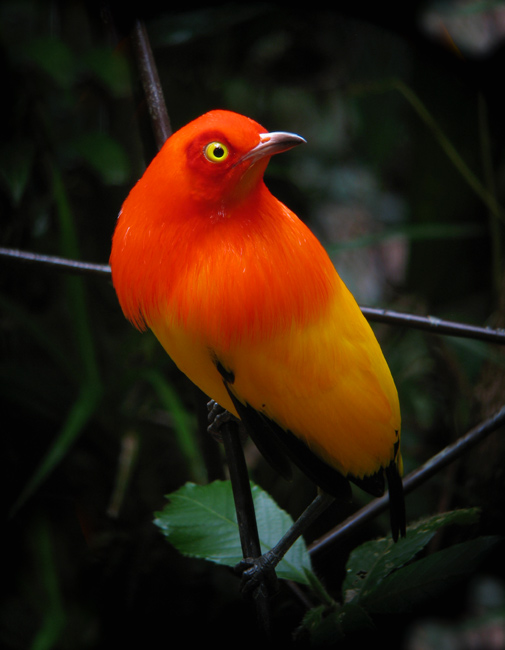 Flame Bowerbird
To date this is still one of my favourite shots I have taken. For three reasons - at the time I took this the bird had only recently become available to the general public at bowers, allowing rare close up, photo opportunities of a bird that had until then graced many people's lists as merely a shocking flyover. Secondly, when we visited a blind in order to get this extremely shy bird coming into its bower, we had such a restricted view that only one person could get their scope lined up on the bird at a time. This led to the extremely uncomfortable, and gut-wrenchingly frustrating experience of having to watch my friend Keith Barnes racking up shots of the flamed one, while I was dying inside next to him, seeing magic photo opps drifting agonizingly away from me. Keith in an act of extreme kindness and generosity though handed over the use of his 'scope to me. I think this was above and beyond the call of duty, as then I too could live the 'digital dream' of getting this magic bird on disc. Thirdly, and not the least important of course, is the ridiculously stunning bird itself. Quite simply it is one of the most dazzling birds on Earth, and one of my all time top birds. Nothing prepares you for the color of this beast, and to get a photo as well was way more than I expected on my first trip to the fabled island of New Guinea.
7 comments leave a comment 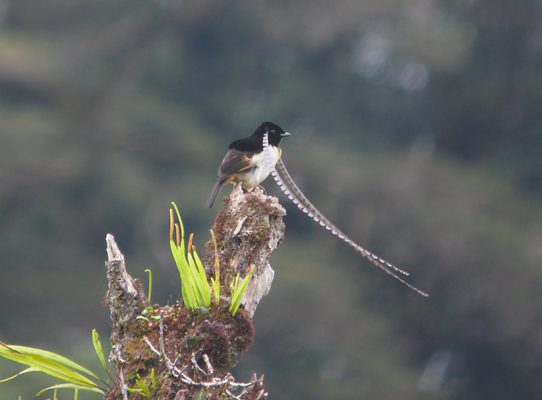 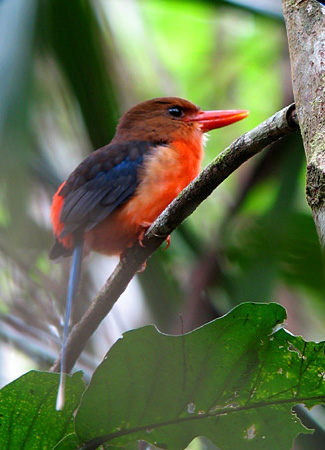 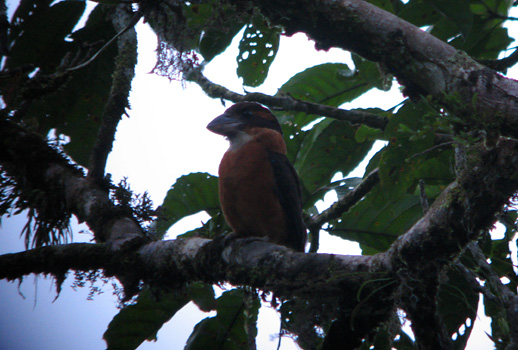 Shovel-billed Kookaburra
There is something really special about this bird. Kingfishers are an overcrowded family in terms of stunners and mouthwatering species, but this one sits well apart from the rest. Not exactly stunning this one but charismatic, and like many things in PNG it breaks the mould, having a monster bill that it uses bizarrely for digging into the ground in a distinctly unkingfisher-like fashion.
Looking for a Shovel-bill is always a tense and nervous experience, as they seem to call for just a short, agonizing period at dawn and dusk. So most of the time you are searching for one it is in the half light of dawn, when you cannot help but feel there is a nervous race against the clock, before the bird falls silent and becomes nigh on impossible to see thereafter. We had arrived at the most reliable site in the world for the species under cover of darkness. We simply could not take the chance of arriving too late in broad daylight, to be greeted by a wall of silence and no kookaburra. So there we were standing around on a muddy forest-flanked road at night. Not long after our thoughts of this massive-billed kingfisher were temporarily sidelined when a Papuan Boobook began calling above us, and the spotlight was quickly swept into action. As this smart 'creature of the night' glared back at us with its glassy eyes the daily dawn army of Shovel-billed Kookaburras jolted us out of the owls stare. The torch was removed from the owl and the whole of our group began combing the trees on the roadside for any one of the sources of this atmospheric New Guinea dawn chorus. As we spread ourselves and searched the trees the light of morning grew ever brighter, and with this our hopes of getting the bird before they fell silent once more ever dimmer. One of the characteristics of searching for this superb endemic is that you never hear just the one, in fact at times it feels like they are all around you, mocking you. Therefore, we chased after one, and when we approached that sound another would pipe up at another spot and draw us over to another bank of trees. Once we had been pulled this way and that a number of times it starts to creep into your mind that maybe they are actually all working in cahoots, and that this is a clever decoy strategy of some kind. Our nerves were frayed and thoughts were looming large of the need to face another dawn on site, when Keith Barnes announced he had its hefty bill in his sights. It was not there for long, and indeed the photos it allowed were not exactly spectacular, although my first encounter with this bird was nothing if not thrilling.
1 comment leave a comment