Normally at this time of May I would be pursuing migrating birds, spring wildflowers, or insect life; but today the unseasonably cool temperatures, the heavy overcast and occasional flurries, and gale winds made for terrible conditions for just about any living thing. The probability of seeing any insect life today was zero and the probability that I would observe a fallout of migrating birds or get a sharp and richly colored photo of a wildflower in the brisk winds and heavy overcast was similarly low. But I still wanted to get out, so I thought I would go exploring instead.

Prior to setting out on a voyage of exploration I often look at satellite and air imagery to scout out possible routes; look for stands of vegetation, geological features, wet spots, etc that may be of interest; pinpoint possible locations of ruins and other signs of former land use; and look for landmarks that may help guide me when I go off the trail. This morning when I was doing just that I noticed what appeared to be an older deciduous forest in an area of the greenbelt I had never considered exploring before. There appeared to be a trail heading in there, old fencing of some sort, and then I saw something that got me packing my bags right away.

A few years ago I heard about an abandoned homestead in this part of the greenbelt. I have since wondered where it was - all I heard was something along the lines of “a laneway that leads to spot where an old homestead used to be” - and what I saw in the air image led me to believe that I found this old homestead. In the air image of the area I saw what looked like a ruined structure, flowering apple trees, and open fields with perfectly straight birders. What follows are images of what I found when I went to explore the site. 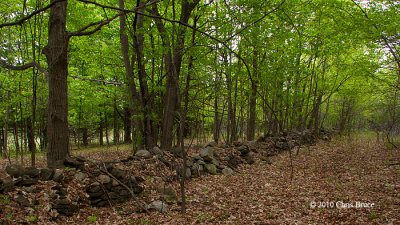 Stone Wall
Along the way to my destination I came across this lengthy stone wall. Stone walls are not uncommon sights in the greenbelt, but none of the stone walls I have come across so far are as long or as well preserved as this one was. All the other stone walls I have found so far are broken up into smaller segments and overgrown with vegetation. Although not visible in this photo, this stone wall continued on as far as I could see and was in remarkably good condition for its age.
1 comment leave a comment 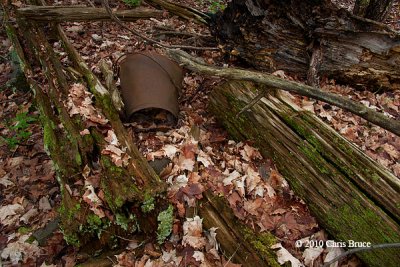 Discarded Bucket
I walked along the entire length of the stone wall shown in the previous photo, and near its end, I found, at what would have been the corner of a field, this bucket lying among decaying split-fail fencing. Near the bucket were a number of very old Firestone tires and inner tubes and a metal rod.
0 comments leave a comment 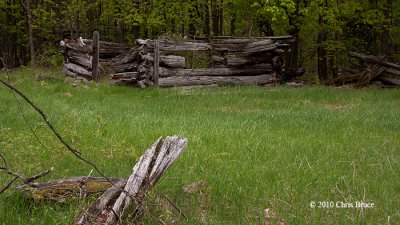 Log Outbuilding Ruins I
I couldn't believe my eyes when this structure came into view. I couldn't believe that a ruin this substantial existed in the greenbelt. I would have thought that someone would have come along and vandalized the site at some point in the past decades. Not so. Perhaps the site has been spared from vandals because of its secluded location away from the official trails. To access the site one must follow a informal footpath off the main trail, cross a rural road, and then continue for a distance along an overgrown laneway.
This structure appears to be an outbuilding of sorts, a shed perhaps. There was a similar but large structure in the woods behind this structure. Scattered through out the woods were all sorts of relics.
1 comment leave a comment 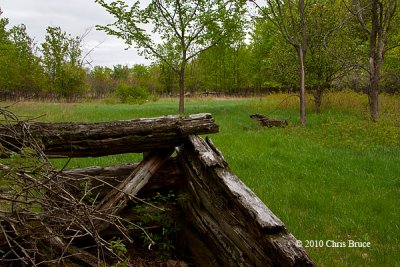 Looking Out
I took this photo while I was standing inside the structure shown in the previous photo. I am facing a small clearing that is separated from a much larger clearing, an abandoned field, by a stone wall and a row of trees. Behind me is a mature deciduous forest with another log structure, the one shown in the following photos.
0 comments leave a comment 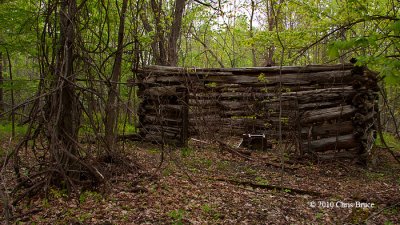 Log Outbuilding Ruins II
This is the structure in the woods. Like the other structure, this one appears to be an outbuilding of sorts. The object on the ground inside the structure is an oven. Also inside the structure was a motorcycle chassis and a discarded Tim Horton's cup, the latter a sign that this site has been visited by others in the recent past. The graphics on Tim Horton's cup were faded, suggesting that the cup had been there for a while, but the cup itself showed no signs of decay. I thought these things were supposed to be biodegradable? Guess not. Another reason for me to scoff at Tim Horton's. Tim Horton's should be ashamed of all the litter out there bearing its name.
0 comments leave a comment 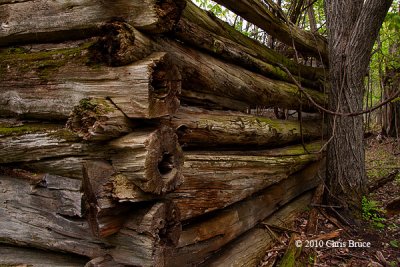 Log Outbuilding Ruins II
A closer look at the structure in the woods. I noticed nails and giant spikes holding the logs together.
1 comment leave a comment 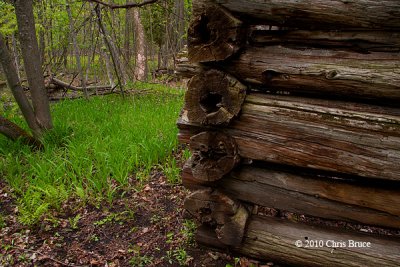 Log Outbuilding Ruins II
Behind the structure in the forest was a large patch of plants with leaves that appear to belong to a member of the lily family. These may have been planted here by the original occupant.
0 comments leave a comment 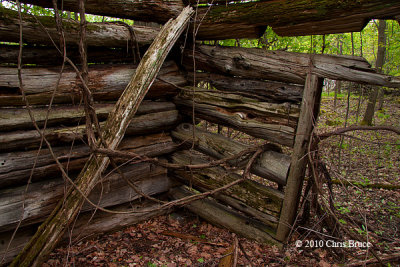 Inside View
This photo was taken inside the structure, "Log Structure II", shown in the previous three photos. This structure was larger than the other structure.
0 comments leave a comment 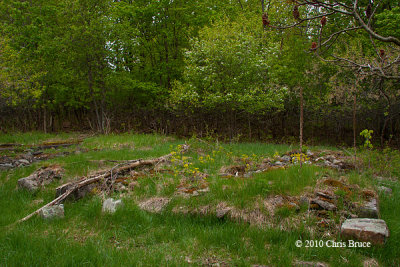 House Foundation
The two structures shown in the previous photos were outbuildings. In the clearing near "Log Structure I" was this cement slab with what appears to be a corner stone of a structure. I think this was the foundation of a residence. The reason why I believe this is shown in the following photo.
0 comments leave a comment 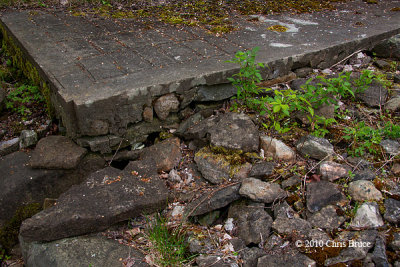 Decorative Stone
The cement slab in the previous photo continued beyond the left edge of the frame. At the corner of the cement slab was this decorative surface, an entry way to a structure? It seems unlikely that an outbuilding would have a decorative surface like this, and that is why I think this may be the foundation of a residence.
1 comment leave a comment 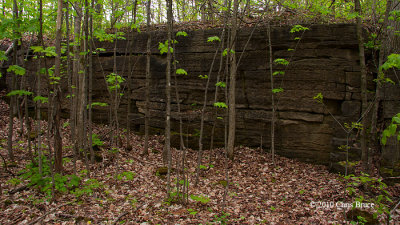 A Quarry Operation?
It appears that some of the rock here was quarried. I don't think this perfectly flat and square rock wall cut into the side of this small hill is the result of natural forces. This was found in the young maple forest behind what I think would have been the residence.
1 comment leave a comment 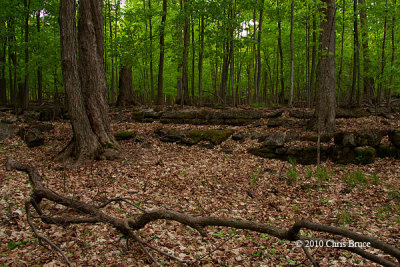 Forest Scene
A scene in the deciduous forest surrounding the ruins. Many of the trees here were young maple trees, but among them were some giants.
0 comments leave a comment