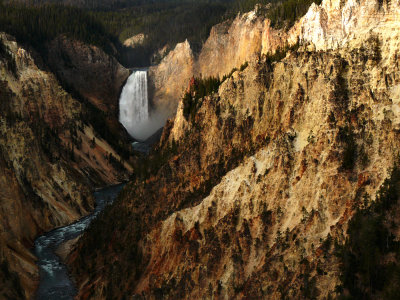 (Example A) Lower Falls of the Yellowstone River, 80mm short telephoto range, horizontal framing
In this example, my objective was to juxtapose the huge waterfall with its spectacular surroundings. In doing so at 80mm, the waterfall becomes small, while the canyon that surrounds it becomes huge. Since Yellowstone’s glaciers melted 15,000 years ago, the Yellowstone River has carved out its own Grand Canyon – slicing a thousand feet into rock softened by ancient thermal fields. This accounts for the unique coloration and texture of the canyon walls, which I feature in this image. The effect is magical, and this reasonably wide view tells its story well.
0 comments leave a comment 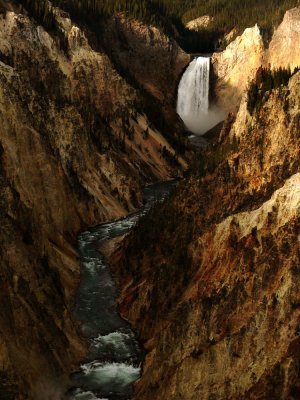 (Example B) Lower Falls of the Yellowstone River, 85mm short telephoto range, vertical framing
I zoomed this example out to a bit longer focal length than I did for the previous example, which allows me to retain the scale of the waterfall and its relationship to the canyon. Only this time, I’ve also turned the camera in my hands, creating a vertical frame and changing the emphasis entirely. Now my story is about the Yellowstone River itself, as it pours out of the waterfall and twists and turns its way down the canyon. It is, in essence, a cropped version of the previous example. A zoom lens is a cropping, framing and magnification tool. By zooming the lens slightly, and rotating the camera from a horizontal to vertical orientation, I completely change the meaning of the picture.
0 comments leave a comment 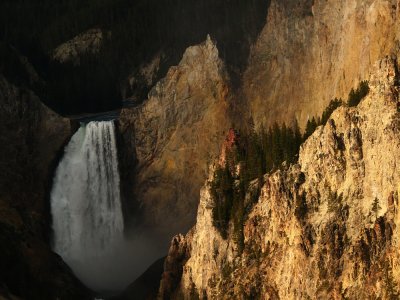 (Example C) Lower Falls of the Yellowstone River, 200mm medium telephoto range, horizontal framing.
For this image, I’ve zoomed my lens out to just under half of its magnification power. The waterfall more than doubles in size as a result of this magnification. We can begin to sense its awesome power. By cropping the scene in half, I abstract it further. The story is no longer about the canyon or the river. It is now about the waterfall itself and its closest neighbors. I am delighted with the subtle change in lighting here – this is the only one of the six images in this gallery where the waterfall is subordinated by shadow to its surroundings. I am always conscious of light placement when I shoot, and in this case, the light illuminates the foreground cliffs to express the beauty of both its color and its texture. Shadows, meanwhile, soften the pair of cliffs in the background. The huge slabs move diagonally away from the waterfall, and echo the shape of the illuminated cliff in front of them. And for the first time, the stands of pine trees become an integral part of the image – their pointed tops rhythmically repeat the pinnacles of the cliffs that surround them.
0 comments leave a comment 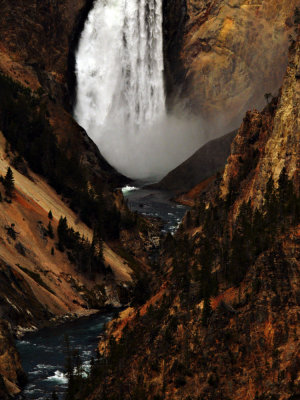 (Example D) Lower Falls of the Yellowstone River, 250mm medium telephoto range, vertical framing
The waterfall dominates this vertical image, as it crashes down into the canyon and sends the deep blue Yellowstone River surging through the gorge. This is the first view of the waterfall as an abstraction. I have removed the top of it, thus increasing the sense of downward pressure. The amazing detail in the huge cliff just to the right of the waterfall is stressed for the first time, and the river returns to the frame as well. This image is more about energy, and less about scenery.
0 comments leave a comment 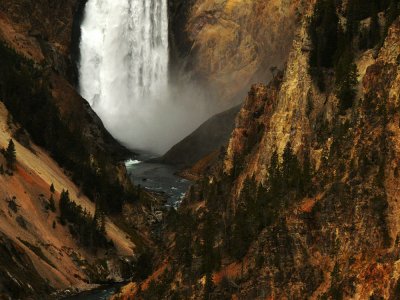 (Example E) Lower Falls of the Yellowstone River, 250mm medium telephoto range, horizontal framing.
This is as abstract as the previous example, but its horizontal framing includes even less of the waterfall and its accompanying cliff and river, and more of the foreground canyon wall to the right of the frame. The abstracted waterfall and the surrounding cliffs are revealed in similar scale here for the first time. All of the elements hang together in perfect balance. Aesthetically, this is the most harmonious image of the set.
2 comments leave a comment 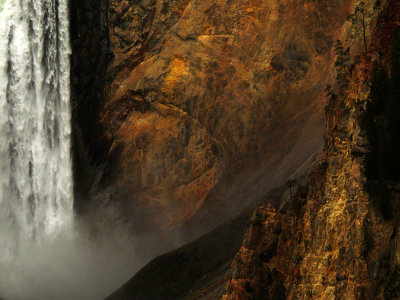 (Example F) Lower Falls of the Yellowstone River, 420mm long telephoto lens, horizontal framing.
I zoom my lens all the way out here, abstracting the scene as much as I can. This is more an image about the titanic forces of nature than it is about Yellowstone, its Falls, or its Canyon. It stresses, for the first time in this set, the unique coloration, texture, and markings of the cliff – the result of a river cutting through rock that was once part of a thermal feature. Today, this ancient rock supports a massive waterfall, but we only see a fragment of it here. I leave the rest of it to the imagination. The texture within this massive curtain of water, and the mist gently rising from its base, speak of its energy, scale, and majesty.
When I had finished making this set of six comparative images, I had to overcome the urge to select a favorite. There can be no favorite, of course, because each photograph tells a different story, and tells it well. Any selection, therefore, must be based on the answer to a simple question: what do we want to say? Once we answer it, we choose accordingly.
0 comments leave a comment