Gallery Forty One: Ruins and wrecks: photographing the rusted, busted past 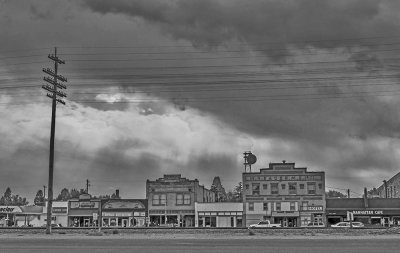 Approaching storm, Shoshone, Idaho, 2018
The largest building in this street scene dates from 1911. Except for the microwave tower standing behind it, and the cars on the street in front of it, everything else in the photo also dates from the early to mid-twentieth century. We look backwards, not forwards here in Shoshone, a small Idaho town between Twin Falls and Sun Valley that is typical of rural towns in the American West whose time has passed. I converted this image to black and white to underscore the grim mood of this image and simplify its structure.
By removing all color, the image becomes stark and unforgiving. The black and white format also simplifies the composition, which contrasts the verticality of the telephone pole and the varying heights of the structures along the street, to the horizontal bands that sweep across the frame: alternating black sky, gray sky, white sky, more gray sky, phone wires, the row of buildings, train tracks, and the dirt foreground.
0 comments leave a comment 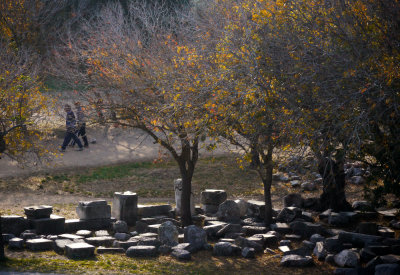 Walking through history, Rhodes, Greece, 2011
This image has three components: a foreground full of ruins, delicate trees soaring overhead, and two people walking in step below them. The people seem to take their surroundings for granted – fields of ancient rubble are common in much of Greece and its islands. I see them as walking through history, both ancient and current. The stones on the ground are static, yet they speak of the past. The trees are dynamic and rich in contrast – those in the foreground are covered in translucent leaves, while the trees in the background are chalky white, devoid of leaves. Some of the branches seem to be leading the people through and out of the image. The walkers see none of this. Their world seems limited only to this moment shared between them.
0 comments leave a comment 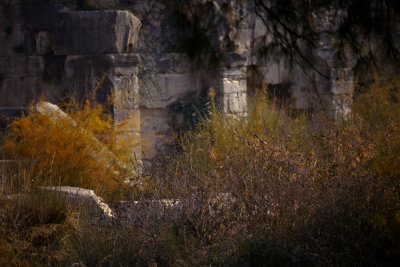 Fallen, Miletus, Turkey, 2011
This image is as much about the relationship of man and nature, as it is about a set of ancient ruins. The remains of what once was the most splendid city in the Hellenistic world are obscured by the lush weeds that envelope them here. The natural world is eternal, while the works of man rise and then fall into decay and disuse.
0 comments leave a comment 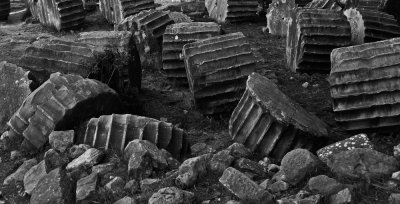 Pieces of history, Pirene, Turkey, 2011
Many of these broken columns are nearly identical in size, which tells us that the original columns were constructed in multiple segments, stacked upon one another. Alexander the Great dedicated the city of Pirene in 323 BC. Its ruins are the most spectacular surviving example of an entire ancient Greek city, intact except for the ravages of time. These broken columns, once part of the Sanctuary of Athena, still lie on the ground where they fell. This Ionic temple was finished during the Roman occupation, and dedicated to Emperor Augustus. The columns are gray in color, and the ground was covered in brownish grass when I made this photograph. By converting the image to black and white, I unify the scene and create a more coherent and timeless image.
( You can see a documentary image of these same broken columns, including a nearby partial reconstruction of the Athena Sanctuary, in Dick Osseman’s pbase gallery on Pirene at:
http://www.pbase.com/dosseman/image/76472615 )
2 comments leave a comment 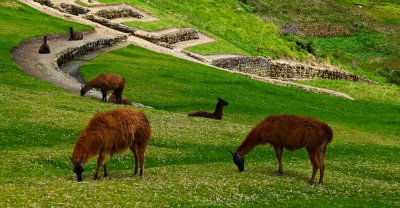 Canari ruins, Ingapirca, Ecuador, 2011
I often find that ruins do not, in themselves, make compelling images. Such was the case of the extensive remains of a 500-year-old fortress built by the Canari, the predominant power in Southern Ecuador, later to merge with the Inca empire. The vast network of stone walls, surrounded by modern plantings and lawns, were educational but not particularly photogenic. However the herd of llamas that tended the grass around the ruins more than made up for pedestrian nature of the ruins themselves. The animals brought the ruins to life for me. I photographed seven of them in this image, waiting patiently for them to arrange this composition for me. I anchor the image with two of the grazing animals. They get smaller as they recede into the background – one of them standing and two resting. Two more llamas rest on top of an old fortification even further back in the scene. The llamas carry the eye through the curving fortress, which meanders through the image, well into the background.
2 comments leave a comment 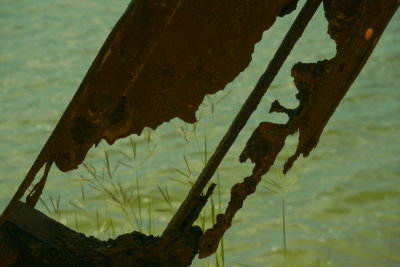 Decay, Devils Island, French Guyana, 2010
This former French penal colony, made famous by the book and subsequent 1973 film “Papillon” with Steve McQueen and Dustin Hoffman, is off the beaten tourist track, and therefore quite difficult to visit. I was delighted that our cruise ship stopped there for a morning, allowing me wander at will for several hours. The prison has been abandoned for 65 years. I found a derrick rusting away on the shoreline, and I made this closeup image of it, emphasizing its cruel, jagged shape by backlighting it. To me, it represented the character of the old prison itself. I framed it as a diagonal, running precisely from corner to corner, and repeating the original directional flow of the derrick itself. I was able to bring out a bit of the rust in the shadows, contrasting its decay to the vitality of the softly focused green water and weeds in the background.
0 comments leave a comment 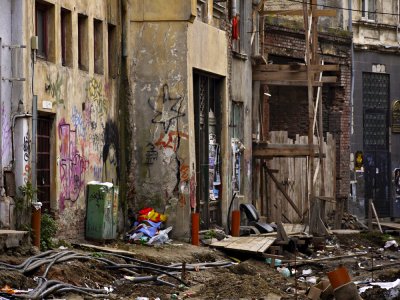 Devastation, Bucharest, Romania, 2009
Bucharest is trying to revive its decaying old city – it has pedestrianized its oldest streets and over the last few years has gutted numerous 19th and early 20th century buildings and is beginning to renovate and rehabilitate them. This street is a ghost city, filled with debris, graffiti, and litter. This image catches an old city in the throes of transition. Someday this street may become a living museum. The only question is when?
0 comments leave a comment 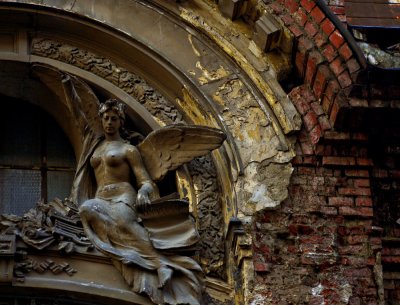 Crumbling angel, Bucharest, Romania, 2009
A hundred years ago, entering this building must have felt like walking through heaven’s gate. Semi-clothed angels looked down from above, granting entrance with a gesture of triumph. Today, the angels are crumbling as the façade itself peels away. The building is still in use – a restaurant occupies the ground floor. Will the charm of the past be restored here? Or is this a last hurrah for a once triumphant angel? This image asks such questions, and leaves to the answers to others.
2 comments leave a comment 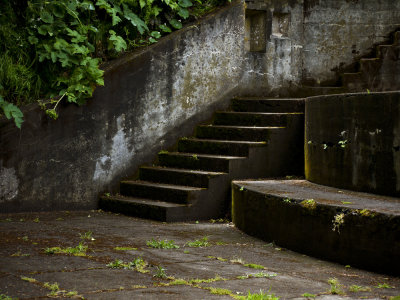 Bunker, Fort Canby, Ilwaco, Washington, 2009
Built during World War II, this bunker defends the mouth of the Columbia River. It was never attacked, but over the years nature has inflicted its own kind of wear on the cement structure. The walls leech chemicals, and tiny ferns are beginning to grow in cracks and crevices. A canopy of heavy vegetation descends from above, threatening to envelope it all. It won’t, however. It is part of Cape Disappointment State Park, and is maintained in a permanent state of “arrested decay.”
0 comments leave a comment 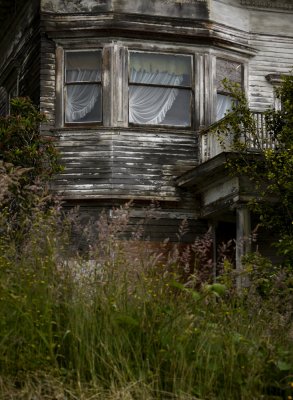 Among the weeds, Astoria, Oregon, 2009
This image is rich in haunting textures – the jumble of high weeds that surround the old house, the weathered boards on its sides, and even the smooth curtains that hang in the old bay windows. There were no signs of life and the only sound was the patter of rain drops all around me as I shot.
6 comments leave a comment 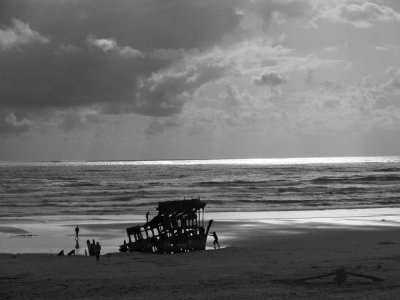 Wreck of the Peter Iredale, Fort Stevens State Park, Oregon, 2009
The Peter Iredale ran aground near the mouth of the Columbia River in 1906. One hundred and three years later, its rusted hull still sits locked in the sands of Columbia Beach. I wanted to express its haunted feeling here, photographing it from a great distance and incorporating a sweep of afternoon clouds. Tourists still swarm over the wreckage, seen here at low tide. Since the thrust of the image is built around the silhouettes of the ship and the people, I’ve converted it to black and white.
1 comment leave a comment 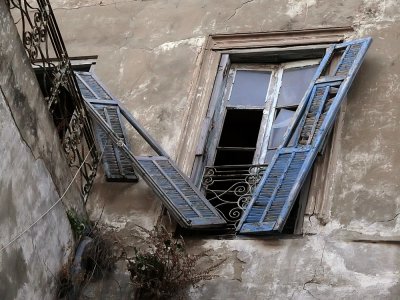 Shutters, Tunis, Tunisia, 2008
The ancient Tunis medina has been thriving for more than a thousand years. It is full of narrow alleys, mosques, markets, and homes – ranging from palaces to crumbling apartments. This dilapidated structure stands at one of the entrances to the medina, its shutters hanging at odd angles, and its façade a home for emerging weeds. I built this image around the diagonal thrust of the broken shutters that carries us through the frame.
4 comments leave a comment