Gallery Twenty Four: The Workplace -- essence of a culture 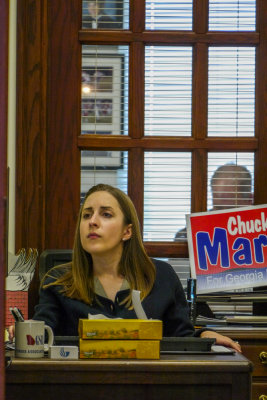 Gatekeeper, Georgia State Capitol, Atlanta, Georgia, 2013
While roaming the halls of Georgia’s capitol building, I photographed this story-telling moment through the open door of a legislator’s office. A member of the Georgia House of Representatives is at work in the inner office, abstracted by soft focus and a campaign sign that covers his face. The emphasis shifts to his aide, who acts as his gatekeeper in the outer office. I place her in sharp focus, and caught her just as she lifts her head from her work and gazes towards an approaching visitor, perhaps a constituent. She expresses a readiness to help, yet at the same time, seems somewhat inquisitive. She represents part of the privacy screen shielding the legislator from public distractions. He is screened by four layers of protection here – the wall of objects on the front of the aide’s desk, the aide herself, the books and poster behind her, as well as a massive wood and glass window, equipped with blinds.
0 comments leave a comment 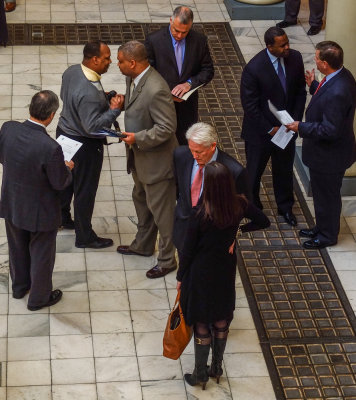 Face to face communication, Atlanta State Capitol, Atlanta, Georgia, 2013
Just prior to a press conference at Georgia’s Capitol building, journalists and politicians get a chance to communicate with each other, one on one. I photographed this group of eight people from an upper floor, capturing three sets of conversation. The image reveals a workplace functioning on several levels -- a news photographer greets an official with a hearty hand squeeze at left, a man seems to listen carefully to the ideas of the woman at the bottom, and another fellow gestures forcefully during a conversation at right. Waiting on the fringes of these three exchanges, two men stand by themselves, intent on reading the documents in their hands while patiently waiting their turn to converse.
0 comments leave a comment 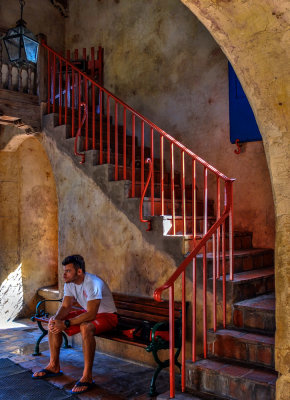 Lifeguard on break, The Venetian Pool, Coral Gables, Florida, 2013
I found this lifeguard seated on a bench at the bottom of one of this pool’s historic towers. I talked to him for a while, and then allowed him to go back to his thoughts as I continued to photograph. He seems to fit comfortably within his environment, which begins at the vintage lantern hanging from the ceiling in the upper left hand corner of the frame. The eye then moves diagonally down the steps, highlighted by the aged stucco base and the red hand railing. The diagonal flow of the railing is echoed by the curve of the arch that frames the stairwell. The lifeguard does not look at us – his mind seems to be elsewhere at the moment. His red trunks, the blue shutter, and the golden reflected light combine to infuse the image with primary colors.
2 comments leave a comment 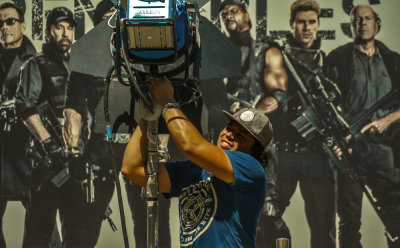 Premiere, Grauman’s Chinese Theatre, Hollywood, California, 2012
This theatre stands at the very epicenter of the Hollywood legend. The footprints, handprints, and autographs of more than 200 movie stars from 1927 through the present day stand in its courtyard. It has hosted three Oscar ceremonies, and dozens of premieres. The day I visited, the sidewalks in front of the theatre and across the street from it were thronged with workers, trucks, lights, and tourists. A major action film was premiering that night, and I was able to compare the labors of light-rigger to the lethal workers on the movie poster behind him. This image is rich in contrasts – the rigger grapples with a spotlight, while the actors in the poster clutch weapons of mass destruction. The actors are grim, while the rigger seems to be enjoying his work. He is a dimensional figure, a colorful figure awash in light and shadow, while the gunners on the wall behind him are flat -- one dimensional iconic figures.
7 comments leave a comment 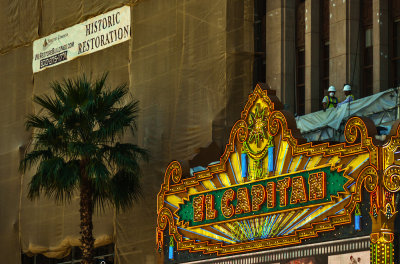 Restoring the El Capitan, Hollywood, California, 2012
The workers are small in this image, when compared to the huge marquee below them, and the building behind them, which virtually fills the frame. This scale contrast makes the point here – the men are small, but the job seems huge. The glittering marquee, which has already been restored, also contrasts to the drab curtain covering the face of the building itself, which is currently undergoing restoration. The sign at upper left. along with one of Hollywood Boulevard's many palm trees, adds context.
0 comments leave a comment 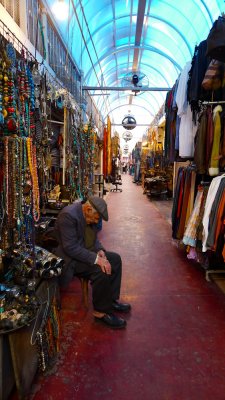 Asleep, Jaffa, Israel, 2011
This huge store is just one of many in Jaffa’s flea market district.
The aisles were empty, and this shopkeeper has fallen sound asleep. He is so relaxed that his heel is slipping out of one of his shoes. I turned my 24mm wideangle lens vertically to stress an aisle that never seems to end. It is lined with richly colored clothing and jewelry, and topped with a translucent blue ceiling, which contrasts to the crimson floor. There were no customers here that I could see, allowing him to quietly lower his head and slumber.
4 comments leave a comment 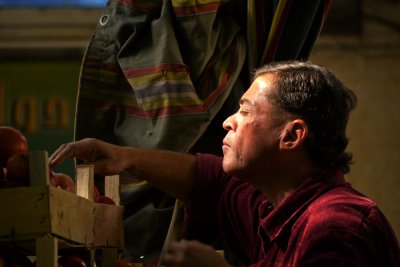 Tomato stall, Aqaba, Jordan, 2011
In market photography, I will often look for the light first, and then shoot whatever it may illuminate. That proved to be the case here. This shopkeeper was checking the quality of his tomatoes, and was moving back and forth among the crates, checking them from different angles. It was not the product itself that attracted me to this situation. I was drawn instead to the striking effect of the theatrical light coming from a nearby window. It illuminates his face, stressing the intensity of his delicate and careful task. I also liked the soft texture of his shirt as well as the soft colors of the canvas backdrop that is partially folded back behind him. It is an image that speaks of care, diligence, and experience.
5 comments leave a comment 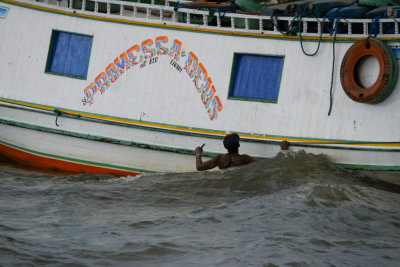 Swamped, Belem, Brazil, 2010
Most photographers prefer to work in good weather and good light. However bad weather can offer advantages to photographers as well. I saw this man treading water during a rain-squall next to his boat at the mouth of the Amazon River. He was holding a tool in his hand, and seemed to be hard at work on his boat as the surging waters of the Amazon delta seem about to swamp him. It is an image about not only work, but also risk. The job at hand may be simple maintenance, yet given this situation, it may not be as simple as it seems. This image is all about man's skill and persistence in the workplace, while dealing with the force of nature itself.
9 comments leave a comment 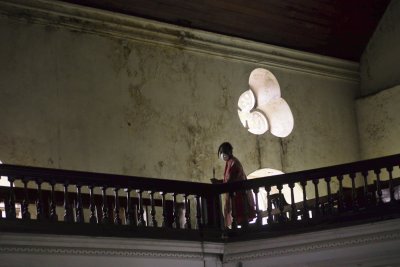 Sweeper, St. Michael’s Cathedral, Bridgetown, Barbados, 2010
Protected by a white mask, this sweeper is cleaning the balcony of this Anglican church, built in 1789, the year that George Washington was elected as the first President of the United States. It replaced an original church built in 1665, and destroyed by a hurricane in 1780. Interestingly enough, Washington himself may well have attended services in the original St. Michael’s Cathedral – his only visit outside the US was to Barbados in 1750. (He visited Bridgetown with his half brother Lawrence Washington, spending four months there.) This image contrasts the deteriorating interior of the old church with the effort of this sweeper to keep it tidy and clean. The scene is illuminated with backlight, coming from the windows behind her. The spindles on the railings behind and in front of her suggest the work that she has done, and the work that yet remains.
0 comments leave a comment 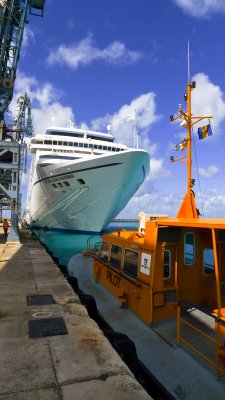 Cooperation, Bridgetown, Barbados, 2010
Using a 24mm wideangle focal length, I contrasted our cruise ship to the pilot boat docked next to it in Bridgetown’s harbor. A harbor is a workplace, and cooperation among its ships is essential for safety. The large boat depended upon the small boat to navigate through the harbor to the pier. The cruise ship is massive, high, and white, while the pilot boat is small, low, and orange. Yet from this perspective, the mast of the pilot boat incongruously seems to rise higher than the huge ship. The cruise ship holds 700 passengers and a crew of 450, while the pilot boat is operated by very few. I also liked the contrast between the turquoise water and the deep blue sky. The diagonal thrust of the pier draws the deep into the image, emphasizing the comparative features.
4 comments leave a comment 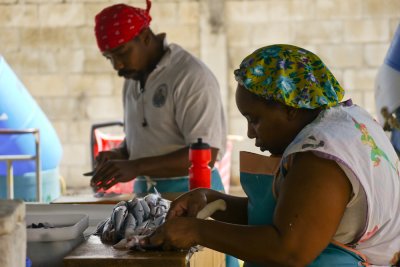 Fish cutters, Municipal market, Bridgetown, Barbados, 2010
The busy hands and attentive attitudes of these fish cutters express the intensity of their work, as well as their concentration and focus. Gutting piles of fresh fish is a difficult job, yet here it seems a task enveloped in the repeating rhythms of the body language. They must pay attention to those sharp knives they use, as well as somehow deal with the monotony of the task and its attendant aroma. The focal point of the image is the backlighted profile of the woman in the foreground. I liked the negative space crackling between her face and the edge of her apron. I also liked the way the red canister, red background, and red scarf create a red triangle around the other worker, providing separation and giving him his own space in the image.
4 comments leave a comment 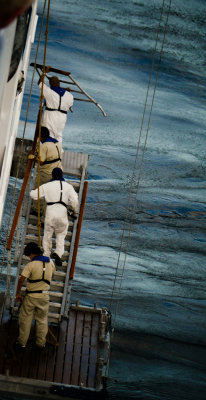 Teamwork, gangway crew, St. Barts, French West Indie, 2011
As our cruise ship was leaving St. Barts, I leaned over my cabin’s balcony to catch a crew of men dismantling a gangway. As the blue waters of the Caribbean swirl just below them, they function as an expert team. It is a drill they know by heart – each man has his place on the steps, which rise towards the leader who hoists a ladder over his head. Teamwork is an essential component of any workplace, and that is the key to this task.
6 comments leave a comment