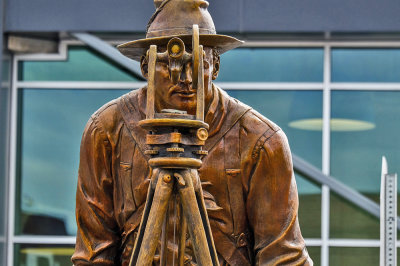 Pioneer surveyor, Twin Falls, Idaho, 2018
A surveyor named John Hayes chose and surveyed the site of the City of Twin Falls, Idaho in 1904. One hundred and fourteen years later, the city finally honored his historic role in the city's history by unveiling a seven foot tall bronze statue of him in the center of Twin Falls. I made this photograph of this statue, sculpted by Dave LaMure, Jr, only three months after its unveiling. LaMure based his sculpture on an iconic vintage photograph of Hayes at work as a surveyor. He says he saw in that photograph's composition a "coming together in purpose...the eye of a surveyor looking through a transit -- the potential of phenomenal magic that could have influence forever."
My own photo of this statue is based on triangular form. The triangle is at the essence of surveying, a craft based on the ancient geometrical principle known as "triangulation." It is a surveying method that measures the angles in a triangle formed by three survey control points. What better way to express the point of this man's craft than to base my photograph on triangles?
This image, a tight closeup of the statue framed from the waist up, is firmly anchored within my rectangular frame by the surveyor's tripod, which is, of course, a triangle. The statue stands before an office building in the center of town, and I used the triangular struts on its external structure to create my own symbolic geometric background. A huge strut echoes the lean of the surveyor's shoulder, and becomes a triangle as it passes behind his body.There are also two smaller triangles formed within those struts on the right hand side of the statue. All four of these triangles bring a symbolic design to my image that echoes the very nature of this man's historic accomplishment.
0 comments leave a comment 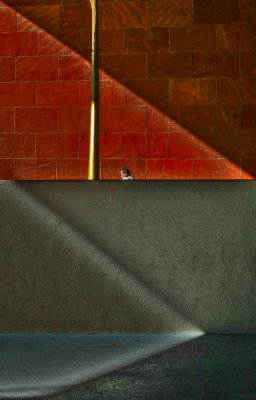 Seven Triangles, Scottsdale, Arizona, 2017
The main entrance the Scottsdale Public Library is always a joy to photograph. It is essentially a huge stairwell that rises around an open atrium. A huge golden quill pen hangs within the stairwell from an overhanging roof. In the afternoon, the sun creates stunning shadows that I use to geometrically organize my image into a zigzagging frame of illuminated stone, containing at least seven complete or partial glowing triangles. The tiny head of a library patron adds a touch of scale incongruity to the scene. This person, caught within a design that rotates around the stem of the golden quill, appears incongruously dwarfed in size by the institution that unfolds around him.
10 comments leave a comment 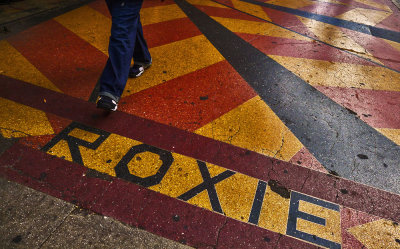 Hard times on Broadway, Los Angeles, California, 2012
The Roxie Theatre was once the only Art Deco theatre on Broadway, in downtown Los Angeles. It was built as a movie theatre in 1931 and has been closed since 1989. The lobby is now a retail store. I photographed the terrazzo sidewalk in front of the theatre to stress the diagonal lines that flow through the image. These diagonals combine here to create a series of triangles that are a primary element of Art Deco design. I waited for the walking legs to enter the frame and add still another triangle to the image. Thousands of people walk over this patch of terrazzo every day, and very few bother to look down at it. The Roxie, fallen on hard times, certainly deserved a better fate.
4 comments leave a comment 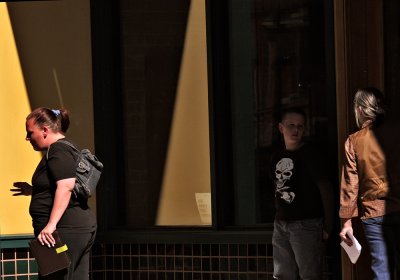 Street scene, Bisbee, Arizona, 2009
I use light and shadow here to create a series of yellow and black store window triangles to turn a street scene into a stage set. The bright yellow triangle at far left defines the profile of the woman who is departing the frame by silhouetting her. She carries a notebook in her left hand, which links her to the woman at far right, who carries papers in her left hand. The second yellow triangle is darker, and acts as a divider, separating the woman leaving the frame from a young boy. This dim triangle also holds a paper at its base, which echoes the paper in the nearby woman’s hand. The young boy is dimly seen, a small onlooker incongruously wearing a grinning skull on his chest. The image is full of questions, and leaves the answers to us.
2 comments leave a comment 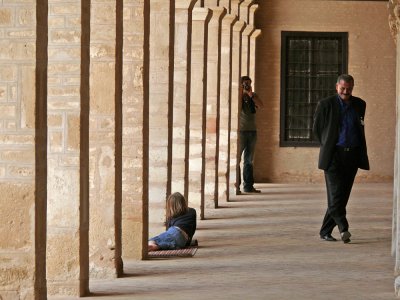 Trio, Kairouan, Tunisia, 2008
A tourist stops to photograph the ancient arcade at Kairouan’s Great Mosque. His smiling guide walks on ahead, while a young girl, relaxing on a mat between the pillars, watches the photographer work. I saw a three-way relationship here, and made this image, linking the gaze of the girl to the photographer and the vantage point of the photographer to the guide. That relationship creates a triangular flow that pulls the entire image together.
2 comments leave a comment 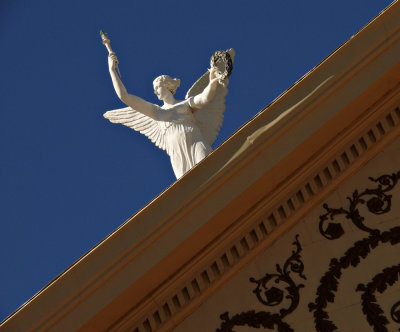 Winged Victory, Old State Capitol, Phoenix, Arizona, 2008
By using the roof edge to create a diagonal line dividing this image into two opposing triangles, I am able to create a striking contrast. The upper triangle is deep blue sky, outlining the brilliant white classical “winged victory” statue that has served as the capitol’s wind vane since 1901. The lower triangle offers a fragment of the cornice of the structure itself, including a portion of Victorian embellishment that characterizes the ornamental architecture of that time. This bold contrast defines the classical style of the building’s architecture and sculpture, and underscores the heroic era in which it was built.
5 comments leave a comment 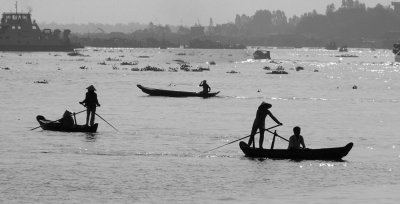 Meeting on the Mekong, Chau Doc, Vietnam, 2008
The three boats in this scene form a balletic triangle -- their movement geometrically suspended by the camera. The early morning light abstracts them into silhouettes, and I've increased the degree of abstraction by converting the photo from color to black and white. It is the triangular composition that makes this image an expressive photograph – the body language within each boat is different, and the triangular arrangement invites the eye to pursue each in turn. The figures in the boats increase in size as we move from point to point, the largest of them steering us out of the image at lower right.
0 comments leave a comment 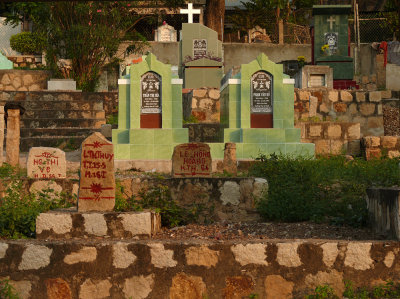 Catholic cemetery, Chau Doc, Vietnam, 2008
A reminder of France's long colonial influence on Indochina, this Catholic cemetery was arrayed like a colorful quilt along a hillside near Chau Doc's famed Sam Mountain, the city's most sacred ground. It is a study in layers, building gradually into a triangle. This triangular composition is not so much a means of guiding the eye from point to point. Instead it becomes pyramidal form, gradually building to the white cross at the top center of the frame and implying a gradual ascent towards eternity.
0 comments leave a comment 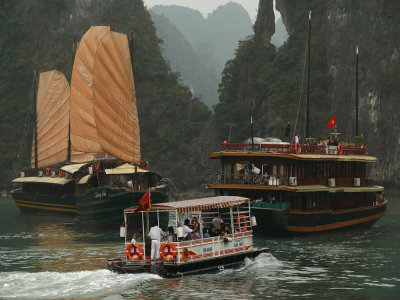 Tourist boats, Halong Bay, Vietnam, 2007
Halong Bay, a three hour drive from Hanoi, is a labyrinthine seascape of bizarre outcrops, isolated caves, and sandy coves. Thousands of tourists visit this site, creating mini-traffic jams such as this. The picturesque junks carry passengers around the bay, while small barges ferry them to sites on shore. I use triangular composition here as well, only I’ve reversed the triangle so that peak is at the bottom, rather than the top. The little ferry is the subordinate partner here, and the bottom position serves it well. My reverse triangular composition is also echoed by the natural triangle formed within the trees at top center.
2 comments leave a comment 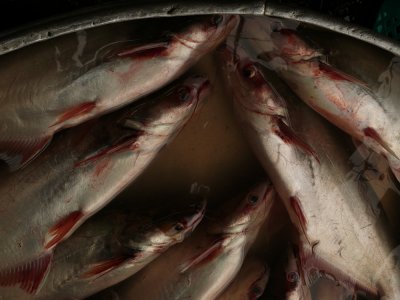 Fresh fish, Vinh Long, Vietnam, 2008
They are nothing more than eight dead fish on a tray in Vinh Long’s bustling market, but by the time I had finished with them, they soar upwards as if they were an offering to the gods. I built a horizontal base by cutting the fish in half with the bottom edge of the frame, and then allowed their diagonal arrangement to merge into a triangle. The triangle was originally upside down, so I rotated the image, making the bottom of the picture, which originally featured the curving edge of the tray, become an arc at the top of the image, drawing the triangle of fish upwards toward its curve. A second triangle appears inside the first – within the negative space at the heart of the display.
2 comments leave a comment 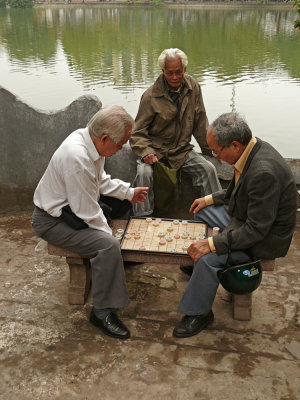 Mental exercise, Jade Mountain temple, Hanoi, Vietnam, 2007
Hanoi residents enjoy board games outside this temple, which stands on a small island in Hoan Kiem Lake in the center of the city. The players and onlooker had already arranged themselves into a triangular relationship. I recognized its value as expression – the man on top, the only one facing the camera, may be on the outside, yet for us, he is the person we most identify with. Seated at the apex of the triangle, he becomes a symbolic referee, the judge, and the jury.
2 comments leave a comment 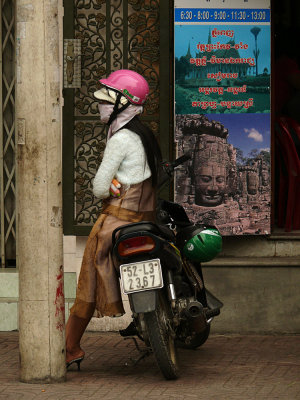 Inertia, Saigon, 2007
Vietnam's new helmet law adds still another layer of cover to the head of this cyclist. She even has an extra helmet in green aboard -- I wonder if it's for her passengers or just color coordination? The poster in the background may suggest exotic travel to Cambodia, but at the moment, this woman is not going anywhere. I anchor her and her motorbike in place with a triangular composition. By sitting on the side of her vehicle, her legs become one part of the triangle, the bike another, and the sidewalk become the base. This image is all about inertia, and the triangular relationship between her, the motorbike, and the sidewalk, keeps it that way. The utility pole echoes her upright posture, as does the poster, creating rhythmic repetition that complements the triangle.
4 comments leave a comment