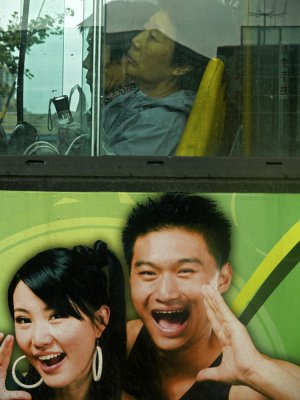 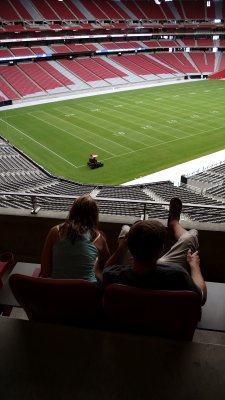 Mowing the lawn, University of Phoenix Stadium, Phoenix, Arizona, 2007
While touring the new 70,000-seat home of the National Football League’s Arizona Cardinals, I noticed two visitors taking a break by watching a groundskeeper mow the football field. I framed this mage to abstract, isolate, and emphasize the relaxed tourists, and create a triple incongruity in the process. The distant tractor cutting the stadium's fully retractable natural grass playing surface is incongruously small compared to the vast arena that surrounds it. I have also created an incongruity by featuring just two people seated within a context of seats intended for thousands. Watching grass being cut is almost as entertaining as watching paint dry. I have turned “grass-cutting” into an incongruous event in a stadium built to host Super Bowls. (For more on this stadium, see http://en.wikipedia.org/wiki/University_of_Phoenix_Stadium )
5 comments leave a comment 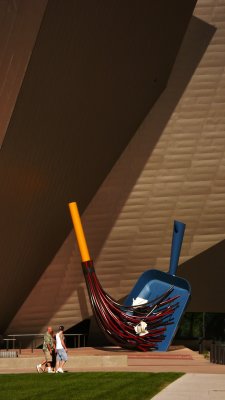 Big Sweep, Denver Art Museum, Denver, Colorado, 2007
A 35-foot high sculpture of a broom and dustpan made of painted metal greets visitors at the base of the “prow” of the new addition to Denver’s Art Museum. The work, by artists Coosje van Bruggen and Claes Oldenburg, offers a double incongruity. Art elevates a commonplace household task to monumental civic status here. And my distant vantage point creates enormous scale incongruity by contrasting the huge sculpture and the even larger museum building to the tiny figures walking below them.
(You can read Oldenburg’s own thoughts on the sculpture at http://www.oldenburgvanbruggen.com/bigsweep.htm )
11 comments leave a comment 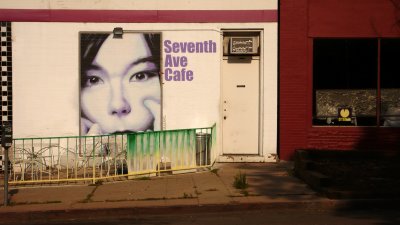 Seventh Street Café, Denver, Colorado, 2007
Sunday morning is a quiet time in Denver’s neighborhoods. This image benefits from that fact – there are no cars to block our view, and the absence of diners at this café intensifies the triple incongruity at work here. The size of the portrait in the advertisement on the exterior wall of this café is incongruously large for its surroundings. Two other incongruities pose questions to the viewer. Why is the model posed in a thoughtful, almost puzzled manner – an introspective attitude that does not seem likely to draw crowds of diners to this café? And why would the café place this portrait so that the woman appears to be chewing on the fence when viewed from across the street?
(Shortly after posting this image, I was told that the woman represented on the wall of this cafe is probably an Icelandic singer known as Bjork. Does this context change the meaning of the picture? I would certainly wonder what her picture is doing on the side of a neighborhood cafe in Denver, Colorado.)
4 comments leave a comment 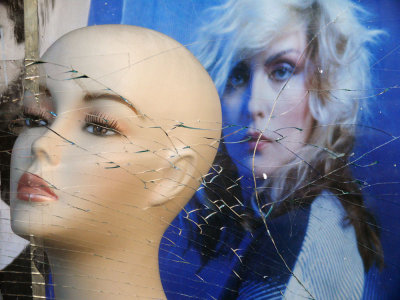 Shop window, Telegraph Avenue, Berkeley, California, 2007
By contrasting a bald mannequin to a photograph of a blonde model with a full mane, the window decorator of this store is using incongruous juxtaposition to stop passers-by in their tracks. It certainly drew the attention of a group of pbase photographers on the prowl for startling images. I was able to add still another incongruity that makes the image go beyond the shocking juxtaposition to imply greater meaning. The window is broken, and I shot the image through the shattered glass to tell still another story. The photograph in the background represents what once was, the bald mannequin suggests the present reality, and the layer of broken glass in the foreground speaks of broken dreams and lost hopes.
14 comments leave a comment 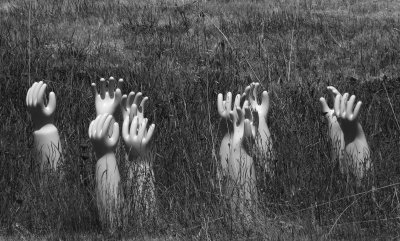 The haunting field, di Rosa Preserve, Napa Valley, California, 2007
Photographs are forbidden in the sprawling galleries on the di Rosa Preserve, but visitors are allowed to make images of the many contemporary sculptures that are placed around the vast estate. These hands reach incongruously from the earth as reminders of our mortality. In color, the image was too real and less haunting. By converting it to black and white, it becomes even more incongruous and unsettling.
6 comments leave a comment 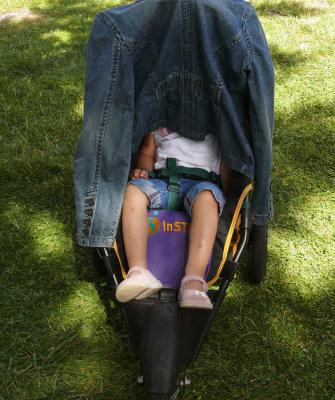 Asleep, Farmer’s Market, Petaluma, California, 2007
A double dose of shade incongruously helps this small sleeper. The adult shirt over the child’s head is also a scale incongruity. The position of the hands and he upright legs make it seem as if she is awake, yet somehow has lost her head. I move in from the top and shoot down to replacing the background clutter with nothing but grass.
0 comments leave a comment 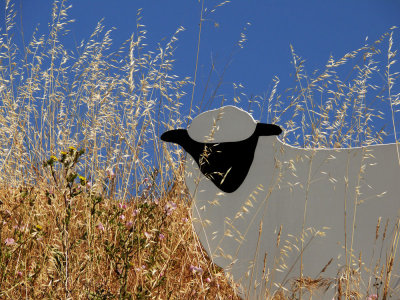 Grazing, di Rosa Preserve, Napa Valley, California, 2007
More than 900 artists are represented in Rene di Rosa’s huge collection of contemporary art at the di Rosa Preserve. One of those artists was his late wife Veronica, who created a herd of grazing sheep made of steel plate in 1988. I first photographed the entire herd as part of a landscape. But the incongruity of it was lost in translation. At a distance, they looked too real. So I moved in and stressed the detail of the grass, using a steel sheep without eyes and mouth as incongruous context.
10 comments leave a comment 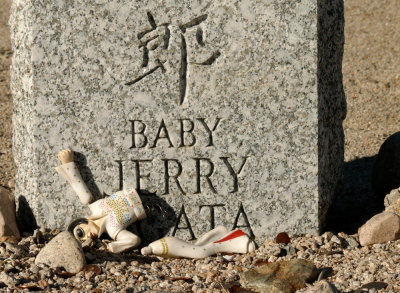 Remembrance, War Relocation Center, Manzanar, California, 2007
More than 11,000 Japanese-American internees were enclosed by barbed wire in this mile square camp between 1942 and 1945. Some still rest in Manzanar's tiny cemetery -- including "Baby Jerry Obata." It is customary to leave broken offerings its graves as remembrances -- somebody has decorated this child's grave with a broken Elvis doll.
There are a number of incongruities in this image – the name is engraved in both Japanese and English; the fact that this is the grave of a baby whose entire short life may well have been spent behind barbed wire fences; and of course the broken Elvis doll lying helplessly, arm extended, amidst the stones left on the grave. The state of the doll is particularly poignant. It is a child’s toy, but Baby Jerry Obata never was able to play with it. Its legs have been twisted off, revealing a spring within the body. It was built for pleasure, but it was left here in sadness.
14 comments leave a comment 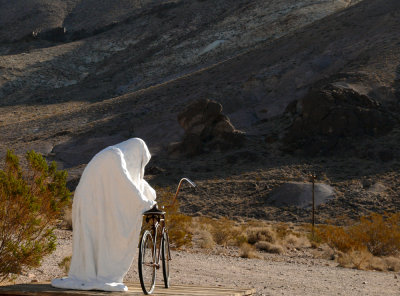 Ghostly welcome, Rhyolite, Nevada, 2007
A contemporary sculpture of a ghost about to ride a bicycle stands just outside of Rhyolite, a ghost town that once lured thousands of gold-seekers. The ghostly sculpture is by Belgian sculptor Albert Szukalski, who came to Rhyolite in the 1980s and established the Goldwell Open Air Museum to add a contemporary dimension to this old ghost town. It is an incongruous work of art -- ghosts don’t usually ride bikes. The ghost is made of stone and the bike seems to be real. I’ve tried to make it even more incongruous by using this vantage point. I’ve removed as much of the sculpture’s platform as possible, making it seem as if the ghost is about to get on and ride off into the hills in the background. My vantage point also allows me to contrast the white ghost to that dark background.
12 comments leave a comment 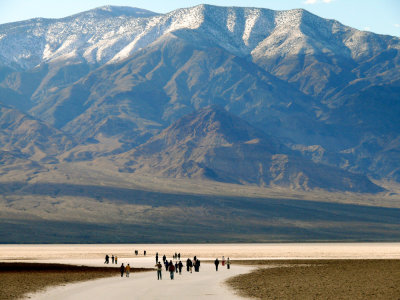 Badwater, Death Valley National Park, California, 2007
The Badwater Basin is the lowest point in the United States, 282 feet below sea level. Visitors can walk over a mile out onto the saltpans below. They are dwarfed by the Panamint Mountains in the distance. It is this scale incongruity that tells the story. Although there is a crowd of people in this image, that crowd is vastly diminished by the scale of both the mountains and the valley. Although I made this image with a 200mm lens, I was far enough away from my subjects to retain this scale difference.
7 comments leave a comment 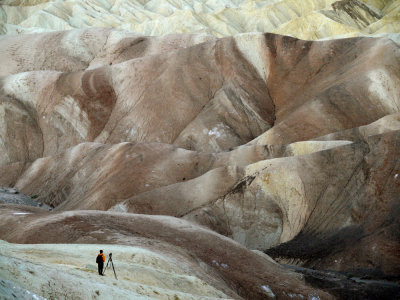 Nonconformist, Zabriskie Point, Death Valley, California, 2007
Instead of following the crowd shooting the effects of the rising sun, this lone photographer turns in the opposite direction to shoot the massive rock formations behind Zabriskie Point in softer light. The scale incongruity here – a small photographer contrasted to a vast landscape – is a perfect match for the idea I am trying to express. Landscape photography is a challenging art. The broader and more massive the landscape, the more difficult it becomes to interpret it. This photographer has a great subject to work with, but now he or she must try to go beyond the clichés and make an image that expresses the essence of the scene.
4 comments leave a comment