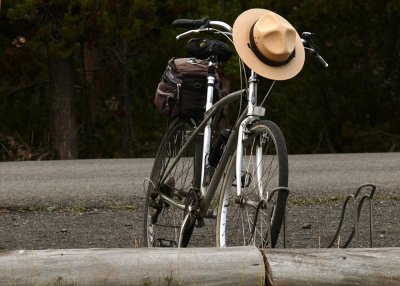 Ranger’s bike, Castle Geyser, Yellowstone National Park, Wyoming, 2008
The ranger who parked this bike just off a Yellowstone tourist trail is a very trusting soul. I found the juxtaposition of parked bike and the ranger hat to be very incongruous. It is as if the bike has suddenly come to life as a ranger. Meanwhile, the real ranger was nowhere to be seen.
2 comments leave a comment 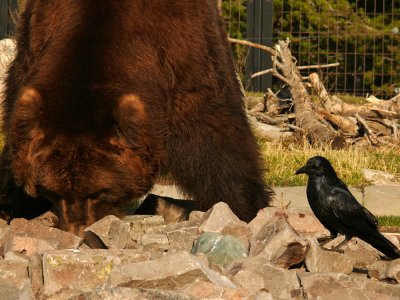 Where’s mine? Grizzly & Wolf Discovery Center, West Yellowstone, Montana, 2008
This huge grizzly is too busy devouring its meal to notice the hungry raven just a few feet away. The scale incongruity is striking – one swipe of the paw could send this raven to another, perhaps even better, place. Yet the bird obviously is used to feasting on the leftovers and seems happy for a place at the table. The bear is one of eight captive grizzlies at the non-profit Discovery Center, which provides visitors going to nearby Yellowstone Park an opportunity to observe, learn about and appreciate grizzly bears and gray wolves. All of the bears are either rescued orphans or were relocated because they had become habituated to human food.
(Note: I think it is important that travel photographers clearly identify any photos such as this one, which depict animals located in zoos, on game farms, or under captive circumstances. In my view, to not do so, and thereby mislead the viewer into believing that such images were made in the wild, is unethical behavior. It also is unfair to those wildife photographers who take the time, expend skill and effort, and assume the expense of making photos of animal behavior in the natural world.)
2 comments leave a comment 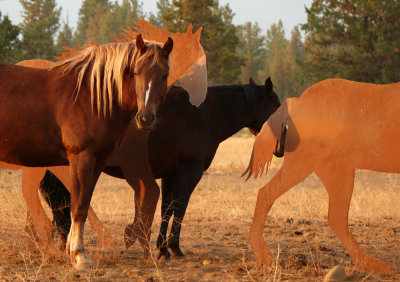 Life imitates art, Sisters, Oregon, 2008
Just outside of the town of Sisters, Oregon, we passed a horse farm that featured a display of life sized flat metal horse sculptures. Incongruously surrounding the sculptured horses were real horses, a perfect opportunity for a striking photograph. I made about fifty images within ten minutes of shooting, and this one was my favorite. Why? Because of how perfectly the real horses have integrated themselves with the metal horses. I include two real horses and two sculptures here. The featured horse at left looks right at us, as if to show off his metal friends. At first glance, the raised hoof seems to belong to it. At second glance. we see that the raised hoof is part of a sculpture. The mane of the real horse appears just below the flying mane of the metal horse, linking the two in tandem. Meanwhile, the black horse at center provides a bridge between the two metal horses. I liked the way the shadow on the tail of the sculpture at right seems to be an extension of the black horse’s head. All four horses, real and imagined, link perfectly here, and take incongruity to a new level.
10 comments leave a comment 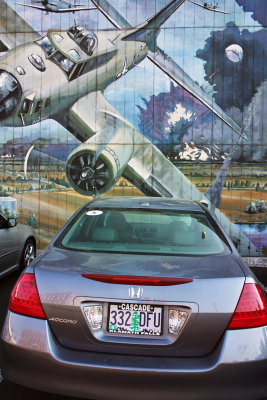 Air raid, Klamath Falls, Oregon, 2008
Many photographers would pass up a chance to shoot this World War II commemorative mural in Klamath Fall because the parking lot in front of it is always full of cars. I saw the cars as a benefit, not a hindrance. I positioned myself so that the huge painting of a bomber seems to be careening into the cars parked in the foreground. I chose a car with a color that would complement the bomber, and the metallic blue paint of this one worked perfectly. I also liked how the big red taillights add an energy that echoes the energy of the explosions in the background. This merging of art and reality creates an incongruous juxtaposition. This image tells us to be careful where we park.
4 comments leave a comment 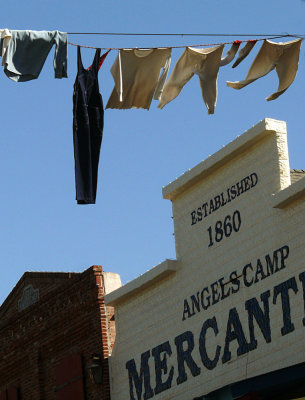 Racing Long Johns, Angels Camp, California, 2008
For the past 70 years, California’s Calaveras County has been holding a frog-jumping contest at its country fair near the old gold mining town of Angels Camp. (The contest was inspired by Mark Twain’s 1865 tall tale of a jumping frog, which was written in Angels Camp.) When we arrived in Angels Camp the week before the 2008 contest, its main street was already decorated with clothing likely to be worn by gold miners. There is a double incongruity at work in this image – using underwear as decoration is an unusual practice. And stiff winds made the long Johns in this image appear to come to life and race each other while dangling on a wire just above the town’s old mercantile exchange. (A week later, we once again passed through Angels Camp, only there was no wind blowing, and the long Johns hung limply over the street.)
10 comments leave a comment 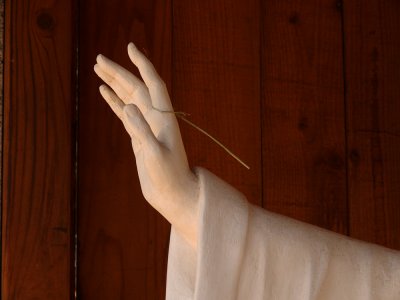 Don’t forget, Mariposa, California, 2008
While visiting Mariposa’s Catholic cemetery, I noticed am iconic statue of Christ on a hill high over the graves. It appears to be blessing the dead. Someone had tied a pine needle around Christ’s index finger – symbolizing the need to remember something. I move in on that finger to stress the incongruity of a potentially forgetful statue of Christ. Meanwhile, reflected mid-day light hits the statue, adding a touch of warmth to the incongruous message.
2 comments leave a comment 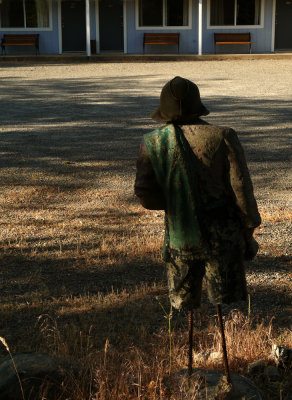 On rusted legs, Coulterville, California, 2008
As we left our hotel in Coulterville, I noticed a battered lawn ornament staring at our rooms just across the parking lot. The figure is handicapped – its legs have been reduced to rusting metal rods. I got behind it, putting my viewers into its shoes. The forlorn figure seems to be longing for a place to stay – the morning light slashes it with spots of warmth and adds mysterious shadows as well. The figure is incongruous. We don’t expect to see something like this standing in a motel parking lot. (He can have my room, now that I’ve checked out.)
8 comments leave a comment 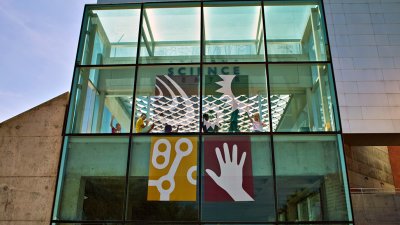 Waves, Arizona Science Center, Phoenix, Arizona, 2008
The huge human hand on the façade of this museum seems to be waving at us, while a group of school children in the glassed-in tower just above it are waving as well. They don’t see the big hand, just a guy with a camera pointed at them. I crop the image into a geometric design by including the building elements on both sides of the glass tower.
The entire image becomes a cohesive grid, supporting both the unique structure of the museum itself and the incongruity of those waves, both small and large.
2 comments leave a comment 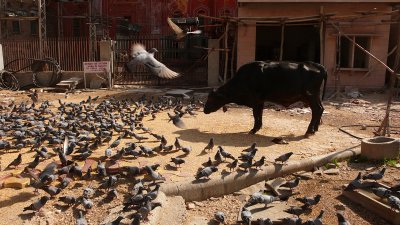 Territorial claim, Jaipur, India, 2008
A cow incongruously faces down a flock of pigeons in Jaipur’s old city The pigeons may rule the air, but they seem to gradually back down on the ground as the cow invades their space.
4 comments leave a comment 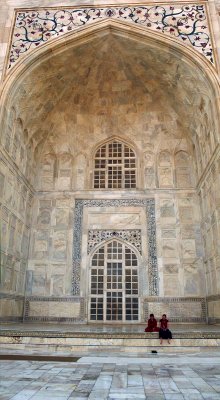 Tourists at rest, Taj Mahal, Agra, India, 2008
Two to four million people visit the Taj Mahal each year, with more than 200,000 from overseas. It is considered one of the Seven Wonders of the modern world. Strict security is enforced -- only water bottles, cameras, and cell phones may be carried in to the complex. Everything else must be checked at the gate. This pair of tourists somehow managed to break away from the surging crowds and find a peaceful alcove all for themselves. That feat alone is incongruous. But so is the scale variation here – the Taj is a study in symmetry. It has four identical entrances, one on each side. This is one of them, and it soars over the pair of fatigued visitors.
6 comments leave a comment 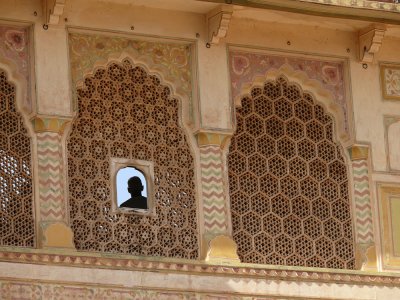 The spy, Amber Palace, Jaipur, India, 2008
The three story gateway to the palace features a sole window for women of the court who were forbidden to be seen by men. Today anyone can peer down at the crowds below. The sight of the silhouetted head is incongruous, particularly when it seems to be looking in two directions at once.
2 comments leave a comment 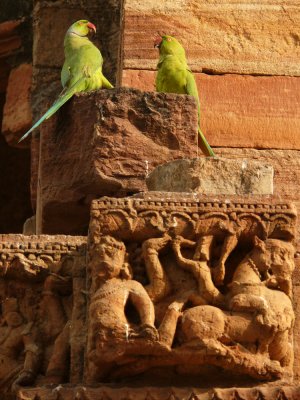 Argument, First Mosque, Old Delhi, India, 2008
The Might of Islam Mosque was India's first, built in 1193. Today, only its ruins remain, home to dozens of parrots. I found considerable incongruity in the sight of two parrots arguing while sunning themselves on a fallen column full of broken figures.
2 comments leave a comment