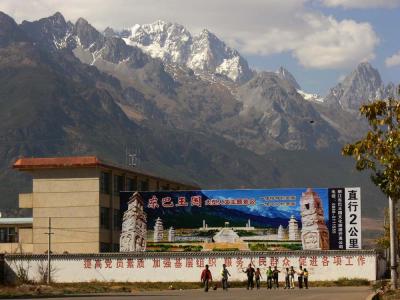 Layers, Lijiang, China, 2006
Lijiang, a city in Yunnan Province is an incongruous mix of more than a million people, includes thousands of Naxi, one of China's ethnic minorities. Art and life also clash incongruously just outside of town -- a billboard promoting a local attraction finishes a poor second to the real thing that soars behind it. A billboard showing a huge picture of the actual mountains that rise behind it is a major incongruity. So too is the scale of the tiny people, when compared to the massive scene they inhabit. This images is comprised of a series of incongruous layers – tiny people, huge billboard, an even larger building, all set before a massive range including the snowcapped 18,360 foot high Jade Dragon Mountain.
4 comments leave a comment 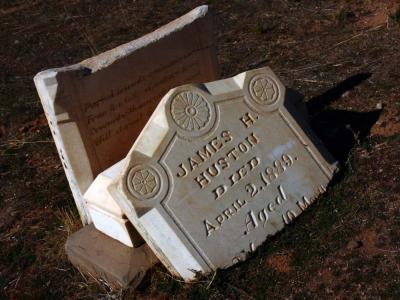 Vandalized Tombstone, Protestant Cemetery, Silver Reef, Utah, 2006
Silver Reef, not far from Zion National Park, boomed from 1878 to 1882. In 1881 the world silver market dropped and by 1884 the town died. Only a handful remained, including James Huston, who died in 1889. He was seven years old. His tombstone in Silver Reef's Protestant Cemetery has been vandalized. What makes this image particularly incongruous is the vain attempt to make the shattered marble stone seem whole again by leaning the fragment against its pedestal. To me, the shattered stone represents a broken life, an appropriate symbol for the grave of a seven-year-old child. I organized the image on a diagonal so I could reveal the side as well as the front of the stone.
4 comments leave a comment 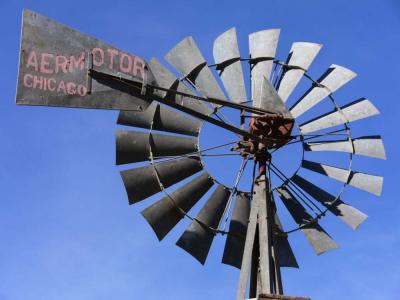 Windmill, Oro Grande, California, 2006
Wind power may be at work on this farm near Route 66. Aeromotor of Chicago was founded over 100 years and is still making windmills to pump water out of the ground. The incongruity in this image comes from the hand painted pink trademark on the tailpiece of the windmill. Here, deep in the Mohave Desert is a vintage machine made in Chicago and still apparently doing what it was designed to do. I designed the photograph very simply. The light was hitting the gray circle of blades perfectly, dividing them into equal portions of light and shadow. I placed the circle on the right half of the frame, carrying the tail into the upper left hand corner, and framed it against a crystal clear pale blue desert sky.
2 comments leave a comment 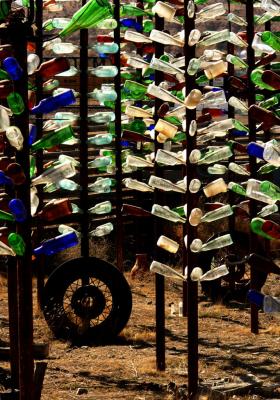 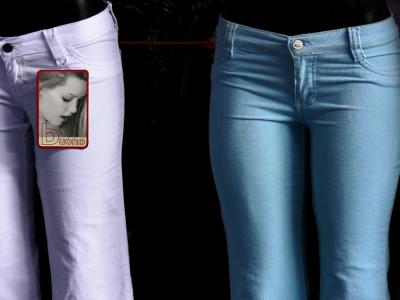 Jeans, Tuesday Market, San Miguel de Allende, Mexico
These pants were part of an incongruous row of jeans displayed on mannequins without torsos in one of San Miguel’s largest markets. By taking them out of the context of the marketplace altogether, I try to make them seem as if they are conversing with each other. I picked the two pair with the greatest degree of contrast. The white pair, which enters the frame at left, carries a tag featuring the trade name and a photo of a gasping model. The blue pair seems stretched to the breaking point. The abstracted black background and flow of natural light over the fabric give the illusion of a third dimension. The longer we look at them, the more these pants seem to acquire an incongruous life of their own.
10 comments leave a comment 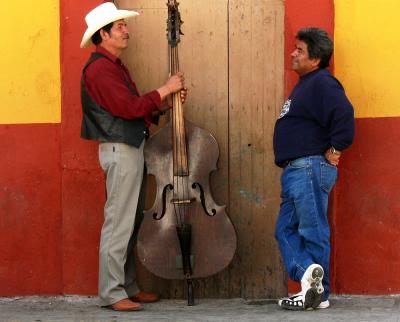 Musical Encounter, Dolores Hidalgo, Mexico, 2005
Dolores Hidalgo, a small town near San Miguel de Allende, was the site of Mexico's first uprising against Spain in 1910. It’s also known for its famous Talavera pottery, and for its bizarre ice cream flavors, which include shrimp, tequila, and fried pork skin. This strange musical encounter on one of its street corners seems almost as odd. Each man stands before an identically colored frame, as if on public display. Their body language and costumes contrast sharply – one man is carefully dressed and stands tall and proud, while the other is casually dressed and seems utterly relaxed. Between them rests a large musical instrument, standing taller than the man who grips it with both hands. It makes a strange companion for street-talk in a small Mexican town.
10 comments leave a comment 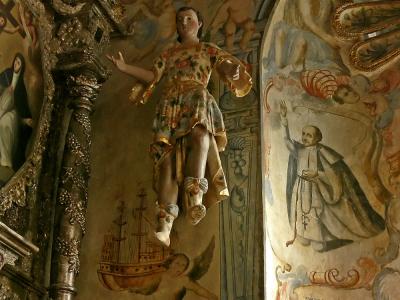 Divine Dance, Sanctuary of Atotonilco, Atotonilco, Mexico, 2005
Angels, demons, saints and martyrs intermingle here to create what some call “The Sistine Chapel of The Americas.” Thousands of pilgrims travel to this shrine each year to participate in religious exercises. Almost every wall and ceiling of this historic church, which was built in 1740, offers a riotous outpouring of Mexican religious folk art. Seen through contemporary eyes, the entire structure is a study in incongruity. This particular figure, which is attached to the wall by a rod, seems to be levitating when photographed from directly below. This low vantage point also calls attention to the grinning friar at right, who seems to be waving farewell. What we have here is a scene that is best described as a Dance of the Divine. The subjects are incongruous to begin with, and I’ve made them more so by where I chose to stand with camera and what I’ve included or rejected within my frame.
8 comments leave a comment 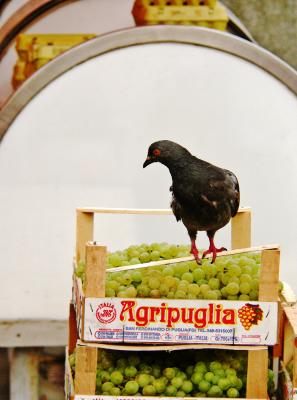 Italian grapes, Croatian pigeon, Dolac Market, Zagreb, Croatia, 2005
I caught this trespasser in the Dolac, Zagreb's colorful fruit and vegetable market. Several incongruities bolster the expressive nature of this image. Pigeons and grapes do not usually go together, but I assume it finds the carton a comfortable spot to rest. (I guess this is why my wife makes me always wash my grapes before eating them!) There is an international flavor to this picture as well – the grapes come from across the Adriatic. I assume the pigeon is a local. The curved panels defining the bins in the background lend a historical or theological touch – the arches almost seem like a backdrop from a Renaissance painting.
8 comments leave a comment 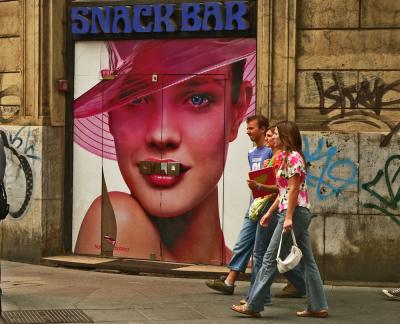 Snack Bar, Zagreb, Croatia, 2005
This snack bar is closed. The only munching going on here is that huge face chewing on the door handles, adding an incongruous dimension to the sea of graffiti in downtown Zagreb. The strange juxtaposition of lips and door handle is not the only incongruity here. The photo on the door has nothing at all to do with a snack bar. It is a fashion photo, making its very presence here another incongruity. What could it possibly be advertising and why in this manner? In any event, the young people marching by it do not even give it a glance. The huge size of head on the door is incongruously large when compared to the head of the passers-by. This image asks more questions of us than it provides answers. I am still wondering why the lady in the red hat is kissing that door handle!
12 comments leave a comment 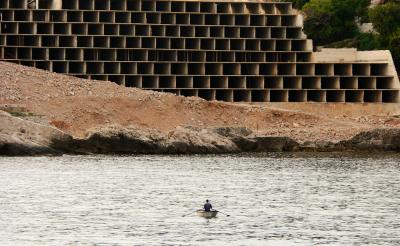 Gutted hotel, Dubrovnik, Croatia, 2005
Caught in the cross hairs of a tragic civil war that ravaged the former Yugoslavia, the ancient city of Dubrovnik was pounded with 2,000 shells in 1991 and 1992. Thirteen years later, as our ship approached the city, we saw this gutted hotel awaiting restoration. It symbolized to me the scale of the reconstruction task still underway here. The lone oarsman who floats before it represents the citizens of this city who will be the ultimate beneficiaries of its reconstruction. He is incongruously small and all by himself, which makes the rebuilding task ahead seem even more formidable.
16 comments leave a comment 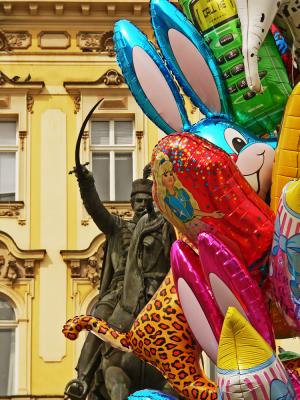 The Chase, Jelacic Square, Zagreb, Croatia, 2005
The equestrian statue of Ban Josip Jelacic -- depicting the hero who once led an army of 40,000 soldiers in a futile quest for Croatian independence -- now chases, equally futilely, an army of colorful balloons in Zagreb's Jelacic Square. I abstract and overwhelm the saber-wielding rider with the incongruous color, scale, and nature of the balloons. The grinning rabbit is the key to the colorful mélange. It offers still another incongruity. It seems happy. The fellow doing the chasing is not. As for my viewers – I suspect that in their imaginations they can already hear a loud popping sound coming from downtown Zagreb.
9 comments leave a comment 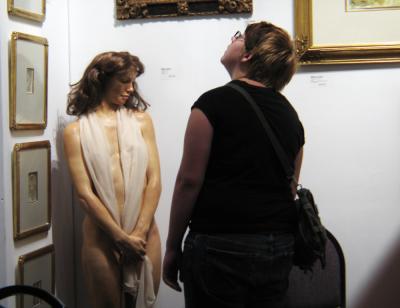 Indifference, Santa Fe, New Mexico, 2005
Two women find themselves alone together in the corner of an exhibition booth at Santa Fe’s International Art Fair. They stand only inches apart, yet neither will acknowledge each other’s presence. One of them incongruously wears almost nothing. The other looks away – it’s as if the semi-nude person is invisible. Given the context of an art show, anything is possible. Even this. Actually, the figure at left is a shockingly lifelike sculpture, part of the exhibit itself. Once we realize this, the meaning of the image changes. It becomes more about the nature of viewing art than a bizarre personal encounter. This is a pre-visualized concept. I knew that pairing the lifelike sculpture with a living person would produce a thought provoking incongruous relationship. I simply pre-framed the sculpture, including a few surrounding paintings for context, and then waited for various art browsers to enter my viewfinder. This was the most incongruous encounter of them all, mainly because of the contrasts in costume, coloration, scale, and body language.
4 comments leave a comment