Gallery Thirty Eight: The camera as time machine: linking the past to the present 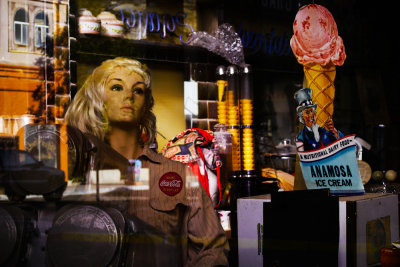 Ice Cream Shop, Miami, Arizona, 2011
An iconic Coca Cola mannequin, a huge poster featuring Uncle Sam under a strawberry ice cream cone, and stacks of real cones blend surreally with the reflection on the shop’s window. The image takes us back in time. It is hard to tell where reality ends and fantasy takes over.
2 comments leave a comment 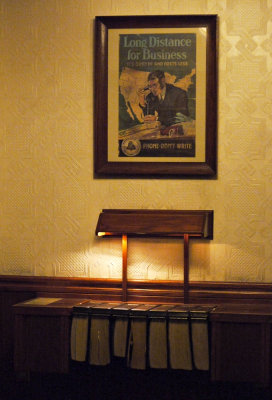 All but forgotten, Durango, Colorado, 2010
A quaint long-distance calling poster from the 1930s still hangs on the wall over the telephone directories in the lobby of the old Strater Hotel in Durango. Now that cell phone packages have replaced conventional long distance toll calls, the poster promoting the use of a phone as faster and cheaper than writing appears nostalgically humorous in this era of instant and constant connectivity. Just across the way stand several phone booths, originally designed for the convenience of the hotel’s visitors. Today, most of the phones that were once in them have been removed.
4 comments leave a comment 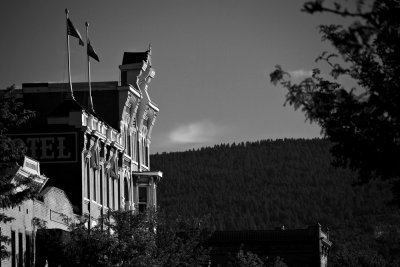 Time-travel, Durango, Colorado, 2010
I photographed the beautifully restored Durango’s old Strater Hotel, which dates back to the 1880s, early in the morning, when the light was low and warm. The shadows are deep at the time of the day, and the hotel and its adjoining structures rise up from them as if from time itself. Yet the brilliant red color of the hotel kept us in the “now.” So I decided to convert this image to black and white. The hotel now looks as if nothing has changed over the years – nothing at all.
2 comments leave a comment 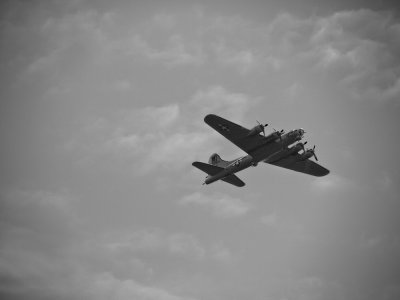 Flying Fortress over Ipswich, Massachusetts, 2009
It came at us out of the clouds, a steel clad ghost bristling with guns. It was the Liberty Belle, a restored World War II B-17 Flying Fortress. I made this image through the windshield of a moving car, getting off only two shots before it vanished again. This was one of them, photographic proof that I was not imagining things. It had taken off from Lawrence Municipal Airport in North Andover, and I caught it in the skies over Ipswich. My fast shutter speed of 1/2000th of second has eerily stopped all four propellers, yet the plane still flies – adding a ghostly dimension. I later converted the image to black and white to give it a period look.
2 comments leave a comment 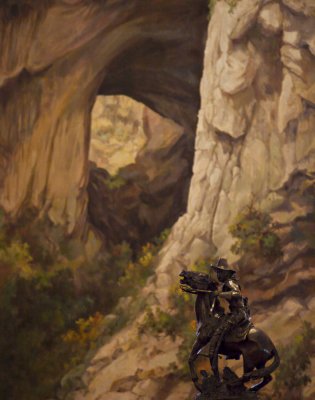 Wild West, State Capitol Museum, Phoenix, Arizona, 2009
I juxtapose two works of art that happen to appear in the same gallery, a collection of western art assembled in the old building that was once Arizona’s capitol. The towering, tunnel-like, landscape painting behind it dwarfs the small sculpture of the horseman. I focus on the sculpture, making the yawning landscape behind it turn soft and dreamlike. The pairing of nostalgic symbols complement each other. They take us back to another time, an era when the west was truly wild, and those who came here could savor its unspoiled natural beauty along with its hazards.
6 comments leave a comment 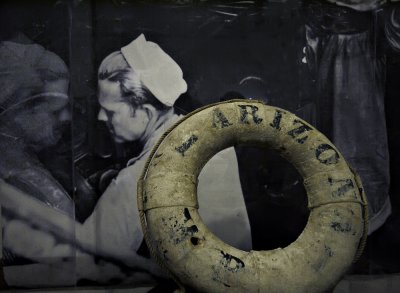 Remember Pearl Harbor, State Capitol Museum, Phoenix, Arizona, 2009
Photographing museum exhibits usually produces little more than descriptive visual information. But not this time. The battleship USS Arizona was sent to the bottom of Pearl Harbor by Japanese torpedo bombers on December 7th, 1941, taking nearly 1,200 American sailors with it, and bringing the United States into World War II. An exhibit “Flagship of the Fleet: Life and Death of the USS Arizona” is a fixture at the Arizona State Capitol Museum. While a rusted fragment of the ship’s hull is the focal point of the exhibit ( see http://www.pbase.com/pnd1/image/111595488 ), a tattered, yellowing life preserver from the ship runs a close second. The preserver is mounted in glass case, which is backed with a vintage photograph showing a sailor aboard the ship. What drew me to it was an eerie reflection – the left hand side of the glass case was reflecting a ghostly version of the sailor back into the display. The more we look at it, the more likely we are to travel back into this sad and terrible story. While the sailor is grim, his reflection seems to grieve. The yellowed life preserver provides context for both.
4 comments leave a comment 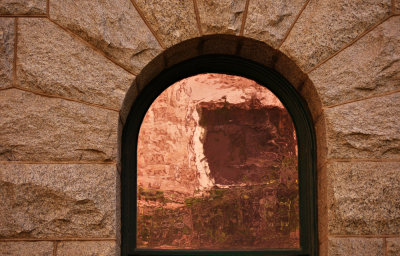 Time tunnel, Old State Capitol, Phoenix, Arizona, 2009
As I looked into this rippled glass of a 100-year-old window set deeply into an arch of granite facing on Arizona’s original State Capitol building, another twisted window emerged in reflection. The contrast between the solid slabs of surrounding granite and the swirling coppery reflection within the arch was profound. Blending with twisted shreds of abstracted shrubbery, the lopsided black rectangle beckons us back into time itself, our destination forever a mystery.
2 comments leave a comment 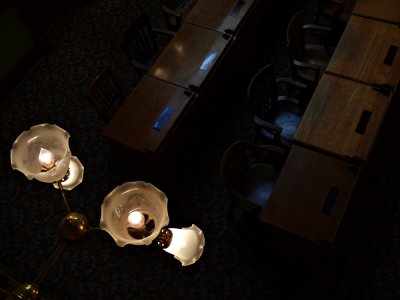 The House of Representatives Chamber, Old State Capitol, Phoenix, Arizona, 2008
This room choed to the arguments of politicians, starting in 1901. It was the scene of the creation of the Arizona State constitution in 1912. The lawmakers have departed, moving to new quarters in a nearby building. But the debates can still linger in this chamber, if you have a good imagination and listen closely enough. I climbed to the visitor’s gallery overlooking the chamber in order to anchor the image with the delicate lighting fixture that first blazed at the turn of the last century. I use a diagonal composition to draw the eye from these lights to the legislator’s darkened empty desks and chairs below. By spot metering on the lights, the room itself goes into shadow, giving the desks and chairs a ghostly presence, and taking us back into time itself.
2 comments leave a comment 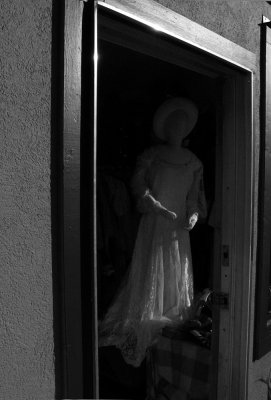 Apparition, Greenville, California, 2008
As I walked down Greenville’s main street, I noticed that the door to a dress shop was left wide open. As I approached the store, I caught sight of a 19th century dress, and saw the gloved hands of a woman illuminated by the late afternoon sun. The figure seemed alive, however when I looked inside the store, I saw that it was a mannequin wearing vintage clothing. I asked a woman working inside the store if I could photograph it. She invited me to shoot inside, but I preferred to stay outside and frame the mannequin in the open doorway. I used my spot meter to expose for the highlights on the hands and dress, allowing the rest of the mannequin to fade into darkness. The original color image paints the door and figure in golden light. When I converted it to black and white, it became less real and more of an apparition. And that was my intention. Once again, I am using my camera as a time machine.
2 comments leave a comment 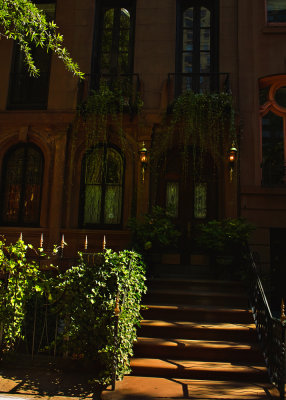 Brownstone, New York City, New York, 2008
The symbolic line between past and present in this image stands at the spot where the light gives way to the shadows. I place the lower edge of the frame on the lower edge of the first step leading up to the doorway of this elegantly restored 19th century brownstone home on a Manhattan’s East Side. With such placement, I invite the viewer to step into the frame, and climb with me towards the gilded lights that still burn, even though the night has now passed into day. The building itself is wrapped in abstracting shadows, yet we can make out the reflections of the brilliantly illuminated foliage in its elegantly arched window glass. Vines flow from two balconies, and the glow of reflected light softly warms the stone façade. I wanted this image to take us back to another time, and thanks to the contrast between light and shadow, it does.
0 comments leave a comment 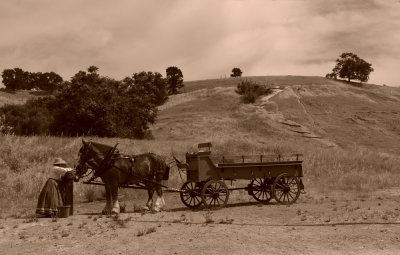 Tending the team, Knights Ferry, California, 2008
This image could have just as easily been made in 1908 as in 2008. The team of horses, the vintage wagon, the 19th century costumes of the women who tend them, and the setting itself, are historically appropriate. To make it look as much like a vintage photograph as possible, I even gave it a copperish sepia tone. The costumed women and their wagon team were there to greet groups of school children touring the historic ruins of a local flour mill. Even the rolling farmland in the background plays its part – it stands virtually unchanged over the years. By making this image from a distance, the women become anonymous. When we try to imagine what they might look like, we can only think of them as women of the past, rather than of the present day.
4 comments leave a comment 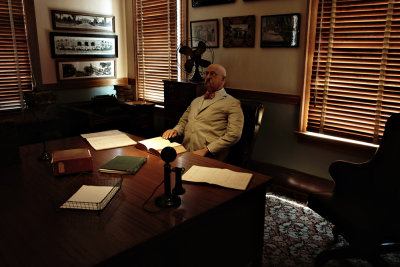 The Governor’s Office, Old State Capitol, Phoenix, Arizona, 2008
The shades are still drawn against the brutality of the Arizona sun. The old office, cooled by those shades and a single fan, housed Arizona’s governors for more than 60 years. I made sure to expose this image so that the softly glowing figure at the desk becomes shadowy and thus more alive, obscuring the fact that we are actually looking at a mannequin. The figure represents George Wylie Paul Hunt, the first governor of Arizona, and the man largely responsible for its constitution. Hunt served as governor from 1912 to 1919, again from 1923 to 1929, and still again from 1931 to 1933. Through light, shadow, and color, I’ve tried to roll back time here in my own way.
0 comments leave a comment