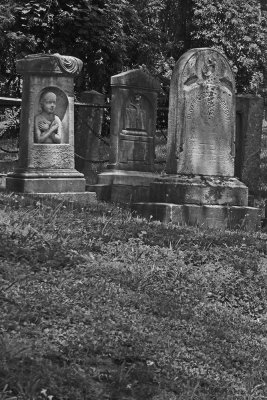 A child in stone, Sleepy Hollow Cemetery, Tarrytown, New York, 2019
This image expresses an enigmatic idea, rich in mystery and somber in mood. I render it in black and white, removing the colors to better serve the story. The image is also a study in textures, which bracket the stone monuments between rough grass and heavy foliage. More than half this image is earth, the final resting place of those lie beneath these grave markers.
The light softly brushes the face of these markers, and adds dimensionality to the figure of a child within the one at left. The child cast in stone, with its arms crossed upon its chest, becomes the subject of this story. We leave it to the viewer's imagination to ponder the elusive, tragic nature of a life cut short. Who was he? How did he die? We may never know but we will perhaps remember this image long after it has gone from our sight.
The image also benefits from the famous nature of its setting -- this name of the cemetery itself sets the mind spinning. It was here where the author Washington Irving is buried -- his gothic story, "The Legend of Sleepy Hollow," published in 1820, features a chilling character known as The Headless Horseman, believed to be a Hessian soldier who was decapitated by a cannonball in battle.
A sentence from Irving's story echoes the mood of my image, as well. "A drowsy, dreamy influence seems to hang over the land, and to pervade the very atmosphere." The cemetery is also known as The Old Dutch Burying Ground. It provides the setting for several scenes in Irving's story. During the American Revolution, the headless corpse of a Hessian soldier was actually found here, and buried in an unmarked grave, providing Irving with a fact upon which to build his legendary fictional tale.
2 comments leave a comment 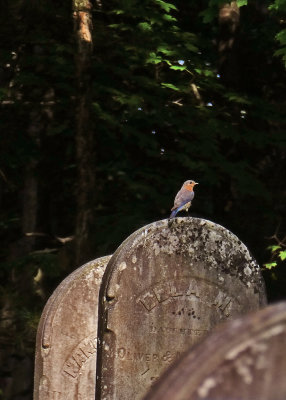 Ella's visitor, Chichester Cemetery, Bedford, New York, 2019
This is a ghost story. A colorful bird sits upon a spattered and worn tombstone engraved with the name "Ella M." The incongruities here contrast beauty with decay, large with small, and colorful with drab. To some, the bird may represent Ella's ghost. To others, her spirit. Ultimately, some may even see this image as a study of rebirth. I used a very long lens (750mm) to read out across a long distance and make the small bird clearly visible. I could come no closer to this bird - it would have fled, spoiling my story!
0 comments leave a comment 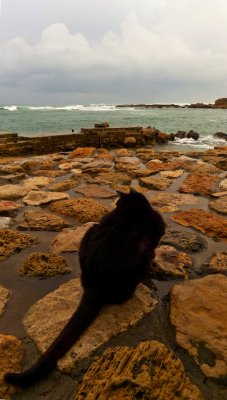 A cat’s tale, Caesarea, Israel, 2011
Huge limestone rocks fill the shoreline of what remains of Herod the Great’s Harbor in Caesarea. Dozens of cats scramble among them – their ancestors have lived here for centuries. I found this black cat perched on one of those rocks, looking out to sea in a light drizzle. The cat anchors the foreground, its tail lodged neatly in the lower left hand corner of the frame. The colors move us through the image; beginning with the richly saturated rocks, back through a pale green sea, to the white crest of the crashing waves, a blue gray sky, and looming rain clouds in the background. The image is timeless – the cat represents continuity that defines the nature of this ancient place. What is going on below those pointed ears? The image makes us think like a cat.
2 comments leave a comment 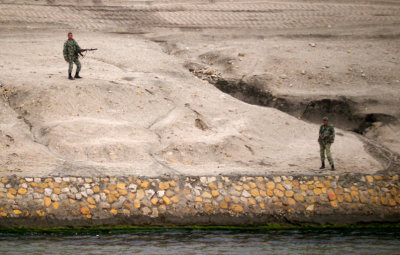 Soldiers along the Suez Canal, Egypt, 2011
Our cruise ship passed the length of Egypt’s Suez Canal, a 120-mile long single lane of water connecting the Red Sea to the Mediterranean. It handles more traffic than the Panama Canal, and is a critical strategic factor in the world economy. The Egyptian army has deployed troops along the length of the canal. I photographed two of them guarding this spot of desert along its banks. Weapons in hand, they stared at the passing cruise liner as if it was an apparition.
Once again, I ask the viewer to imagine what they might be thinking. Two men, alone in the desert, guarding one of the most essential waterways on earth, suddenly look up to find dozens of waving cruise passengers floating by.
2 comments leave a comment 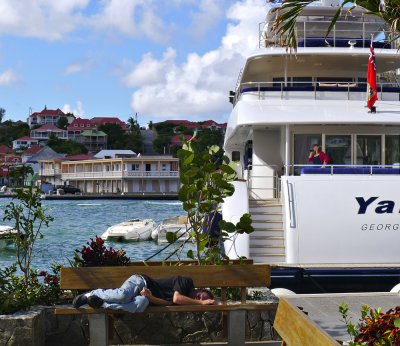 Contrast, St. Barts, French West Indies, 2011
It is early afternoon in St. Barts marina on New Years day, and a man sleeps off the effects of the previous evening’s celebration. Only a few yards away, a woman standing on the rear deck of a massive yacht enjoys a phone conversation with someone who may be on the other side of the world. I juxtapose the two situations – neither person is aware of each other, but we are aware of both. The story here expresses a contrast of levels: energy, social, and economic. I leave it to my viewers to draw their own conclusions.
2 comments leave a comment 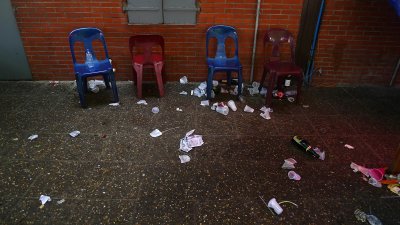 The morning after, St. Barts, French West Indies, 2011
I roamed the streets of St. Barts on New Year’s morning. Some of the town’s bars had not yet removed the residue of revelry from the previous evening. This image tells the story of the morning after. The image is silent – featuring four empty plastic chairs awash in smashed cups and empty champagne bottles. The revelers are nowhere to be seen.
6 comments leave a comment 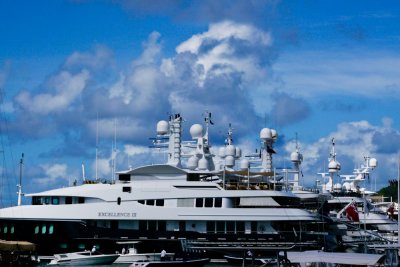 Communications, St. Barts, French West Indies, 2011
The world’s money seemed to converge on tiny St. Barts in the Caribbean to celebrate the arrival of 2011. Dozens of huge yachts were anchored in the town’s marina, each of them bearing massive satellite communications gear. I photographed the scene with a long lens, compressing the yachts into a single entity under a soaring cumulus cloud. It tells the story of wealth, and its attendant perks.
6 comments leave a comment 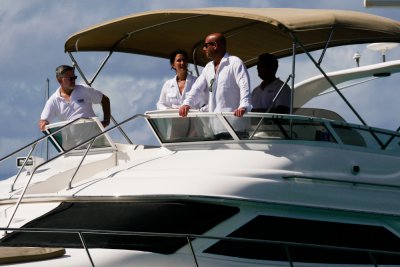 Command, St. Barts, French West Indies, 2011
One of the many luxury yachts cruising St. Barts harbor on New Year’s Day sweeps by my camera, and I zoom in on its bridge to tell a story of command. Four people share space here – three are in the light, one works in the shadows. The dynamics of positioning and body language within that space tells a story in itself. I assume the fellow in the shadows is piloting the yacht. The other three people may belong to the crew or they may be passengers. Perhaps someone in this gathering may even own this yacht? The man at left keeps his distance. He seems to be an observer. The man and woman share space together, front and center. She looks attentive. He wears sunglasses over his eyes, and another pair hangs from his shirt. He grips the yacht’s windshield. Of them all, he seems to be in charge here. We can’t know the actual story expressed by this image. The facts rest on the surface, and we can’t dig behind them. However our imaginations are free to prompt us to draw our own conclusions.
2 comments leave a comment 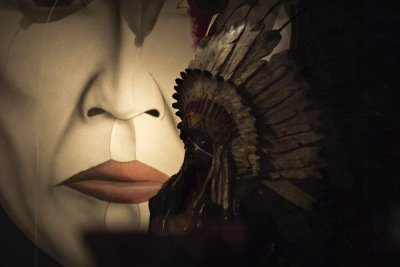 Gallery window, Santa Fe, New Mexico, 2010
In this image, I juxtapose an enormous stylized painting of a Native American against a traditional Indian war bonnet. I abstract the face in the painting by cropping it just below the eyes so that the face seems to be unable to see. Barely visible in the painting are the ends of feathers that enter from the top of the frame. The war bonnet, however, is seen in its entirety, yet it appears much darker than the painting, as if lost in time. My juxtaposition tells the story of vibrant Native American cultural pride, yet a pride tempered by a history of war, oppression and suffering over the centuries.
4 comments leave a comment 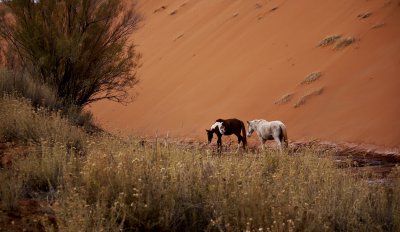 Navajo ponies, Monument Valley, Arizona, 2009
It is a simple image, yet one that tells a story that resonates with history. We encountered a group of ponies grazing at the base of one of Monument Valley’s famous buttes. Our presence obviously spooked them, because as soon as we arrived, they scattered. Two of them plodded past me, heading towards the prospect of food. I filled the foreground with grasses, representing such sustenance. A huge bush dominates the image, making the ponies seem small in comparison. A berm of compacted red sand fills the space behind them, removing all traces of sky and plain. The small horses belong to Navajos, possibly descended from horses originally brought to this place by Spanish conquistadors 400 years ago. The horse became a critical component of Navajo culture, originally providing transport for their nomadic lifestyle as well as giving the means to fight the Spanish and predatory Indian tribes. Today the Monument Valley Navajo use the ponies to offer tours and trail rides to tourists.
4 comments leave a comment 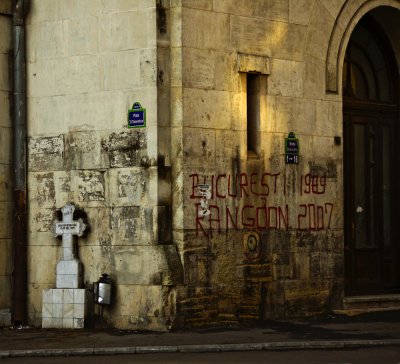 Student memorial, Bucharest, Romania 2009
The pitted, scarred walls on the corner of a building near Bucharest’s university tell a poignant story of protest and death. It all began twenty years ago when Romania’s Communist regime fell. A cross at left speaks of a killing at or near this spot, most likely that of a university student. On the other wall, someone has written in blood red letters “Bucurest 1989,” and “Rangoon 2007” matching Romania’s struggle against a totalitarian regime with a cotemporary struggle in Burma. There is still another story being told through the colors and textures in this image. The residue of hundreds of posters -- dried paste from various student protests over the years -- remains vividly evident. Although those posters are gone, their echoes will not be easily forgotten.
4 comments leave a comment 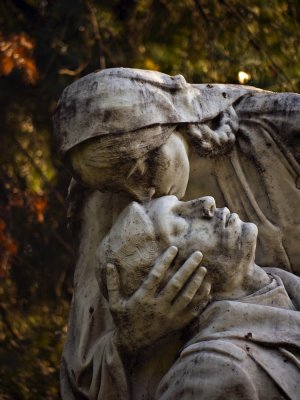 World War I Monument, Cismigiu Garden, Bucharest, Romania, 2009
This Carrara marble sculpture by Ion Jalea, depicting a dying French soldier being comforted by a loving embrace, is Romania’s tribute to the French soldiers who perished here during World War I. I zoomed in on to the faces to reveal the ravages of time on the marble and tell the story more intimately. The once pristine faces, revealing ninety years of grit, seem to imply that the battle still continues. The long 400mm focal length of my lens has turned the background of leaves and flowers into a softly focused screen resembling stained glass, adding a mournful context.
6 comments leave a comment