Gallery Eighty-eight: Exploring the historic back roads of the American Southwest 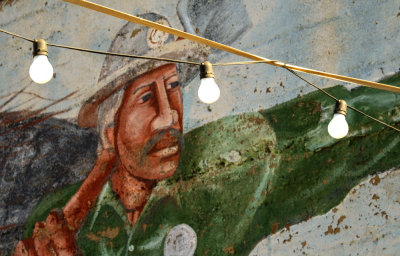 Mining memory, Superior, Arizona, 2014
I zoomed in on this eroding mural overlooking one of Superior’s many vacant lots – the miner recalls the copper mining heritage that flourished here over 100 years ago. Mining ceased here in 1995, but it still offers an identity to this town of only about a thousand people. I layered this image with crossed wires and three light bulbs. None of them are illuminated.
0 comments leave a comment 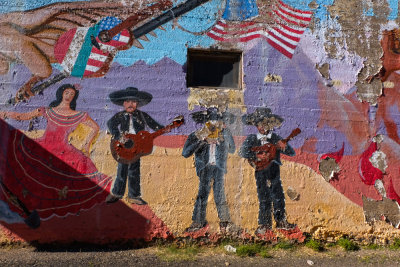 Decaying mural, Superior, Arizona, 2014
This mural once celebrated the blending of two cultures and two countries – the United States and Mexico. Today its colors still draw the eye, although the ravages of time, and perhaps vandals as well, obliterate two of the musicians. I built my image around the diagonal thrust of the shadow at lower left and the diagonal flow of the guitar at upper left. Mexican and American flags decorate that guitar, symbolizing two cultures united by a common love for music.
0 comments leave a comment 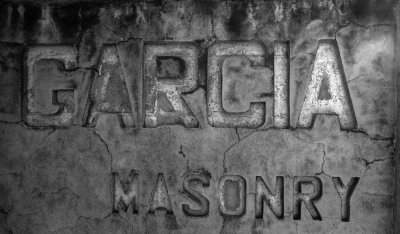 Signage, Globe, Arizona, 2014
While passing through the old mining town of Globe, I noticed that the sign for this masonry business was riddled by small cracks. I moved in that detail, creating a sense of incongruity in the process. Since the sign was already gray, with faded remnants of white paint, I rendered this image in black and white.
0 comments leave a comment 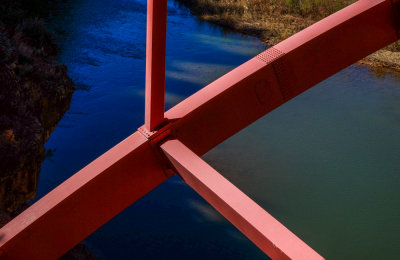 Primary Colors, Salt River Canyon, Arizona, 2014
I abstract the huge bridge over the canyon by framing only parts of its red steel girders. I positioned the largest beam as a powerful diagonal running from corner to corner. The two smaller beams offer context. I designed this image to contrast the red steel to the rich blue water of the river running below it. Red and blue are primary colors, and when seen in combination, the effect defines power and energy.
0 comments leave a comment 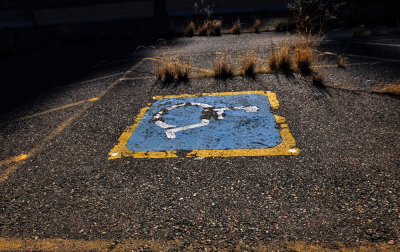 Abandoned rest area, Salt River Canyon, Arizona, 2014
This rest area, near the bridge over the Salt River Canyon, was most likely abandoned as a result of state budget cuts during the last recession. I use two of the three primary colors – in this case blue and yellow – to define the result. Nature itself is reclaiming the concrete surface of what once was a handicapped-parking slot, as ranks of oncoming weeds slowly make their advance.
0 comments leave a comment 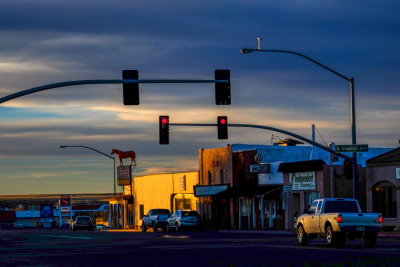 Evening falls, Springerville, Arizona, 2014
The main street of this small town looks quite ordinary until we notice a larger than life red horse standing atop a Western wear sign just down the block from us. This incongruity, along with the warm light of the setting sun, makes a quite ordinary place seem extraordinary. The pair of bright red stoplights, echoed by the glowing taillights of the truck at right, adds a cautionary counterpoint to an otherwise peaceful scene.
0 comments leave a comment 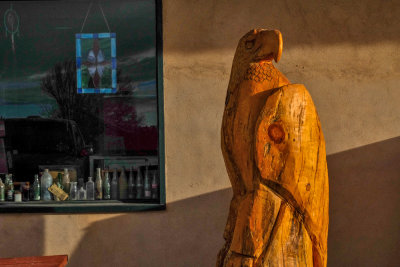 Country Store, Quemodo, New Mexico, 2014
This huge wooden eagle was carved with a chain saw. It stands before the only store we found in this tiny hamlet located along the nearly deserted US Route 60 in the wind-swept hills of western New Mexico. The early morning light gilds the carving, as well as defining the old bottles lining the bottom of the window in the background.
0 comments leave a comment 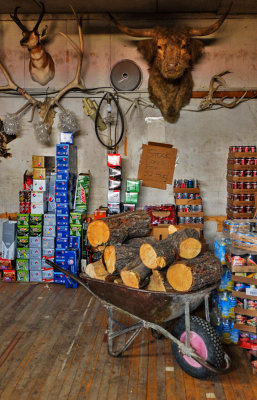 Storage Room, Country Store, Quemodo, New Mexico, 2014
The incongruous juxtaposition of mounted animal heads, antlers, skulls, soft drinks and firewood offer the flavor of country life in this isolated hamlet. I moved in with a 24mm wideangle focal length to embrace the entire scene, yet remain close enough for detail to come through.
0 comments leave a comment 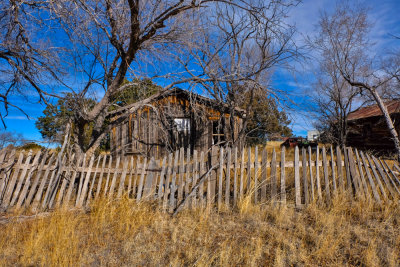 Abandoned home, Pie Town, New Mexico, 2014
Pie Town sits 8,000 feet high, atop the Continental Divide along Highway 60 in Western New Mexico. It has always been known for its pies, and for its place in photographic history. In 1940, Russell Lee, a documentary photographer working on assignment for the Farm Security Administration of the US Government, photographed Pie Town and its people near the end of the Great Depression. The tiny town was then intact – its main street looking like a scene from an old cowboy movie. Lee was among the few photographers to use the new Kodachrome film for his images.
Today, much of Pie Town lies in ruins. I photographed this homestead, layering the image by using a 24mm wideangle focal length to stress first the high weeds, then the sagging picket fence, and finally the ghostly trees framing the weather-beaten house.
2 comments leave a comment 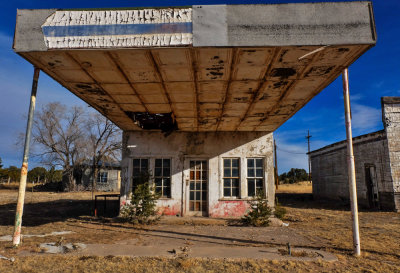 Gas station, Pie Town, New Mexico, 2014
My 24mm wideangle focal length emphasizes the canopy over this abandoned gas station in Pie Town by distorting it. It makes the front panel on the canopy seem much larger than it really is, thereby stressing the remnants of its peeling paint, as well as the corroding ceiling under the canopy.
0 comments leave a comment 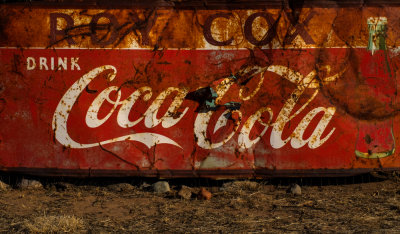 Coca Cola signage, Pie Town, New Mexico, 2014
The surface of this decaying sign symbolizes Pie Town’s rise and fall. The product was intended to bring enjoyment to the long departed residents of this place. Today, the bottle pictured at right has virtually faded away, just as the town has. Meanwhile, rust has nearly obliterated the name of the man who ran the store where this drink was sold.
0 comments leave a comment 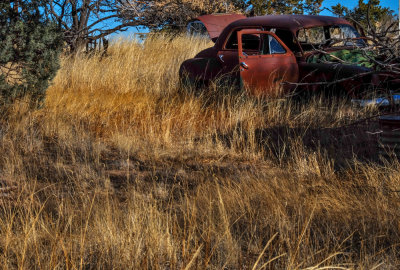 Requiem, Pie Town, New Mexico, 2014
Nearly 75 years ago, Russell Lee came to this place to document the deprived living conditions of those who once lived here. His images, along with those of fellow FSA documentary photographers such as Dorthea Lange, Walker Evans, Arthur Rothstein, and Gordon Parks, helped create an American cultural myth out of a ravaged rural nation. I’ve recalled Lee’s Pie Town imagery here with an offering of my own – a vintage automobile at the end of its trail, lying at rest in a field of golden weeds.
0 comments leave a comment