Gallery Thirty Two: On Safari -- expressing the essence of nature 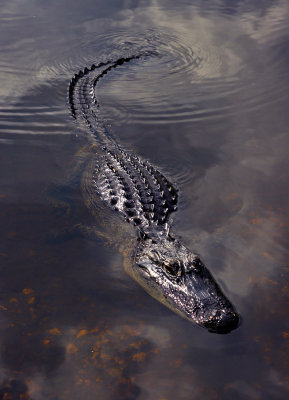 Alligator Tracks, Everglades National Park, Florida, 2013
It was moving swiftly towards us, propelled by a tail moving back and forth through the swampy water. The ever-widening, rippling circles around that tail speak of its inexorable approach. When I made this image standing at water’s edge, this partially submerged alligator was barely a few feet from shore and still in motion. I waited as long as I could to get the most out of the pattern it was leaving on the surface of the water, and then made this image at a focal length of only 93mm. It works as an expressive wildlife photograph because it is more than just a description of an oncoming alligator. It is an image of threat, a throw back in time to an age when dinosaurs roamed the earth. The soft puffy clouds, reflected on the water’s surface, offer a benign counterpoint to the danger rushing towards us.
0 comments leave a comment 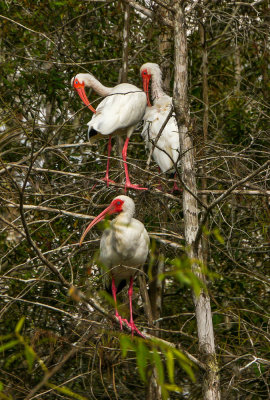 White Ibis, Big Cypress National Preserve, Florida, 2013
Dozens of these delicate water birds make the swamplands of Florida their home. During the breeding season, the American White Ibis gather in huge colonies near the water – some of them as large as 30,000 have been counted. Much of their time is spent roosting on trees, where they preen, biting their feathers with their long red bills. That’s what is happening in this image. Three ibis balance their fragile long legs precariously on the thin branches that support their weight. I waited until two of them began to preen, and when the third turned in the same direction as the others, I made this image.
0 comments leave a comment 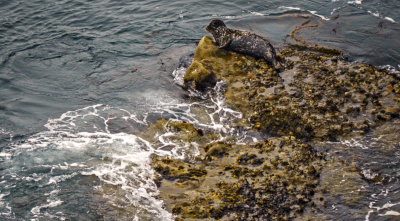 California Harbor Seal, Point Lobos State Natural Reserve, Carmel, California, 2012
This harbor seal seems perfectly matched to its environment. By shooting it from overhead, I compare the unique pattern of spots on its back to the spotted pattern of kelp chunks decorating the rocks around it. About 25,000 of these seals can be found along the entire California coast. They feed in kelp forests, and rarely are found more than twelve miles from the shore. This harbor seal is hauling out – taking a rest after foraging for food.
0 comments leave a comment 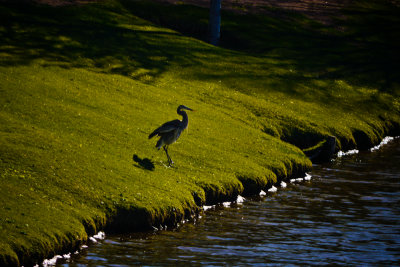 Heron, Green Valley Park, Payson, Arizona, 2011
Green Valley Park, dedicated in 1996, offers three lakes covering 13 acres. Payson, a small city in central Arizona, boasts “if people can’t get out of town to fish, we will bring the fish into town for the people.” The lakes also bring wildlife into town, looking for those same fish, such as this heron sitting at water’s edge, waiting for a meal. The late afternoon light throws it into silhouette, and brackets the lush green grass with blue water in front and dark shadows behind. I used the diagonal line of the shoreline to pull the eye through the image.
0 comments leave a comment 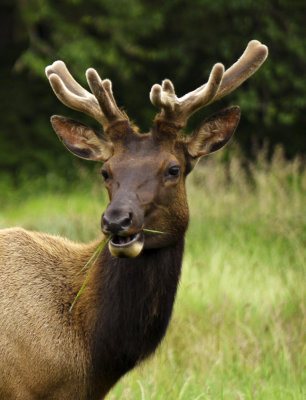 Graze, Prairie Creek Redwoods State Park, Orik, California, 2009
A young male elk, antlers soft as velvet, enjoys the grass meadows of this lush park. Herds of elk gather here to feed, as well as to enjoy the nearby beaches. I used a 400mm telephoto focal length to hone in on the feeding action and blur the background at the same time.
2 comments leave a comment 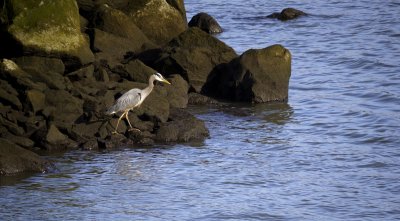 Heron, Astoria, Oregon, 2009
This heron was poised on a rocky point quite a distance from us. Using a 400mm long telephoto focal length, I able to relate this fishing bird to its environment while displaying detail in the feathers and coloration. Its beak moves forward, echoing the thrust of the jutting rocks behind it.
0 comments leave a comment 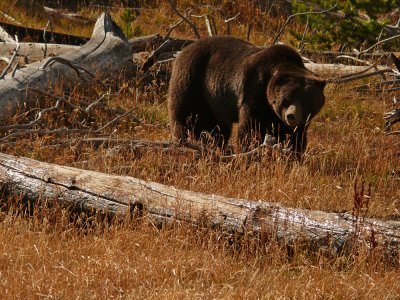 Grizzly, Yellowstone National Park, Wyoming, 2008
Only a few moments after entering Yellowstone, we were stunned to see dozens of cars parked along the side of the road. Nearly 100 people were standing nearby photographing a single male grizzly under a blazing mid-day sun. We spent almost a half hour photographing it. It was a very difficult subject. The bear seldom lifted its head. It was digging for underground morsels such as roots. The high sun created harsh contrasts – the bear was dark brown, and the surround logs were light brown. I often found myself making the same mistake – zooming in tightly on the bear instead of pulling back to include its relationship to the environment. The world does not need another animal portrait – we should spend our time as photographers going beyond animal portraiture to create animal landscapes. And that is what I’ve tried to do here. It is an image about an endangered species. Yellowstone is one of the few places in the United States were we can view grizzlies in the wild. The fallen trees in this image have boxed him in – he seems to be wondering which way is out. He also seems cornered and somewhat diminished because of it. He is a living reminder of our natural assets that are living on borrowed time.
4 comments leave a comment 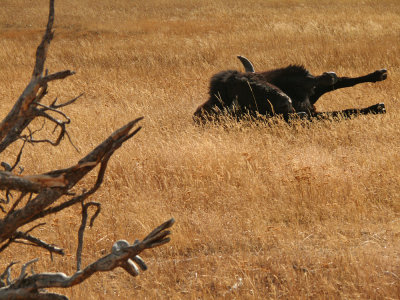 Stretching, Yellowstone National Park, Wyoming, 2008
It is very easy to make pictures of bison in Yellowstone National Park. It is more difficult to make a picture of how bison live in Yellowstone National Park. I always look for an image that goes against the normal view. Most bison stand. This one was lying down. As I waited, it began to stretch its legs to get the circulation going. I noticed that its hooves were split into two “toes.” I quickly changed my vantage point to include some fallen branches that not only echoed the stretched legs of the bison, but also had symbolic “toes” at the end of them.
6 comments leave a comment 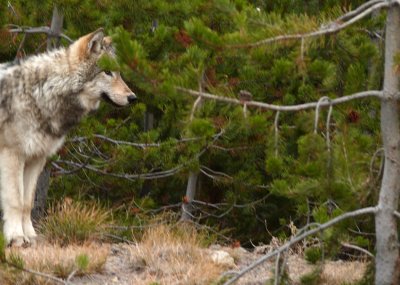 Gray Wolf, Yellowstone National Park, Wyoming, 2008
As we traveled along the twelve-mile road between Norris Junction and Canyon Village, we were astounded to find a group of Gray Wolves standing alongside of the highway. Such a sighting is very rare. Wolves had been extinct in Yellowstone for many years, and were reintroduced only in the 1990s. There are less than 200 wolves in this vast park, and they are mostly invisible, except when seen through spotting scopes at over a mile away. Our trip leader had been to Yellowstone 18 times and had never seen wolves this close before. Yet here were three members of a group known as the Canyon Pack right in front of us for a few seconds. By the time we were able to stop our van at a pullout, exit the car, and focus our cameras, they were heading back into the forest. Most of my hurried images were just jumbles of fur. Only this wolf stopped for a second to pose for me in full profile. I cropped the image just behind the front legs to express the relationship between the wolf and its home – the deep forests of Yellowstone.
(Our trip leader, Dave Wyman, was able to photograph a remarkable head-on curious stare from this same wolf. You can see it at http://www.pbase.com/image/104594573 )
2 comments leave a comment 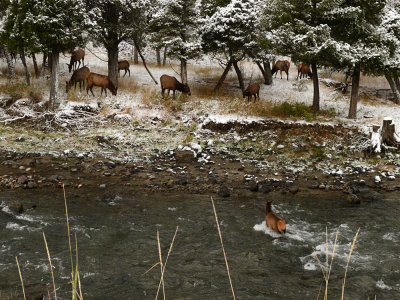 Grazing elk, Gardner River Canyon, Yellowstone National Park, Montana, 2008
We came across this herd of female elk grazing through newly fallen snow on the banks of the Gardner River. I built this image by comparing the herd on land with a single elk crossing the river in the foreground. The elk graze in and among snow-laden pine trees, seemingly safe, while the single elk wades alone, exposed for the moment in the bitter cold river. She will soon join them below the trees.
4 comments leave a comment 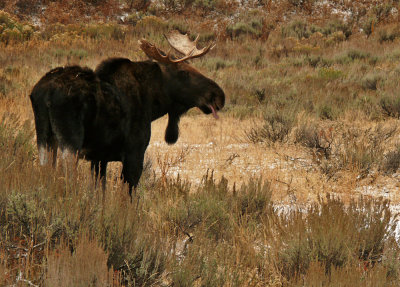 Tongue, Grand Teton National Park, Wyoming, 2008
This would have been just another descriptive image of a grazing moose, if not for the long tongue coming out of its mouth. The tongue is the detail that gives this image its message: a moose having a good breakfast.
4 comments leave a comment 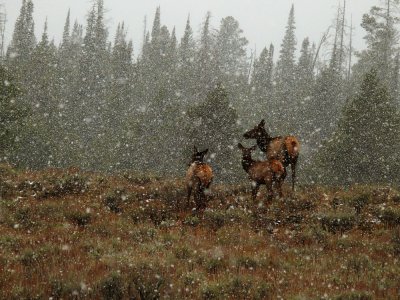 Toughing it out, Yellowstone National Park, Wyoming, 2008
Three female elk huddle together on a ridge, riding out snow shower on a ridge near Yellowstone Lake. I kept the pines in the image because their pointed tops echo the pointed ears of the elk. As a wildlife photographer, I am more interested in images of animal behavior than I am in making animal portraits. This image tells us how these elk react to a snowfall – they tough it out.
2 comments leave a comment