Gallery Ninety-four: The Road to Chautauqua 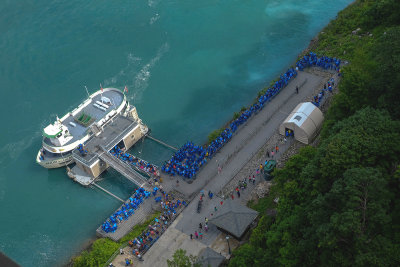 Maid of the Mist, Niagara Falls, New York, 2015
The “Maid of the Mist” was launched in 1846 as a ferry service between the Canadian and American sides of Niagara Falls. Eight years later, a bridge made the ferry obsolete, and turned it into a tourist attraction that has lasted more than 150 years. Today, the Maid of the Mist offers the only boat tours of the falls from the American side. (A Canadian company offers tours from the Canadian side.)
The ship takes 600 passengers for an hours ride through the mist of American Falls, Bridal Veil Falls, and Horseshoe Falls. I made this photo from high above the loading dock. A line of new passengers files into a tented structure at right, and when they emerge, each of them is wearing a blue poncho, which helps them stay relatively dry during the trip. This image embraces the entire embarkation process, and speaks of the massive numbers involved.
0 comments leave a comment 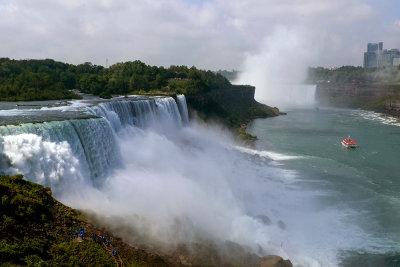 The view, Niagara Falls, New York, 2015
All three of the waterfalls that comprise one of America’s most iconic natural wonders are visible from an observation platform that looms high above the scene. In this image, my wideangle lens embraces the massive American Falls, at left, along with the more delicate Bridal Veil Falls just to the right of it. The enormous clouds of thundering water at their base draw the eye towards Horseshoe Falls in the far distance. In order to establish a sense of scale, I waited until a tour boat appeared in my frame, and then made this image. Additional scale is provided by a tiny line of poncho-clad tourists in the lower left corner of the frame.
0 comments leave a comment 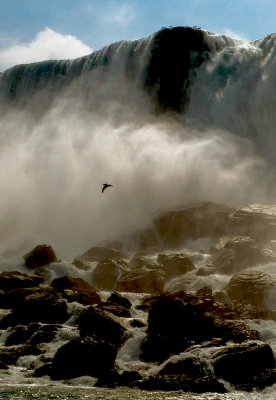 The plunge, Niagara Falls, New York, 2015
I made this image while standing next to the railing of the Maid of the Mist tour boat as it moved past American Falls, the second highest of Niagara’s falls at 100 feet. My goal was to express the powerful energy of the water as it crashed into the rocks at the base of the falls. I used a very fast shutter speed of nearly 1/1000th of a second to catch a water bird soaring through the clouds of exploding water.
2 comments leave a comment 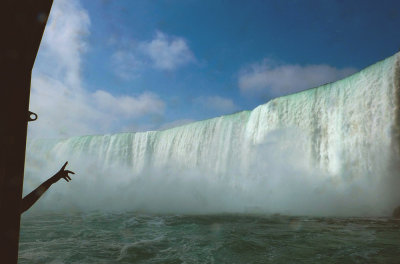 Horseshoe Falls, Niagara Falls, New York, 2015
Horseshoe Falls is the most powerful waterfall in North America, as measured by its 188-foot vertical drop and its flow rate of five million cubic feet of water falling over its crest every minute. It is the largest of Niagara’s falls, a curving 2,600 foot-wide wall of falling water that is best seen, heard, and felt from the deck of a wet and rocking tourist boat. I did not want to make a picture of just the waterfall itself. I wanted to also express the awe-inspiring experience of viewing this iconic scene for the first time. Using a 24mm wideangle lens, and standing next to my daughter as she was explaining this incredible sight to my young granddaughter, I captured this silhouetted gesture as she eloquently pointed towards the scene. I saw this gesture as a symbol of wonder. It does justice to the sight before us.
2 comments leave a comment

Soaked, Niagara Falls, New York, 2015
I made this image to express the human side of my Niagara Falls experience. My four year old granddaughter, soaked from the constant mist that enveloped our tour boat, clutches her mother’s hand for reassurance after seeing and feeling the fearsome fury of the falls at first hand. We see in this image a child trying to come to grips with what must have been a scary sight, and using her mother’s hand as symbolic support.
2 comments leave a comment 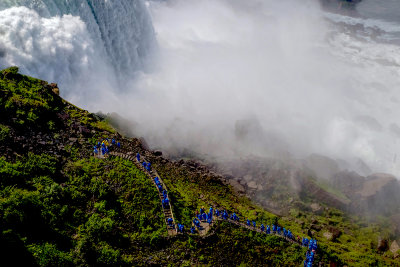 Man and nature, Niagara Falls, New York, 2015
I fill the top half of the frame with the energy and fury of nature – the falls seem to explode at left, becoming a massive flow and then vanishing in the cloud of spray at right. The bottom half of the frame is entirely filled with foliage, beneficiary of the moisture descending from above. A tiny staircase winds through the trees, bearing a seemingly endless line of poncho-clad tourists. They are incongruously small in scale and seemingly at the mercy of nature’s power.
2 comments leave a comment 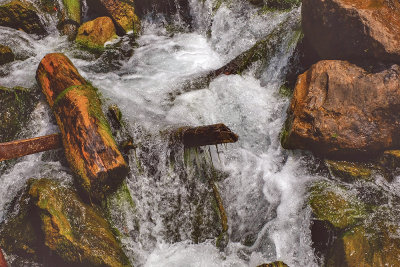 Debris, Cave of the Winds, Niagara Falls, New York, 2015
I express the force of the falling water by isolating man-made debris trapped amidst giant boulders and fallen trees. The churning flow makes it way through the image from top to bottom, carrying the stuff of man before it.
0 comments leave a comment 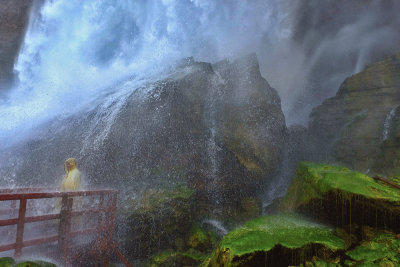 Finale, Cave of the Winds, Niagara Falls, New York, 2015
The Cave of the Winds is actually a series of staircases and platforms at the base of Bridal Veil Falls. In this image, a visitor is pummeled by a torrent of water exploding upon the rocks behind him. The yellow poncho and the rich moss upon the rocks offer a counter point to monochromatic boulders and flying water. It is very difficult to make photographs here – the mist soaks camera and lens instantly, making any image hazy. In this case, however, the slight haze on my lens helps to abstract the scene and thereby intensify the meaning of the picture.
0 comments leave a comment 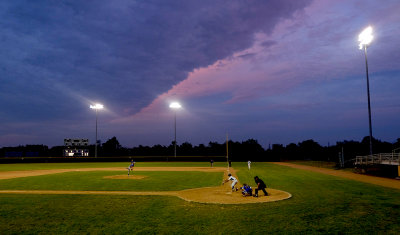 Symmetry, Sal Maglie Stadium, Niagara Falls, New York, 2015
This four thousand seat baseball park, built in 1939 and called Hyde Park Stadium, was renamed in 1983 for former major league pitcher Sal Maglie, who once played for here for the Niagara University Purple Eagles. The Eagles still play here, and so do the Niagara Power of the New York Collegiate baseball league. On the evening I made this picture, the Niagara Power drew less than 300 fans to the 4,000-seat stadium. Using a 24mm lens, I made this image from the first row, embracing not only the action on the field but also the lovely diagonal pink cloud that dominates the purple evening sky.
The diagonal thrust of the cloud complements the geometric symmetry formed by the baseball diamond and the long dirt path before the dugout. The batter, leaning forward to place a bunt, also echoes the thrust of the diagonal cloud. The scene is pure Americana, a quiet ending to our brief visit to Niagara Falls.
4 comments leave a comment 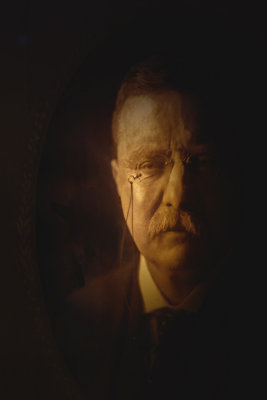 Out of the past, Theodore Roosevelt Inaugural National Historic Site, Buffalo, New York, 2015
On September 14, 1901, Theodore Roosevelt took the oath of office as president of the United States in Buffalo, following the assassination of his predecessor William McKinley at the Pan-American Exposition. He was inaugurated in the home of his friend,
Buffalo lawyer Ansley Wilcox, which has now become a National Historic Site. There are many photographs of Roosevelt on the walls of this house, and I chose this one to best express the nature of this sad event. I moved in, eliminating its oval frame entirely. I exposed for the highlight on his face, making rest of the image fade into somber darkness. Roosevelt’s serious expression says a lot about this time and this place, and the darkness surrounding him symbolizes the mood of the moment. Yet his spectacles and the cord that dangles from them tell us he is ready to assume the job at hand. The sepia color expresses the photographic technique of the era.
0 comments leave a comment 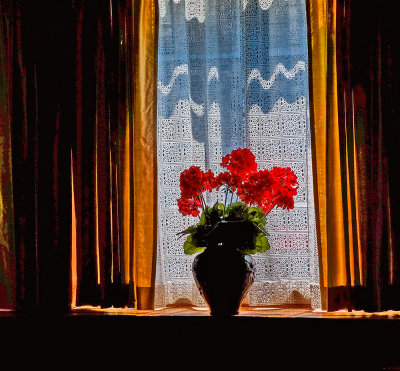 Translucence, Theodore Roosevelt Inaugural National Historic Site, Buffalo, New York, 2015
A day after President William McKinley died from an assassin’s bullet, a grieving Theodore Roosevelt was sworn in as the 26th president of the United States in the opulent library of his friend, Ansley Wilcox. The ceremony took place at this bay window. Today, a vase of flowers marks the spot. I used spot metering mode to expose on the brightest part of the image – the sun, as it illuminated the flowers commemorating Roosevelt’s inauguration here 114 years ago. The blossoms become translucent, as do the drapes and curtain in the background. The window beyond casts its shadow on that curtain, which becomes an art deco abstraction symbolizing the event’s era. Color also plays a major role in this image. The red flowers dominate the scene, while the golden drapes add a rich tone worthy of the scene.
2 comments leave a comment 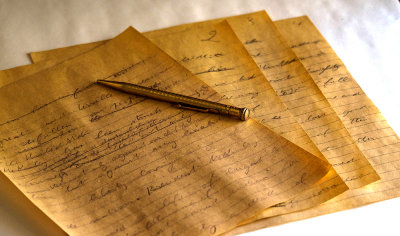 Calming thoughts, Theodore Roosevelt Inaugural National Historic Site, Buffalo, New York, 2015
After being sworn in as president following the assassination of president McKinley, Theodore Roosevelt said, “It is a dreadful thing to come into the Presidency in this way, but it would be far worse to be morbid about it. Here is the task, and I have got to do it to the best of my ability; and that is all there is to it.” Among his first tasks as president was to send a message to the American people. His four-page draft still rests on the desk in the room where he took the oath. I photographed it from a close vantage point. The words are illegible, but the gilded pen and yellowed paper symbolize historical importance. Roosevelt’s message was intended to calm a grief-stricken nation, and promised to continue the policies of McKinley’s administration.
0 comments leave a comment