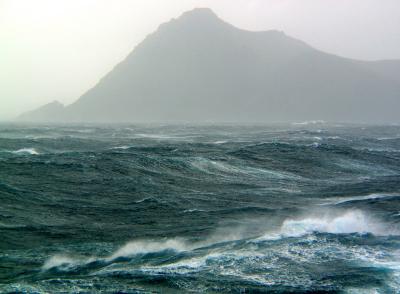 Rounding the Horn, Patagonia, Argentina, 2004
The opening shot of a photo essay should set a tone or theme for what is to follow. I open my essay on Antarctica with this shot made from the deck of a ship in heavy weather off Cape Horn. At this place, the Atlantic Ocean meets the Pacific, and winds deflected down the Andes are free to bend and race past the Horn like a snapping whip. Bad weather is what makes this part of the earth terrifying, yet special. My precarious vantage point ñ hanging on to a railing with one hand and shooting with the other -- features the blowing and churning seas, and also the distant but distinct shape of Cape Horn in the misty background, which adds context. For centuries, sailing ships were tossed about and smashed to pieces in these waters -- the 600-mile wide Drake Passage separating Antarctica, the Great White Continent, from the tip of South America.
19 comments leave a comment 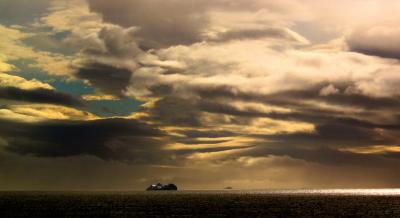 Icebergs at Dawn, South Shetland Islands, Antarctica, 2004
The second image in this photo-essay offers a change of pace from the previous image. It is calm, rather than turbulent. The colors are warmer, the sea flat. The churning waters dominating the previous image may be gone, yet the rhythmic flow of the clouds implies memories of those waves. The key to this image, however, is the enormous iceberg floating in the distance. Vast in size, it is seen here very small in scale, suggesting the enormity of this continent.
15 comments leave a comment 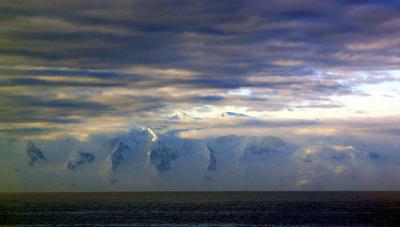 First sight, Antarctica, 2004
It was a moment hard to forget and difficult to believe. What seemed at first to be a distant bank of clouds suddenly revealed itself as cloud shrouded mountains lining the edges of great peninsula awaiting us. The colors contrast to those in the previous image, and set the stage for the snow-covered scenes that follow.
7 comments leave a comment 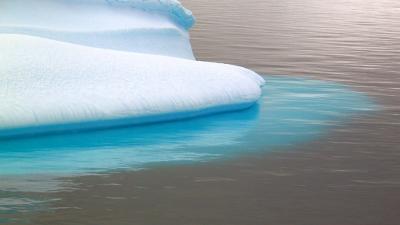 Blue Ice, Antarctica, 2004
Blue icebergs are often seen floating in the channels that line the coast of the Antarctic Peninsula. Once again, I change pace by moving near and showing only a small, shimmering blue underwater edge of this huge iceberg. To me, the blue ice symbolizes a cold colder than cold ñ a valid symbol when it comes to a place were temperatures plunge and ice is forever.
12 comments leave a comment 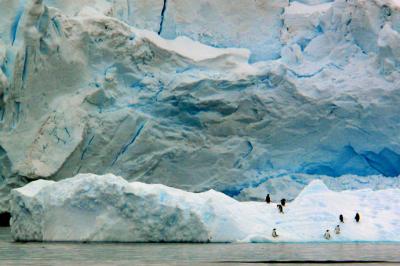 Welcoming Committee, Antarctica, 2004
This image is linked to the previous image by the blue ice ñ but here I reveal more of it. The tiny upright figures of eight Gentoo penguins form what seems to be a welcoming committee. Actually, penguins gather in groups at waterís edge because it is too dangerous for them to swim out for food individually. For these penguins, there is safety in numbers; one will warn the others if a foraging seal interrupts their hunt. Antarctica is all about survival, for animals and man alike. This photograph offers us insights into one mechanism of survival.
6 comments leave a comment 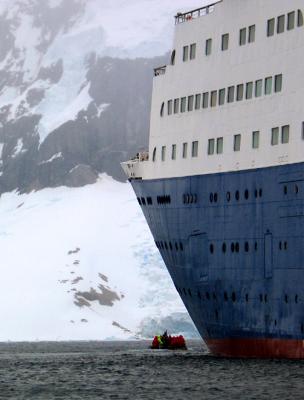 Landing Party, Antarctica, 2004
Although we saw and photographed Antarctica primarily from the comfort of a cruise ship, it was important to land on the continent, feel its ice and rock, and come face to face with hundreds of nesting penguins. In this image, I contrast the size of the large cruise ship and the massive snow-covered landscape behind it, to the tiny Zodiac ñ an inflated rubber boat filled with parka-clad tourists. Scale incongruities such as this one are a good way to express the size of things.
9 comments leave a comment 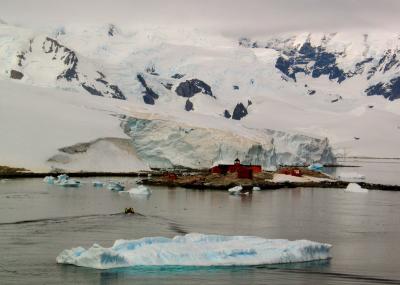 Waterboat Point, Paradise Harbor, Antarctica, 2004
The only people who live and work in Antarctica are researchers employed by various governments. At Waterboat Point, we visited a Chilean research station and the thousands of Gentoo Penguins and Blue-eyed Cormorants swarming over its grounds and buildings. Shot from the distant deck of our cruise ship, this research station is dwarfed by the frozen landscape that surrounds it. I waited for a Zodiac to reach a spot halfway between the iceberg in the foreground and the stationís landing area before I made this photo.
4 comments leave a comment 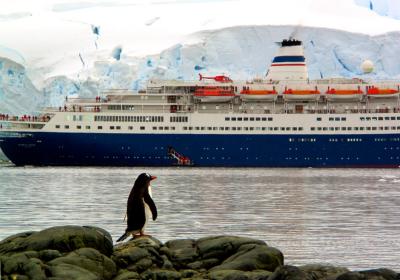 Entering Paradise, Antarctica, 2004
To make this shot of our cruise ship at anchor in Paradise Harbor, I landed on Waterboat Point and photographed a solitary Gentoo Penguin gazing intently at this huge floating hotel. This is first is a series of three close-up photographs of Gentoos in this essay, and no two of them alike in either content or form. In a photo-essay, redundant picture usage must be avoided at all costs. Each and every shot must make its own point and make it well.
20 comments leave a comment 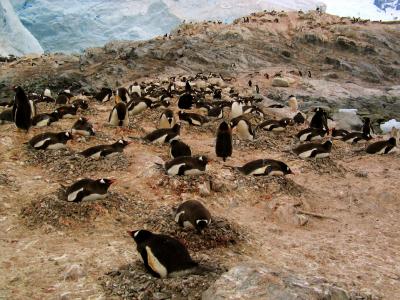 Gentoo Penguin Rookery, Paradise Harbor, Antarctica, 2004
A wideangle converter lens was an essential tool for this shot of nesting Gentoos. This image is all about numbers ñ the penguin colony seems to go on forever. The previous shot shows but one penguin ñ this one includes hundreds. Some sit on their eggs, sheltered in nests made of rocks. Others stand watch, guarding the nests from marauding birds. I moved my camera down to ground level and moved in as closely as I could to the foreground nest without disturbing the penguins.
13 comments leave a comment 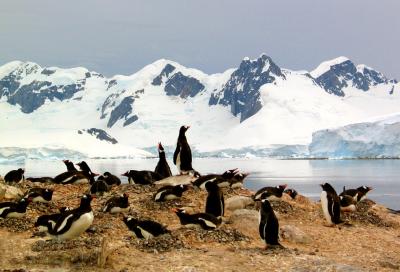 On Guard, Paradise Harbor, Antarctica, 2004Guard Duty, Paradise Harbor, Antarctica, 2004
For this, my final penguin image, I emphasize the Antarctic landscape and include a group of about 30 Gentoos. Using a telephoto converter lens, I waited for the penguins at the center of this grouping to reflect their watchfulness. As one of them let out a piercing cry, another looked out to sea, and I had this shot.
6 comments leave a comment

Floating Dream, Antarctica, 2004
Because Antarctica is so ìother-worldlyî, a visit is often likened to a dream. The final third of my photographic essay reflects these dream-like aspects of Antarctica. The first of these five final images confronts us with a bizarre blue and white iceberg that seems to bear a figurehead at its front ñ it was as if the ghost of an 18th Century ship came sweeping past us, a reminder of those who came through these very waters during the great age of polar exploration.
12 comments leave a comment

Monoscape, Trinity Island, Antarctica, 2004
Nature created this abstraction ñ a mass of snow and clouds embracing the distant jet black mountains of Trinity Island. I shot it in color, but there is none of it here ñ only a dream-like swirling monochromatic mass of snow, ice, clouds, and rock to prod the human imagination and bring meaning to this awesomely empty place.
7 comments leave a comment