Gallery Thirty Seven: As others see me 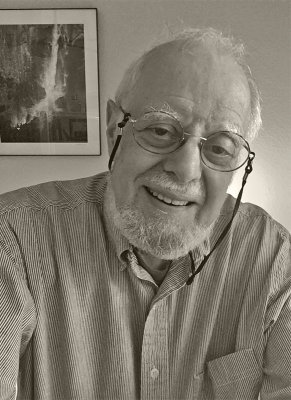 iPhone selfie, Phoenix, Arizona, 2018
I rarely make selfies, but felt it was about time to try one. I used window lighting, and include one of my favorite images, a framed photograph of Bridal Veil Falls in Yosemite National Park, in the background. It adds a bit of context to the image. I converted it to black and white and warmed it a touch with sepia to remove the color on the wall, the colors on me, and the color in the photograph. All that color competed with the subject of the picture: myself.
9 comments leave a comment 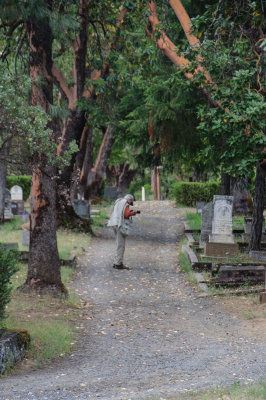 A man in a favored place to find expressive images, by Tim May, Jacksonville, Oregon, 2009
Tim finds me here me at work in a favored place, indeed. I am fascinated by the past, and how people, in their grief, create funerary monuments to remember their loved ones. Tim devotes most of this image to my surroundings, a vast cemetery in Jacksonville, Oregon. There is a sense of tranquility here. Symbolically, Tim portrays me as “pausing along the road of life” amidst reminders of those who have already traveled that path. Tim also makes sure to feature the dead leaves that litter its length. He also contrasts my size, as well as the small scale of the gravestones, to the massive arch of living trees that fill the frame overhead. Tim and I are shooting together at the same time and in the same place. Yet he is telling a different story than I am with the image I am making at this moment. The grave marker before me is white, while those that surround it are gray. By using my spot meter, I make the gray stones, shrouded in shadow, much darker. You can see my image, and the sad story it tells, here: http://www.pbase.com/pnd1/image/114571835/original
2 comments leave a comment 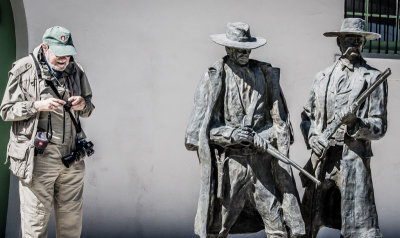 Wild West, by Tim May, Tucson, Arizona, 2009
I saw this shot for the first time in the spring of 2015, a full six years after Tim May made it just outside of Tucson's Amtrak Station. He found me photographing the life-sized sculptures of famed lawmen Wyatt Earp and Doc Holliday, which stand on the station's platform. The statues commemorate Earp's "Vendetta Ride" following the murder of his brother Morgan in the aftermath of the 1881 gunfight at Tombstone's OK Corral. Earp and Holliday pursued Frank Stilwell, one of Morgan's killers, to Tucson, and killed him at this train station. Tim finds a moment in time when my arms echo the body language of the statues. My face is partially hidden by my cap, while the faces of the statues are obscured in shadow. Tim desaturated this image to "make me appear more like the statues I am standing next to."
6 comments leave a comment 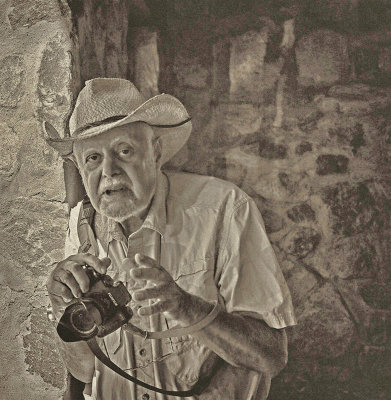 Teaching, by Britta Higgins, Scottsdale, Arizona, 2014
Britta Higgins made this striking portrait of me as part of an exercise in portraiture during her field work in a one on one tutorial. She selected an area in a nearby shopping center that was finished in rough hewn stonework. I stood in a spot where light faded into deep shadow, and I was instructing her in the use of spot metering to "paint a portrait with light and shadow." That is exactly what she does here. Britta's portrait captures my enthusiasm for teaching, which I express through gesture and expression. The colors in this image were significantly altered by the vast contrast between light and shadow in the image. I later converted her image to a light sepia tone, which removes those problematical colors and replaces them with a vintage mood, right out of the old west.
9 comments leave a comment 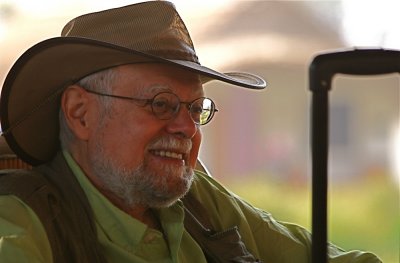 Portrait, by Kathy Khuner, Ranthambore, India, 2008
Kathy Khuner, a pbase photographer whose work can be seen at http://www.pbase.com/kjkhuner, made this portrait of me just before leaving for a game drive through India’s Ranthambore Tiger Reserve back in 2008. (She found this image in her files and sent it on to me in 2011. I am a little older and perhaps somewhat wiser, but the essentials are the same.) I wear this outback hat for shoots in the sun. It has a cord that I use to lash it to my head while riding in windy, uncovered vehicles. It also offers a ventilated crown, which I find ideal for keeping cool. I like this portrait because it finds me relatively relaxed and comfortable in my surroundings.
13 comments leave a comment 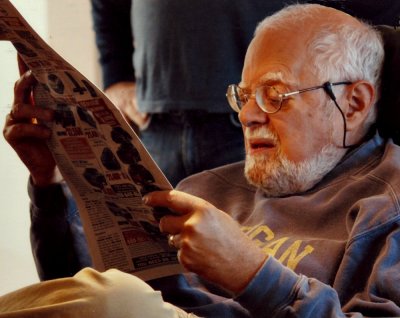 Relaxation, by Connor Whooley, Phoenix, Arizona, 2010
Most of the images in this gallery were made of me either making photographs or else talking about them. In this case, my 17 year old grandson caught me over the Thanksgiving weekend relaxing at home in my favorite chair with a newspaper in hand. (A closer study shows that I am actually reading about cameras and electronics – subjects never far from my mind.) What I like most about this shot is the way Connor uses the newspaper as a reflector to bounce window light back on to my face. I am also wearing an ancient University of Michigan sweatshirt – which I traditionally don on the day of Michigan’s annual season-ending game with Ohio State. Despite Michigan’s painfully lopsided loss, I seem to have nicely recovered my equilibrium here. Photographs can say much about people, active or not. In this case it is the relative inactivity that tells the story. (I made this image by scanning a snapshot, which accounts for the lack of info on the camera used, exposure, etc.)
5 comments leave a comment 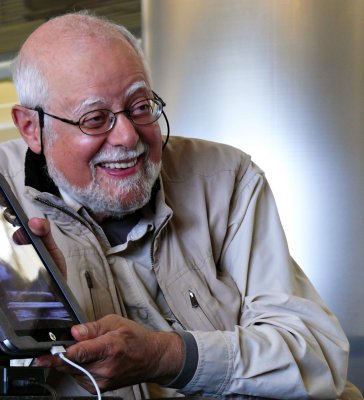 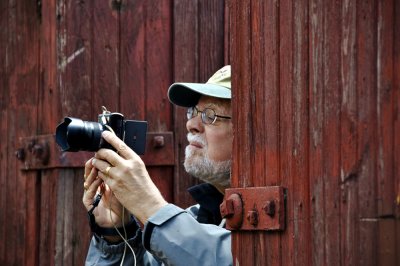 Finding ghosts, by Tim May, Nevada City, Montana, 2010
I was framing a shot from between abandoned freight cars near the Nevada City ghost town when my friend pbase artist Tim May made this image of me. Tim uses the rail cars to abstract most of me – they show the wear and tear of time, which was exactly what I was searching for in my own shot.
6 comments leave a comment 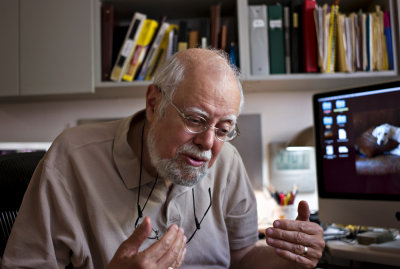 The teacher, by Rusty Latshaw, Phoenix, Arizona, 2009
Rusty Latshaw ( http://www.pbase.com/russellt ) has traveled from Pennsylvania to Arizona four times since 2006 to work with me in my one on one tutorial training sessions. He made dozens of images of me during the two days we worked together, but the one we both liked the best was this portrait he made of me working with him in my office. He catches a characteristic hand gesture – I was expressing how and why I feel about the point at hand, and I seem to be referring to myself by bringing my hands towards myself. He also frames me within my environment, surrounded by the softly focused stuff that accompanies my iMac computer. (We can even see about half of my dog curled up within my desktop image.) And finally, there are all those pairs of glasses. I was wearing my computer glasses at the moment, but my regular glasses hang from my neck so I don’t have to hunt them down when I next need them. I think this is among the most expressive images as I’ve seen of myself in the role of a teacher.
16 comments leave a comment 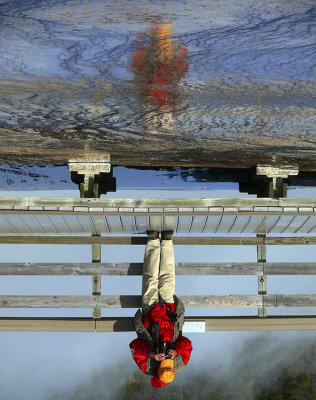 At Midway Basin, by Rosemarie Astwood, Yellowstone National Park, 2008
I was delighted to find this image in Rosemarie’s latest Yellowstone gallery on pbase ( http://www.pbase.com/sunlightpix/yellowstone_country_2008 ) She writes in her caption: “Phil is an outstanding photographer and has taught me many lessons, including composing with less sky, and looking at things in new ways. I observed him enraptured with a composition, and took his portrait, then flipped it upside down. Phil seems so happy taking pictures – he reminds me of Fred Astaire in the movie “Royal Wedding,” when he’s so happy that he dances upside down on the ceiling.”
I left this comment for Rosemarie: “This is a remarkable image – the flip does wonders for it, and so do the primary colors of my parka and hat. I can vouch for the happy feeling I get when making pictures, but I am considered a hazard on the dance floor.”
Rosemarie responds: “I was drawn to the primary colors when I composed this portrait. You are the red and yellow, combined with the blue into a trio of bold color. I was very careful to not include any sky, since I was getting a deeper blue from the reflection. And the steam makes a great background. Then I wanted to take it to another level to try to capture the “head over heels” joy that photography imparts.”
With this image, Rosemarie shows us that a successful portrait need not always show human features – but it should always express something about the character or interests of the subject. In this case, her image says that I love what I do, and that I often try to do it in a colorful way, Fred Astaire not withstanding.
13 comments leave a comment 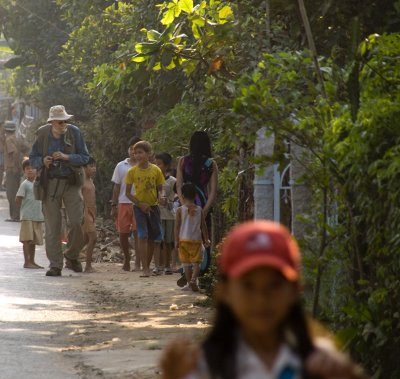 Pied Piper, by Tim May, Long Xuyen, Vietnam, 2008
They seldom see tourists in Long Xuyen. And so we drew a crowd of children wherever we walked in this Mekong River town. In this image, pbase artist Tim May catches me doing my best Pied Piper impersonation. No matter where we walked in this neighborhood of Long Xuyen, groups of laughing children followed us. They were fascinated with my camera, and at one point we must have had twenty kids watching, and commenting upon, our every move. None of them asked us for money, and none tried to sell us trinkets, as children did in other Vietnamese cities. All they wanted to do was to follow us, watch us, laugh at us and with us. To these children, I must have like an absurd visitor from another planet, making pictures of ordinary things they all took for granted. Seeing myself here as they must have seen me, I’d have to agree.
0 comments leave a comment 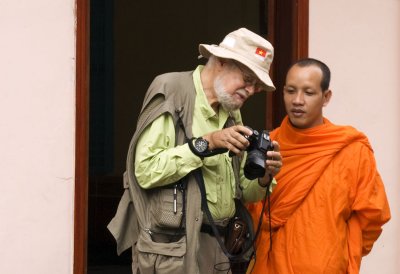 Sharing, by Tim May, Can Tho, Vietnam, 2008
This image offers a great contrast in cultural trappings – I am draped in flopping masses of green and khaki, while the monk is draped in a simple orange robe. I am giving him a two minute crash course in expressive photography, and although he might not have understood all of my words, I hoped that he would understand the universal language of photography. I am amused by seeing all of the technology I have come to take for granted when I am shooting in the field – I rely on two digital cameras, a large watch, a handy pen, not to mention all the other stuff that is bulging in the pockets of my photographer’s vest and the computer, and battery chargers awaiting me back in the hotel room. I even wear a tiny Vietnamese flag on my floppy ventilated hat – a gesture of recognition to all of the kind people I encountered in the streets and fields of Vietnam, people just like this gracious monk who so patiently observes me here at my great passion -- teaching. Thanks, Tim, for making this example showing how others saw me in the streets of Vietnam in the first week of 2008.
12 comments leave a comment