Gallery Ten: A Walk in the Park – only minutes away 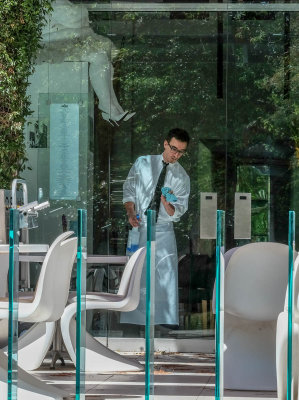 Dream Clean, Scottsdale, Arizona, 2016
Restaurants line the perimeter of the park at Scottsdale’s Civic Center Mall. As I passed this one, I noticed a waiter intent on making his establishment’s front door free of all fingerprints. He scrubs away, entirely oblivious to those female legs incongruously hanging over his shoulder in upper right background. Her shoes seem ready to slip from her feet. Our eyes flow through the glass panels marking the boundary of the restaurant’s patio. They all point towards the action of the waiter and those strange legs in the background. He uses a blue rag to polish the door, a perfect color match for the blue edges of the rhythmically repeating glass panels. The incongruity here is at the heart of the image, largely due to those dangling legs. They actually belong to a full- sized sculpture of a woman sitting on a partial wall inside the restaurant. Without the legs, this picture would just be a nice photo of a waiter at work. With them, our imagination sees a scene right out of a dream.
6 comments leave a comment 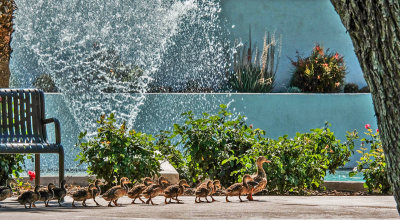 Ducklings on parade, Scottsdale, Arizona, 2016
I use a series of four horizontal panels to organize this scene of a mother duck leading her brood of more than a dozen ducklings on a lunchtime hunt. My tutorial student and I followed these creatures as they combed the grassy slopes of the Scottsdale Civic Center Mall for meal morsels. The feed itself was an unimpressive subject. The ducks were generally facing away from us, often in shade, and their faces were often obscured. They were on their way back to one of the park’s reflecting pools when I made this image. Here they appear in striking profile, walking nearly two by two, their parade echoing the horizontal line of shrubs behind them, the horizontal flow of the pool, and a horizontal blue wall on the other side of the pool, topped by a row of plantings. The entire image seems to be on the move with the ducklings. A glorious fan of water spouting from the pool’s fountain dominates the image and crowns the image with celebratory symbolism.
4 comments leave a comment 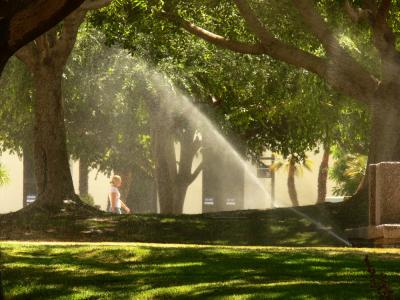 Greenery, Scottsdale, Arizona, 2006
The lush green lawns and trees of this park are regularly bathed in sprays of water that periodically erupt from sprinklers set into the ground. I use a telephoto focal length to create this layered image – anchored by a dappled green foreground. A slight hill framed by two large trees blocks the lower half of a woman walking just behind it. She leads a small child, whose head can just barely be seen to the right of the left hand tree. The six trees behind them fill the background with green leaves that cover half the frame. But the keys to the image are the two sprinklers that bathe the scene in droplets of water, creating a misty atmosphere as they dampen the scene. The incongruously casual attitude of the woman suggests that she somehow manages to elude a soaking.
4 comments leave a comment 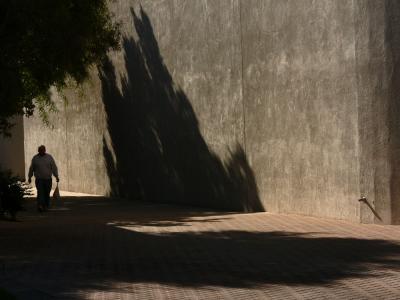 Shadows, Scottsdale, Arizona, 2005
I don’t look for subjects to shoot when I walk through this park. I look for how light and shadow defines and abstracts those subjects. I saw the massive shadows that the noon time sun was casting on the plaza and on the wall of Scottsdale’s Performing Arts Center. The shadows alone were not enough to make the image work as expression for me. I waited for a person to enter my frame, and I abstracted him as well by shooting him just as he entered the shadow of the tree. He carries a bag in his hand, and ignores the huge shadows that threaten to engulf him. But we can see what he cannot. He appears to be entering a stark and mysterious world, and our imaginations enter it with him.
4 comments leave a comment 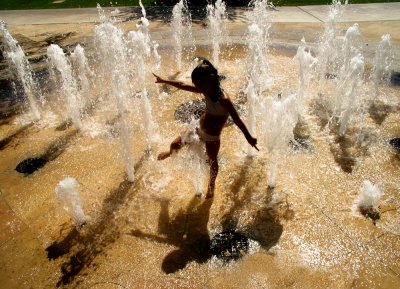 Fountain dancer, Scottsdale, Arizona, 2003
This unique park fountain offers welcome relief from the heat of an Arizona summer. I found this youngster dodging its jets -- she virtually dances between the spouts. I used a fast shutter speed (1/640th of a second) to stop her action as she balanced herself on one toe – her fingers extended as if she was daring them to soak her. I shot into the sun to abstract her. Instead of describing her appearance and joyful expression, I reduce her to a virtual silhouette, eliminating her identity, and turning her into a symbol of childhood exuberance.
4 comments leave a comment 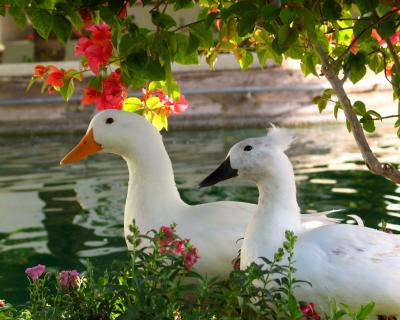 Waterfowl, Scottsdale, Arizona, 2003
When I found this pair of birds resting in the shade of the bushes next to a pond on Scottsdale’s Civic Plaza, I looked for a vantage point that would compare and contrast their similarities and differences. I choose a low camera position to refer them to the water in the background, and to stress the striking differences in the coloration of their bills and hairdos. By framing them in this foliage, I soften the scene, and give these birds a sense of scale. Placing a 245mm tele-converter lens over the zoom lens of my digital camera allows me to shoot from far enough away so as not to disturb the birds, and to partially blur the background for better definition. I move my camera ever so slightly to place the black bill of one of these birds into the curve of the neck of other, intensifying the bond between them.
13 comments leave a comment 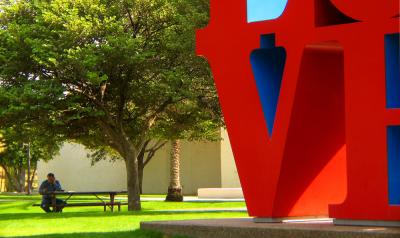 Taking the call, Scottsdale, Arizona, 2003
Robert Indiana’s ubiquitous “Love” sculpture provides suitable context for this shot of a visitor taking a call while perched precisely at one end of a picnic table. I use my frame to abstract the sculpture – revealing only enough of it to identify the work. This picture is about contrast in scale. The towering trees that shade the park, and the huge letters of the sculpture, dwarf the distant figure at the picnic table. His legs rhythmically repeat the angles of the letter “V” in the sculpture – it was this geometry that initially drew my attention to what becomes an incongruous juxtaposition of man and sculpture.
6 comments leave a comment 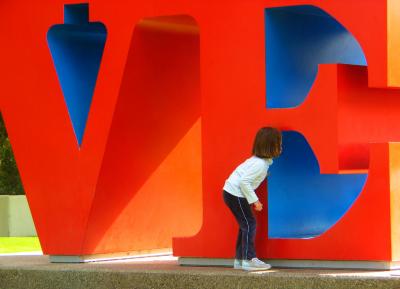 Looking into Love, Scottsdale, Arizona, 2003
While working on variations of the previous picture, I noticed a child approach Robert Indiana’s “Love” sculpture and I shifted gears and began to investigate a new set of options. I switch my attention from the fellow on the phone to this child’s interest in art. I wait for her to peer into the lower part of the big “E”, and as she leans into it, I align the angle of her back with the golden light reflecting on the side of the “V” just behind her. I don’t show her face – I want to abstract this shot down to the flow of angles. I also want my viewers to imagine the expression on the little girl’s face instead of actually seeing it. This sculpture is so pervasive in our culture that revealing just two of its letters is enough context to make this photograph live up to the title I give it.
23 comments leave a comment 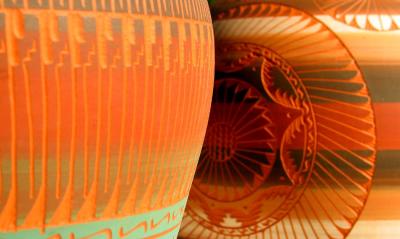 Native American Pottery, Scottsdale, Arizona, 2003
During one of my two-hour walks through the park, I came upon a number of Native American artisans displaying their art and craft. I was drawn to the contrasting designs and colors on two pieces of pottery, and use the macro setting on my camera to bring my lens within inches of them, juxtaposing design and color as intimately as possible. I focus on the edge of the left pot – everything else in this image is softly suggested instead of sharply defined. I use my frame to eliminate the shapes of the pots, leaving only the colors and designs as contrasting elements. The result: a symbolic abstract of Southwestern Indian Art, and a thematic introduction to the two images to follow in this gallery.
5 comments leave a comment 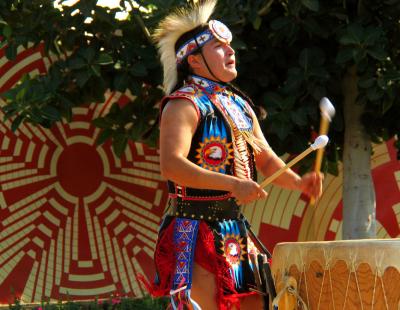 The Beat, Scottsdale, Arizona, 2003
In the middle of Scottsdale’s Civic Plaza is a large stage, facing a vast lawn. As we walked through the Plaza’s parks, we heard the familiar chanting of Native American voices coming from that stage, punctuated by thundering drumbeats. Not only did we photograph birds, art, and children at play during our two hours in this park, but a stirring cultural performance as well. To define the energy of this drummer, I both stop and blur his action. One drumstick moves too fast for my shutter to freeze it. It expresses energy that brings meaning to this photograph. The performer stands out from the striking backdrop because it is shaded and he is not. The 245mm tele-converter lens places the background into soft focus.
0 comments leave a comment 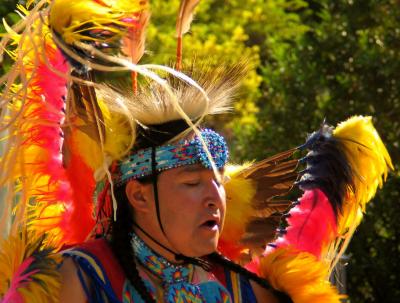 The Dancer, Scottsdale, Arizona, 2003
There are many ways to express the beauty of dance with a camera. We can blur action (as I did in my image of Russian folk dancers at: http://www.pbase.com/image/20798795) or we can stop action as I do in this shot of a Native American dancer in mid-performance. What tell us that he is dancing is not his arms or feet, but the slight blur in the feathers that float above his head. This abstracted approach works as an expression of a dance performance because of the emphasis on costume, color, and facial expression. It seems as if he has danced himself into a trance -- his eyes are shut, mouth open, and his face is framed in the vivid primary colors of his costume. The rest is left to our imaginations.
2 comments leave a comment 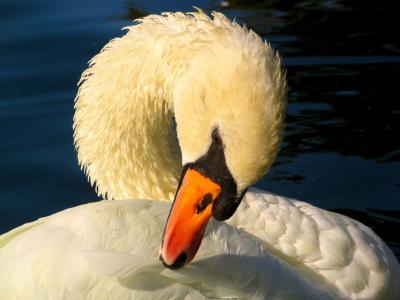 Preening, Scottsdale, Arizona, 2003
Using a tele-converter lens, I use this intimate close-up of a preening swan as the first shot in a three-picture sequence. I pay as much attention to the negative space in this picture as the positive space – the indigo blue water of the pond framing the swan’s head and wings is as important as the swan itself. It gives contrast, context, and depth to the image, and allows me to stress the coloration and texture of the swan’s feathers without distraction. I use a balanced composition to emphasize the curving symmetry of the swan’s neck, head, and beak.
7 comments leave a comment