Gallery Fifty Eight: Man and nature -- expressing our relationship with the environment 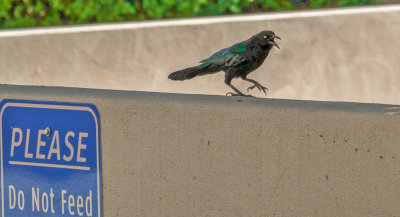 Agitated, Scottsdale, Arizona, 2017
I noticed this blue “Please do not feed” signage first, and waited to see if any of the many birds in the area would dare to approach it. In a matter of moments, this very agitated bird landed on top of the wall, right next to the signage. It strutted past the sign and into my frame. I made this image just as the bird was moving forward. Its beak is wide open and its yellow eye seems to stare accusingly at us. We can only imagine what must be bugging it.
As for me, I intend this image as a commentary on two factors that seem to be in conflict here. Birds usually hang around public parks, primarily to be either fed by humans or to scavenge their refuse. Yet this park clearly tells its patrons not to feed birds. The bird in question here seems to be “putting its foot down” in favor of a free meal.
2 comments leave a comment 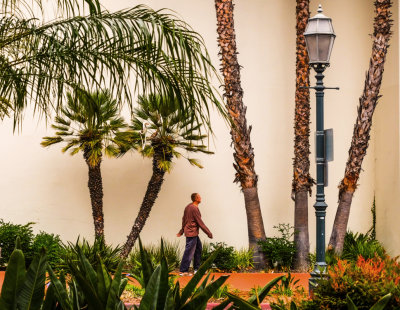 Urban palms, State Street, Santa Barbara, California, 2014
Palms and plantings line the State Street sidewalks that flow past Santa Barbara’s most upscale shops. I framed this incongruous shot so that the single pedestrian in my image appears to be wandering alone through a tropical forest. The only things in this image that are made by the hand of man are the sidewalk, a building, and the vintage metal and glass street lamp that magically rises through the palms to create this urban landscape.
0 comments leave a comment 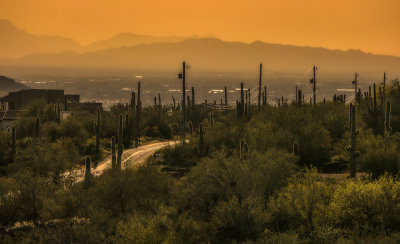 Sunset vista from Gold Canyon, Arizona, 2013
I made this image from the foothills of the Superstition Mountains, about 30 miles east of Phoenix. Dozens of slender Saguaro Cactus plants echo the repeating utility poles that line a suburban roadway at left. The work of man and the product of nature mingle in the dusk, as the eye sweeps back into a vista of the metropolitan area known as the “Valley of the Sun.” It is indeed the golden light of the sun itself that creates the atmosphere and mood of this image. As we move back towards the layers of mountains in the background, we can even make out the tiny cluster of transmission towers atop Phoenix’s well-known South Mountain at the upper center of the image. While much of the foreground, as well the massive mountains in the distance, are the work of nature, the work of man carries the eye deep into this image. The road at left leads the eye towards the far distant transmission towers on South Mountain, which, in turn, echoes the upright line of utility poles in the foreground. There is a large home at the left edge of the frame, and the sun reflects off the rooftops of distant buildings that fill the valley beyond.
0 comments leave a comment 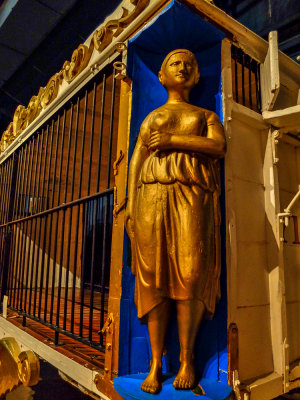 Gilded cage, Ringling Circus Museum, Sarasota, Florida, 2013
The lavishly painted and decorated cages that line this museum once held powerful circus animals, such as lions and tigers. My photograph stresses a carved, toga-clad wooden figure dominating a corner of one of those cages and symbolizing classical history. The statue, and indeed the entire cage, is painted gold, the color of wealth. Spectators were once expected to stand awestruck before this splendid work of man, while the animals – a product of the natural world – were destined to pace nervously back and forth within the confines of the iron bars that fill much of the frame. No matter how ornate the cage might be, and how benign the purpose of a pleasurable circus, I intend this image to express man’s cruel dominance over the most impressive creatures of nature, even when they may be packaged in a gilded cage adorned with tasteful allegorical figures.
0 comments leave a comment 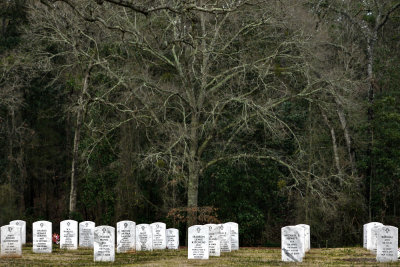 Natural embrace, Andersonville National Cemetery, Andersonville, Georgia, 2013
The branches of a huge tree embrace these graves of American military casualties from World War II, as well as those from the Korean and Vietnam conflicts. It seems as if nature itself is watching over its own here, and in a way, it is. Man, while often at odds with the natural world, is also a product of that world. This massive tree is so much larger than the grave stones, which means it has been here at least as long as they have, and perhaps even longer. My image asks the viewer a simple question: if this huge tree could think, one wonders what conclusions it might come up with.
2 comments leave a comment 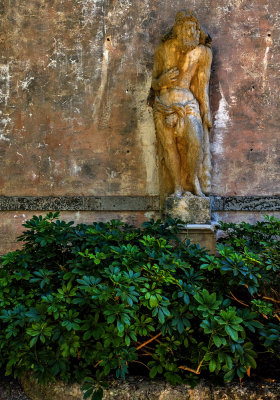 Emergence, Vizcaya Gardens, Miami, Florida, 2013
Vizcaya was once the palatial winter home of James Deering, who gained his great wealth when J.P. Morgan purchased his Deering Harvester Company in 1902 and merged it with the McCormick Reaper Company to form International Harvester. Deering built this 180-acre estate between 1914 and 1916. We did not tour his lavishly decorated home because photography is prohibited. Instead we concentrated on Vizcaya’s gardens, one of the best examples of Italian garden design in the United States. I made this image in one of the many walled nooks where Deering’s architects placed 200 year old sculptures that once were on display in Venice, Italy. Most of the sculpted figures are characters from classical mythology, including this bearded sculpture that seems to emerge from the wall behind it, rising from a lush bed of plantings at its feet. The fresh green plantings represent the natural world– they regenerate every year and are carefully nurtured. The stone wall and the sculpted figure looming above these plants can symbolize the aspirations of man, such as power, wealth and knowledge. The plants remain pristine, while the figure and wall show the wear of time.
0 comments leave a comment 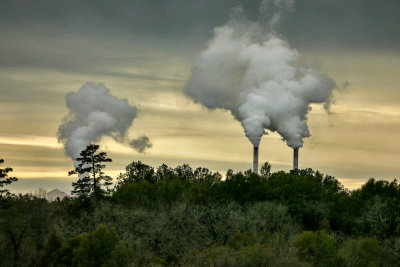 Intrusion, Andersonville, Georgia, 2013
While photographing at the site of the infamous Andersonville Civil War prison camp, I found still another story to tell – this one etched in the sky beyond the forests enclosing this national historic site. The stark chimneys of neighboring industrial facilities are disgorging massive quantities of cloud like material, and pouring it into the luminous cloudscape designed by nature itself – a scene already in place. Man’s own clouds, whether made of smoke or steam, polluted or unpolluted, prove incongruously out of place here.
0 comments leave a comment 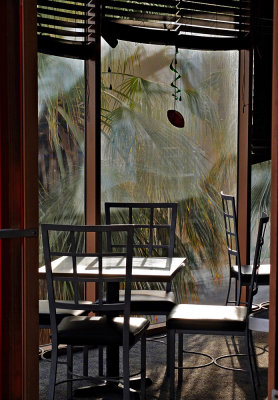 Confrontation, Palm Springs, California, 2013
The jaws of a massive palm tree, clawing at the window of a local sports bar, seem about to devour all that lies within. Meanwhile, an incongruously small decorative football dangles in its path, creating a symbolic confrontation between man and nature. The room seems to be abandoned, as if all who once celebrated here have fled before nature’s onslaught. The play of light and shadow on the scene adds an emotional touch to the image -- the surreal reflections on the glass window mysteriously paint the palm as in a curtain of glowing, foggy light.
4 comments leave a comment 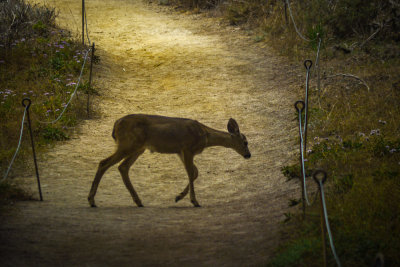 Fawn, Point Lobos State Natural Reserve, California, 2012
As I walked the trails of this nature reserve, a deer suddenly appeared before me with her fawn in tow. I allowed the deer to cross the trail, and waited for the fawn to reach its midpoint before I made this image. In doing so, I place the fawn precisely between two rope fences, symbolizing both the presence and purposes of man. The ropes are there to protect the delicate products of nature on either side of the trail. Yet the fawn, also a natural creature, is suspended here between the ropes, gingerly crossing a trail built both for the convenience of man and for the protection of nature. The late afternoon backlight and my tight framing serve to abstract and simplify the subject, making it more symbolic and less descriptive.
0 comments leave a comment 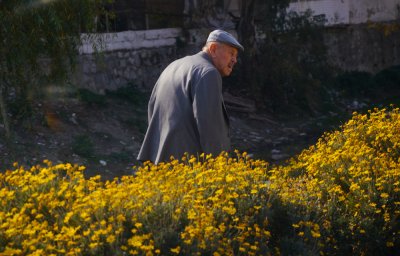 Afternoon walk, Soke, Turkey, 2011
I photographed this man trudging along the road beside a bank of vivid yellow wildflowers. He hunches forward, bearing an expression of haste on his face. This image asks us to wonder if he would ever stop to study these blossoms, or perhaps even appreciate their smell. I made the shot the front seat from a moving tour bus. I could see both the man and the flowers coming up when we were a block away, and was well prepared to catch his expression as we rushed past him.
0 comments leave a comment 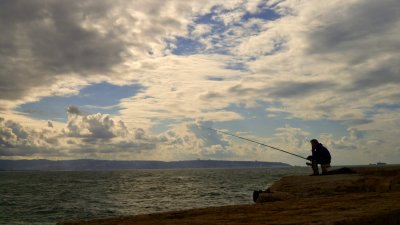 Fisherman, Acre, Israel, 2011
This fisherman was kneeling on the top of Acre’s historic sea wall, first built by the Crusaders, and improved by the conquering Ottomans. He seems reflective – one wonders if he is thinking about the history beneath his knee, or the fish he dreams of catching? I liked the way my 24mm wideangle lens embraces the assorted clouds, the waters of Acre’s harbor, and the distant shoreline as well. All are provided to this man as a gift of nature – even the fish as yet unseen and uncaught.
0 comments leave a comment 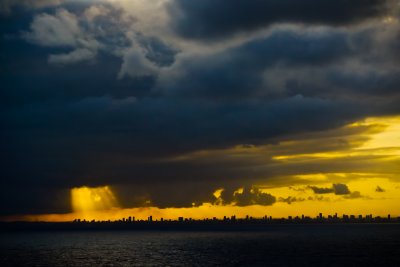 Arrival, Recife, Brazil, 2010
The jagged skyline of Recife looms in the distance, its man-made towers dwarfed by nature’s impressive display of storm clouds overhead. Our cruise ship neared Recife’s harbor just as the sun was setting behind the clouds, and I made this image just as a shaft of sunlight appeared within a sharply defined notch over the city. No matter how vast a city (Recife, Brazil’s sixth largest metropolitan area, holds nearly four million people), nature always holds the upper hand.
4 comments leave a comment