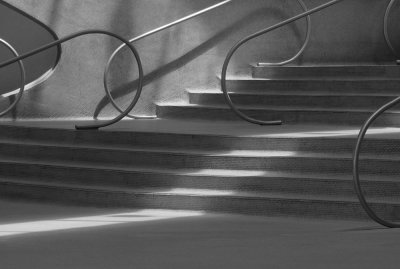 Early light, Arrivals Hall, TWA Hotel, JFK Airport, New York, New York, 2019
To make expressive images using light and shadow to shape meaning, we need to change the way we look for our subject matter. Much of the time, photographers look for interesting or meaningful subject matter simply for its own sake. Instead, we need to look instead at how light can reveal and shadows can simultaneously hide our subject matter, creating its own rhythms, patterns, and flow to express meaning on its own. This image presents a good example of such an approach.
I was stunned at the beauty of the new TWA Hotel -- its great public spaces were once a spectacular air terminal of an airline that went bankrupt. I was having breakfast in what once was that terminal's arrivals hall. It had just been repurposed as the spectacular lobby of the only hotel within New York's JFK Airport.
As i sipped my morning coffee, my gaze happened to settle on the stairway leading from the hotel's lounge down into its lobby. It was a vast stairway, busy with people. Yet the final pair of landings were illuminated with lovely morning light and accompanying shadows. I noticed the gentle play of light and shadow on those final nine steps, as well as the way the sunlight defined the graceful handrails and concrete frame that surrounded them.
This image works best for me -- the flow of light and shadow here defines the act of movement itself and express the beauty and meaning of the architecture of the entire terminal, which is designed to emulate flight itself. Flight is movement, and these steps come to life as movement on their own at only a few moments each day -- when light and shadow simultaneously reveal the nature of the subject itself, as well as its meaning.
0 comments leave a comment 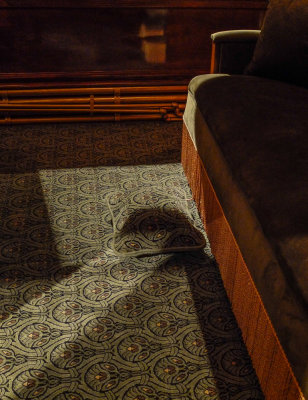 Circus train, Ringling Circus Museum, Sarasota, Florida, 2013
The private sleeping car of John Ringling, who once owned every traveling circus in America, is among the features of Sarasota’s Ringling Circus Museum. I photographed Ringling’s own stateroom through an open window, a compartment bathed in panels of geometric light and shadow. A pillow, which once served as Ringling’s own footrest, is upholstered in the original carpet material, making it seem almost ghostly as it blends into the floor at the apex of my triangular composition. We can almost feel the past here, alive within the shadows.
0 comments leave a comment 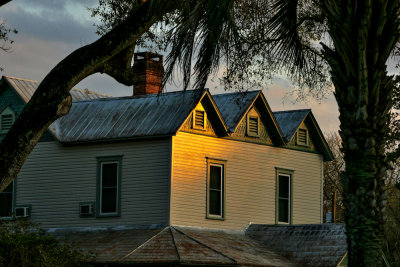 Sunset, High Springs, Florida, 2013
The golden evening light illuminates the upper story of one of High Spring’s vintage houses. I frame the house within an arch of trees, which helps to stress to repeating rhythms of its gabled roofs. The glow of the sunset elevates the image from a description to an expression. It takes us back in time and evokes nostalgic ideas about a rural small town from another era.
0 comments leave a comment 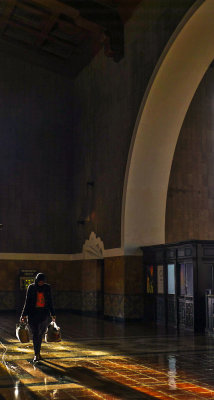 Union Station, Los Angeles, California, 2012
The last of the great railway stations, the Union Station in Los Angeles opened in 1939 and has been serving California travelers for more than 60 years. Its spectacular “Streamline Moderne” style has remained intact through the years, serving Amtrak customers as well as commuter, subway, and bus passengers. I focus here on a sole traveler entering the vast waiting room late in the afternoon. As she stepped into a pool of light, shopping bags in hand, I abstract her as a symbolic representative of all the passengers who have passed through this historic building over the years. The light illuminates her shape from behind, while the shadows minimize descriptive appearance. The sweep of a huge arch in the background echoes the flow of curving light on her body and head.
9 comments leave a comment 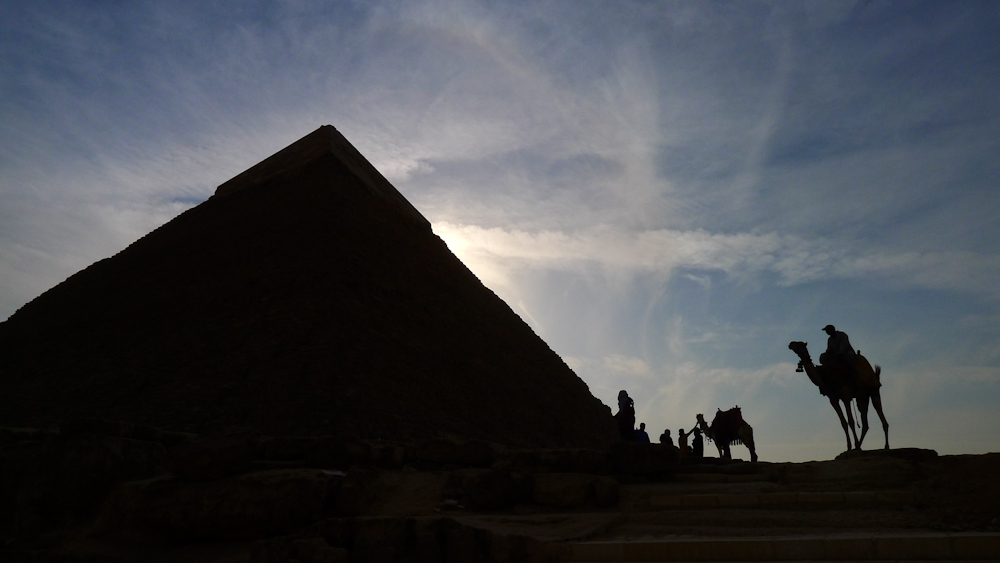 Ancient scene, the Pyramids, Cairo, Egypt, 2011
By abstracting the pyramid and surrounding camels through backlighting, I am able to make a picture that is utterly timeless (except for fading jet contrails glowing the overhead sky). I moved my vantage point to place the sun behind the bulk of the pyramid, and spot metered on its glowing edge. The silhouetted pair of camels, along with a cluster of tourists, is linked to the pyramid as a single monochromatic entity. I needed to shoot this scene from a fairly close distance in order to make the camels and people large enough to make an impact. The image required the use of a 24mm wideangle lens, enabling me to include most of the vast pyramid in the frame from such a close distance.
0 comments leave a comment 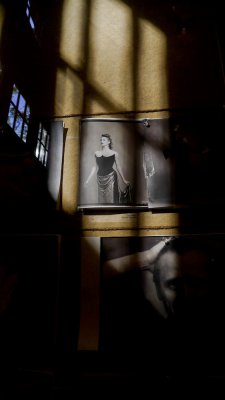 Photo exhibit, Jacob’s Pillow Dance Festival, Becket, Massachusetts, 2011
Several hundred work-prints by the portrait photographer Annie Liebovitz are currently on exhibition in a barn on the grounds of the Jacob’s Pillow Dance Festival. I photographed a small section of the exhibit, wrapping it in the shadows cast by a barn window. Several windows are also reflected in the glass panels protecting the photographs. Liebovitz conceived the exhibition especially for the dance festival to salute the 50th anniversary of the Mark Morris Dance Group. By photographing photographs embraced by light and shadow, I recognize the very nature of the medium itself.
6 comments leave a comment 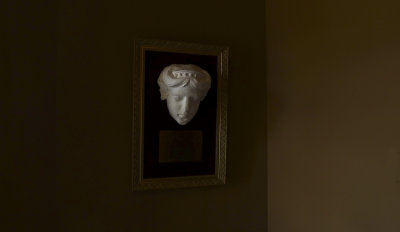 Mask, Colonial Theatre, Pittsfield, Massachusetts, 2011
The mask seems to be floating towards us. I create this illusion by spot metering on the white plaster and allowing the rest of the image to recede into the shadows. The image speaks of another time, as does this historic theatre, which was founded in 1903.
0 comments leave a comment 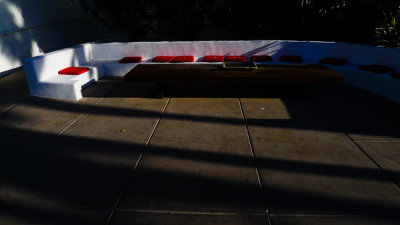 Hotel, Scottsdale, Arizona, 2011
There is no sign of activity at this luxury resort. What kindled my interest was the way the late afternoon light and shadow plays with the massive empty couch at the hotel’s entrance. The scene is essentially monochromatic, except for the brilliant red cushions that sit unused on long seating surface. The extended shadows on the concrete echo the horizontal flow of the extended couch, which seems to move from the light at left into the darkness at right. I used a 24mm wideangle lens and spot-metering mode to expose for the white couch and allow the shadows and surroundings to fade to black.
0 comments leave a comment 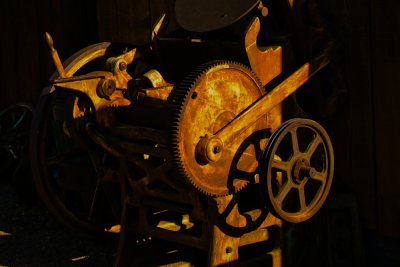 Golden machinery, Goldfield, Arizona, 2011
Goldfield was built to support a gold mine that operated here from 1893 to 1926. This gold mining equipment has been rusting unused for the last 85 years, and nature has provided it with a golden patina, accentuated here by evening light. I used my spot-metering mode to expose for the highlights, and allow much of the image to fall into the shadows of time.
2 comments leave a comment 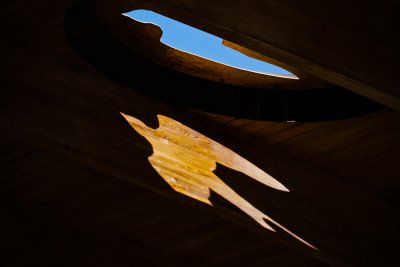 Imagination Gives Us Wings, Main Library, Scottsdale, Arizona, 2011
Sunlight moves, and artist Larry Kirkland has used it to create one of the most popular public artworks in Scottsdale. He carved the shape of a bird into the roof over the entrance to the Scottsdale Library. As the sun moves across the sky, the bird appears to move across the interior of the roof over the entrance. I photograph both the roof carving and the illuminated bird as they came together late in the afternoon. (The artist also created a huge golden feather of gilded aluminum that is suspended over the entrance. Your can see my image of it at: http://www.pbase.com/pnd1/image/113688088 Both the bird and the feather make up a two-part work of art called “Imagination Gives Us Wings.”)
0 comments leave a comment 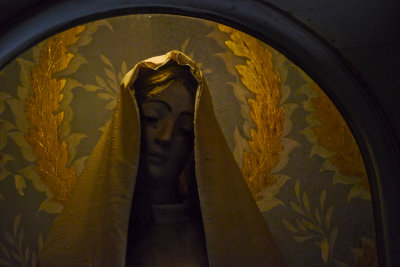 Sainthood, St. Francis Church, Salvador de Bahia
The light was coming from behind this icon, illuminating a golden wreath that celebrates the worthiness of what appears to be a saintly figure, as well as the top of the hood that crowns its head. The face of the saint was in deep shadow. Instead of exposing for the face, I expose here for the illuminated wreath and hood instead. The shadowy face expresses the mystery that often cloaks the nature of sainthood.
0 comments leave a comment 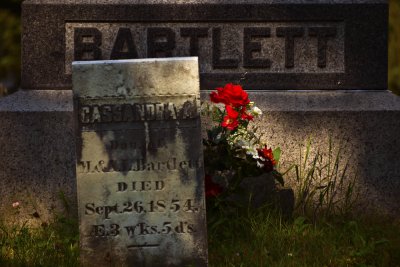 Grave of Cassandra Bartlett, West Dover, Vermont, 2010
Cassandra Bartlett died in 1854, after living for only three weeks and five days. Artificial flowers still mark her tiny grave. A shaft of late afternoon sun illuminates the red petals and the corner of her stone. By spot metering on the flower, I can make the façade of her gravestone, and the family marker just behind it, fall into shadow. The mood I’ve tried to create here is one of sadness, intensified by the play of light and shadow upon the grave.
0 comments leave a comment