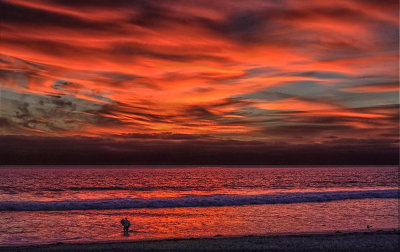 Fire and water, Imperial Beach, California, 2014
I conclude this gallery with this image of nature cloaked in its most supernatural and surreal colors. The sun has set, but the conditions for this image existed much earlier, as a partial cloud cover moved into position over the ocean, and a cloudbank formed in the distance. Once the sun had set, this cloudbank would help push the lingering pink, red, and orange reflections skyward. The ocean itself turned a purplish pink. All I needed was a human figure to give the image a touch of scale incongruity, and a distant surfer obliged by moving into the lower right hand corner of my frame.
Some might wonder if I created these striking color effects in the computer after making this picture. I did not. The colors here are exactly as I saw them in life – it was a dream-like display of color and light, nature’s own fireworks challenging our imagination and stunning our eyes. I have rarely, if ever, seen such a sight before, and I was able to make it work as a photograph by shooting dozens of images of this scene, metering on different parts of the picture, placing the horizon in different positions, and waiting for various people to move in and out of my frame. In this particular image, I placed the horizon lower in the frame to give more space to the spectacular mass of clouds that blaze like fire through the upper half of the frame. I also spot-metered on the brightest cloud in the upper center of the frame, and the rest of the image fell into place just the way I wanted it to.
2 comments leave a comment