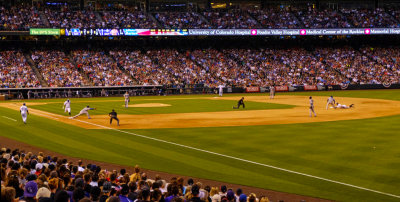 In play, Coors Field, Denver, Colorado, 2014
Most photos of sports action are made from close range, in order to express both emotional and athletic content. However in this case, I was seated in a far corner of the stadium, and was not equipped with the specialized long telephoto lenses required for most sports action photography. Instead, I take advantage of this moment when the entire baseball diamond itself is involved in the action during a game between the Colorado Rockies (in white) and the visiting Los Angeles Dodgers (in gray). I easily embrace the entire scene as a long horizontal image, using my frame to tell the story of a particular moment in the game involving at least eleven people -- players, coaches, and umpires. We see a Rockies base runner about to touch first base while the Dodger fielder awaits a throw. Meanwhile, we see another Rockies base runner sprawled on the ground at second base while a Dodger fielder looms over him. Two umpires in black intently study the situations at first and second base, while two Rockies coaches, along with two Dodger infielders and the Dodger pitcher watch the chaos unfolding around them. A slice of the 50,000 spectators in attendance make up the background and foreground. The white foul line leads us into the action from the lower right hand corner of the frame, while the illuminated panels of advertising slicing across the top of the image echo the horizontal sweep of the baseball diamond below it. Where is the ball itself at this moment? It is most likely in flight, although it is too small to be visible in this shot. What we see here instead are the rhythms of the game itself on simultaneous display, placed, spaced, and paced within a long horizontal frame that displays the action before us.
2 comments leave a comment 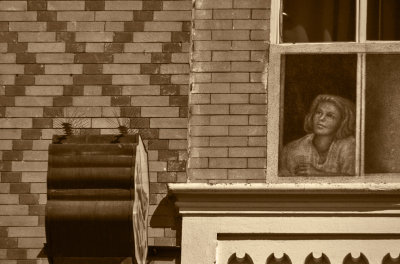 The woman in the window, Venice Beach, California, 2012
I framed this image to emphasize a wistful, faded painted portrait of a woman filling one of four window panels set into a building overlooking one of the most popular beaches in the Los Angeles area. I added a sepia tint to this image, removing the diversion of a bright red sign at left, as well as giving the image a nostalgic mood. The woman in the window seems to become more life-like in sepia.
I deliberately used framing to isolate the painting by bisecting the entire window itself, drawing the eye to the painting. The eye then moves towards the top of that sign, mounted on the decorative patterned brickwork. My framing abstracts the sign, as well as the ornate woodwork below the windows. The entire image becomes more abstract, as the formerly red sign and the woodwork are suggested, rather than described. The only element within the frame remaining whole is the portrait, which now is able to ask more questions than it answers.
0 comments leave a comment 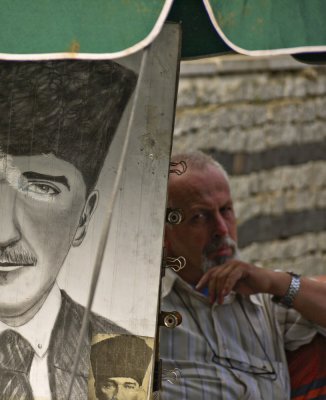 Sidewalk artist, Istanbul, Turkey, 2009
I based this image on the nature of the frame itself. A frame is boundary, and I use it here to abstract the image and reinforce the role of the frame as part of the artistic process. I deliberately slice the painting in half vertically and at the same time slice into the artist with it. A smaller version of the painting is horizontally sliced in half by my frame at the bottom. The painting itself ironically remains unframed.
2 comments leave a comment 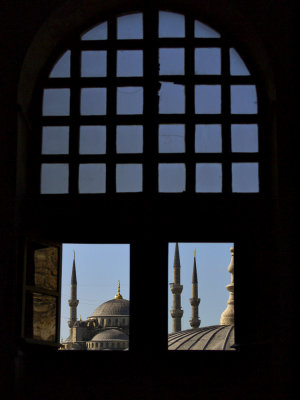 The Blue Mosque, as seen from Hagia Sofia, Istanbul, Turkey, 2009
There are 30 frames within this window, all but two of them containing nothing but clear blue sky. The two large frames at bottom contain the famous Blue Mosque, and part of the one of the domes of Hagia Sofia, the oldest cathedral in the world. The array of frames in this 1,400 year old window form a pattern that suggests both unity and fragmentation.
4 comments leave a comment 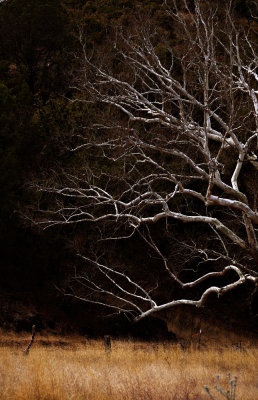 Barren branches, Harshaw, Arizona, 2009
I use my frame to abstract a barren tree, dividing it in half and leaving the trunk out of the image. The framing forces the imagination of the viewer to see the trunk and the other half of the tree in their mind’s eye. It also increases the energy of the branches, which seem to be reaching for help. By eliminating the central trunk, I’ve made the branches somehow fly on their own.
2 comments leave a comment 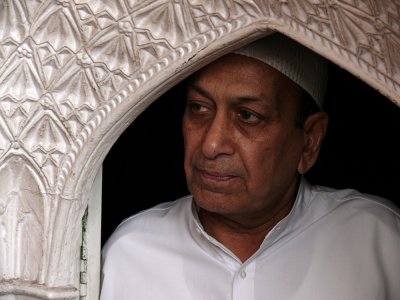 Keeper of the holy relics, Jama Mosque, Old Delhi, India, 2008
This man was showing our group some of the mosque’s holy relics. Rather than show the relics, I concentrated on the expressions of the man who was showing them to us. He was framed by the small arched door leading to the space that held the relics. I made that door frame part of my own frame, layering the image and creating a sense of depth perception in the process.
2 comments leave a comment 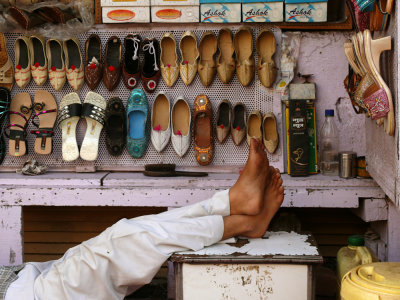 Shoe store, Agra, India, 2008
I use my frame here to humorously juxtapose the bare feet of the shopkeeper with over a dozen pair of shoes.
10 comments leave a comment 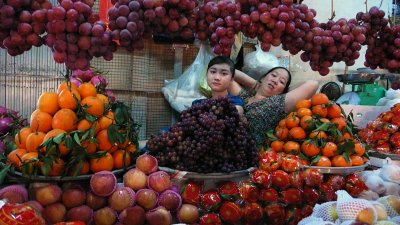 Fruitful frame, Ben Tre, Vietnam, 2008
I enjoy finding and using frames within my own frames, not for aesthetic purposes, but rather to reinforce what I am trying to say. It must have been a slow day at the Ben Tre market, because these women seemed very relaxed, particularly the woman resting on her arms in the background. I immediately noticed that they had festooned the top of their stall with bunches of red grapes. By moving in on those grapes with a 28mm wideangle lens, I was able to expand my image, getting close enough to the relatively small grapes to completely border the top of my own frame with them, and also include both vendors behind the piles of apples, oranges, and grapes that filled the foreground. By creating a frame of fruit within my own frame, I intensify the point of the picture – these are fruit vendors, and what they sell is both fresh and bountiful.
2 comments leave a comment 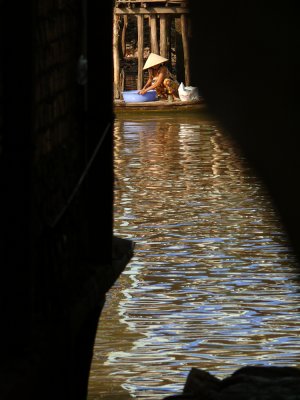 Washing in the Mekong, Long Xuyen, Vietnam, 2008
A long narrow alley between a busy city street and the Mekong River gives me an opportunity to frame a woman doing her washing as if we were looking at her through a keyhole. The jagged sides are the result of twists and turns in the alley itself, which, in turn, reshape the Mekong itself into a long reflection-filled sliver of water. Without the woman in the conical hat, the image would not say what it says – this is a quick and narrow glimpse of daily life in Vietnam’s Mekong Delta, where the Mekong and hard work combine to become the washing machine.
2 comments leave a comment 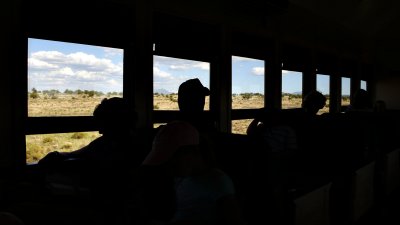 Aboard the Grand Canyon Railroad, near Williams, Arizona, 2007
I have turned seven windows of a railroad car into a series of frames looking out on to the rolling plains of Northern Arizona, by exposing for the exterior and allowing the interior and its passengers to become symbolic abstractions of a journey in progress. The steam-powered train is carrying tourists between the canyon and the small Arizona town of Williams. (For another image featuring this unique railroad, click on the thumbnail below. 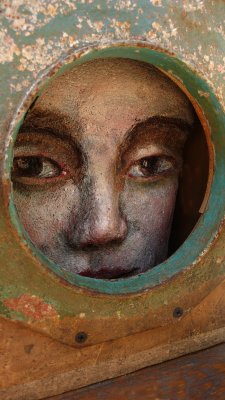 Porthole, Cherry Creek Arts Festival, Denver, Colorado, 2007
Sculptor John Whipple has framed the face of this subject in a porthole. I move in on this frame with my own frame. The closer I come to the subject, the more I limit context with my frame, and the more I can activate the imagination of my viewers. Those who actually viewed this work of art at a Denver's Cherry Creek Arts Festival saw it sitting on a table with other Whipple sculptures. But with this image, I can restrict vision by limiting the subject to just Whipple's own frame and nothing more. The result: a shockingly incongruously abstracted frame-in-frame image.
16 comments leave a comment 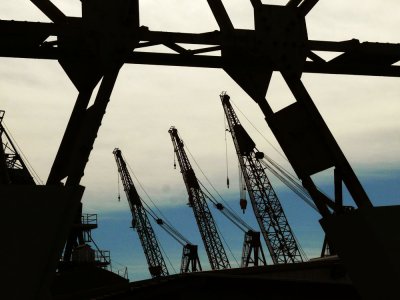 Mare Island Shipyard, San Francisco, California, 2007
This naval shipyard was established in 1854, and closed in 1996. It was the Navy's oldest base on the west coast, building 512 ships and repairing hundreds more. During World War II, the shipyard population reached 46,000. Today, its giant derricks stand silent. I placed three of those derricks within the metal framework of an abandoned dry-dock as a curtain of clouds descends upon them. This frame within a frame adds to the sense of isolation and desolation in the image.
8 comments leave a comment