Gallery Ninety-Six: From the Persian Gulf to the Andaman Sea 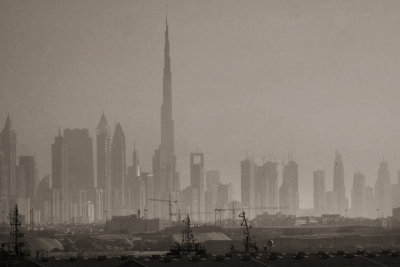 Bigger than big, Dubai, United Arab Emirates, 2016
I made this image from the deck of our cruise ship, just before we set sail on a 20 day journey from the Persian Gulf to the Andaman Sea. The haze of automotive pollution hangs over the city, abstracting the skyline and making it more symbolic than real. There are two striking incongruities in this image. One structure dominates the skyline. Incredibly and incongruously, it stands nearly twice as high as the normal skyscrapers that flank it. It is the Burj Khalifa, the tallest building in the world. The Burj and its neighbors are six miles away from me, allowing me to compare and contrast them to the miles of low structures that fill the foreground.
8 comments leave a comment

At the beach, Dubai, United Arab Emirates, 2016
I found these athletes working out on a sandy beach adjacent to the Persian Gulf. They were striking a balletic pose as I made this photograph. Yet each of them approaches the task differently. Some rigidly lift their linked hands high over their heads. Others create a graceful circle with their arms. Some seem to be dancing, while others are rooted in place. However all of them wear bright yellow shirts that link them as teammates and bond the individual athletes together as a single team. I cropped this image into a horizontal frame, echoing the horizontal arrangement of their bodies.
4 comments leave a comment 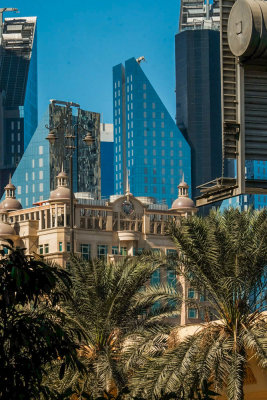 Illusion, Dubai, United Arab Emirates, 2016
The commercial heart of Dubai is a treasure trove of architectural illusion. I deliberately create layers of fantasy in this image to symbolize the freedom of expression that motivates this unique place. I anchor the image with a grove of palm trees at the bottom of the frame to give this image its sense of place. In the middle of the frame, I place a structure that evokes Victorian India, a nod to the millions of Indians who live and work here. The entire upper half of the frame is filled with modern commercial architecture that seems utterly unreal. Buildings rise at angles to each other, defying reality. Facades project illusions — we can’t quite make sense out of what we see. Such is the nature of this remarkable city that consistently confounds our expectations.
0 comments leave a comment 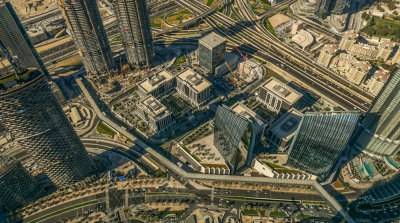 View from the top, Dubai, United Arab Emirates, 2016
I made this image by shooting straight down from the observatory tower at the top of the world’s highest building, the Burj Khalifa. The view from 124 stories above the city is dizzying, and this wide-angle photograph replicates that feeling. The cars at the intersecting streets below us look smaller than ants, and the huge buildings that flank the intersection seem trivial.
4 comments leave a comment 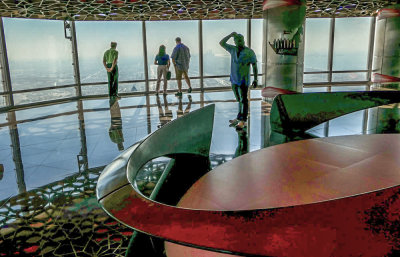 Disoriented, Dubai, United Arab Emirates, 2016
After making the preceding image, I stepped away from the window at the top of the world’s highest building and photographed some of the visitors who were visiting its observation tower. A man stands before the large copper sculpture in the middle of the room and scratches his head. He seems disoriented, wondering where to go next. Perhaps he is baffled by the meaning of the sculpture itself. He becomes our focal point, and all else becomes context.
2 comments leave a comment 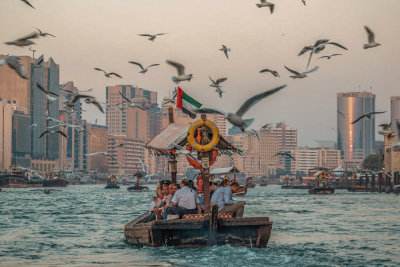 Crossing Dubai Creek, Dubai, United Arab Emirates, 2016
Water taxis crowd this creek at rush hour. Commuters leave their 21st century office suites to sit on wooden benches running down the center of a rickety craft that was probably designed in the 19th century. The creek has few bridges, making these taxis the quickest way to cross it. Clouds of seagulls engulf the taxis, looking for nourishment churned to the water’s surface by the taxi’s engine. I made this frenetic image from the bow of a water taxi, and photographed another just in front of us while using a long telephoto lens.
10 comments leave a comment 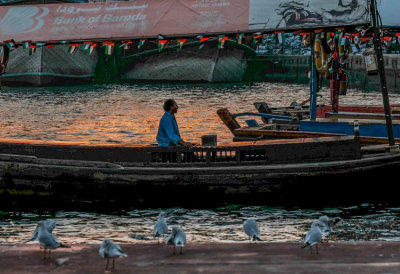 Solitude, Dubai Creek, Dubai, United Arab Emirates, 2016
This man sits alone in one of the many small boats docked at the water taxi pier along Dubai Creek. Perhaps he just wants to spend a few moments by himself as a setting sun illuminates the water behind him. He stares straight ahead, with only a smattering of seagulls for company. This image conveys a sense of mood and atmosphere, and also hints at loneliness
2 comments leave a comment 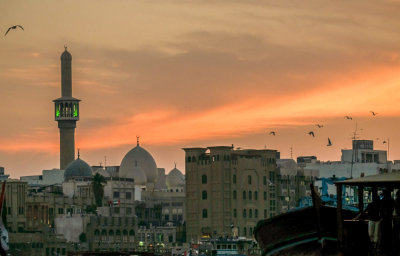 Old Dubai, United Arab Emirates, 2016
I made this photograph at the end of a ten-hour bus tour through much of Dubai. As the sun went down over the mosques of Old Dubai, seagulls make their way across a flaming sky as the Muslim call to prayer sounds over the loud speakers of a towering minaret. The architecture in this older area is that of a traditional Middle Eastern city, a far cry from the curving and soaring Las Vegas style towers of downtown Dubai. In this image, we see the essence of the city as it used to be.
0 comments leave a comment 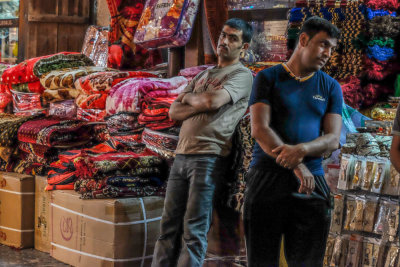 The Souk, Dubai, United Arab Emirates, 2016
The old section of Dubai offers a warren of narrow streets known as souks — the name for an Arab marketplace. This one is known as the “Spice Souk,” yet there were also numerous stalls selling colorful rugs, pillows and comforters. This is one of them, manned by a pair of salesmen that seem to barely tolerate my camera. They do not try to stop me from shooting — they remain silent, expressing their feelings through body language. The man at left stares at me with his arms crossed across his chest. Unlike many souk merchants, he did not try to sell his wares to me. His partner would not even look at me. He grasps one forearm and turns away. While they are not happy to be my subjects at this moment, they still allow me to make an image that expresses just such a feeling. I was also able to incongruously contrast their sulky responses to the array of colorful products on the tables behind them.
6 comments leave a comment 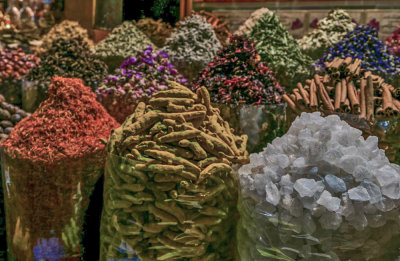 Spice Market, Dubai, United Arab Emirates, 2016
A spice market such as this one can stimulate all the senses simultaneously. We can see the vivid colors, smell the fragrant odors, hear the cries of the vendors, and if we should choose to buy, we can even touch the texture and taste the flavor. This image makes us aware of these sensations, and brings these spices into our presence. The textures, colors, shapes and arrangement of colors do more than just draw the eye. They prod the imagination.
2 comments leave a comment 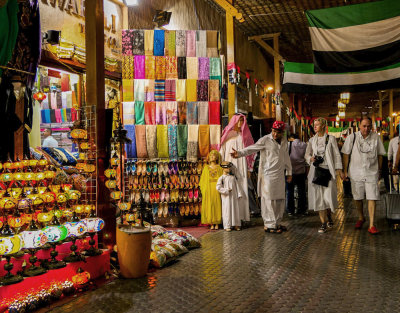 “Just take a look,” Gold Market, Dubai, United Arab Republic, 2016
The name “Gold Market” is designed purely for marketing purposes. This “market” in Dubai is actually an extremely long avenue of tourist shops selling everything from jewelry to jade. Here a “greeter” tries to convince potential customers to enter his shop. I catch this greeter and his potential customers at a decisive moment. For the “greeter,” it is the instant between success or failure. For the tourists, it is a moment of polite avoidance.
4 comments leave a comment 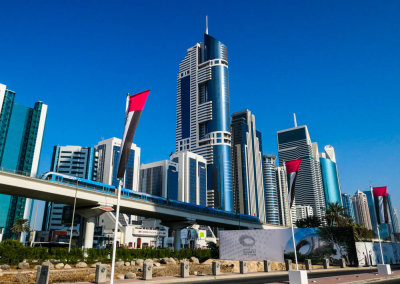 “City of the future,” Dubai, United Arab Republics, 2016
This is just a small section of Dubai’s commercial center. The Dubai Metro transit line runs through the foreground, and as I made this image, a train swept through my frame. The huge buildings offer a range of architectural tastes, dominated by a blue structure — its design both looks back to Art Deco, and ahead to the “City of the Future. It seems as if it is made of Legos. This image is saturated with primary colors. The blue sky provides a backdrop for the buildings, some of which also use blue for decorative emphasis. The train is blue as well. A row of commemorative banners, celebrating the 45th Anniversary of UAE, feature three red areas that that march horizontally across the image, matching the horizontal flow of the Dubai Metro and the skyline.
0 comments leave a comment