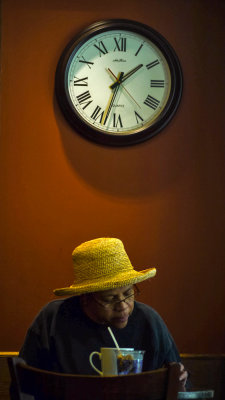 Passing time, Santa Cruz, California, 2012
The bright yellow hat of this diner drew my attention, and I built this image around the rhythmic echoes of both its implied circle, as well as the circular clock on the wall behind her. This picture asks the viewer to consider if she is really passing the time by drinking two beverages at once (hot and cold), or if one of them may belong to someone else, who has perhaps temporarily vacated the opposite chair? The image also speaks to the passage of time itself Ė the woman is oblivious to the large hands of the clock relentlessly recording each departing minute a only a few feet over her head. She seems otherwise occupied Ė possibly lost in the pages of a good read.
2 comments leave a comment 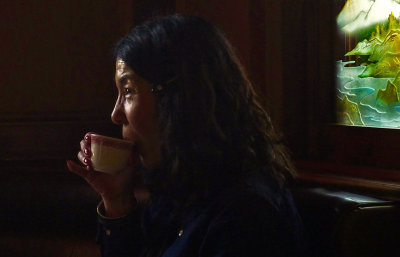 Tea in the shadows, Monterey, California, 2012
The early evening light illuminates the profile of this diner in a Chinese restaurant as she sips a cup of tea. Using my spot metering mode, I exposed for the highlights in this image, allowing the balance of the photograph to fall into the shadows that surround the diner and the translucent decorative frosted panel mounted on the back of her booth. The restrained light creates a subdued mode, a perfect match for a relaxing cup of tea marking the end of a satisfying meal.
0 comments leave a comment 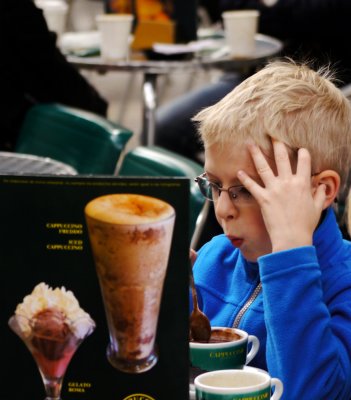 Anticipation, Barcelona, Spain, 2011
I photographed this young diner through the window of a restaurant near Barcelonaís Rambla. He appears to be stirring his cup of hot chocolate and blowing on it at the same time. The hand to head gesture suggests patience Ė he can see it, smell it, and presumably anticipates eventually tasting it.
2 comments leave a comment 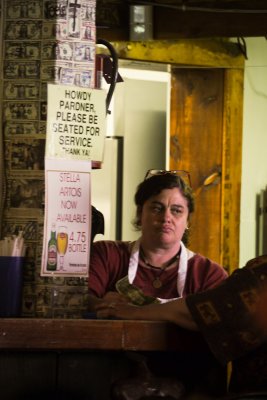 Waitress, Cafť, Tortilla Flat, Arizona, 2011
I made this character study from across the room with a 400mm focal length. A customer had just paid his bill, and the waitress was simultaneously giving him his change and responding to his comments. I liked her thoughtful expression, the folksy posters, and the dollar bills that paper this cafťís walls.
6 comments leave a comment 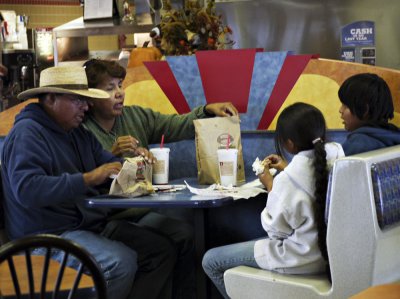 Navajo family, Kayenta, Arizona, 2009
The fast food restaurants of Kayenta seem to be community-gathering places in this Navajo Reservation town. I was drawn to the colorful booth, and made sure to include the back of the chair at lower left as an echo of the boothís curving wall. I made a number of images of this family as they interacted. Three of the four people here appear to be speaking here, while the fourth consumes her dinner. The adults seem to have things well under control.
0 comments leave a comment 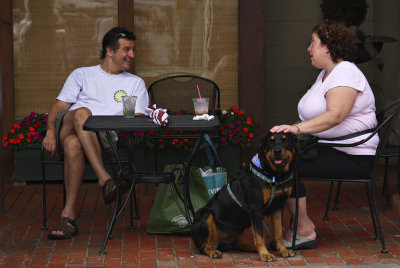 Sunday morning, Newburyport, Massachusetts, 2009
Dining out is a social event, even if but for a quick refreshment. I found this couple enjoying Sunday morning drinks in a busy outdoor cafť. The man seems to be a good listener, while the woman draws comfort from both the conversation and a well-mannered dog.
2 comments leave a comment 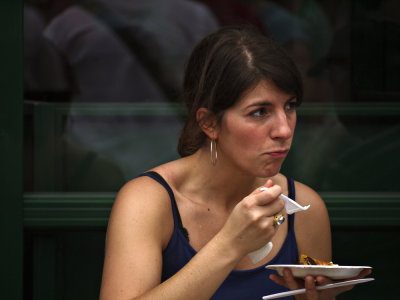 Judgment, Newburyport, Massachusetts, 2009
The sense of taste is at very heart of dining. Here a woman uses that sense as she evaluates a forkful of pie at a community event. Good? Not so good? I leave the answer to her and to my viewers.
4 comments leave a comment 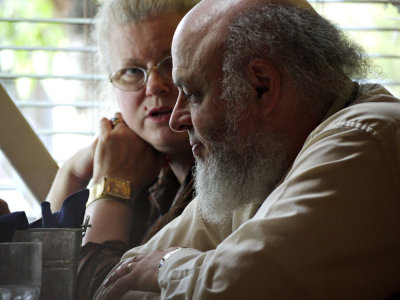 Conversation, Victoria, British Columbia, Canada, 2009
These people were conversing in a booth across the restaurant from us. They were sitting next to a window, which offered a degree of abstraction through back lighting. I focused on the man, who seems to be patiently listening here as the woman speaks to him. The backlight brings out the soft folds of his shirt, the glint on his jewelry, and outlines his profile with a glow. My 300mm focal length puts the woman into soft focus, but she, too, is softly illuminated. The tin buckets holding their napkins and utensils add a dining context.
0 comments leave a comment 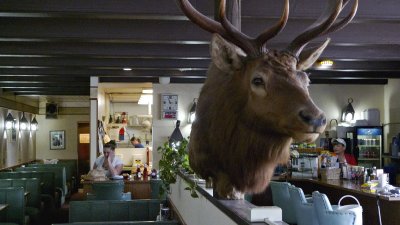 Elk, Forks Cafť, Forks, Washington, 2009
The small town of Forks is the only town on the western side of Olympic National Park on Washingtonís Olympic Peninsula. We stopped to eat at one of its restaurants. A huge head of a male elk is mounted directly above its booths. I found two of the restaurantís waitresses waiting behind counters at the back of the room while a cook works in its kitchen. One of the waitresses seems tired Ė she may have been working for hours and this seems to be a chance for her to find a moment of quiet. The incongruity of the massive elk head contrasts strongly with the slow pace of daily life in a small town restaurant.
4 comments leave a comment 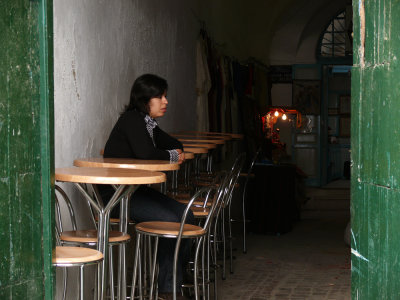 Alone, Tunis, Tunisia, 2008
A woman patiently waits for her tea in an empty Tunis cafe. She was the only customer, and appears to be alone. Maybe she is waiting for someone to join her? Or maybe she is a regular, and the wait is a daily routine. The image asks many questions of the viewer, and our answers will complete the story for each of us.
2 comments leave a comment 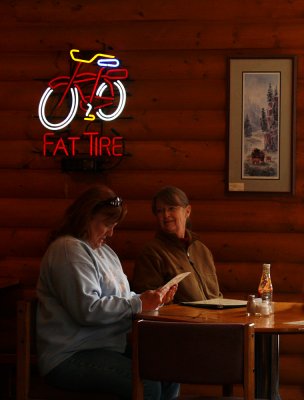 Choices, The Bistro, Cooke City, Montana, 2008
These tourists were sitting only a few feet from a window, which gives the image its soft light and gathering shadows. The neon sign above their heads advertises a local beer. I made numerous long telephoto images of these diners from a distance, while they were unaware of my presence. This was my favorite image, because it expresses the process of choice that diners encounter in any restaurant. The restaurant, constructed as a log cabin, was the only dining spot open for lunch in this small city just outside the Northeast Entrance of Yellowstone National Park. The painting above the table adds local context.
2 comments leave a comment 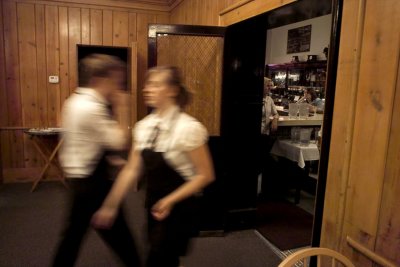 Evening Rush, The Bluebird, Logan, Utah, 2008
The historic Bluebird has been serving diners on Loganís main street since the 1920s.
While we were eating, I noticed the hectic pace of the wait staff. I increased the ISO rating to 800, which allowed me to make pictures inside of this restaurant without using a flash. My shutter speed was 1/15th of a second, which is ideal for expressing movement through blur. This combination of settings enabled me to express the brisk comings and goings of the restaurantís waiters and waitresses. I caught this pair just as they passed each other, going in opposite directions. Meanwhile, the people at the counter in the other room remain completely at ease.
6 comments leave a comment