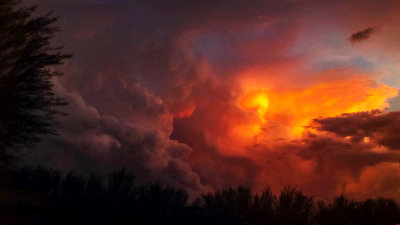 Under the storm, Phoenix, Arizona, 2015
A massive rainstorm hit Phoenix on October 17, 2015. It flooded streets and knocked out electrical power for thousands of residents. I grabbed this quick image with my iPhone just as the surging storm clouds overhead mingle with a desert sunset.The rain had already started to fall and darkness has come, yet small patches of the fiery sunset manage to break though the clouds at the leading edge of the storm. Framed by abstracted trees, the storm's billowing clouds, laden with moisture, express the explosive energy of nature itself.
10 comments leave a comment 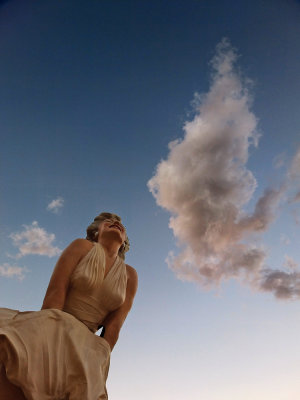 Forever Marilyn, Palm Springs, California, 2013
The dreamy exuberance of Seward Johnson’s massive sculpture of Marilyn Monroe, one of the 20th century’s most iconic actresses, is expressed by the pose she assumed in one of the most famous studio publicity shots of all time. That photo of Monroe standing on a subway grate, her dress is lifted by the rush of a passing train, was made to promote “The Seven Year Itch.” The sculpture, known as “Forever Marilyn” is on loan to Palm Springs. It will loom over the city's central intersection until June, 2013. In this photograph, I placed the top half of the sculpture between two clouds floating overhead. The larger cloud to her right seems both beautiful and vulnerable, almost to the point of fragility. Monroe bends forwards and ecstatically squints her eyes. She does not see this tear-shaped cloud drifting above her, but we do. If one knows the sad story of Monroe’s short and troubled life, that cloud could well serve as its exclamation point.
0 comments leave a comment 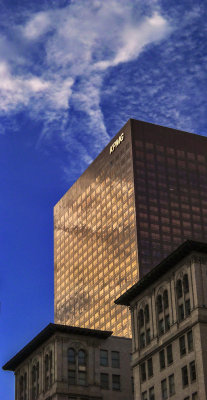 Transformation, Downtown Los Angeles, California, 2012
This image works with three elements to express the transformation of the downtown Los Angeles skyline over the last hundred years. At its base, matching office towers built in the early 20th century abruptly end their journey upward. They are ornate, yet dull in color and small in scale. In the middle of the frame, the soaring KPMG tower reflects the burnished gold of a setting sun on its sleek façade. And at the top of the image, a funnel shaped cloud seems to symbolically ignite the gilded reflections that illuminate the many windows of the skyscraper. This cloud is the key to the image – it makes it dynamic and expressive, rather than descriptive.
0 comments leave a comment 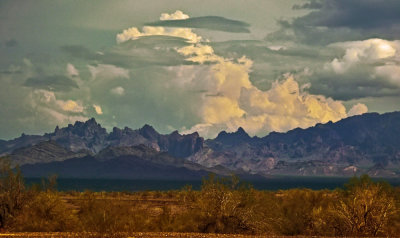 Eagletail Wilderness Area, near Tonopah, Arizona, 2012
I caught sight of these mountains while traveling between Los Angeles and Phoenix along Interstate 10. The mountains in themselves are impressive, but not in themselves worthy of a photo stop – we came through this area around three in the afternoon, and a high scorching sun rendered the scene essentially neutral. However, the weather gives us a bonus here. It is Arizona’s monsoon season and severe wind, dust, and rainstorms were in the area. Huge cumulous clouds, layered with bluish lenticular clouds, loom over the mountain range, and dictated a sudden stop. I scrambled up on to the shoulder of the highway and quickly made this image. Because of those clouds, this landscape changes from a post card view to an image of an oncoming deluge
0 comments leave a comment 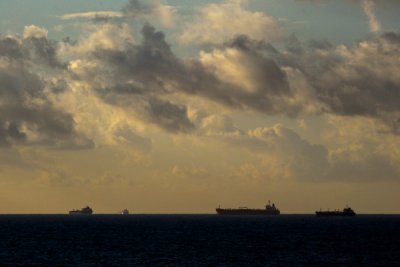 Tankers off Malta, 2011
The southern Mediterranean shipping channel narrows as it funnels ships around the island of Malta, which lies between Sicily and the Tunisian coast. The horizon fills with tankers as a feathery line of rain clouds follows their path across the top of my frame. I noticed that the shape of the large cloud just left of center seemed to echo the superstructure of the tanker just to the right of center and made this image from the balcony of my cruise ship cabin.
2 comments leave a comment 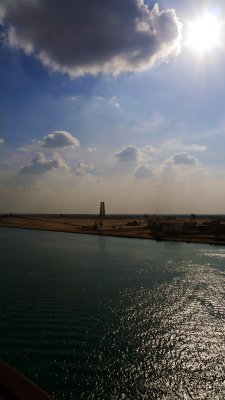 World War One Memorial, Suez Canal, Ismailia, Egypt, 2011
A single rain cloud slips past the sun and seems to spawn a family of similarly shaped but much smaller clouds over Egypt’s Suez Canal. The reflection of the sun on the canal offers a counter-balance to the huge cloud. Meanwhile, a towering memorial reaches toward those clouds in the center of the image. It honors the 30,000 Indian, British, and Australian troops who stopped the Turkish army from seizing the canal early in 1915. The focus of the attack was a key railroad junction here at Ismailia.
2 comments leave a comment 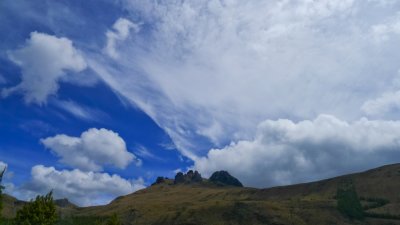 Leading lines, Cajas National Park, Ecuador, 2011
Nature gives me a perfect diagonal leading line here, the edge of a cloud mass that draws the eye to the distant Andean peaks that tower over one of Ecuador’s largest national parks, just an hour or so outside of Cuenca. While my 24mm wideangle focal length reduces the scale of the mountain peaks, they are easily located within the frame because of not only the striking diagonal edge of the cloud mass, but also because of the billowing line of clouds that creates another leading line just above the sloping horizon.
0 comments leave a comment 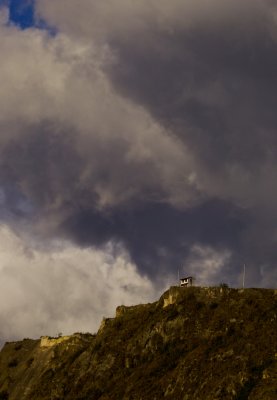 Mountain storm, Paccha, Ecuador, 2011
The lonely house stands as a sentinel on an Andean ridge high above the village of Paccha, a small town about an hour outside of Cuenca. The tiny building not only seems isolated and vulnerable by its position on the edge of the mountain ridge -- it is also dwarfed by the scale incongruity of the threatening storm clouds looming overhead.
0 comments leave a comment 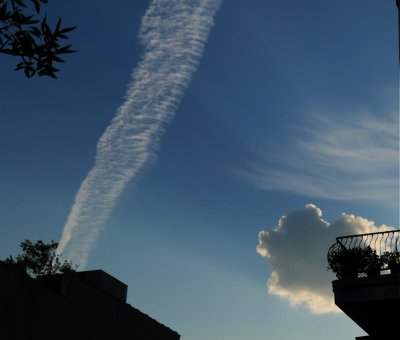 Evening sky, Brooklyn, New York, 2011
A huge dissolving vapor trail contrasts in scale to a small cumulous cloud, which in turn is paired with a thin cirrus cloud floating into the scene just above it. All of this activity is embraced by a triangular pattern of urban greenery in three of the four corners of the image. A setting sun backlights the clouds as well as the buildings that anchor the image.
0 comments leave a comment 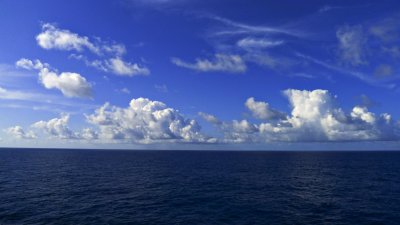 Infinity, off the coast of Brazil, 2010
There is always something to photograph on a cruise, even when the ship may be far out at sea. I enjoy finding cloud formations at sea that seem to tell a story on their own. Using a 24mm wideangle focal length, I was able to frame a series of clouds that seem to hang above the distant horizon, strung out over a velvety ocean along a deep blue sky. The image speaks of infinity – the scene appears to go on forever.
2 comments leave a comment 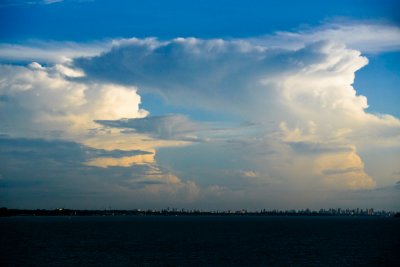 Clouds over the Amazon, Belem, Brazil, 2010
As we approached Belem, which sits at the mouth of the Amazon, an enormous cloud hovered over the city, dwarfing its skyline. This image defines the vast size of that cloud, using scale incongruity to tell the story.
2 comments leave a comment 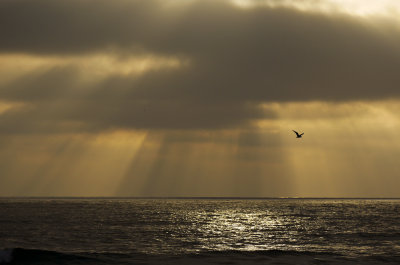 Storm over the Pacific, Mission Beach, San Diego, California, 2010
Clouds over water are often loaded with moisture, and when they become translucent via backlight, they often reveal striking textures and forms within. In this case, storm clouds off California’s Mission Beach cause rain showers to fall out to sea, and the patterns of those showers, when related to the early evening sun, become striking “God’s Rays.” No matter how evocative the pattern created by light, moisture, and clouds may be, it takes a flying gull to add a focal point here, a place for the eye to go. It seems to flee before the storm.
2 comments leave a comment