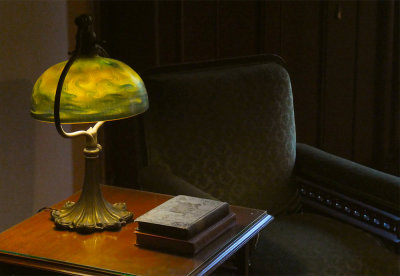 Jay Gould's Study, with lamp by Tiffany, Lyndhurst Mansion, Tarrytown, New York, 2019
Jay Gould was a leading American railroad developer and speculator. He has been portrayed as one of the ruthless robber barons of the Gilded Age, whose success at business made him one of the richest men of his era. He was hated and reviled, with few defenders then or now. He purchased the Lyndhurst Mansion and grounds in 1880, an estate of more than 400 acres overlooking the Hudson River.
I made this image in his private study. It is an image rich in both atmosphere and mood, and provides insight into the man himself. His massive, handmade armchair lurks in the shadows. Gould operated his businesses in the shadows as well. He was the ultimate insider, and his attempt to corner the gold market triggered the Black Friday panic of 1869. Black is dominant here. But Gould was also a man of impeccable taste. He had this elegant Art Nouveau lamp custom-made by Louis Comfort Tiffany, the most famous art glass designer of his time. The blackness of this image creates a mood of mystery and dread, while the warmth and color of Tiffany glass offers, as counterpoint, the atmosphere of the Gilded Age itself.
0 comments leave a comment 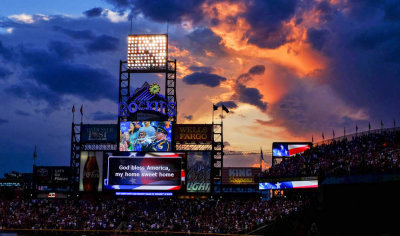 Seventh inning stretch, Coors Field, Denver, Colorado, 2014
Ever since terrorists brought down the World Trade Towers in New York City on September 11, 2001, it has become a tradition for baseball fans to recall the tragedy by honoring its armed forces at baseball games when the seventh inning rolls around. I attended a game in Denver during the Fourth of July weekend, and made this image of the stadium scoreboard during such a “seventh inning stretch.” The scene is dominated by its red, white, blue, and orange colors. All of the lights on the scoreboard have been extinguished except for the huge TV screen showing a military trumpeter playing “God Bless America,” a patriotic song originally written by composer Irving Berlin during World War I, and then revived during World War II. Its ending lyrics are displayed on another screen. Segments of the American flag momentarily replace the advertisements on other surrounding screens, enriching the color palette. Ultimately, it is the cloudscape itself that sets the mood and creates the atmosphere for this scene. It is the final light of day, and it comes to us as if it was a giant flag created by nature itself upon the sky.
0 comments leave a comment 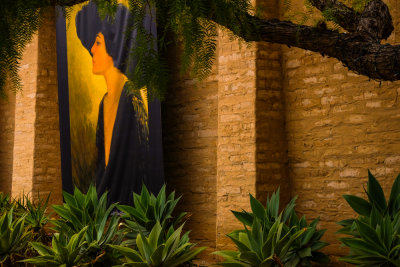 Nostalgia, Santa Barbara Historical Museum, Santa Barbara, California, 2014
I visited this museum in the hopes of making expressive photographs of its exhibits to help tell the story of this historic city. However, I was denied permission to make photographs inside the museum, so I departed and made this image of its exterior. While it can not offer visual insights into the local history that may dwell within, this photograph at least symbolizes an era that must have been one of Santa Barbara’s most colorful. A huge portrait of a woman wearing a 1920’s costume dominates the outside wall. It strikingly contrasts to the bed of desert plantings in the foreground and overhanging leaves of the tree that embraces the wall at the top. The golden colors of the painting and the rich greens of the foliage combine to project the nostalgic mood that dominates the image.
2 comments leave a comment 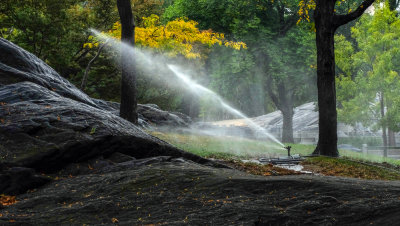 Watering Central Park, New York City, New York, 2013
This image expresses a mood of silent natural beauty. The early autumn morning scene contrasts the sweeping horizontal and diagonal thrusts of rock, water, and foliage to the surrounding vertical trees. I liked the way the huge rock outcropping glistens in the morning light, framed by the changing leaves of the season. The diagonal jet of water ties the entire image together, soaking the rocks, foliage, and trees in turn.
0 comments leave a comment 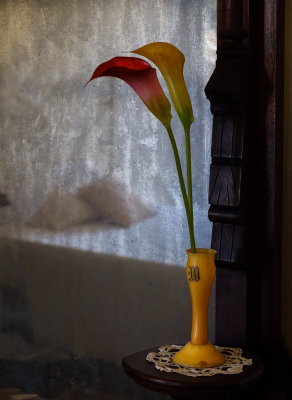 Bedroom, Koresham Utopian Community, Estero, Florida, 2013
The graceful Victorian era vase, long stemmed blossoms, and abstracted pillows reflected within a clouded glass mirror set the mood and create an atmospheric of a time long past. I made this image in an 1890’s home, part of a self-contained community that is amazingly preserved within this Florida State Historic Park.
0 comments leave a comment 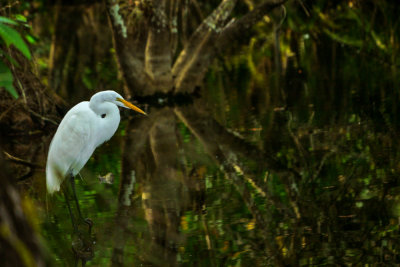 Great White Heron, Big Cypress National Preserve, Tamiami Trail, Florida, 2013
I carefully positioned the beak of this heron at a spot where the softly focused swamp plants seem to join their reflections. The image seems to explode out of that spot. I tried to blend both plant and bird into an atmospheric image symbolic of the great swamp gives Florida’s Everglades region its identity. The environment becomes more abstract because the line where reality meets reflection here is deliberately blurred. I avoid adding the reflection of the heron, which would have made the overall image more descriptive than expressive.
2 comments leave a comment 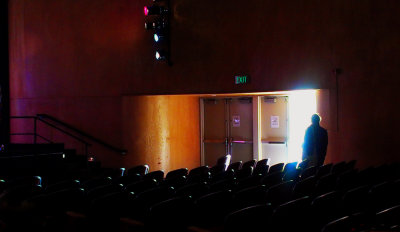 Exit, Palm Springs International Film Festival, Palm Springs, California, 2013.
After the final credits rolled on one of the eight films I screened at this festival, and the crowd had mostly departed, I noticed one person hanging back, torn between going outside into the bright sunlight or returning to his seat for the next showing, which was to follow with the hour. I made this image of him poised at the point of exit, but going no further. The rows of empty seats in the darkened theatre glow faintly, while the lights on the wall overhead convey a colorful theatrical atmosphere at the left edge of the frame. The image is also rich in mood: darkly mysterious, yet with a touch of implied peril looming just ahead. It looks as if that burned out doorway, full of flare, is waiting to swallow him forever if he takes one more step.
I never bring my cameras with me to the movies. However, my cell phone was strapped to my belt, and I was able to make this image with its camera. Although many cell phone cameras are still optically challenged, this one was capable enough to make this kind of image.
0 comments leave a comment 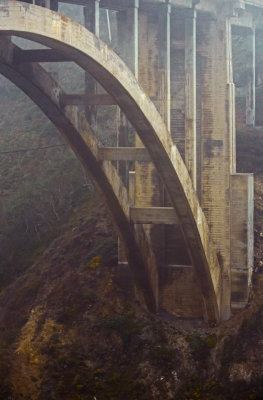 Fogbound bridge at Rocky Creek, California, 2012
Fog along the northern California coast is a frequent visitor. It comes and goes, and in this case, it casts a light veil over the creek, just enough to allow me to see the entire bridge and the valley it spans. The mood of this image is eternal – it seems to carry us back into the past. The art deco design of this huge concrete, open-spandrel arch intensifies the theme. Built in 1932, and located south of Monterey Bay in the Big Sur area, it wears its years well. The gentle colors and soft light add atmospheric content.
0 comments leave a comment 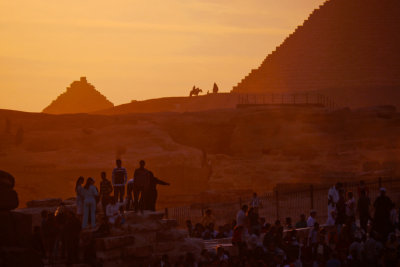 Celebrating history at the Pyramids, Cairo, Egypt, 2011
The fall of 2011 was a tumultuous period in modern Egyptian history. The country had just put aside a dictator to achieve freedom for the first time in centuries, only to confront new limitations posed by the commanders of its own army, as well trying to successfully navigate the messy democratic process of electing an actual legislature for the first time. During the day we spent in Cairo, we not only toured the Egyptian Museum on Tenihir Square (they barred all photography there), but visited the Sphinx and Pyramids as well. Our visit coincided with a national holiday, and thousands of locals were celebrating their own political accomplishments by visiting the tombs of Pharaohs dead for more than 3,000 years as well as the mystical Sphinx, which was typically once again under repair. (It seems to always need some fixing – Cleopatra took Julius Caesar to see the Sphinx more than 2,000 years ago, proudly showing him the most “recent” renovation that had been finished more than 1,000 years earlier.) As the sun went down that afternoon, thousands of boisterous Egyptians were still clamoring over the reconstruction site, with more arriving every minute. I made this image as a salute to their spirit, as well as in appreciation of what they must have endured as a people over the centuries. The golden shadows around them are laden with atmosphere, and the mood seems rich in promise.
6 comments leave a comment 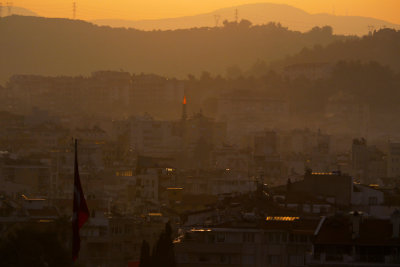 Layers of dawn, Kusadasi, Turkey, 2011
From high on the deck of a docked cruise ship, I made this image of the downtown area of Kusadasi only moments after sunrise. I layer the image with six different planes, starting with the Turkish flag in the left foreground, then moving back through a neighborhood of low buildings sparkling with illuminated skylights. At the mid point of the image, a minaret appears as a flaming red torch – no doubt it was intentionally designed to call attention to itself in this way. Beyond the minaret, a range of buildings crown a low hill, backed by a wall of mist and then another hill, with an even higher hill looming behind it. These layers express the atmosphere of this prosperous commercial town catering to tourists and upscale cruise passengers. Kusadasi is bathed in gold – and in more ways than one.
2 comments leave a comment 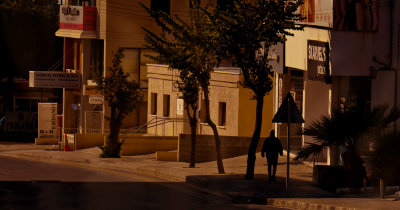 Morning, Limassol, Cyprus, 2011
I made this atmospheric image through the front window of a tourist bus moving slowly through downtown Limassol, Cyprus’s port city. I liked the way the sun defines the planes of the modest buildings, and most of all how the warm light illuminates the sleepy pace of the place – the mood seems calm, almost silent. Only one person appears in the frame, an abstracted silhouetted figure caught suspended in time between a tree and a traffic sign.
0 comments leave a comment 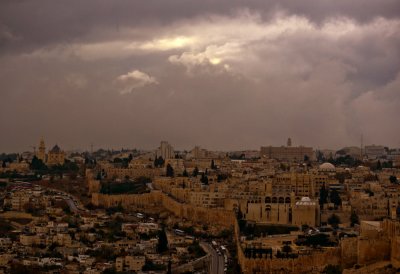 Evening, Jerusalem, Israel, 2011
Most “overlook” pictures are scenic descriptions that simply visually map a location, rather than define it through its atmosphere and mood. I was oddly fortunate to visit this historic city on a windswept, rainy day. Overcast skies are somber, reflecting the strife that has defined this place over the centuries. However as evening fell, the sun struggled to make a brief appearance, softly illuminating the mass of pinkish gray clouds hovering over Jerusalem’s limestone buildings. I happened to be high on the Mount of Olives at this moment, and made this atmospheric image of the Old City, still divided by walls that have existed for more than 2,000 years.
0 comments leave a comment