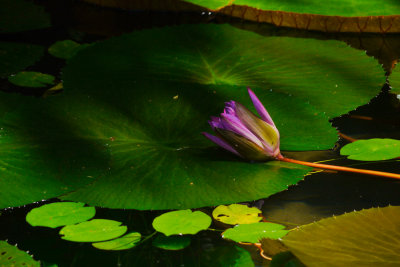 Fallen blossom, Botanical Garden, Belem, Brazil, 2010
The large pond in Belem’s Botanical Garden contains lily pads that are found in the nearby Amazon River. I zoomed in on a fallen blossom, poignantly adrift upon a lily pad. It is a miniature landscape in itself, telling the story of nature’s life cycle. It offers the natural world in microcosm, a style of photography that was introduced to me by my friend and fellow pbase photographer Tim May, who often explores such imagery. ( http://www.pbase.com/mityam )
5 comments leave a comment 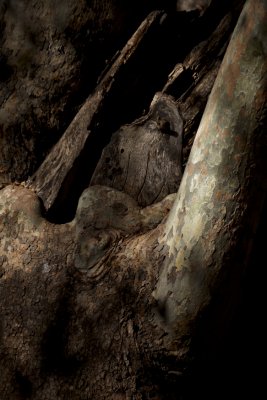 Array of barks, Red Rock Crossing State Park, Sedona, Arizona, 2009
Tight framing and dappled light create a display of various textures and colors belonging to a single tree standing close by the waters of Oak Creek. I remove all signs of life – there are no leaves or branches in the image. I include just the origins of this huge tree, and its surfaces, standing in soft light as an echo of nature’s magical palette.
0 comments leave a comment 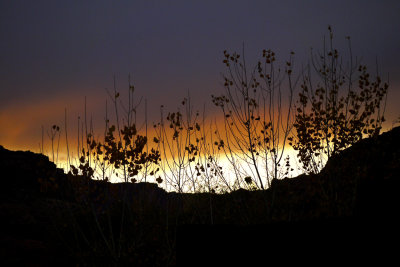 Sunset, Arches National Park, 2009
We had a very brief glimpse of the setting sun as we left Arches National Park. It came at us from the horizon, squeezed between the ground and a heavy blanket of clouds. I made this abstract landscape by silhouetting some delicate plants against the white-hot sliver of sun. Bands of yellow, orange, and purple fill the balance of the space, offering a sight seldom seen.
0 comments leave a comment

Tapestry at Annie’s Creek, Crater Lake National Park, Oregon, 2008
This abstract approach to landscape photography came about because of a problem. Annie’s Creek flows along a deep canyon, a canyon without sunlight at this moment. An overall view would be flat and descriptive. I was forced to abstract, limiting my view to the textures and colors of the pine trees growing along the oxidized canyon wall. I built this abstraction around a single pine tree juxtaposed against the deepest of the colors on the canyon wall. The wall seems to be burning, and the smaller trees seem to take flight from the flames. I cropped the image as a square to hem the trees in from all directions, and making escape seem more difficult.
2 comments leave a comment 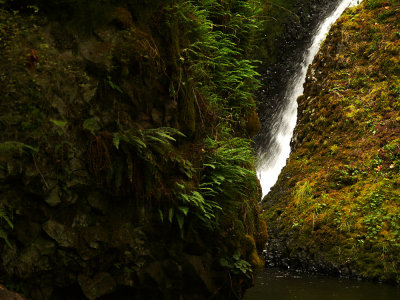 Bridal Veil Falls, Columbia River Gorge, Oregon, 2008
My first glimpse of Bridal Veil Falls, reached only after a hike deep into the
forest, was as a curving sliver of water slicing into a jumble of rocks covered with lush greenery. I made this image, and then went on to spend a half hour shooting the falls from the front. Only later, when I looked at this image in full size on my computer screen, did I realize that this first instinctive shot was by far my most expressive version of these falls. It is the only image I made of the falls that was abstract enough to stimulate the imagination. The sliver of falling water comes from nowhere and goes nowhere. It is an interruption of noisy energy, shattering the silence of an ancient forest of great boulders covered in ferns. The ferns seem to salute the intruding spray. By shooting the falls from the side, I greatly reduce its volume and presence. I moved the camera so that only the minimum amount of water shows beyond the curving rock, increasing tension as I do so. By showing less of Bridal Veil Falls, I wind up saying more – the most significant benefit of the abstracting process.
0 comments leave a comment

Scorched tree, Lassen Volcanic National Park, California, 2008
There were thousands of scorched trees in this park, the result of fires that periodically ravage the dry forests of Northern California. I chose only one, an act of abstraction in itself. I further abstract the dead tree by backlighting it, and placing the burned out orb of the sun directly behind its trunk. Its empty branches resemble arms symbolically reaching into the deep blue sky for warmth, and for life itself.
2 comments leave a comment 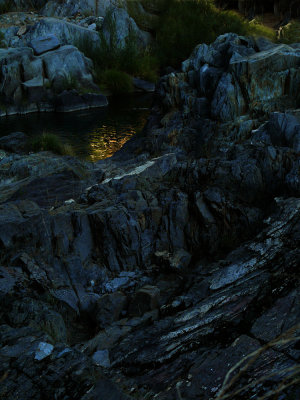 Feather River Canyon, California, 2008
The canyon was in deep shadow, natures own way of abstracting its treasures. I build my image around the detail and subtle coloration within those shadows, and juxtapose them with the Feather River itself, tinged in gold and the offering most vivid colors in the image.
2 comments leave a comment 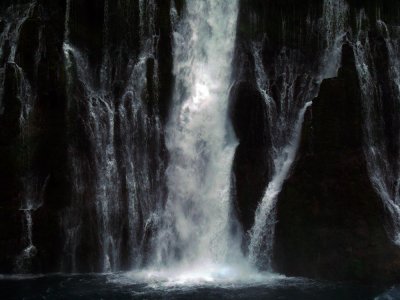 Burney Falls, McArthur-Burney Falls Memorial State Park, California, 2008
Theodore Roosevelt called this waterfall the “Eighth Wonder of the World.” It is indeed spectacular, providing an almost constant flow of 100 million gallons of water a day. The water comes from underground springs above and at the falls. The waterfall is so vast that an overview diminishes its energy. Instead of showing the entire waterfall here, I abstract it, and show only half of just one of its many cascades. This is a color image, giving just enough of a bluish green hue to the water to bring it to life. By spot metering on the white water, the surrounding rocks get darker, and take on the form of giant hooded figures. Water gushes between them as well. You can almost hear and feel the rush of water as it strikes the basin at the foot of the cascade.
0 comments leave a comment 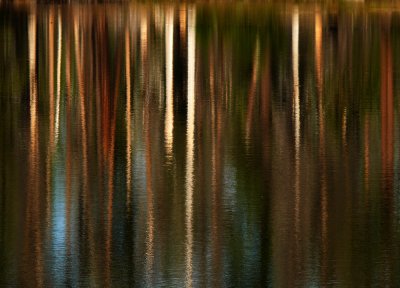 Reflection, Manzanita Lake, Lassen Volcanic National Park, California, 2008
Instead of making a descriptive vista image of a lake surrounded by towering pine trees, I shoot only the reflection of those trees in the water. This is an act of abstraction, changing the landscape so that we see much less of it, but what we do see is more likely to stimulate imagination, emotion, and thought. The bands of shimmering color suggest movement and vitality, two forces of nature itself.
2 comments leave a comment 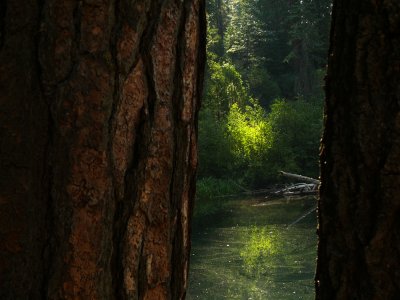 McCloud River, California, 2008
I use two pine trees to abstract and divide my image into three panels of gradually diminishing size. Instead of offering a view of a river landscape, I place my viewers behind the trees, asking them to peer between them to glimpse the sun illuminating a bush on the other side of the river and its reflection in the water. The left panel is filled with the texture of bark, the middle panel offers the illuminated foliage and reflection, while the right panel is an abstracted backlit tree. A pile of fallen trees adds a sense of scale to the scene.
4 comments leave a comment 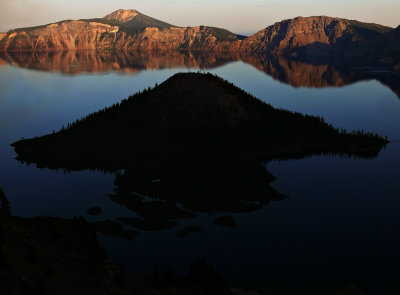 Wizard Island, Crater Lake National Park, Oregon, 2008
The deeply shadowed Wizard Island becomes the abstracting force here – it hovers darkly upon the blue water. In stark contrast, the mountains in the distance and their reflections are bathed in last light. By shifting my vertical vantage point, I was able to leave a narrow ribbon of blue water between the tip of the island and the top of the upside down reflected mountain, giving the image its tension. The island is a volcanic cinder cone, soaring nearly 7,000 feet out of the depths of the lake. It was created 8,000 years ago when Mount Mazama erupted to form the caldera which now contains Crater Lake. Wizard Island becomes a mysterious arrow, rising out of the one of the world’s deepest lakes to salute the lingering effect of the setting sun.
0 comments leave a comment 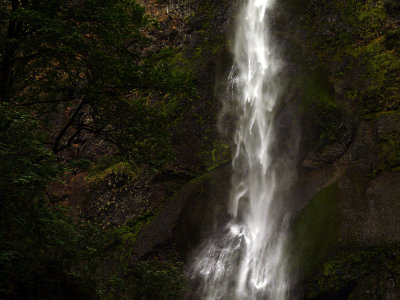 Multnomah Falls, Columbia River Gorge, Oregon, 2008
Multnomah Falls is the highest year-round waterfall in the United States, tumbling some 620 feet in two stages. I only show a small part of it in this image, honing it down to the great gouts of water that seem to be in the act of diving off the cliff. I also abstract its context, the heavy bank of foliage that embraces the falls. By darkening the foliage, I imply the presence of the trees that frame the falls, but do not show them. The less I show of the vast ribbon of water, the greater the power and beauty of its fall. Such is the power of abstraction as a challenge to the human imagination.
0 comments leave a comment