At Rise & Shine Sport Horses we raise horses with unsurpassed temperaments. Horses that are friendly, loving and a strong desire for human interaction. We breed horses who are athletic enough for multiple disciplines and family trees rich with success. These qualities combined create truly wonderful horses that are an amateurs dream and a professionals choice. We are conveniently located 1 hour east of Toronto. You may contact us by phone (905) 376-9456 or e-mail at riseandshine@eagle.ca 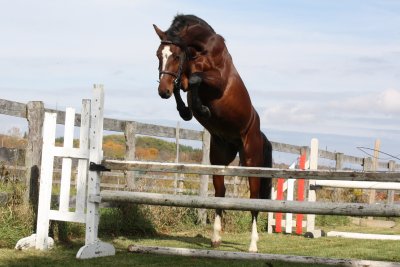 Airmani - GOV Registered July 9, 2010 - currently in California
Olympics, Olympics, World Cup connections in Airmai's pedigree allow him to be destined for the International ring. Wonderful, easy going temperament with this three year old stallion having been raised in close proximity to mares and another stallion. Airmani's sire, Air Jordan Z, has proven himself as one of the best jumpers in the World winning Reserve Champion at the 2007 World Cup Final and Grand Prix wins in Deuville, Brunswick, Valkenswaard and Arezzo.
Airmani's Dam, Bezaubernde, has a pedigree that is equally talented in Dressage and Jumping. Including Zauberklang, and elite stallion, a DLG Champion, and winner of 5 championship titles at Devon produced the Olympic eventing horse Peppermint III, 5 approved sons and 37 studbook mares. Bezaubernde also includes Damian, an International Dressage Competitor in Europe and whose offspring went on to be succesful in the show ring, including Daktari in Grand Prix Dressage. We also find the Elite Stallion, Magnet who produced 8 approved sons in Europe, by the stallion Pregel whom also produced the stallion Donauwind, best known for his World Cup and Olympic Gold Medal winnings.
0 comments leave a comment 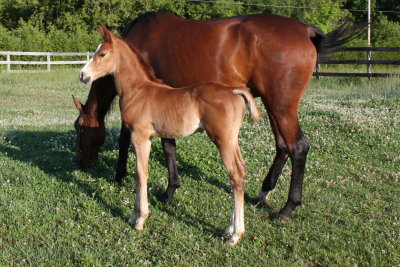 Justa Jiggolo - Please inquire
Justa Jiggolo's sire Harry Potter (a.k.a. Jiggy and registered as Power Van Vrijhern) competed in many Grand Prix with John Pearce and Peter Wylde. Harry Potter's sire is the famous, Jus de Pomme who at that time was the only stallion in history who won double Olympic Gold. At the Olympic games in Atlanta 1996 he won individual and team gold. He was also Champion of Germany and he won the Grand Prix of Hickstead, and made clear rounds in a row of 23 Grand Prix. He also went on to win the Puissance in Veendam in 1993 clearing a 2 meter wall. Jus de Pomme was Belgium Champion under saddle as well as the Champion of his performance test and at age 5 was the highest scoring stallion in the Belgium jumping competition.
On Jigg's dam's side is the famous stallion, Zauberklang, sire of the 2004 Olympic eventing horse, Peppermint III. Also, Damian, an International competitor in Europe from 1979-1984 in CDI and CDIO's.
Jigg's is a very friendly and is easy to handle. His champion pedigree, beautiful conformation and wonderful temperament makes him an ideal stallion prospect and should excel in the show ring. He is registered and branded Belgian Warmblood.
0 comments leave a comment 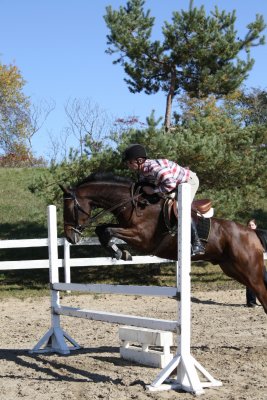 Fabelwelt - Dutch Warmblood / Trakehner April 18, 2004
A spectacular young horse with a very promising future. Personality, athleticism, intelligence, and a picture perfect jump can make this horse a once in a lifetime partner. His strong desire to please will require a sensitive rider. He possesses a ground covering trot and loves to jump, giving him the ability to excel at dressage, jumper or eventing. He has beautiful form while free jumping. His name means Mythical or Legendary and that is how Fabelwelt thinks of himself. As a foal he thought the world was here for him and he wanted to see it all.
Fabelwelt's sire, Forever, is a talented jumper having competed in CSI's in Europe and North America with countless wins and placings to his credit. In 1996 an 1997 he also competed at CSI-W. Forever has several offspring in the sport today including the gelding Dutch Treet, Piete nd Volvo the 2004 Lieutenant Governor Cup class winner at the Royal Winter Fair. Also Forest who competed at the 2008 Beijing Olympics for show jumping.
Forever's sire, Voltaire is an oustanding performer and has produced many amazing stallions. Voltaire is the result of crossing two significant bloodlines, Furioso II and Gotthard. As a Grand Prix jumper, Voltaire has proven himself in International Show jumping. In 1998 he won the Grand Prix of Berlin making him a legend in his own time. He also had the most offspring at the 1996 Atlanta Olympics.
Forever's dam goes back to the stallion Abgar XX, a French Thoroughbred stallion that produced a large number of show jumpers.
Fabelwelt's dam is the Trakehner mare Borealis by the Polish Trakehner Damian. Damian was an International competitor in Europe from 1979 - 1984 in CDI and CDIO's. In 1988, he was a member of the Ontario Young Riders Silver medal team. Damian's son Daktari is showing Grand Pix dressage in the United States.
Borealis's dam was by the Elite stallion Magnet who consistently passed on a quiet temperament, good bone and ground covering movement, producing 8 approved sons in Europe. Magnet's sire was the stallion Pregel whom also produced the stallion Donauwind, best known for his World Cup and Olympic Gold Medal winnings.
Heidi is a 1/2 brother to Fabelwelt by Borealis.
0 comments leave a comment 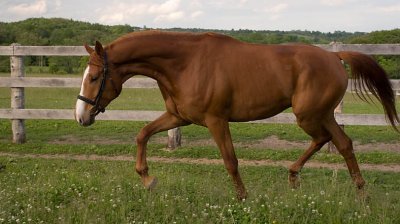 Dreamcatcher - In Loving Memory
An absolute sweetheart. Friendly, loving personality coupled with a natural uphill canter and ground covering trot. This wonderful horse is destined for the dressage or hunter ring. Recently at a Trakehner Inspection Dreamcatcher received the highest score of the day and received the highest movement scores of the day, including an 8 for walk, 8 for trot and 7 for canter. The judges comments include "Elegant, attractive gelding. Well mannnered with good temperament. Good cadence, suspension and ground cover at the trot. Good marching walk with good ground cover."
Dreamcatcher's sire, Bezauber has generations of the finest bloodlines including 3 Elite stallions in his first 3 generations. His pleasant personality and excellent work ethics make him a wonderful horse. His pedigree is equally talented in jumping and dressage.
Bezauber' sire is the world famous Zauberklang, an elite stallion, a DLG Champion, reserve champion of his performance test and winner of 5 championship titles at Devon and outstanding breeding stallion, producing the 2004 Olympic eventing horse Peppermint III, 5 approved sons and 37 studbook mares.
Zauberklang's sire, Prince Conde was reserve champion at his approval and DLG Champion The German Stallion book describes him as "The highest measure of nobility and beauty, complete harmony in everything wonderful in his manner and the way he presents himself."
On Bezauber's dam side is Butow, also an elite stallion having produced numerous dressage and breeding horses with 4 approved sons. He placed in the top 5 during his stallion inspection. "He is known for passing on his outgoing and workmanlike attitude, his natural engagement and impulsion, his athletic ability and excellent gaits."
Dreamcatcher's dam, Doubletake III, is registered with German Oldenburg and C.S.H. She produces tall, beautiful foals with wonderful movement and willing personalities. Herzig is a half brother to Dreamcatcher by Doubletake III.
0 comments leave a comment 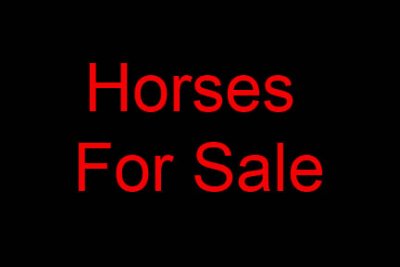 Rise & Shine Sport Horses is a labour of love. We raise 1 - 2 foals per year and every horse is handled daily and consistently. Their ground manners are impeccable with a sincere and total trust in people. You can contact us at (905) 376-9456 or by e-mail at riseandshine@eagle.ca We are conveniently located 1 hour east of Toronto, Ontario. Rise & Shine Sport Horses R.R. #6 Cobourg, ON K0K 1C0
0 comments leave a comment