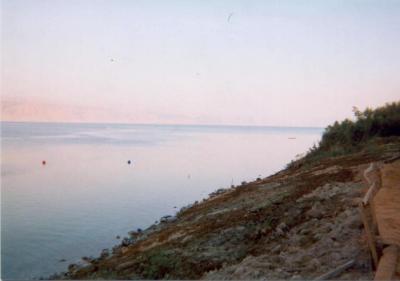 Dead Sea
The pressure changed as we made our way past the Gypsies, through Jericho to the Dead Sea. At 412 meters below sea level the Dead Sea is the lowest point on earth. This lake gets its name because with eight times the salt concentration of the ocean nothing but certain types of bacteria live in this body of water.

The Dead Sea appeared to us a few miles from Jericho. The lake stretches over sixty-five kilometers sharing coasts with Israel and Jordan. Haze caused the sea to blend in with the surrounding hills and sky; I couldn’t tell where the sea began or how large it was.

We drove along the seashore until we stopped at Siesta Beach. I didn’t care that we were overcharged for admission this late in the day. I brought my swimsuit with me and I wasn’t going to let a heavy toll deter me from a swim in the Dead Sea.
0 comments leave a comment 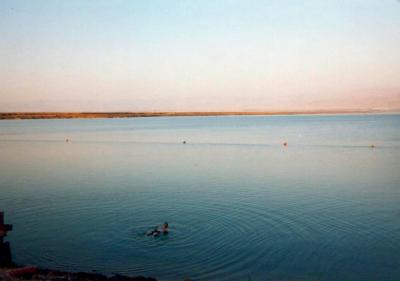 Dead Sea Swimming
I walked along the rocky beach to the water. The sulfuric tasting water felt like the consistency of oil on my hands and like a burn on an exposed cut. My legs floated above the water. It was very relaxing to float in the lake and take in the surroundings that evening.

At sunset, a beach attendant called to me to get out of the water. He encouraged me to enjoy the mud from the bottom of the sea before I left the shore. I spread mud on my face and all over my body before I was reprimanded for stepping in the plastic bucket of mud.

I showered, toweled off and approached the counter at the outdoor bar where Adam complained about his five-dollar bottle of water. “This is the desert,” he was told. A local walked up to the bar and purchased a similar bottle of water for three shekels or less than one dollar. We visited with the locals while we drank our expensive water. The sunset was our cue to return to our car and drive through the desert to our hotel in Jerusalem.
0 comments leave a comment 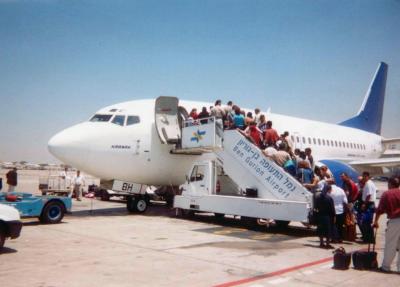 Flight Prep - July 20th
Already late for our agreed upon meeting time I knocked on Adam’s door. I was feeling better and ready to fly off to the land of the Bangles, camel, sand and pyramids. I gathered up the souvenirs I displayed throughout my hotel room.

The flight prep in Israel was incredible. I’ve flown hundreds of segments including one flight from Hong Kong to Los Angeles Sept. 14th 2001; I have never experienced as thorough a search process.

At the airport gates we were stopped for questioning then ushered through a checkpoint at the airport entrance. Of course they had no record of our reservation at the Sinai Air check in counter and wouldn’t be able to sell us a ticket…that would be too easy. We purchased a ticket from El Al Airlines to board a Sinai Air flight chartered on Egypt Air. The fun began when we made our way back to the line at the Sinai Air check-in counter.
0 comments leave a comment 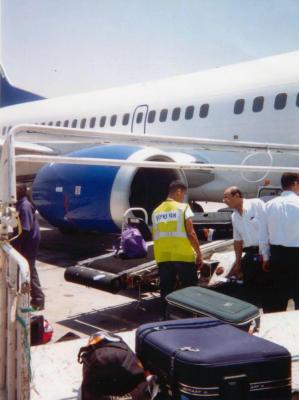 Flight Prep
A security attendant looked at Adam’s US citizen born in Iraq passport and pulled us out of line. The attendant questioned us together and then questioned us separately. Luckily we went with the truth that I was in town to pick up Adam, my indentured servant. Actually, we told them that we had never seen each other, just happened to be the only Americans on the Israel to Cairo flight and by coincidence work for the same company and have matching hotel receipts. Either of those stories may have expedited the search process. They found out from Adam that yes, it is possible that America declared war on Iraq twice in the last twelve years yet allow U.S. citizens born in Iraq to remain U.S. citizens.

The questions I was asked were easy to answer. “Yes, we work together, No, I don’t know anyone in Israel beyond my co-workers. No, I didn’t go into the West Bank and I’m offended that you insult my intelligence and question my sanity by asking me such a question!”

Adam’s interrogation lasted another fifteen minutes. I let the whirlwind of the past week set in and began reading about Egypt until it was time to check our bags.

After the third time through the x-ray machine, my bags were emptied for two levels of security officers to inspect. Tourists and their belongings endured this process along with me. Security even dug a piece of lint out of my computer case, placed it under the metal detector wand then though a machine that checks for explosives. I cringed as they unpacked breakable souvenirs protected strategically between books and clothes Telling made up stories to the security girls passed the time while each of my belongings was removed from my bag. When I ran out of stories I began to ask them personal questions as I thought it only proper to get to know these girls handling my underwear.

The inspection continued. Ten minutes after Adam left for the gate, a Sinai Air employee who announced she would not be checking any more bags to Cairo. Our flight time approached.

One member of the souvenir search squad helped me pack up my belongings. She rushed me to another part of the airport where we deposited my luggage with oversized baggage for my flight. She led me through the airport to my gate. I was dumbfounded to see that if I had not been escorted I would have been subjected to another round of screening.

I joined Adam at the gate with plenty of time to board. It was a bus and not a plane that we boarded. The bus took us to the runway to reclaim our luggage. As a security precaution we would have to identify our belongings in order for them to be placed on the plane.
0 comments leave a comment 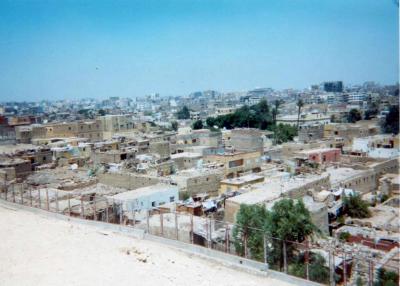 Cairo
The flight to Cairo was bumpy. I was happy to be out of the terminal and on the plane with Adam, a cucumber sandwich and a side of cucumber slices. When we landed to clapping and cheers I was glad I hadn’t understood the pilot’s frequent announcements.

In Cairo, we were fast tracked through customs; Egyptians had confidence or experience in the Israeli search process. In Cairo there is local pricing and tourist pricing, we found out after our cab ride to our hotel that we would be paying tourist pricing.

Cairo is a city of seventeen million people and three million cars where the horn is the standard. A short tap would signify good day or how are you; a longer and more forceful sound would alert surrounding drivers to get out of the way, to watch out or **** off.
0 comments leave a comment 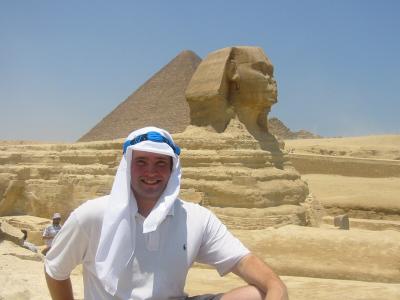 Sphnix
Beyond the sphinx, pyramids, tombs, and the Tutankhamun exhibit at the Egyptian Museum I was looking forward to relaxation. After Israel I was all travel planned out. Sitting outside rotating between the hotel pool and naps beside it would be my plan for the remainder of the trip.
0 comments leave a comment 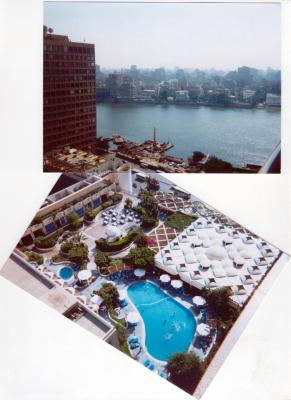 Conrad City View
We booked rooms at the nicest hotel in the city, the Conrad Cairo; a five star hotel overlooking the Nile where presidents, ministers and sheiks stay. The Conrad is the luxury brand of the Hilton. This place rivaled the Le Meridian in Thailand as the nicest hotel I have visited. Two bellmen dressed in official attire introduced themselves, tagged our bags and walked us to the entrance. At the front desk another pair of bellmen were assigned to us. The hotel service was so comprehensive I wouldn’t have been surprised to find bellmen behind the bathroom door waiting to assist.

I settled into my room ready to visit the hotel shopping mall, hotel casino and enjoy my executive privileges. Due to the stays I amassed over the years I was given a plush room with a balcony overlooking the city and the river. I walked to the executive lounge where I eased into a leather chair in front of a plasma television screen. The view from where I sat looked like a commercial. The Conrad insignia appeared on the window; palm trees, gold railing and cushioned seating lined the deck overlooking the Nile River and surrounding city.
0 comments leave a comment 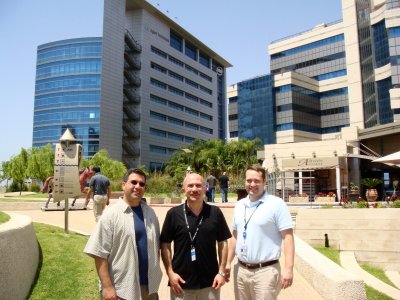 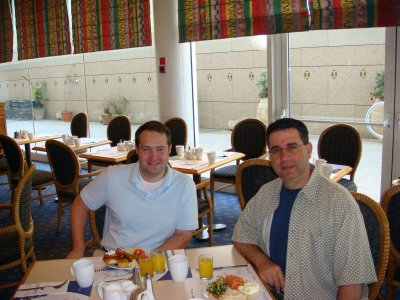