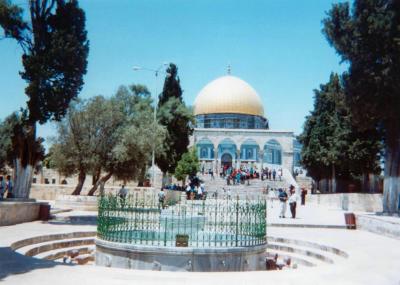 Al Asqa
Once I reached the top of the steps the director declared the next two hours his break to be used to give us a guided tour of the Muslim buildings, fountains and gardens. He took us inside his cramped office quarters, served us water, an orange drink, tea and Turkish coffee. I didn’t understand a word of his broken English, but it was hot and the orange drink he served was cold so I smiled and nodded as if I understood.
0 comments leave a comment 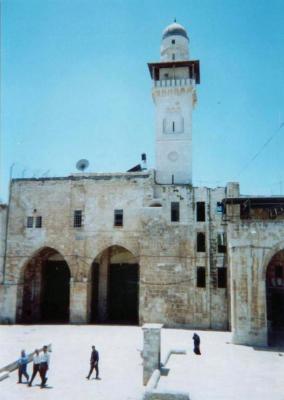 Al Asqa
The Director took us throughout Al-Aqsa. We walked past the places where Muslim prayer is broadcast. One broadcast location sits above the Wailing Wall.
0 comments leave a comment 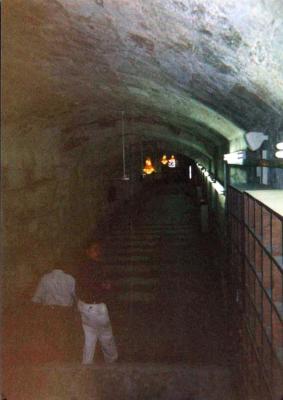 Al Asqa
We also saw the Eastern retaining wall, unused construction materials from the fourteenth century and spent time inside the Dome of the Rock.
0 comments leave a comment 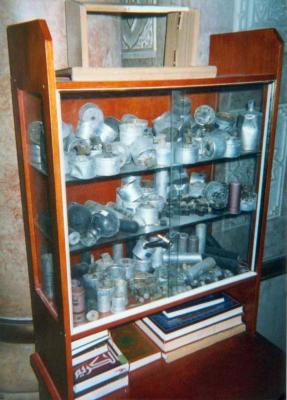 Al Asqa
Our guide pointed out bullet marks inside and outside the Dome. He showed us a display case of gas canisters collected inside worship areas. These were the products of times when Israeli and Muslim tensions overflowed.
0 comments leave a comment 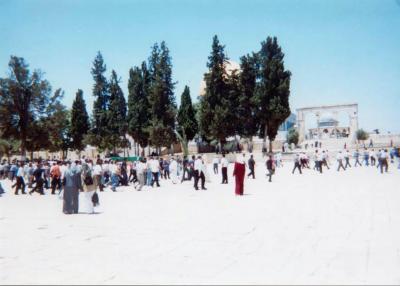 Al Asqa
After our tour we returned to the director’s quarters to thank and tip our guide. Because of the strict Israeli entry requirements, many Muslim pilgrims will never be allowed to approach this historic area. We appreciated the visit and the privilege of the guided tour.
0 comments leave a comment 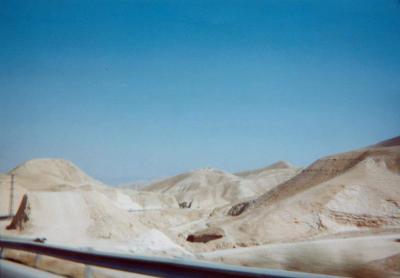 The Judean Desert
Adam was desperate for food. At that point only his disgust with peddlers and frustration with being lost in the souq exceeded his need to eat.

We were on our way to visit the world’s oldest city and lowest elevation. However, we had to locate our car. Walking in circles inside the souq gave Adam an idea. He would locate the city wall and walk around the outside of the wall to where we parked.

The time and exercise it took to reach our car only made Adam hungrier. I was hungry too but what worried me was that I had never seen Adam go this long without a meal. I was afraid that he was going to eat me.

Adam’s poor sense of direction inside a car rivaled mine. We circled the city as a result of each other’s directions without noticing a restaurant. Driving anywhere sounded more appealing than another aimless loop around the city. We decided to follow a sign directing us to Jericho and stop along the way to eat.
0 comments leave a comment 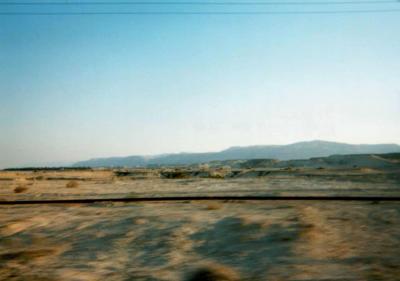 Judean Desert
Nothing but the Judean Desert greeted us east of Jerusalem. I broke into song, "Oh, I'm riding in the desert on a horse with no name. Hmm hm hmm hmm hmmm hmmm hm hmmmmm. That was the only part of the only desert song either of us knew and Adam’s not much of a singer so the sing along was short lived. I sang it again with a twist, “Oh I‘m riding in the desert on a horse named Jawad.” Adam didn’t find that verse funny but I found everything to be funny in a desert below sea level. That verse became a little funnier each time I sang it to myself during the long drive. 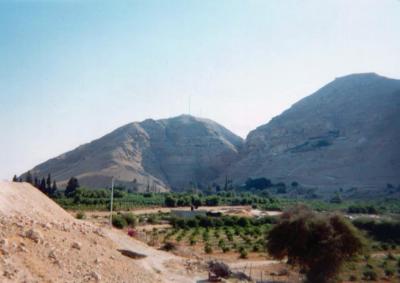 Jerico - Mt. Temptation
Adam stopped at the first sign of food near the Mount of Temptation. Here, Jesus fasted for forty days and forty nights while being tempted.

The restaurant Adam chose didn’t have a name but if I were to name it, “Choose Your Own Chicken” would have been fitting. Chickens rotated in an open-air roaster while other chickens walked outside the restaurant. We sat down to plates of peppercinis, onions, olives, humus, pita bread and sauces. The owner/cook/server poured water out of a 1.5-liter recycled cola bottle he used as a carafe. Adam mixed falafel with the fixings while I enjoyed my chicken. What appealed to me most was the taste of the food. In Israel everything tasted like cucumber. Here, chicken tasted like chicken.
0 comments leave a comment 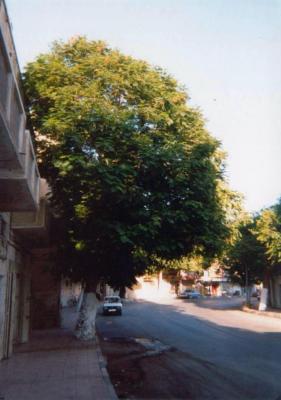 Sycamore, Jerico
What I wanted most from my visit to Jericho was a picture of a Sycamore Tree. The biblical character Zaccheus climbed a Sycamore in Jericho in order to see Jesus. Jesus called for the greedy tax collector to come down from the tree and to be his host. After time with Jesus, Zaccheus offered half of his possessions to the poor and returned four times the amount he took from the people.

I photographed what I thought was a Sycamore tree before we approached other trees with Sycamore potential. I had no idea what a Sycamore looked like. I insisted Adam stop to allow me a picture of a tree and then another and another before focusing on our next destination, the River Jordan.
0 comments leave a comment 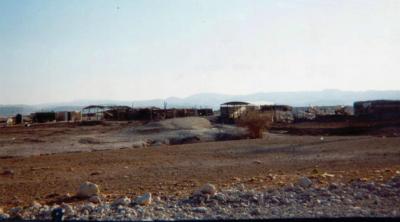 Gypsies
A barricade blocked the road to the river where John the Baptist baptized Jesus. I approached the officer who guarded the barricade to insist that we pass. He yelled at me in Arabic and then said in English, “Gate is closed. Find different way to the river.” I decided not to question the armed Palestinian from behind the gate. We returned to town to find an alternate.

Adam continued to drive even though he was nervous once the pavement ended; I assured him the river could not be much further. We drove for miles on a dirt road with the desert surrounding us when I saw the water. Turned out it wasn't water; it was a settlement of around ten tents with metal roofs. Real life Gypsies! This time it was my turn to fret. Here we were miles from town in the middle of the desert with no water or clue where we were. What spooked me most was that we were trespassing on Gypsy land. “Adam, maybe you were right we should go back.”
0 comments leave a comment 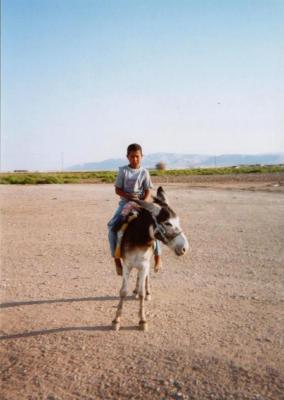 Desert Child
On the road back to Jericho we saw a child on a donkey in the middle of the desert.
0 comments leave a comment 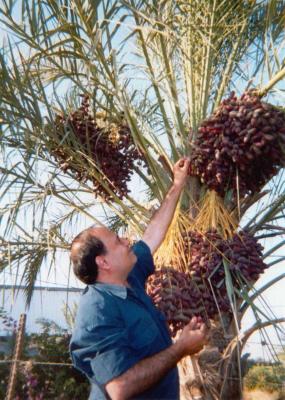 Date Tree
Near Jericho, I noticed vegetation that I couldn't explain. It appeared to be a cross between a palm tree and a banana tree. This area looked much different than the desert and the other cities in the occupied territories. I figured that the ability to irrigate areas around Jericho might explain why for so many centuries civilizations called this area home. Adam pulled over to the side of the road and said, “I have to stop because I can’t do this every day.” I waited as Adam harvested a Date tree.
0 comments leave a comment