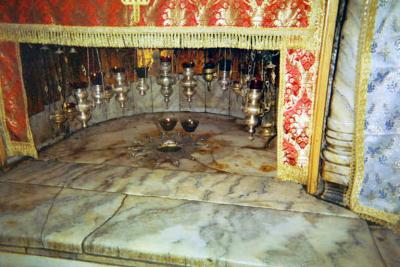 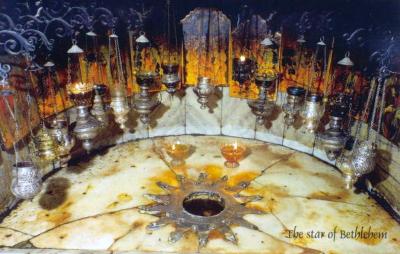 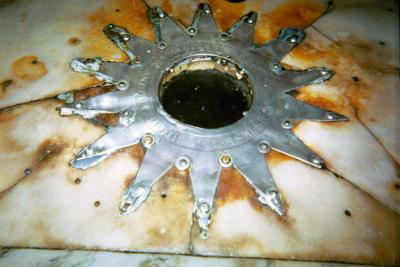 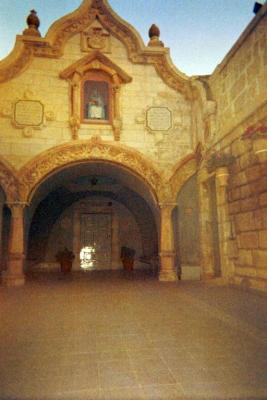 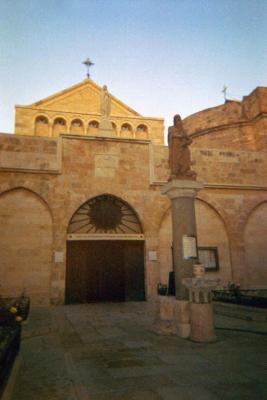 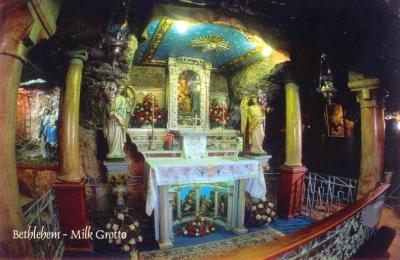 Milk Grotto
Adel offered to drive us to other attractions in Bethlehem. Adam tossed over the keys and away we went. We stopped at the Milk grotto and then the Shepard’s field. The Milk Grotto is a church built above the cave where the Holy Family hid before fleeing to Egypt to avoid Herod’s decree. A drop of milk that fell while Mary was nursing Jesus is said to have colored rocks in this area giving chalk from the rocks fertility powers.

The adjoining town of Beit Sahour is the setting for the biblical book of Ruth and where an angel announced the birth of Christ to sheppard’s who watched their flock by night.
0 comments leave a comment 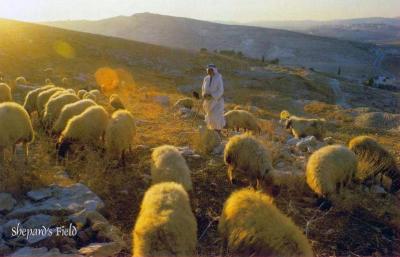 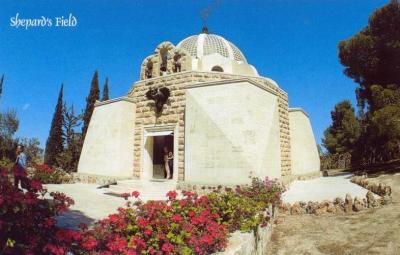 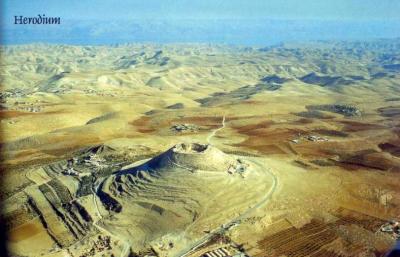 Herodium
Adel stopped the car where we could see Herod’s man made Mountain, Israeli settlements and the construction of the wall dividing Israel and the West Bank. We discussed the impact of the Israeli settlements and presence of the wall. Only a handful of tourists visit Bethlehem each day compared to five thousand a day three years before. We saw one family of tourists the whole time we spent in Bethlehem. The Palestinian economy is based on tourism, carving of the Olive Tree and mother of pearl seashells. Building a wall around Palestine together with continued conflict may sink this already unstable economy.
0 comments leave a comment 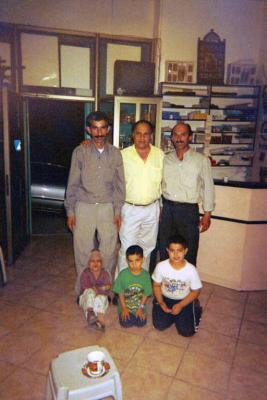 Palestine: Anand's Family
Adel asked that we visit his cousin’s shop. I was apprehensive of a stop in the West Bank after sunset but we went with it. Unlike Coos Bay, Oregon where everyone is actually related, this cousin was not a relative but a close friend.

The storeowner, Adnan, showed us a picture of what looked like him standing in the street above a metal slate. He smiled and laughed as he took us outside to show us where this picture of his car was taken a few months before. I wondered if I could handle a tank crushing my car with such a carefree attitude. “What are you going to do,” I asked.

With a genuine smile he responded, "what can I do, I am alive" and then we drank. Adnan served Adam Arabic Coffee. He recommended something special for me: wine, priests reserve for Christmas Eve.

Adnan fascinated me with insightful political views he expressed through personal experiences. He explained that he does not hate Israel or Israelis by telling the story of an Israeli man. The man snuck Adnan’s young son into Israel to receive medical attention for a severe burn. He said that should tourism return once the occupation ends he would reestablish business ties with this man and his other Israeli contacts. I asked Adnan’s opinion on the political hot buttons of the Israeli occupation and expansion into Palestinian territory. He said, “when I die I can't take the land with me, land isn't going to feed my children. Take the land, just let us live and give us a break.”

Adnan told stories of soldiers without warning or cause searching his home. I tried to imagine soldiers forcing their way into my home, shuffling through my belongings and leaving it in shambles. Adnan explained that his youngest of five children was a product of curfews. He joked that if Israel really wanted to rid the West Bank of Palestinians they should remove tanks from the streets and eliminate curfews that keep couples inside with nothing to do.

Adel and Adnan were articulate, courteous and well dressed in colored shirts and slacks. When tourism was booming Adnan and his brothers sunk most of their savings to open this store. I wondered what would happen to Adnan and others like him when times became more desperate, when their savings were gone.

Adnan said, “I would like to offer you another drink and then see if there would be something you might like to take with you.” Before we left the shop another bag full of souvenirs found its way to the trunk of our car.

Adel steered us through town honking as he drove to what looked like a run down diner. Inside the one room building Palestinians enjoyed cake and conversation. Conversation slowed once we entered. Adam blended in but my presence was carefully tracked. I followed Adel to the counter where I made my dessert selection then sat down to face the suspicious stares. The stares continued until Adnan arrived, sat down next to me and we started talking.

We visited for quite some time. What struck me most was the value of that time. Palestinians in Bethlehem were not in a hurry. No one gulped down their dessert or took their order to go. Conversation and dessert was Palestinian entertainment and what they had to offer to their guests; they shared lots of both with us.

Adel drove us to the edge of town where he stopped the car to explain that he could go no further without risking a run in with Israeli soldiers. Adel told us to go ahead without him to the West Bank entrance. He assured us a friend would be coming soon to drive him back to his car. We thanked Adel and paid him generously for his time.

It made sense to me why Adam gravitated towards Palestinians. Until our visit to Bethlehem, my knowledge of Palestinian culture consisted of fifteen-second media broadcasts. These video clips portray Palestinians as tyrants whose only cause is to bully peaceful Israelis. I expected to confirm this bias in Bethlehem, instead I found truly peaceful people. Throughout my trip I asked the Palestinians I encountered about their peaceful nature. Responses were consistent with Adnan’s answer to that question, “We don’t keep so positive, we are furious but we purge that anger five times a day during prayer.”

We left Bethlehem that night to return to our hotel. Less than a ten-minute drive but a world away, in Jerusalem Israelis celebrated a film festival, dined in elegance and drove away in luxury cars, interacting as if there wasn't a care in the world. What an interesting place.
0 comments leave a comment 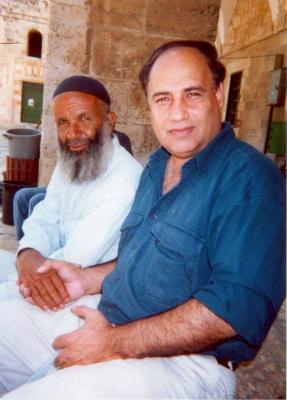 Day two at the Al-Aqsa Mosque - July 19th
We discovered at the gates to the Al-Aqsa Mosque that there is no such, “everyone welcome day.” The attendant who misinformed us the day before was curiously off duty. Again, I attempted and failed to walk through the entrance. I flashed a Pocket sized Koran. Still, no luck passing security.

This time Adam didn’t stop to reason with security, he continued through the entrance up the steps to the Dome of the Rock. I thought he was going site seeing without me. I was content to people watch, although the more I looked at the Dome of the Rock, my interest grew in seeing the inside. Hundreds of people walked in and out of the entrance while I stared at the souq shops from the top of the Al-Aqsa steps.

Fifteen minutes after Adam left me behind, guards, who had been watching me like a hawk, told me that I was free to enter. What, now you are going to let me in? How am I going to find Adam? I thought. Before I questioned the decision to let me in, I spotted Adam with a team of security on the steps leading to the Dome of the Rock.
0 comments leave a comment 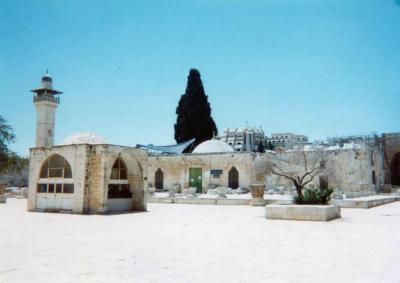 Al Asqa
Adam nudged me as I climbed the steps; as forcefully as he could while speaking discretely under his breath he made it clear that my name was NILE. Adam hadn’t been site seeing. He had negotiated my entrance by escalating the non-Arabic speaking Muslim-American story through three levels of management. When Adam was about to concede, the Director of Muslim Security asked Adam one more time, “his name is Nil?”

Instead of correcting the director as he had corrected Arabic speakers throughout our trip that the correct pronunciation of my name was “NelZ,” Adam responded, “Yes, Nil, like the river.” The security guards, their manager, their manager’s manager and the Director who assembled to question the Iraqi at the top of the steps looked at each other and agreed, Nil is a Muslim name. They told Adam that his friend was welcome inside Al-Aqsa.
0 comments leave a comment