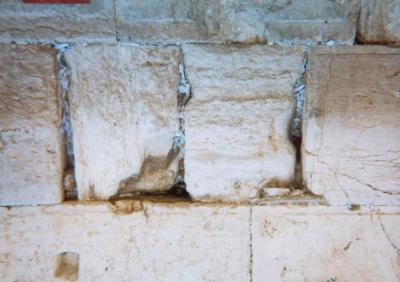 Written Prayers
Visitors tuck written prayers in crevasses of the Wailing Wall. Urgent prayers and prayers from believers not in the vicinity can be faxed to a company that deposits the messages in the wall.
0 comments leave a comment 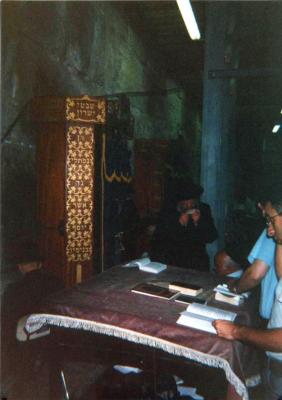 Synagogue
We noticed men disappear in a synagogue attached to the Wailing Wall. We investigated the entrance where we were welcomed inside and encouraged to be blessed by the Rabbi. The Rabbi visited with us for a few moments, decided on our blessings and sent us on our way. Adam was blessed for good business and I was blessed for a wife.

We thanked the Rabbi, tipped him then explored the rest of the synagogue. Tapestries hung in front of the exposed Wailing Wall. The synagogue resembled the peaceful scene outside where people read scriptures and prayed aloud while others rested in chairs facing the Wailing Wall.
0 comments leave a comment 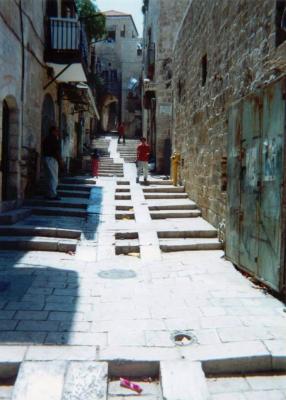 Walk to The Church of the Holy Sepulchre
The next scene seemed more fitting in a movie where soft music plays and motion slows. We walked paces behind our child guide as we passed children playing, others peddling necklaces, post cards, and holy water as sunlight illuminated stonewalls and cobblestone streets. Captivated by these exceptional surroundings, we made our way to the site of Jesus crucifixion, burial and resurrection.

We followed the child through the halls of Old Jerusalem along a portion of the Via Dolorosa (Path of Sorrow). The Via Dolorosa marks Jesus path the day of his crucifixion. A chapel at each station commemorates one event from his condemnation to his burial; together the chapels make up the Fourteen Stations of the Cross.

The child led us through a maze of streets ending in a narrow corridor. Periodic chills I felt as I walked intensified once the corridor opened to the patio of the Church of the Holy Sepulchre. I looked around in amazement as I thought about what had taken place where we were standing, two thousand years before.

Near the entrance, Adam accepted a guided tour of the Church. We learned the Church of the Holy Sepulchre houses the last five Stations of the Cross. Our guide, Ali showed us where Jesus fell while he carried the cross, where he was stripped of his clothes, and nailed to the cross. Ali explained Jesus was anointed before he was buried on the slab near where we stood. Ali led us up the church stairs to the Calvary or Goletha, the site of the crucifixion. I touched the stone that held the crucifixion cross through an opening in the glass display.

Overwhelmed with the tour at that point, we gave ourselves a Jesus break. Ali took us to a priest who blessed and sprinkled holy water on our souvenirs. He showed us a crusader sword display and pointed out cross carvings throughout the church walls where crusaders marked their arrival.

We walked through the church to see the Greek Orthodox, Armenian Orthodox, Ethiopian, and Franciscan sections. A candle lighting procession led us to the ground floor of the church.

The Holy Sepulchre stood at the center of the church. An entrance surrounded by huge candles led into a tiny chapel monitored by a priest. Jesus tomb, the fourteenth and final station, lies beyond an opening at the end of that chapel. A raised marble slab covers the rock where Jesus body was laid. Ali removed a panel from the wall so we could see and touch the rock formation.

Spiritual overload set in by the time we left the Church. Still, there were other churches to see. Ali took us to an Ethiopian Church and then he and Adam waited while I went into a Lutheran Church. I appreciated the visit; I remain a member of the Emmanual Lutheran Church in Cheney I grew up attending even though my Mom and siblings defected to a Presbyterian ministry in downtown Spokane. 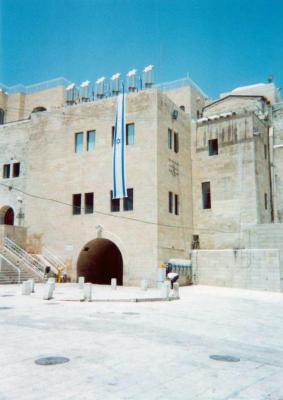 Israeli buildings
Our tour guide offered to take us out of the hot sun for some cool drinks in his family’s air-conditioned store, Fountain Bazaar Dajani: Fine Exclusive Jewelry. I examined the woodcarvings, ceramics and clothing. Workmanship, quality and premium pricing differentiated this spacious store from the stands we visited in the crowded souq. Adam discussed politics and the interwoven network of the jewelry store with the owner near glass display cases. I shopped. They served coffee, tea and closed the store periodically for private viewings each time Ali returned with a group of tourists. I shopped more.

The more time we spent in the store the more intrigued I became with the gold and silver jewelry displays. I learned what I purchased earlier was not Roman glass but common beads. Roman glass from the time of the crusaders was available in Israel but not at the prices I paid. I found out the condition of my souvenirs was a result of aged inventory not ‘holy dust’ as I was told.

I negotiated pricing for the items that appealed to me. $$$$ later, I walked away with enough jewelry to open my own store. Damn Rich for telling me about Roman Glass. By the time I settled the exorbitant bill it was again time for Adam’s feeding.

The storeowner instructed a cook to take care of us in the shade outside the jewelry store. Children rode their bicycles in the open courtyard while others played backgammon. Ali stopped by our table after steering another group of tourists to his uncle’s store. He told us that the word on the street is that Adam runs with a shrewd negotiator. His uncle told him that I should take part in negotiating the peace process. This compliment wasn’t going to refill my bank account and appeared be a negotiation tactic since it came with an invite to return the next day.

A necklace salesman named Jawad approached our table. He told us his name in Arabic means 'good horse.' I found this to be comical since Adam’s last name is Jawad and he appointed himself driver for our Israeli tour.

The cook took extra care to calculate our bill. We paid for our overpriced meal and determined a break from the walls of the old city was in order. Beyond the Sea of Galilee, the Church of the Nativity in Bethlehem was the main draw for me in Israel. Next stop Bethlehem and with it testing our luck in the West Bank.
0 comments leave a comment 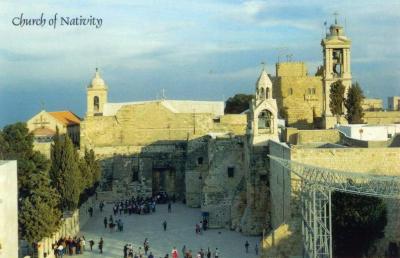 Church of the Nativity (Basilica), Bethlehem
We followed a multitude of streets within the souq to the gate where we parked. I stopped often to ask the way to Bethlehem. “Excuse me, could you tell me how to get to Bethlehem?” While we drove I still couldn’t believe that I was going to Bethlehem. “Adam, pull over I want to ask directions again.” Adam didn't see the beauty in me repeating the word Bethlehem; he followed street signs and refused to support any more of my requests to stop.
0 comments leave a comment 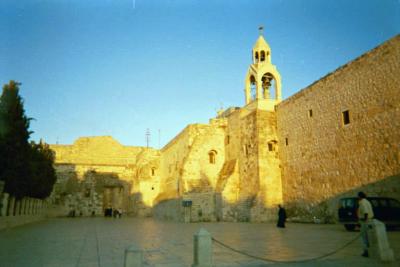 Basilica
I was skeptical of our ability to enter Bethlehem since it was inside the West Bank. The cautious warnings shared with us throughout the day made me question if I wanted to be allowed to enter. The scene outside Bethlehem resembled our failed border-crossing attempt the previous day; soldiers and military vehicles surrounded a barricaded West Bank entrance. Unlike the day before, it appeared that cars like ours with yellow Israeli license plates were allowed entry as well as the Palestinian cars with white and green plates.

An Israeli soldier stopped us, asked passport questions, warned us repeatedly to be careful then allowed us to cross the line into Palestine! Once inside, I feared that we really had crossed the line. Upon entering the West Bank and seeing what we had been warned against, I sided with Nick's description for me and my traveling partner: dumb and dumber.

We squeezed past cement barriers along unpaved roads in a residential neighborhood. Burnt cars and piles of blown up concrete from bombed homes lined the streets. Residents walked along dirt roads. In the distance we caught a glimpse of a boy herding sheep.
0 comments leave a comment 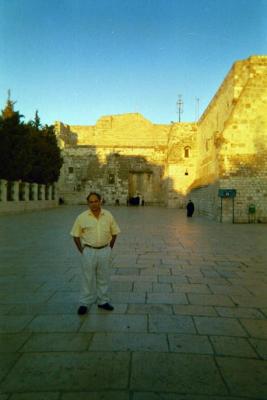 Basilica
Apprehensive of our surroundings and drastically out of place, we proceeded with unspoken security. We were protected, Adam by his Iraqi heritage and me by association with Adam. Each time we asked directions a resident would celebrate the visiting Iraqi and his friend.
0 comments leave a comment 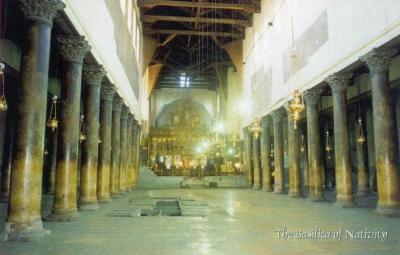 Basilica Entryway
Honking in Palestine supplanted the Israeli driving custom of arm waving. We followed the sound of honking cars to a paved road outside of the residential area. Adam spotted a Palestinian officer nearing a police station. Soon after Adam stopped for directions, he returned to the car saying, "They are going to take us." Before I asked what he meant, sirens blared and lights flashed; one minute lost in a war zone and the next, the featured car in a two-car police parade! I felt like sticking my torso out the window waving elbow, elbow, wrist, wrist.

The officer honked as he drove through a labyrinth of streets. Our destination appeared without windows or doors across the street from a vacant Manger Square. We walked through an empty courtyard at dusk to the weathered Basilica of the Nativity Church. It was fitting that we must kneel to enter the small entryway to this most sacred attraction.
0 comments leave a comment 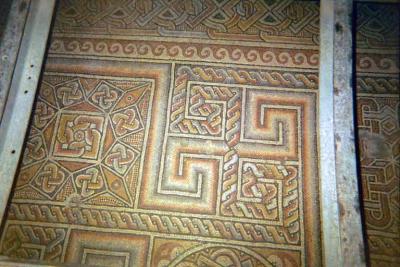 Basilica Floor
One of the few people inside the Basilica, Adel, introduced himself to Adam. After their brief conversation Adel showed me his official tourist guide credentials and explained that he would show us around free of charge since Adam was Iraqi.

Adel began our tour with a history lesson. “Queen Helena built this church along with the Church of the Annunciation in Nazareth and the Church of the Holy Sepulchre in Jerusalem. Built in 329 the Basilica is the oldest continuously used church in the world. The Basilica was not destroyed with other Christian monuments during the 614 Persian invasions. It was spared because Persians recognized a mosaic pattern that displayed Persian Wise Men; they decided the monument must have been built to honor them…”I tuned Adel out once I saw the beautiful mosaic floor through the wooden trap doors that cover it.

Adel gave me time to stare at the floor before he led us to the entryway. He explained the small door acts as a barrier to Israeli military vehicles. This door, The Door of Humility, was constructed so intruders could not enter on horseback.
0 comments leave a comment 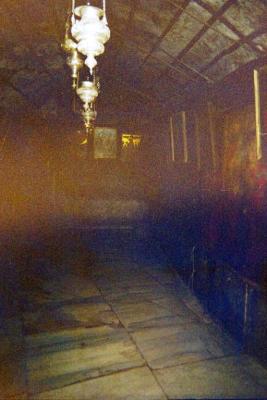 Nativity Cave
Stairs lead to the Grotto of the Nativity, a cave below the church believed to be Jesus birth site. A fourteen pointed Silver Star marks the birthplace. Adel explained that the fourteen points represent the fourteen stations of the Via Dolorosa as well as the fourteen generations from Abraham to David. Hic De Virgine Maria Juses Christus Natus Est (Here of the Virgin Mary Jesus Christ was born) is inscribed on the star. The manger area sits nearby. Adam and Adel visited as I soaked up this experience. Every year millions of people celebrate Christ's birth and I was standing where it all took place.
0 comments leave a comment 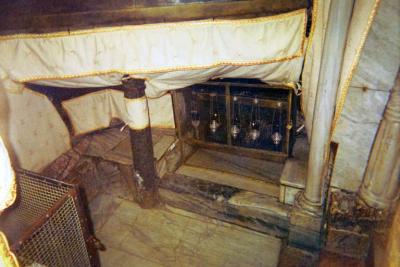 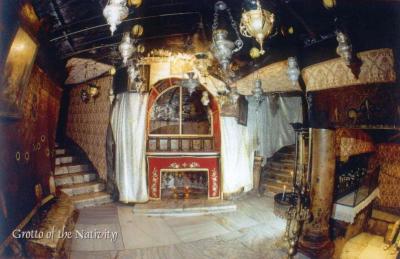