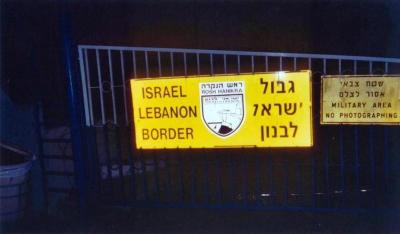 Lebanon Border
Before we knew it we reached the Lebanese border! We enjoyed a beautiful sunset and views of the Mediterranean Sea. A border guard confirmed our suspicion that only military and UN people were allowed to cross the Israeli gate. The guard dismissed us from the border when he noticed my camera flash. It wasn’t until after I developed the film that I noticed the no photographing sign.
0 comments leave a comment 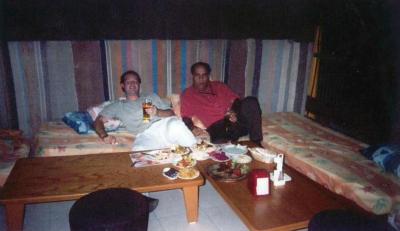 Lebanese Excursion
Adam spoke Arabic with the locals sitting on a hill overlooking the Sea. The Palestinians loved Adam. When they recognized his Iraqi accent their eyes lighted up and they invited us to their home for dinner.

Two members of my team arrived in Haifa to support the program schedule planning. I nicknamed them 'Doom' and 'Gloom' out of their less than enthusiastic response to our Lebanese excursion. We rented separate cars, as I didn't think they would be interested in bus riding adventures or lighting fireworks in the spirit of a belated forth of July celebration. Some people aren't as adventurous or patriotic as others.
0 comments leave a comment 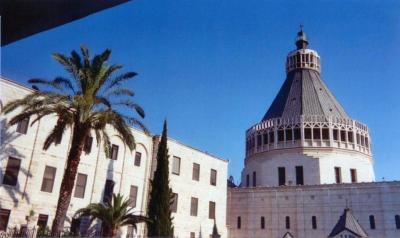 Chuch of the Annunciation, Nazareth - July 14th
Monday’s plan included a visit to Nazareth and the Sea of Galilee. I packed bread in case I was hungry for fish and a swimming suit in case walking on water didn't work for me. We left work at 5PM, which at Intel is considered working a half-day.

By day three in Israel, we mastered the highway system. This was important because Israelis weren't much help with directions. I asked an Israeli coworker which highway he used to drive home; either he didn't know or particularly care, all he said was, "I just go." Luckily, one of my tour books included an Israeli highway map. Sure, I could have purchased the map locally rather than drag that one ten thousand miles, but that would have been too easy.
0 comments leave a comment 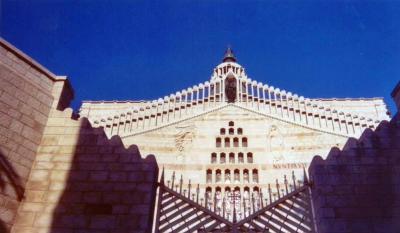 Chuch of the Annunciation, Nazareth
First stop, Nazareth, to see the Church of the Annunciation and Mary's Well. A few miles southeast of Nazareth we approached Mt. Tabor, the site of the Transfiguration. Here a cloud hovered and Jesus glowed in the presence of his disciples as God declared Jesus to be his son.

The physical environment matched my mental picture of biblical times. The hillside surrounding the highway appeared timeless as if it hadn't changed in two thousand years. 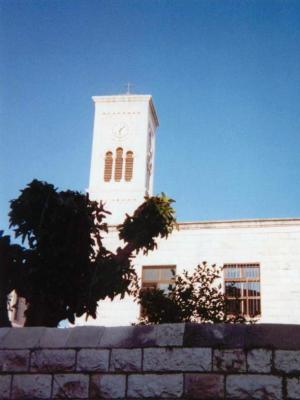 Chuch of the Annunciation, Nazareth
Fresh out of the car, Adam was back to his friend making. He discovered that his Arab brethren made up ninety percent of the Nazareth population, half Christian and half Muslim. I learned themes of "deals" and "free gifts" are common in gift stands as we walked up church hill.

An Egyptian storeowner lighted up once he heard the Iraqi’s accent. Kamal pulled out all the stops upon meeting Adam: Cola in see through cups that you aren't sure whether to drink out of or pee in and plastic crates he treated as thrones for us to sit on. Adam alerted me that he would be working Kamal for a souvenir discount. However, the charges appeared skewed. I asked Kamal why the difference between Adam's discount and mine. He explained, "Adam is friend and you is business." Great, I really piled it on due to Adam's assurance. Kamal, thanked me, laughed at me and kissed me twice after sticking me with the bill.
0 comments leave a comment 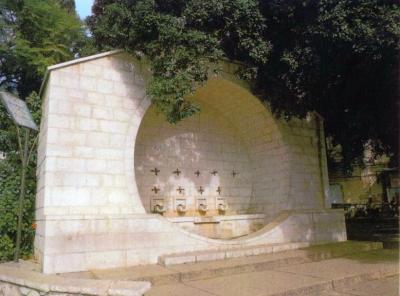 Mary's Well, Nazareth
The Church of the Annunciation is the largest church in the Middle East. It is built on the place where the angel Gabriel announced to Mary that she would be the mother of Jesus. The church entrance was closed but a ‘friend’ of Adam's let us in the courtyard for picture taking. Down the street from the church sits Mary's Well where Gabriel first appeared to Mary, apparently for introductions prior to the Annunciation.
0 comments leave a comment

Sea of Galilee
We drove by Cana where Mary and Jesus attended a wedding where wine was running low. When Mary insisted that Jesus do something about it, Jesus was quoted as saying, "Woman, what is this to you and to me? My hour has not yet come." Jesus turned water into wine that day, relieving the newlyweds of an embarrassment.
0 comments leave a comment 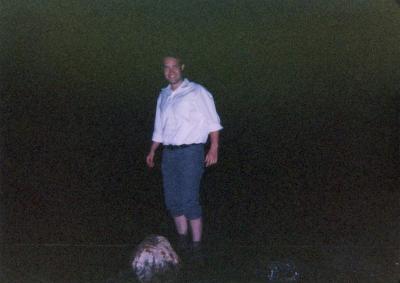 Sea of Galilee
The Sea of Galilee was the place I looked forward to most due to its historical and biblical significance. It is Israel's only freshwater lake and the location where Jesus healed a leper, stilled a storm, walked on water, and met his disciples after his resurrection. Very powerful to drive along the shore and think about those events. Adam pulled over to allow me to swim with the daylight that remained. "No swimming" signs decorated the shore so I waded in the water instead. The warm water made for a peaceful, calming stop.

Clothing and food stands were scattered along litter filled streets in downtown Tiberias, a resort town overlooking the Sea. I planned our evening meal at a place called Peter's Fish. However, I decided not to make Adam walk around searching for the name of a restaurant I made up. We stopped to eat Shawarna per a street vendor’s suggestion. It tasted like a Gyro with turkey and humus instead of lamb and tzatziki sauce.

After the meal, lack of sleep caught up with me. I slept most of the way on the return to Haifa.
0 comments leave a comment 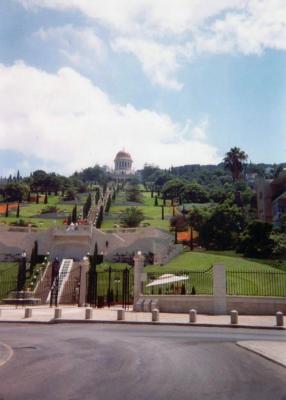 Bahai Gardens, Haifa - July 15th
Gloom er Nick and Rich rode with us Tuesday so I figured it would be straight to the hotel after work. OK by me. I wasn't feeling so well after spending days in a car with Adam who was sick the previous week in Malaysia.

Earlier, I planned a full evening of site seeing. I chose the towns of Tagba and Capernaum on the north shore of the Sea of Galilee. In Tagba, I was interested in seeing the Church of the Multiplication of Loaves and Fishes. This is the site where Jesus fed more than five thousand people with five loaves of bread and two fish. Many recorded miracles were performed in Capernaum including healing the sick, blind, paralyzed, and raising a girl from the dead. Jesus moved his ministry here after being rejected in Nazareth.

Our invitation to Nick and Rich to join us turned sour when Nick insisted we return to the hotel for his camera. I wasn't going to spend an hour of daylight chasing down a camera. “Not as much fun taking pictures in the dark,” I said to Nick.

Since it was well after dark we agreed to see the sights another day. On the way back to the hotel, Adam flew by the exit. Had he missed the exit? Fallen asleep at the wheel? Not seen my pale, take me directly home face or noticed me sweating profusely, hacking and blowing my nose? Turns out, that sight seeing junkie knew if he passed the exit, the only route back to the Dan Hotel was by way of the Bahai Shrine and Gardens. Bad Adam!

The terraces of the Bahai Gardens stretch up Mt. Carmel to a point where you can see Lebanon. A golden-domed Shrine sits in the middle of the gardens commemorating the first prophet of the Bahai faith.

The only sight I was interested in seeing at that point was my bed and bathroom. Not sure if I was dizzier from the now full blown Malaysian bug my temperature had risen to fight or from taking sharp turns sitting in the back seat. Either way I was pissed! Calm yourself; think of some way to get out of this. Hmmmm. I'll try, "Adam, we should enjoy these sights when we can actually see them and make this a drive Bahai."

This got a laugh but more importantly turned discussion from "hey lets stop there afterward" as we drove near the gardens. Nick added that if he would have been permitted to get his camera he could have made a drive Bahai shooting. It was clear we were heading home.
0 comments leave a comment 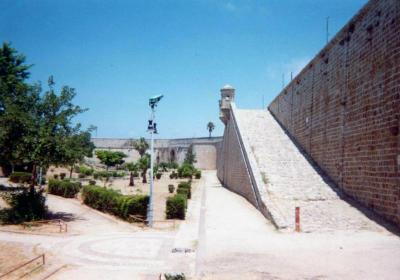 Akko - July 16th
Every morning we attempted to leave the hotel parking structure Boris, the Russian gatekeeper studied Adam's parking receipt, questioned us then phoned his manager as if he had never seen us before. None of Adam’s languages were Russian, so miscommunication continued. Wednesday morning I was a little nervous; added to their misunderstanding routine, they were shouting, smiling and throwing their arms up at each other. “Hey Adam, how about we don't piss off the parking attendant, I would like to get to work today.”

I was extremely tired and still sick. Israel is ten hours ahead of west coast time and five hours behind Southeast Asia. This makes for some interesting meeting times while calling from Haifa to coordinate product development teams (Oregon, San Diego) and volume factories (China, Malaysia). Some of the meeting times hit inside my limited 11PM - 3AM, 4:30AM - 7AM Israel sleep regimen.

We learned at work, the day belonged to us because it would take analysts until 5PM to prepare a schedule review. Daytime site seeing threw me for a loop since a night shift for me was normally preceded by a full day of work.

"Where are we going, when are we going?” Adam asked. We stayed and worked for a few hours. During that time I decided on two locations south of Haifa: Jacob's Well and the hill of Megiddo. Jesus revealed himself as the Messiah at Jacob’s Well. It was here that Jesus asked a woman for water then told her that those who believe in him would never thirst and have everlasting life. The hill of Megiddo is the site believed to be the final battle between Christ and Satan: Fight night and under card TBA.

All week Adam and I had been getting along famously, eating together, laughing together, making fun of the killjoy bothers, me as the travel planner and he as the native speaking driver. Yet a famous well and the end of the world weren’t good enough for Adam. “You want to go BACK to Nazareth? Nazareth? Too much to see to backtrack my friend, where is the story in that?”

We agreed to drive to Akko then the Sea of Galilee. A dip in the lake on such a humid day sounded magnificent! I decided not to be a hypocrite by spending travel time chasing a needed item. No swimsuit, no problem.
0 comments leave a comment 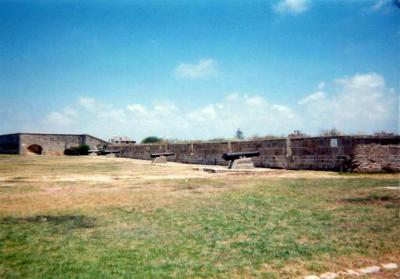 Akko
Napoleon claimed that if Akko had fallen, "the world would have been mine." Long after Egyptian, Persian, Greek and Roman rule and Napoleon's unsuccessful siege, Crusaders captured the city. Crusaders elevated Akko's importance as a port city and transformed its culture and architecture.
0 comments leave a comment 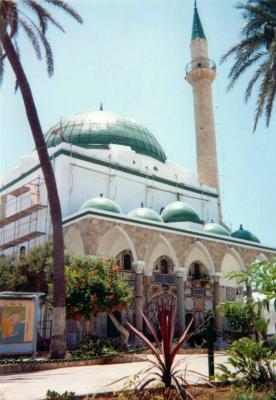 Akko Mosque
Akko is split into Jewish and Muslim sections. We stopped for Israeli pizza in the Jewish section and shopping in the Muslim area. Adam warned owners in souvenir stands where I bartered that I would leave if they did not give me a good deal.

We climbed steps to the top of a wall that revealed artillery cut outs and beneath, a stone fortress with bunkers and cannons overlooking the Mediterranean Sea. The top of the wall opened up to a panoramic view. I saw the surrounding sea, the city sprawl and caught a glimpse of a Mosque.
0 comments leave a comment