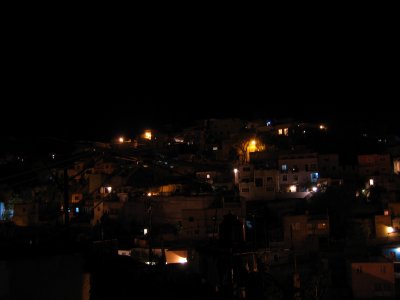 Guanajuato arrival
Jen and Elias, an employee of the school, met me at the airport in Leon and then we drove into Guanajuato. My plane out of Houston was running late, so we got to Guanajauto well after dark.
Here's what the city looked like from the roof of our hotel (about 3 stories high).
0 comments leave a comment 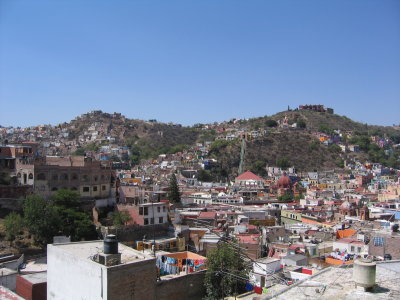 Saturday morning
This is more or less the same direction, Saturday morning. Let the adventures begin! Time for a walking tour of the town.
0 comments leave a comment 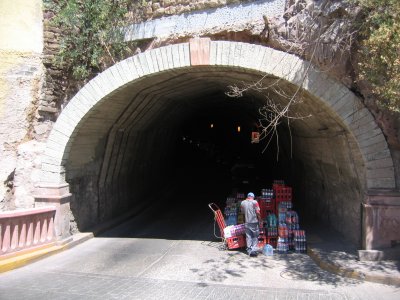 Tunnels everywhere
Guanajuato is a mining town, at one time the richest town in all of New Spain and after Mexican independence. They originally put Rio Guanajuato under the town, then rerouted it altogether after a bad flood. They built more tunnels for car traffic, and today the tunnels are fairly well used, although there is a lot of car traffic on the surface.
It was reassuring to see that the town is well supplied with Diet Coke, my preferred caffeine vehicle.
Por favor, un Coca "light."
0 comments leave a comment 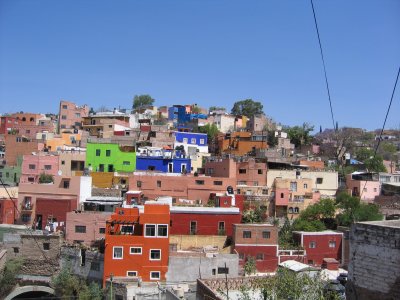 Colorful hills
Most of the town is on hills, and the homes are painted very vividly.
0 comments leave a comment 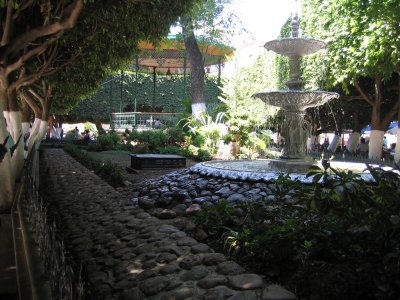 Jardin
The Jardin de la Union is a very cool (literally) place in town, probably the coolest, owing to the fountain (evaporative cooling) and the trees (forest microclimate).
It was there we saw a guy in a soccer jersey that was gold and black stripes, said "Steelers" on the front with a "32" on the back.
Folks here have good taste.
3 comments leave a comment 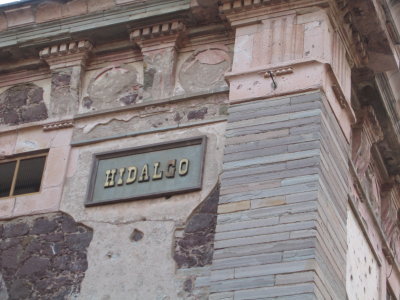 Father Hidalgo
The Mexican War of Independence got its start in this region (don't confuse it with the "Revolution" which took place later). This is the corner of the Alhondiga, which was originally a granary. In 1810, an independence movement began, led by a 57-year old priest, Miguel Hidalgo. This was then a Spanish fortress, and Hidalgo's forces took this, spurred on by a miner nicknamed "El Pipila" (more about him later).
Although the rebels took this particular fort, the movement was crushed. Hidalgo was executed, and his and three other leaders' heads were put into the cages hung from spikes (look closely upper right) on each corner of this building. The Spaniards left the heads there for some time.
The War got started on September 15, which is Jennifer's birthday and she was told that makes her an honorary Mexican! It took 11 years before independence, and 600,000 lives. September 28, 1821 was Mexico's Independence Day.
0 comments leave a comment 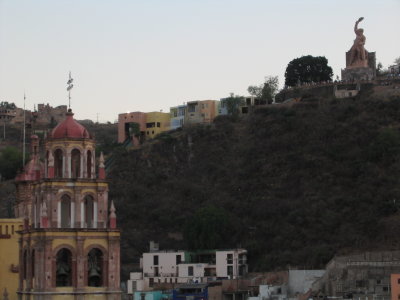 El Pipila
That's the monument to El Pipila in the upper right. He crawled to the doors of the Alhondiga and set them afire, allowing the rebels to take the fort, (the guide books give mixed indications if El Pipila (The Turkeycock) lived).
0 comments leave a comment 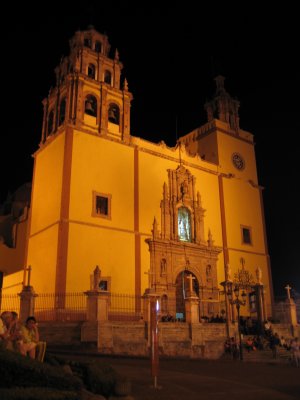 Basilica
The Basilica de Nuestra Senora de Guanajuato is a beautiful church up the street from the state legislative building (Guanajuato is the capital of the state of the same name; Mexico has 31 states and its official name is "Estados Unidos Mexicanos").
The church has a very old statue of the Virgin that Felipe (Phillip) II gave in the 16th century as as thanks for making Spain very wealthy through the silver and gold mined here. The statue is made of wood, but don't assume the King was being cheap (or ironic): it was a sacred relic having been hidden from the Moors for a couple of centuries.
0 comments leave a comment 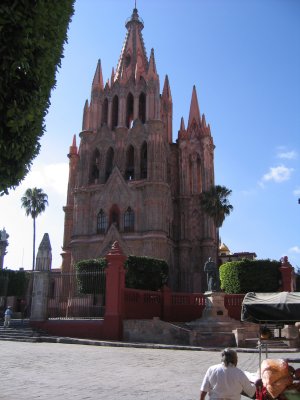 San Miguel, Sunday morning
Sunday morning we woke up early and headed to San Miguel de Allende. Just like the nearby town of Dolores Hidalgo, this town has had the surname of an independence movement leader appended to its name. The bus ride was about 2 hours and cost 65 pesos (about 10 to a US dollar).
This is the Parroquia de San Miguel Archangel.
San Miguel is about 10% foreigners (mostly US folks) according to the guide book. Seems like there were more English-speaking Mexicans and billingual signs here.
0 comments leave a comment 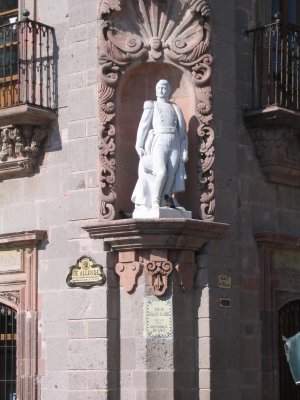 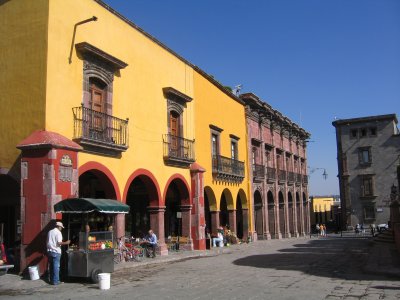 Sleepy Sunday morning
Some of the businesses around El Jardin.
0 comments leave a comment 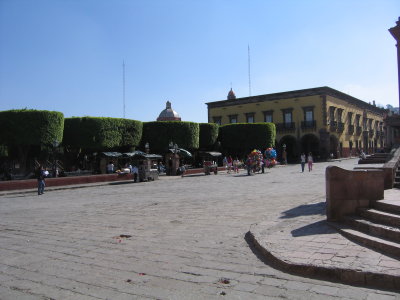