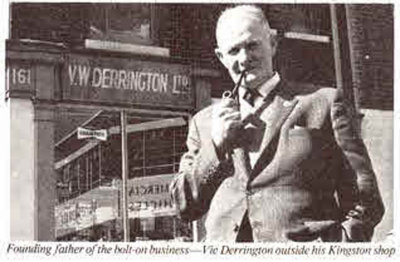 V. W. Derrington
Victor Derrington first started making steering wheels in the early 1950s and applied for a patent on his wood rimmed model in 1954. There is evidence that he may have started with a leather rimmed wheel or made them at or around the same time as the wood rimmed wheels.
The Derrington steering wheel is perhaps the most widely recognized and copied design among
classic period wheels. The name Derrington over time has become a generic and is very often
misused to describe any steering wheel with equal spoke spacing. Please take some time to read
my blog on the Derrington for the history and details behind the original making of this very
popular design.
I make versions of the Derrington spoke in 15", 15.5", 16", and 17". I make them with woods of
customer choice, or with alternating color laminates as original. I make both the early eight bolt mounting and the more common nine bolt.
0 comments leave a comment 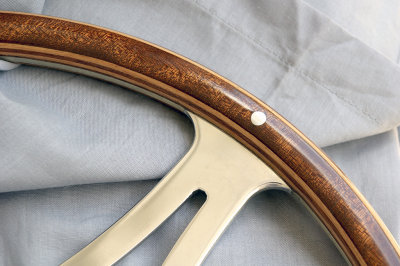 Lempert - Derrington style rims
The Victor Derrington steering wheel was made using a multi-layered laminate of mahogany and obeechi (obeche) or white maple. This made for a beautiful rim with contrasting colors. While others copied this design, they often fell short with the quality of the wood, sometimes using just a marine plywood. Still, even with an original Derrington rim, the colors were sometimes compromised by the very nature of a ply laminate construction. Laminates of this type were constructed with veneers laid with the grain direction running perpendicular to the one below it. This approach displays end grain around a significant portion of the rim, reducing the beauty of both the grain and color. This is particularly troublesome today when the wood has had its colors muddled from age and exposure.
Whether re-wooding an original Derrington steering wheel or creating a whole new replica, a Lempert Derrington style laminate rim is made to a higher level. We have developed a process that, while more complex and labor intensive than a simple plywood, results in a spectacularly beautiful rim without the downside of a typical laminate. All layers of a Lempert laminate rim are cut from bent wood wrappings, resulting in the grain always appearing the same all the way around the perimeter of the rim. We start with two wood wrappings; one mahogany and one beech, then slice the rings into thick veneers. The veneers are then surfaced to precise thicknesses and the two types of woods are then laminated in alternating fashion. The last layer, the top of both front and rear are then applied using a select mahogany cut very precisely to expose beautiful ray flake grain.
0 comments leave a comment 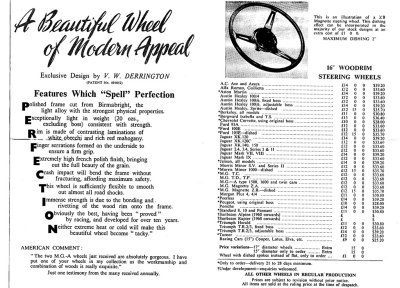 Early Advertisement
This advertisement shows all the cars that had wheel/boss combinations available. Also note that 16" was the standard with 15" and 17" as special order.
0 comments leave a comment 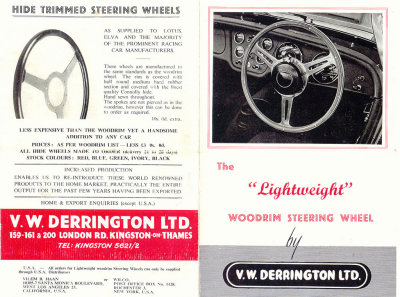 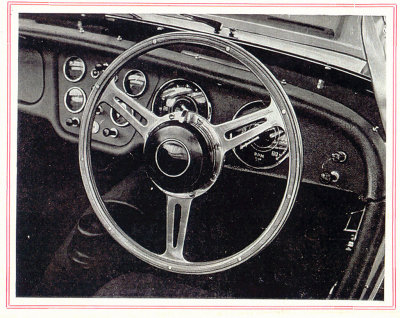 Original Derrington Steering Wheel
This close-up picture from a Derrington brochure shows how the mahogany and obeechi layers contrasted, as well as again displaying the 8-bolt mounting pattern.
0 comments leave a comment 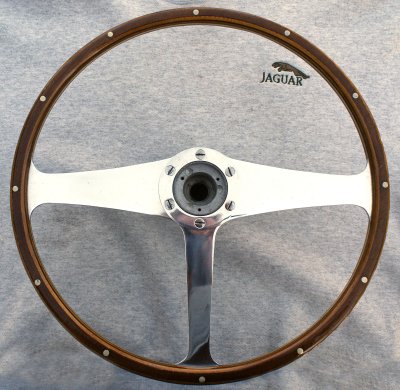 Derrington - Jaguar MK 2
This original Derrington Jaguar MK 2 steering wheel is an example of a 17" with different spoke design made just for that Jaguar. These wheels were only made in 17" size. Some had two additional holes to left and right of center to couple with the horn ring assembly.
0 comments leave a comment 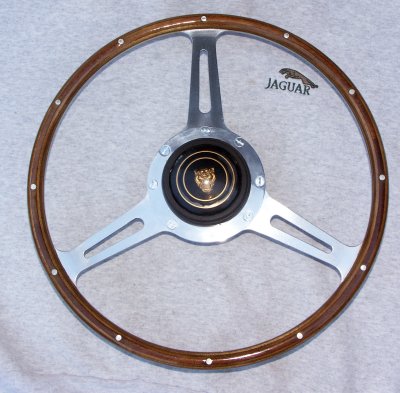 Jaguar XK Original 17" Derrington
This original Derrington was a special order 17" version for XK140-150. While well preserved, note how the lighter color obeechi has become darker over time and no longer gives the wonderful contrasting look.
0 comments leave a comment 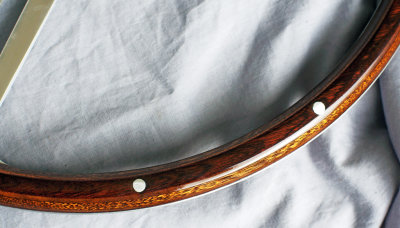 Derrington rim segment
This close-up picture shows the muddled colors from the exposure to light over decades of time. While the mahogany is a rich, dark red color, the obeechi has also darkened.
0 comments leave a comment
A Blog for Healey listers 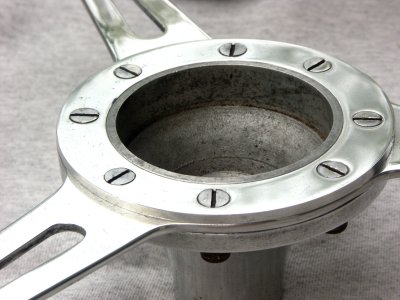 Derrington and Nardi are possibly the most well know names in steering wheels. Victor Derrington is the originator of the Derrington steering wheel and also had a patent applied for on October 18, 1954 and granted on October 5, 1955. Victor did make various styles (spoke configurations), including dished, but it was the flat, slotted spoke with even spacing that became the wheel most think of when hearing the name Derrington. And since those early days and the popularity of his steering wheel, the name Derrington has become a generic for any wheel with that spoke configuration. However, the original Victor Derrington wheel had very specific characteristics that allow it to stand out among all the others. They are: slotted spoke, even spacing, an eight hole center mounting, and laminate rim from mahogany and either obeechi or white sycamore (actually maple). Those original wheels had either nine or twelve rivets in the rim. They were produced as 16" standard with 15" and 17" as special order. At some point Victor adopted the more standard nine hole center mounting and started to outsource some of his work. Moto-Lita was one of the outsource providers. Simon Green had started Moto-Lita in 1957 as a very young man. During some period of time in the early '60s, Simon provided "Derrington" steering wheels to Healey for optional sales. Healey provided a sticky badge with each one indicating that it came from Healey and it also had the customer's name on it. It was a nice touch of personalization. The Moto-Lita made wheels were not of the same high quality of Victors wheels. Victor also made wheels during that time, but since his wheels were not marked, and there were others making them, there is not way of being certain which ones were actually made by Derrington other than a guess based on assessment of quality and certain details. Today we might consider any wheel of the same spoke configuration and ply style laminate rim to be a Derrington "style" wheel, but as with everything else, a precise Derrington replica would have certain of those original characteristics. While I very much admire what Simon Green did there at Moto-Lita, and his ability to survive through all the lean years when wood rimmed wheels fell out of favor, his early wheels were not of very high quality. Today, Moto-Lita makes a number of wheel styles, but with little attention to detail when replicating certain important designs of the past. The Moto-Lita rim of today is a ring cut from marine plywood, not the high quality mahogany and obeechi laminate of earlier Victor days. Moto-Lita is a steering wheel mill focused mostly on fading profit. Sadly, Nardi also suffered in quality after Enrico's death in 1966. My blog on the Victor Derrington steering wheel may be helpful with details I have not covered here: http://www.pbase.com/mdlempert/victor I will be happy to answer any question on the details of the Derrington should anyone have an interest. Mike Lempert
1 comment leave a comment