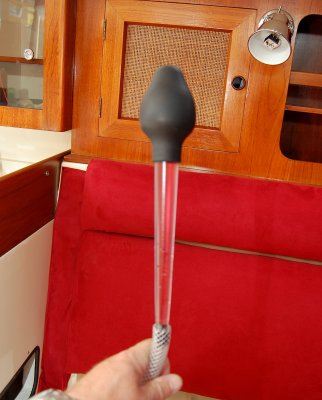 Filling The "Sucking" Hose
As you can see I've sucked the turkey baster full of antifreeze and am now pre-filling the hose to the water pump. 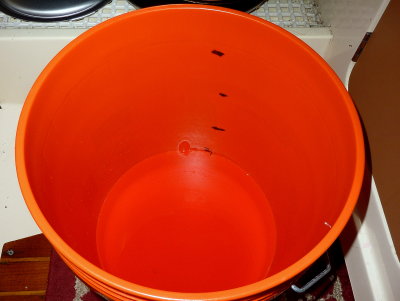 The 5 gallon bucket I use for PG antifreeze has been graduated with a Sharpie marker at each gallon. This makes it easy for me to stop pumping, take a concentration measurement, and then continue. In the end I know exactly how many gallons it took to get the right concentration into the system, no more, no less.. In this image the bucket has exactly 1 gallon in it...

Each of the boats I winterize has a winterizing info sheet derived from the first winterizing I conduct on the vessel. The engine & domestic water systems are tested for concentration/freeze point with a sight refractometer to determine exactly how many gallons it takes to properly protect the system and reach the undiluted point. The next year I pull the winterize sheet up on my computer or iPad and know exactly how many gallons is required for the engine and how gallons for domestic water. This step avoids guessing and waste.

Remember a refractomer is measuring the PG's "freeze point" not the burst point. Don't be alarmed if a sample straight from the bottom reads 7F - 10F. What comes out the taps or engine exhaust should ALWAYS match a sample straight from a virgin bottle of the AF you are using. In other words if your West Marine Pure Oceans -50F reads 8F then what comes out of the taps or engine should also read 8F. 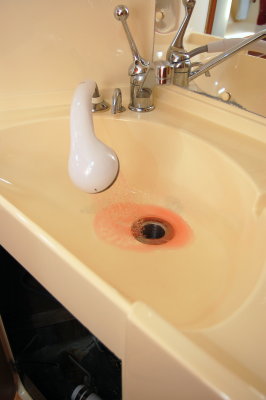 Ready To Antifreeze The Pipes

Step 7: Sucking The Antifreeze Through The Water System:

With the hose full of antifreeze and the pump primed, use a clean bucket, or the hose stuffed into a gallon of antifreeze you are now ready to flip the switch.

Turn the water pump switch on and open each tap, in rotation, until it runs a color that looks the identical color in the bottle.

Run and test each tap until the concentration of the PG matches exactly what is in the new bottle. If you don't have a refractomer samples in a clear wine class placed next to a new undiluted sample can give somewhat decent guidance. When in doubt suck in more!!

Another gallon or two will ALWAYS be less costly than a freeze up!! 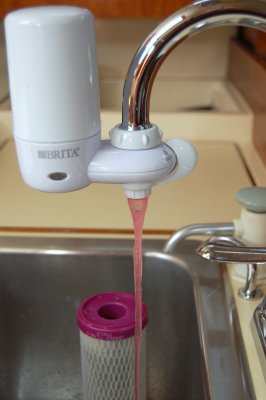 Make Sure You Get Pure Pink

After you flip on the water pump switch open each and every faucet, shower head or wash down fixture. I suggest doing them one at a time, first cold then hot at each faucet. Do this to be sure all the lines are getting pure pink the same exact color it was coming out of the bottle.

Remember this type of RV antifreeze is not intended to be diluted AT ALL. Diluted antifreeze means warmer burst & freeze points. If in doubt, you can always suck one more bottle through. 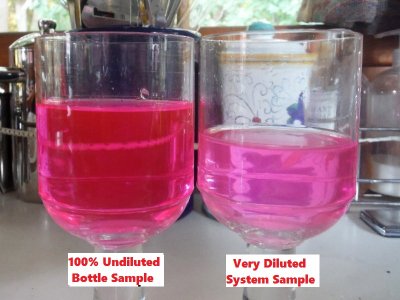 When your sample from each tap is on the extremely diluted side the differences in color are easy to spot.. This was an approx 18F spread on the refractometer. NOT GOOD!!!

Merely seeing pink is not the proper way to winterize your system!! 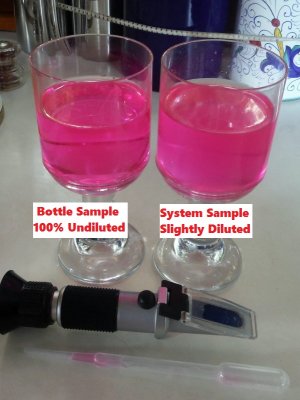 They May Look The Same

In this image we have an out of the bottle sample and a sample from the spigots. This was at 3.5 gallons sucked in to the system pipes only. The refractometer readings were still a 4 degree spread.

I am not happy until the refractometer readings match perfectly. 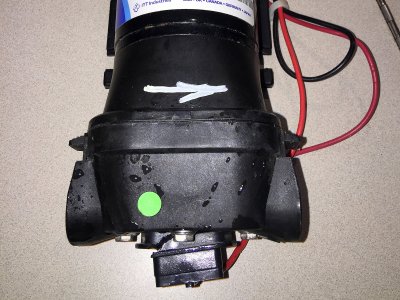 I see far too many frozen, split and destroyed plumbing parts including pumps, valves, and even water heaters each and every spring. I also see frozen and split heat exchangers for engines. This stuff is ALWAYS more costly than an extra gallon or two or three of propylene glycol.

The act of merely "seeing pink" tells you little to nothing. This owner sucked 2.5 gallons into the fresh water system of a 44' vessel based on the "I saw pink" protocol... D'oh..... 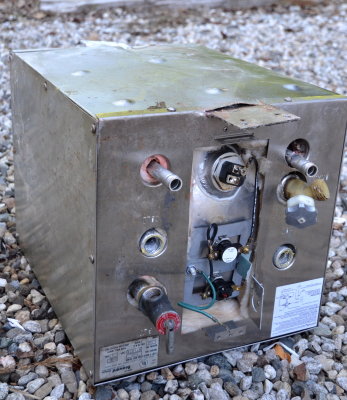 The drain cock on this water heater is there for a reason! This owner sucked 6 gallons of -50F antifreeze into his 6 gallon water heater & system without bypassing the water heater......!


DO NOT DILUTE YOUR PROPYLENE GLYCOL!!!


It would take far more than 6 gallons of antifreeze, in a 6 gallon water heater, to get zero dilution. 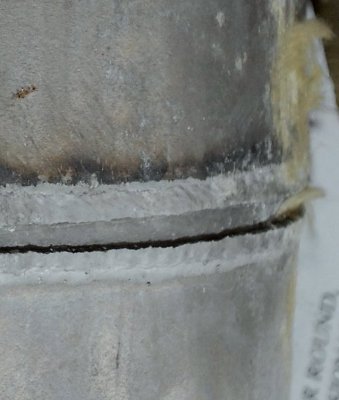 Here is another prime example of why marine water heaters are DRAINED in the winter. This owner attempted to dilute the six gallons of water with seven gallons of antifreeze.... Seems reasonable... WRONG!

Fill a 16 oz glass with milk. Now place it under the faucet and turn the faucet on. Let me know how many GALLONS of water it takes until the water in the glass is clear....... FAIL!!!!!! 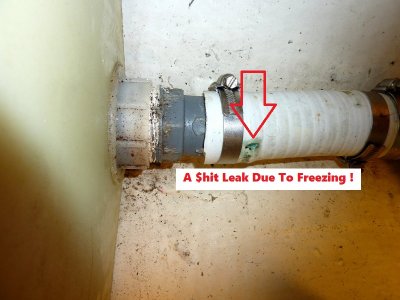 I know this article is about the fresh water system but I need to make a plug for the sanitation system.

This owner did a DIY winterizing and paid a really huge price. The price for improperly winterizing the holding tank was massively repulsive odors in the boat! Come spring when the frozen shit & urine melted the leaks began, this was only one of them. The entire boat wreaked of raw sewage! He went in late and the leak was not discovered until early June. Under the hot cover the odors had baked into everything. He had flushed one gallon of -50F PG through the head. His hoses held more than one gallon and the tank still had at least 3-4 gallons in it!

This is also another reason I do not like elcheapo PVC sanitation hose. Every leak from freezing was in the white PVC hose... Rubber based hoses may have survived this, PVC did not.

#1 Holding tanks should be COMPLETELY empty BEFORE you winterize them.

#2 Hoses from head to tank should be purged of effluent by dry pumping.

#3 Try to wash out your tank before putting the boat away. Most tanks have a clean out port, use it.

#4 Ask your pump out guy to do a flush service. Evacuate, fill with clean water, re-evacuate.

#5 You may need a manual pump to get the tank dry. Pump into a 5 gallon bucket and pour it into a land based toilet. 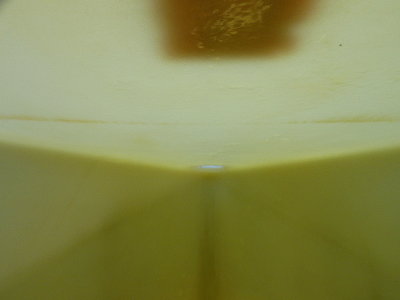 As A Point Of Reference

I do not accept sanitation odors as normal on our boat, or any boat. As a point of reference this is what the inside of the holding tank looks like on our boat each fall. The photo was taken through the clean out port. This is what it looks like before she is winterized.

The tank is pumped out, back flushed, pumped out again then physically hosed out via the clean out port. I then fully bleach sanitize the tank and it is 100% drained via a dip tube and utility pump. I use 1/2" PEX as the dip tube and a small utility pump to get all the contents out.. A little extra work? You bet, but well worth it to me.. The hoses are also pre-purged/rinsed before any antifreeze goes into the system.

We have zero sanitation odors on our vessel.... (wink) 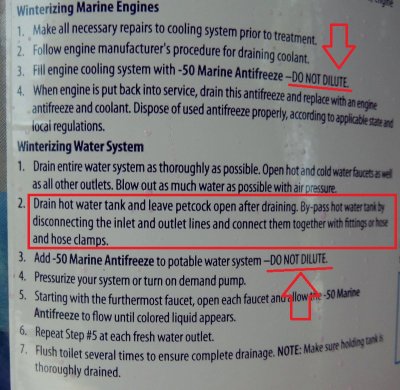 I will leave you with this image..

I simply can not stress enough the importance of not diluting the PG mixture in your systems. When in doubt SUCK MORE PG IN or physically TEST IT..

Water heaters are always drained and by-passed you do not run pink through them! See red highlighted paragraph...