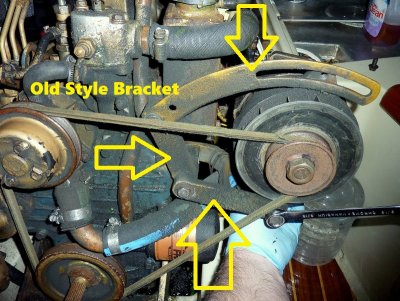 The original Universal M-25 diesel engines from Westerbeke / Universal had an obscenely poor alternator bracket design as they shipped from the factory. As long as the bracket did not fracture you could run them for a period of time without too much issue. Boats normally tied to a dock with constantly charged batteries seem to fair better. Boats that are cruised and the batteries deeply cycled seem to break these brackets more often.

The problems arise when, not if, they do fracture. When these brackets break they often puncture the oil filter and can often take out the entire timing gear case in the process.

The original bracket is also made of cast aluminum which is simply a very poor choice for driving the needed HP of an alternator. The new bracket is welded steel.

Keep in mind that when, not if, this bracket fails you will be dead in the water with no engine. The belt on these engines drives your fresh water cooling pump and this is required to run the engine. No alternator not cooling....

This image shows the old alternator bracket design and LOTS of belt dust.... 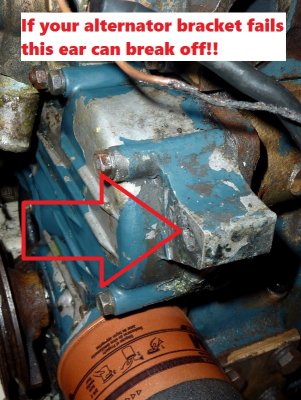 RANT ON: If you own an M-18, M-25 or an M-25XP with the old style bracket, and have NOT done the alternator bracket upgrade, DO IT NOW!

This information has been out as common knowledge now since the early 90's, June of 1991 to be exact. It may even affect some early M-25XP engines not just the M-25. There is NO EXCUSE!

Here is the Westerbeke Service Bulletin:


Why is this so important you ask? Take a look at this photo. This blue peeling painted item is the timing gear case. It is a MAJOR job to replace it.


This engine had already experienced ONE failure of the timing gear case. Sadly the people who put it back together still did not upgrade the alt bracket. A 3K bill for a job done incorrectly, and then had to be redone, is really sad, but it happens...


Beyond that this timing gear case is NO LONGER AVAILABLE! You break this gear case cover and your engine is now SCRAP METAL. According to Westerbeke Kubota discontinued it & Westerbeke can not get them. Even if they could get them the last pricing for that timing gear case, which is part #300140, was $1261.40.


Parts You will need if you break the timing gear case:

Is the severity & critical nature of this upgrade sinking in yet....?

Did I mention this part is NO LONGER AVAILABLE !!!!!!

Really, I simply can't make it any clearer than that... 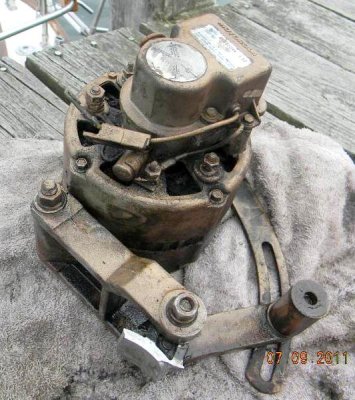 This piece of $hit alternator bracket design got really hungry, so hungry, it ate the timing gear cover.

As can be seen here the evidence is still in its teeth...

I have hears many experts on the M-25 espouse that this fracture only occurs if you put a larger alternator than stock on these engines. This is completely and utterly FALSE...

This is the STOCK alternator and the bracket lasted about 20 years before the timing gear case broke. You may get lucky for a while but the clock is ticking!!!!!!!!!!! 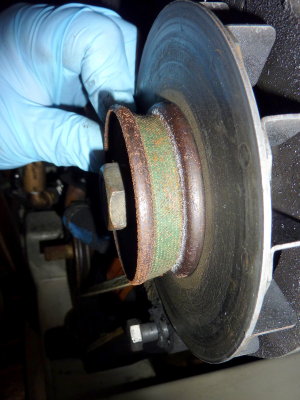 This is one I come across far too frequently. This alternator was replaced and the replacement alternator shipped with a 1/2" pulley. Why is that bad? These engines use a 3/8" belt!!!!

No matter how much you tighten this belt it is going to slip and create belt dust, because the belt is too small for the pulley!

Multiple attempts were made to fix this issue, at a decent cost to the owner, and not a single technician noticed the wrong sized pulley OR THE ALTERNATOR BRACKET.... 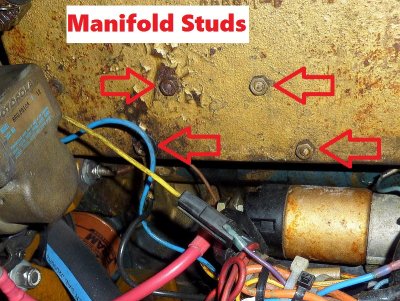 The Manifold Studs Are Too Short

Occasionally you will have an M-25 with longer manifold studs as it shipped from the factory. Unfortunately this engine was not one of them. In order to install the new alternator bracket it utilizes the manifold studs to hold the new bracket to the engine. If these studs are too short as they are here, they need to be replaced.

NOTE: If you have any room at all to get a second nut on the stud they can be pulled without removing the manifold! Unfortunately, as can be seen, this engine had zero clearance beyond the nut necessitating removing the entire manifold to do this job. Not all engines came with studs this short. If your are long enough to get two nuts on USE THAT METHOD..... 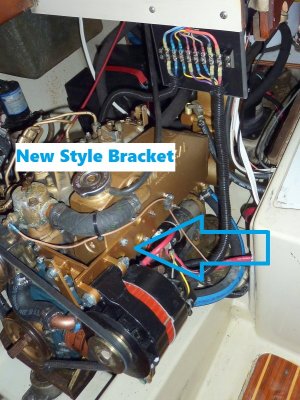 In this photo we can see the newly installed upgraded alternator bracket. If you click the photo to make it larger you will see how it is held onto the engine using the manifold studs. This is why the old studs must be replaced if they are too short.. 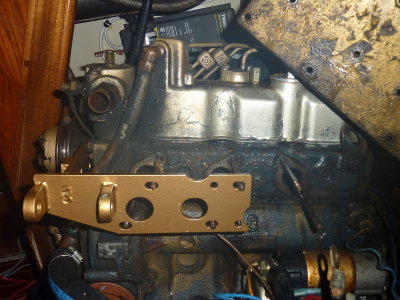 This is the upgraded alternator bracket for these engines. For grins I just slid it onto the old studs so you can see where it mounts to. 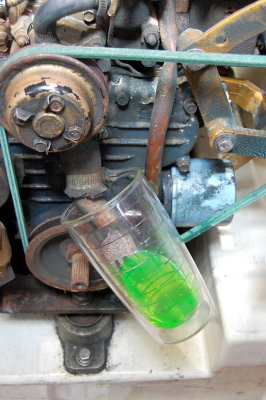 Yes this job is a PITA but is better than the consequences of having to replace the timing gear cover when, not if, the alternator bracket finally fails..

This is a good low spot to begin draining the coolant from the manifold and engine.

If your original bracket has not failed, YET, consider yourself very, very lucky..... 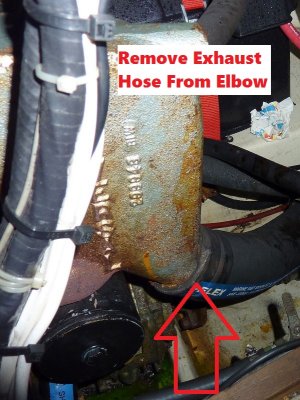 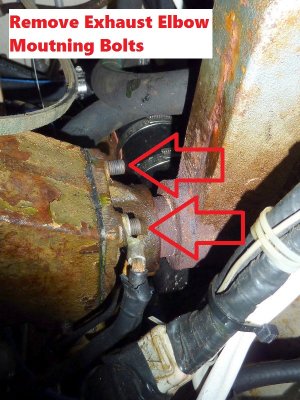 There are only two arrows here but there are three nuts in total. Two nuts on top and one on the bottom. Remove these nuts then break the exhaust elbow free from the aft end exhaust manifold. 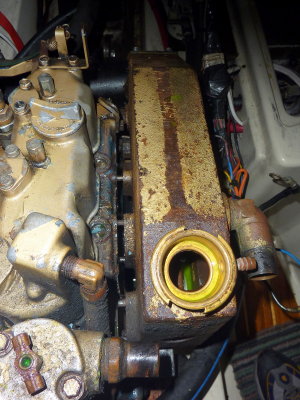 There are six nuts holding the exhaust manifold to the engine block. Remove those nuts and break the manifold free from the engine.

In this picture the manifold is separated from the block and sliding out off the studs.