This blog breaks down the different parts, definitions and thread components of seacocks and thru-hulls. It also takes some eye opening measurements of a bronze thru-hulls actual thickness.

Thru-Hull, Flanged Adapter Plate & Bron
This picture shows the complete assembly minus the boats hull. Note that the handle clearly states Marine Rated. Use only Marine UL rated valves and seacocks for below water line applications.

Many insurance companies demand this for coverage and insist on marine rated valves so don't cut corners here. 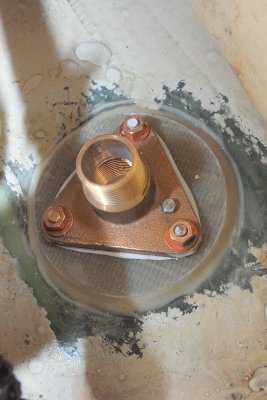 Flanged Adapter Plate Installed
Here is a picture of a flanged adapter completely installed in a vessel. The fiberglass backer was epoxied to the hull and through bolted and the flange bedded in Sikaflex 291.. There is no risk of breaking a seal with a through bolted flange when threading on and off a replacement or new sea valve because the three bolts hold it in place and prevent twisting and potentially breaking the seal when you apply a pipe wrench. 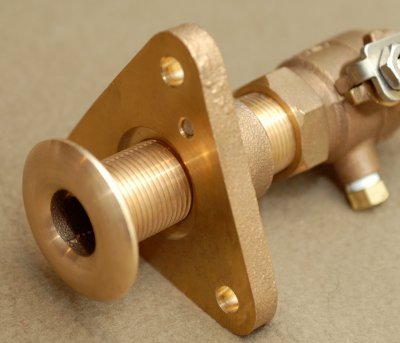 Thru-Hull Threaded Into a Flanged Adapter Plate
Here the thru-hull has been threaded into the Groco flanged adapter plate. Straight threads to straight threads, a perfect match.

Mismatched Threads !!!!
I've had a lot of emails and questions regarding the "mismatching" of different thread types such as NPS (NPSM) and NPT.

Someone challenged the idea that mismatching threads was OK because "so many do it" so last night I made a cut away view to show why using two different thread types is really not such a good idea even if "so many do it".

While many boat owners & builders have screwed NPT threaded valves directly onto NPS threaded through-hull fittings it's clearly not a logical or the best idea. NPSM or NPS, as it's referred to, is the actual sub class of straight threads used in the marine industry. The M means "mechanical" seal they are not intended to seal or take pressure like NPT.

Manufacturers such as Groco warn against doing. Mismatching threads is done by lots of people but as you can see you don't get a lot of purchase compared to using matching threads. All threading machines have slightly different tolerances and some straight thread might screw in more and some may screw in less. The parts in the photos were purchased right off the shelf at my local chandlery.

To make this photo possible I basically used a bronze nipple, or threaded pipe, with standard plumbing threads of NPT (National Pipe Tapered) and a bronze coupling also the industry standard of NPT thread.

I cut the bronze coupling almost in half, for a cut away view, so I could thread the NPT bronze nipple into one side and an NPS through-hull fiting into the other. I then sprayed each with a McLube, to reduce friction but save the picture quality, and threaded both the NPT nipple and the NPS through hull into the cut-a-way bronze coupling by hand and until I had an equal resistance.

The results even surprised me. As you can clearly see the NPT nipple threaded into the NPT coupling a quite a bit further than did the NPS through-hull. One would expect this because NPT and NPT threads match. If you were to take a wrench to both you might get one more turn at best out of the NPS through hull but you may still get two or three full turns out of the NPT nipple.

If you look very closely at the picture you can also see the outer-most threads of the through hull are already NOT fitting tightly against the female threads of the coupling and the inner-most threads are quite tight or virtually bottomed out...!!! The square peg evidently does NOT fit a round hole.

This coupling represents the threads of an in-line valve. Most all available ball valves or gate valves have NPT or tapered threads and most all commercially available through hulls have NPS or straight threads which is a clear & potentially dangerous mismatch.

Sticking a ball valve directly onto a through hull gives you about three or four threads between sinking and floating so I can't, with a good conscience, recommend you do it. For safety's sake I suggest using proper seacocks with flanges.

I would have cut away an actual ball valve but I don't have a machine shop. The coupling represents and has the same exact NPT female threads as an in-line valve of either the gate or ball type... 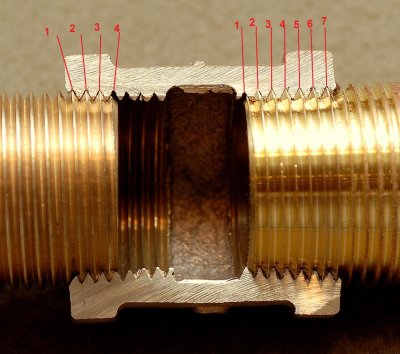 Mis-Match Count
In this close up you can really see why mismatching thread patterns is strongly advised against. There is a reason the ABYC (American Boat & Yacht Council) says the following: 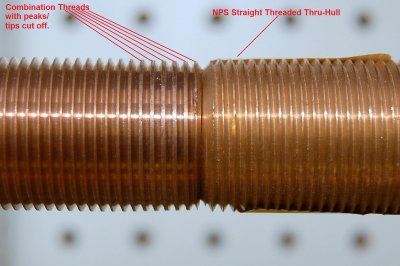 So What is a Combination Thread Thru-Hull
There is such a thing as a "combination thread" thru-hull. A combination thread is a half arsed way of making a ball valve thread onto a standard straight threaded thru-hull. Essentially the tips or peaks of the threads are machined off so the ball valve can thread over them and get more thread purchase.

If you click on the picture to make it larger you'll clearly see how the first few threads are shaved down. This does NOT make it an NPT thread just a band aid approach to get some more thread contact area. This design was likely driven by large production boat builders in an attempt to save a few pennies. While certainly better than mixing NPS to NPT I would think twice before using a combination threaded thru-hull with a ball valve. 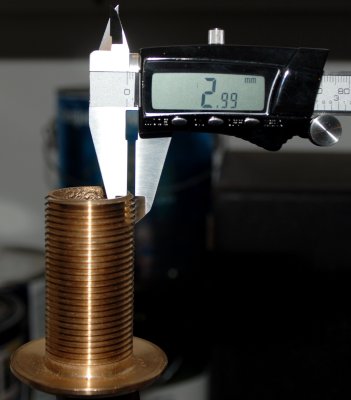 In this photo I am measuring the overall thickness of the thru-hull. It measured in at 2.99 millimeters thick.


I personally had this happen to me when a spare alternator hit my ball valve that was screwed directly to a thru-hull and cracked it. This is the number one reason I will now only use properly flanged seacocks and thread the thru-hull into it. 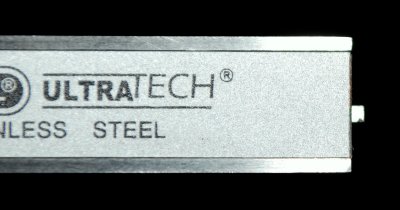 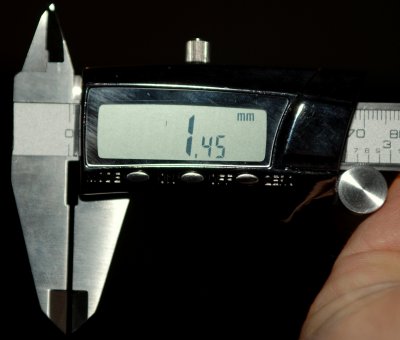 Thread Depth of 1" Thru-Hull
This photo shows exactly how deep the threads are cut into the the 1" thru-hull pictured above. The threads are 1.45mm deep on this thru-hull fitting.

If you subtract the 1.45mm thread cut from the 2.99mm overall thickness you get the remaining nominal wall thickness of 1.54 millimeters.

Yes, you read it correctly, the nominal wall thickness on this very popular Apollo 1" bronze thru-hull fitting is roughly the thickness of an average penny at only 1.54 millimeters. 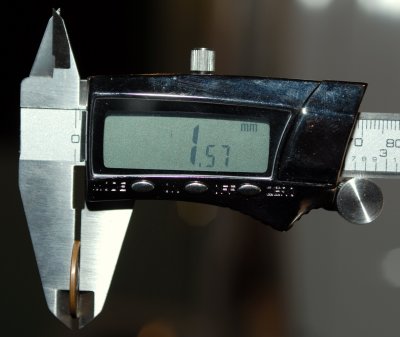 A Penny !!
As they say the proof is in the penny or is it pudding? As you can see the US penny is actually quite representative of the wall thickness of the Apollo thru-hull fitting pictured above. Again this was a brand new, off the shelf, 1" bronze thru-hull fitting purchased from Hamilton Marine.

In the photos below I measure the wall thickness of a seacock flange for the sake of comparison. 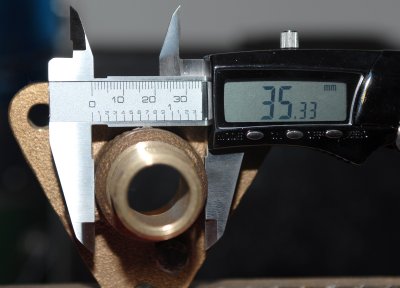 Measuring Outside Diameter of A Flanged Seacock
In this photo I'm measuring the overall thickness of a Groco 3/4 inch flanged seacock adapter plate. The overall outside thickness is 35.33 millimeters. 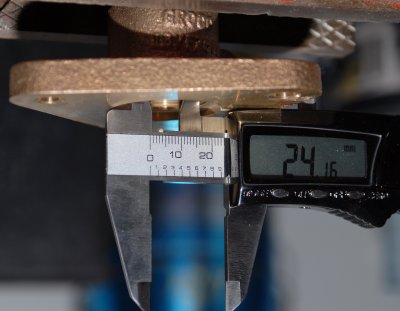 Measuring Inside Diameter of A Flanged Seacock
I'm now measuring the inside width to determine the nominal cross section thickness as compared to just the thru-hull from above. The inside width measured 24.16 millimeters. If you subtract 24.16mm from 35.33 you get 11.17 millimeters. That 11.7 millimeters then needs to be divided by 2 because I had to measure the OD/ID. To figure nominal wall thickness I used the thread depth of 1.26mm. Measuring these threads, inside the flange, would have been very hard and most likely not precise and they should theoretically be the same as the threads on the top of this fitting which I could measure.

With a nominal wall thickness of 4.32 millimeters this flanged adapter plate, at its base, is more than 2.8 times the thickness of the 1" Apollo thru-hull fitting I measured above.
click on thumbnails for full image