iPad Charging - How Much Energy? 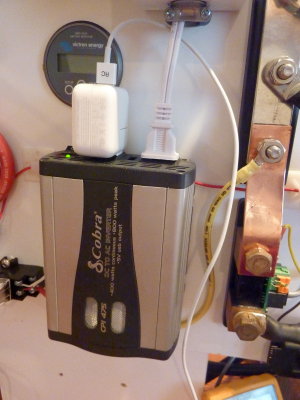 400W Inverter & Apple 120V Adapter
This morning I woke up to a dead iPad battery. I had to do some tax work for the business so I decided I might as well use the opportunity to connect my iPad Air to the Pentametric Battery Monitoring System and track how much energy it used to charge from 0% to 100% SOC.

For this first test I chose to run the iPad through a small 400W inverter off a 12V battery bank. I chose this method because it is the most popular way I see customers charging iPads. It is NOT the most efficient way!!

Later on in this article you will see that I also tested 0-100% charging via a 12V USB adapter. Suffice it to say it is much more efficient than using the inverter.

The battery bank was LiFePO4 so the voltage remained well over 13.3V for the entire duration. This could potentially make the inverter operate a tad more efficiently, but we are talking peanuts..

For this test the iPad was asleep except for the few seconds I opened it to snap a shot of the state of charge (SOC). This may not be representative of how you use one on a boat but we charge ours at night and while they are asleep.

iPad - Asleep and all apps closed 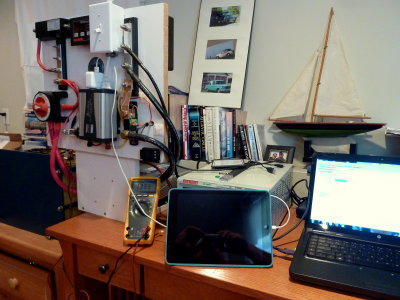 I have been conducting a lot of battery testing this winter and needed my test station in my downstairs office. It makes it very convenient to have the batteries in a good constant temperature..

Today I was just curious to find out exactly much energy it takes to charge an iPad Air 3G from a 12V bank via a small MSW inverter.. 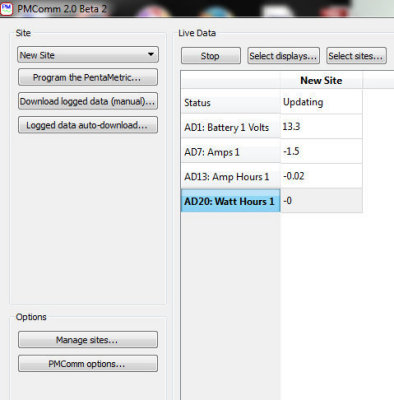 NOTE: I left the screen capture at full screen so the computer time (lower right) could be compared with iPad time, mainly for me to sort everything. If you want to see the Ah data on the screen shot simply click the image to make it larger.

From top To Bottom:
Battery Voltage 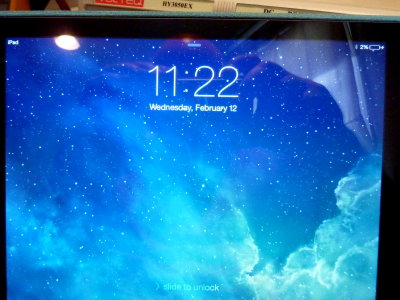 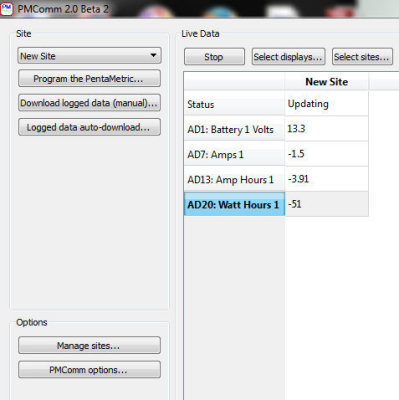 Data Point 76% SOC @ 1:58 PM = -3.91 Ah's
For this article I decided to use my Bogart Engineering Pentametric Analyzer to track the ampere hours and watt hours of energy consumption. Throughout the entire test the battery bank voltage remained at 13.3 - 13.4V.

The iPad was charged via a 400W Cobra inverter to mimic the way I see most of my customers charging iPads, via an inverter.

In order to get to 76% SOC the iPad and inverter inefficiencies consumed -3.91 Ah's or -51 watt hours from the battery bank. 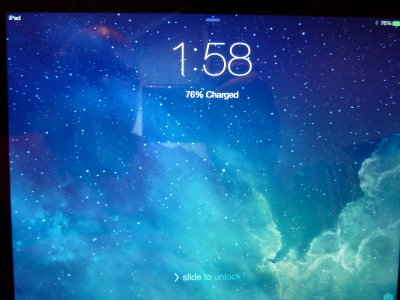 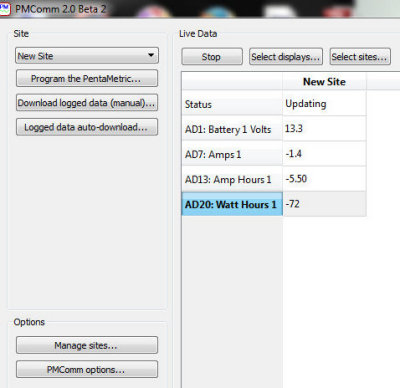 Here the iPad has approached 98% SOC and consumed 5.5 Ah's to get there. 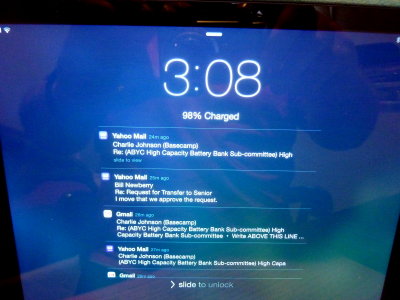 Keep in mind that most electronics makers are not using the full range of the internal Li batteries in order to get the most life out of them. Consumers hate short battery life in products where batteries are not easily replaced.

They are likely using somewhere between 60% and 80% of the actual mAh capacity but this is kept under wraps... If they used the full rated capacity it would take a lot more than 5.64Ah's to recharge the iPad Air... 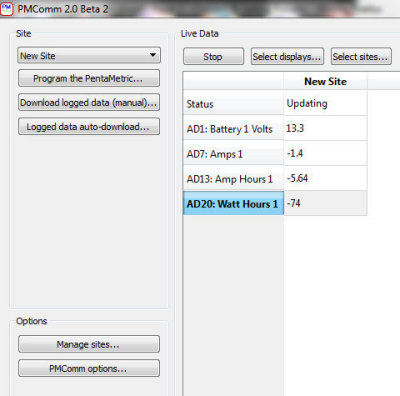 DISCLAIMER: It should be noted that my iPad Air does not discontinue charging when it says 100% SOC. It continued drawing 0.8-0.9A for approx 40 minutes beyond where it said "100%". Li batteries, in devices like this, stop charging when truly full. A 100% screen display on the iPad does not necessarily mean it is totally full or done consuming charging energy. After noticing this I discovered that this is a fairly well known issue. It makes sense because tracking Li SOC can be very difficult...

Just because your screen says 100% this does not mean it is full. When the charging icon disappears, then your iPad is fully charged.... 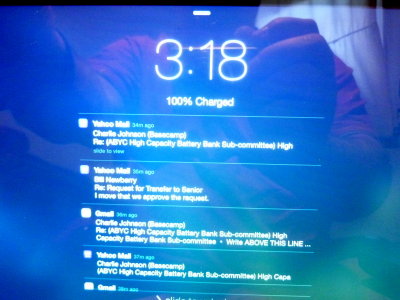 While the iPad is a very efficient product it consumes more energy to charge it than many boat owners would assume, especially when run through an inverter.

On a small boat with a 100Ah battery bank the iPad could use approx 11% +/- of your usable Ah capacity, when charged via a small inverter. This is of course if we assume the owner is practicing good battery management and only drawing the bank to 50% depth of discharge leaving him or her with 50 usable Ah's..

If using the iPad while charging it the current stays pretty steady at -1.5A when run through this inverter..

We often have three iPads on-board, plus phones and a laptop computer. The computer is an energy pig by comparison. When you add all these up you can easily break 20-30 Ah's per day if not careful. 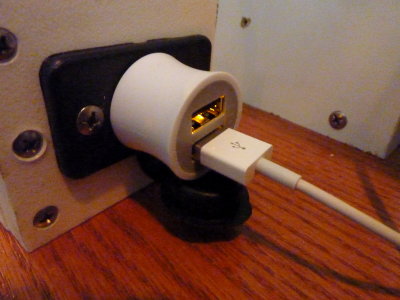 For this second part of the charging observations I chose to use a USB 12V adapter as opposed to an inverter.

This particular 12V USB adapter is has an output rating of 5V and 2.0A which is 0.4A less than the output of the Apple 120V adapter. All this means is that it will take a bit longer to charge.

This one is branded Rayovac and I grabbed it at Wal*Mart to simulate what most boaters would use... The standard Apple USB to lightning cable was used with it.

NOTE: This USB insert-charger is a venerable POS. I can literally burn one out in a weekend. USB insert-chargers are one of the highest failing devices I see on boats. Go figure that most I see are el-cheapo Chinese crap purchased at checkout or at a convenience store.. Many of these USB insert-chargers are not designed to meet Apple's high current charging standard so will charge very, very slowly and usually default to 1A or less.

If you want a high quality long life USB insert, that actually works, consider the SCOSCHE USBC242M. This model, and it's 10W predecessor, have proven to be the most reliable USB inserts I have come across. The SCOSCHE USBC242M can charge two iPad Air's simultaneously at virtually the same speed as your 120V Apple wall charger. Amazon Prime usually has them for $11.50.... 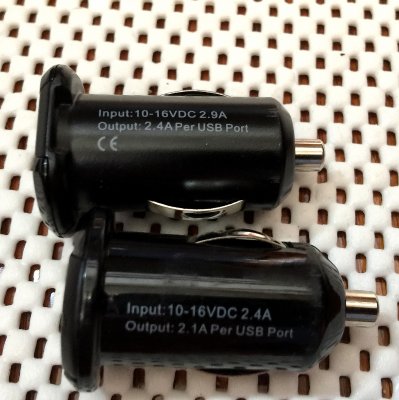 Not All USB Chargers Are Created Equal

With the influx of cheaply made Chinese point of sale USB chargers, I call them check out line chargers, these devices have become one of the most failure prone items I see used aboard boats.

The cheaply made check out line grade USB chargers tend to heat up and have an extremely high failure rate. Most of these USB chargers were designed for smaller smart phones not for charging iPads or tablets. When purchasing a USB charger be sure it's capable of at least 2.1A, or preferably, 2.4A per USB port. Anything less is simply inadequate for charging tablets.

The current iPads require 2.4A to charge, as Apple intended them to. Don't be fooled by products like the Blue Sea permanent mount dual USB socket charging ports. The current models only provide a total output, shared across both outlets, of 2.0A. Plug in two iPads and they begin to get very warm and the iPads will charge very, very slowly. Eventually they overheat and die. Blue Sea has a new 2.4A per port model coming out in the Spring of 2016.

Personally I prefer to avoid a permanent mount style as it limits you to USB charging only. If or when they fail, and they likely will, you are paying more, will need to physically re-wire the socket, and you lose the ability to use that socket for anything but USB charging.

Installation of the SCOSCHE is simple, just slide-it-in to any 12V charging socket.

By using a standard 12V socket you retain the dual use of it and when, not IF, a cheap USB insert fails you simply unplug it and slide a new one in. While I generally love Blue Sea products I am not a huge fan of the current model Blue Sea fixed mount USB outlets.
click on thumbnails for full image