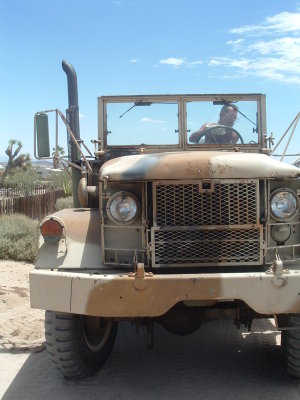 Scouting Mission
40 hours & 337 miles on the engine.
Today I take off to cross the desert on my way to the Colorado river. It's where I need to go to get a tag for this Mech Monster. It will be on dirt roads, and less, as much as possible.
On the way back I'll scout a way for us to take this winter when we leave the high desert for lower elevations.
First a run into town to top off the fuel tank, I expect to cover about 200 miles before I can fuel again. I spend the first part of the day weaving my way through the grid of dirt roads to the edge of development. There I catch a service road, following some buried gas lines, which leads me up a winding, and very soft, sand wash . . . no time to stop now . . . just keep it moving!
I almost top-out the pass when I intersect pavement and jump on it for a mile or so.
On the other side of the pass the service road straight-lines past the end of the mountains on a downhill grade cut by wash erosions coming from the side, some of these "cuts" were steep, deep, and sandy.. The road dropped into the valley and up the other side.
Once on the other side of the valley I find a rail-line that should be paralleling the gravel road that runs the length of the valley. After a few false starts I find the road and soon discover that it's been "washboarded" massively by high speed travel. I end up choosing the service road for the rail-line and only have to deal with going in & out of dry washes.
That evening I find a nice little pull-off just after crossing through a short pass with the rail-line.
0 comments leave a comment 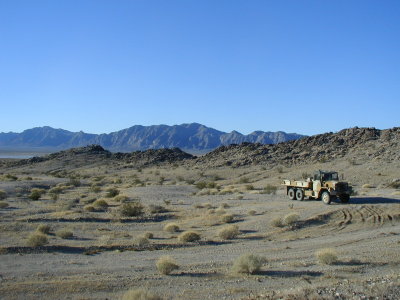 Last night's camp
Watched the sun rise on the far horizon off the passenger side.
Slept in the bed of the truck. I had built a wooden pallet that fit side to side in the bed and was about 3' wide. Something to keep me off the steel floor. A pad on top of that and a bag was enough for this trip.
0 comments leave a comment 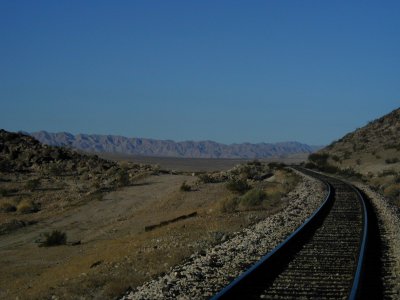 Rail-line
During the night a line of railcars rolled by a couple times, just some local freight . . . slowly . . . calmly rolling to it's destination.
0 comments leave a comment 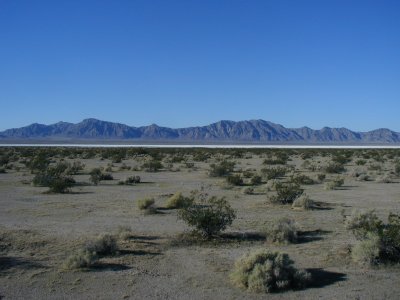 Salt Beds
South of me was the dry lake-bed, salty enough that they have evaporators along this part of the "shore".
0 comments leave a comment 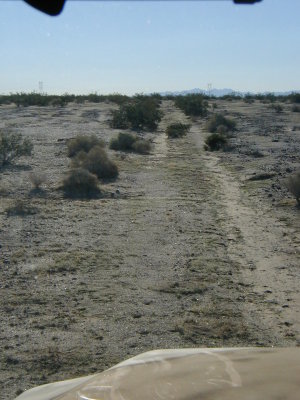 The "Road"
This track paralleled the rail-line, it looked good enough!
The less driven the track the smoother it is . . . there does tend to be wash-outs and such, but they're just "FUN" for the "Draggin' ".
Had a nice morning following this for an almost an hour before it faded out, then cut back to the service road running along the rail-line.
0 comments leave a comment 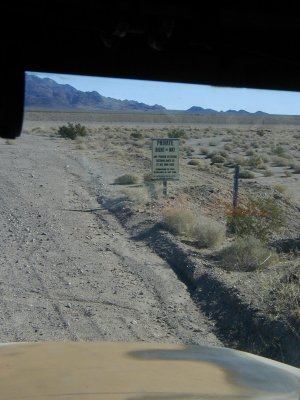 The Canal Road
The Rail-line eventually crossed pavement. I cut off, wanting to stay on this side, and picked up the service road for the aqueduct. It's a given that this will run back to the Colorado . . . same place I'm going.
I spent a bit of time w/ some "old school" paper maps and verify that this will put me north of the town, at the feet of the Whipple mountains. All I had to do was find a track south out of there that was not a wash. These are common quad & jeep routes . . . I think I might be too heavy to follow some of those paths.
0 comments leave a comment 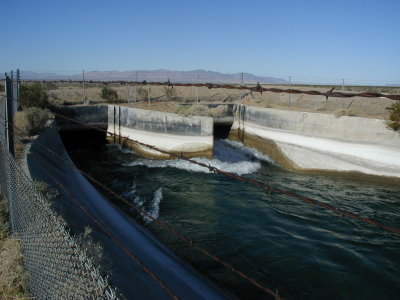 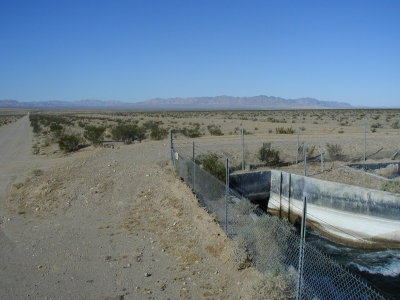 Disappearing into the Desert
From here you can see the mass of water drop below ground.
Somewhere out in the far distance it surfaces again . . . before entering a tunnel through the mountains.
0 comments leave a comment 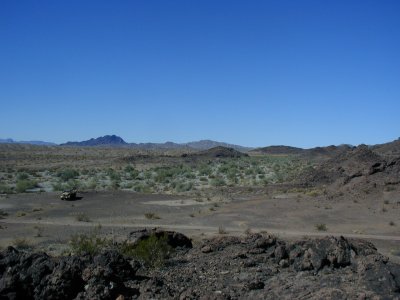 Afternoon park up
Sometime, hours after mid-day, I decided to park for a bit. I already knew that I was not hitting the tagging office today. No reason to do that whole "pull a number", wait for hours, . . . then they close. My plan of attack was to be there first thing in the morning, weave through any complications that might arise from trying to tag this mech monster, jump the pavement south down the river's direction, and find a dirt track again before the day was even old.
So that gave me room to track up into the mountains that I was edging. I found a small track that followed the ridge along a pretty major wash. Ran that till it ended at some mine site. This would be a good place to eat something, and scout around some. I parked on the edge of the wash, that you can see behind me, and set out to scout the area.
0 comments leave a comment 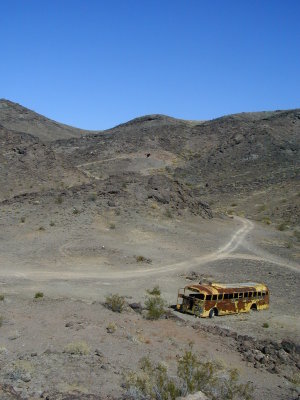 Waiting for the Bus
Near where I parked was this bus. Maybe it had been used as a place to stay while mining the hole in the distance, . . . hard to say at this point. It had suffered the fate that many things unable to move suffer in the desert . . . it had been turned into perforated metal by various caliber of projectiles.
0 comments leave a comment 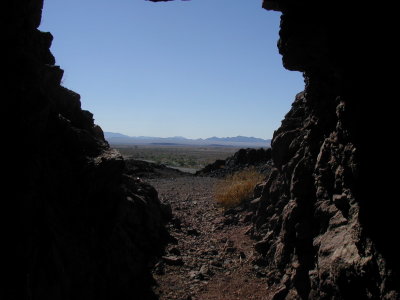 View from the mine
Looking out of the mine entrance, past the river, to the distant mountains.
0 comments leave a comment 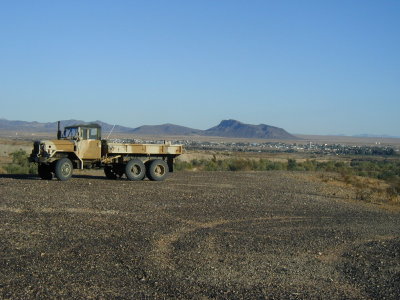 My camp outside of Parker
As the day got later I headed back to the main track I had been following. I ran this for several miles before it dropped me into a wash canyon. I carefully pushed on and found that it exited off to the side after a short distance. Back on the hard stuff I intersected the power-line road before to long. At this point I checked my paper copies and was ready to find a track south and out to the pavement. If I followed the power-line road I would end up too far north.
I picked what looked like a good track and urged the "little Draggin' " forward. This would probably be the one of the more challenging parts of today's travels.
The track I'm on was made by jeeps & quads, things with less than a 6' wheel base . . . and much lighter.
It followed the ridges mostly, every so often dropping down into a wash and up the other side. Most of these descents into the washes were from 90deg turns off a ridge, down into the wash and up again. My wheel base did not really fit the track lines. I would have my outside front wheel (often the passenger side) up on the berm, the inside front down in one of the ruts, and be turning down hill, steep down hill. It made for some pretty interesting moves.
It does seem that whomever has been using this track either has loads of trouble climbing up to these ridges from the wash, or . . . rooting up the whole climb is just part of the culture. Not once climbing into, or out of the washes, did I even slip a wheel.
This went smooth for awhile . . . then one of those "drops into the wash" did not come out the other side!
I run the wash downhill at a good speed, I've only been in soft sand w/ the Draggin' once before . . . and I'm nervous. If I get it sunk it will take some real work to get it out! I know that I've got crappy tires for this . . . and they're NOT EVEN AIRED DOWN!
After some time, which seemed WAY longer than it was, I see a track up out of the wash, . . . I take it! As soon as it climbs out of the wash it turns and heads back the way I came . . . Damn!
Now I, w/ no room to turn around, will have to back into the wash and come to a dead stop before starting forward again.
It works and I follow quad tracks all the way to pavement. Climbing over the berm, left by the mechs that clear the road after the it rains enough to make this wash run over the pavement, I feel something solid under the wheels, yeah!
A short run on the pavement finds me a place to pull off for the night overlooking the river town.
0 comments leave a comment