Capharnaum in the New Testament is given as the home of the apostles Peter, Andrew, James, John and Matthew. In Matthew's gospel the town is given as the adult home of Jesus. The Gospel of Luke says Jesus taught in the synagogue in Capharnaum on the Sabbath days. In Capharnaum (Greek its Capharnaum, English its Capernaum) Jesus healed a man who had the spirit of an unclean devil and healed a fever in Simon Peter's mother-in-law. According to Matthew it is also the place where a Roman Centurion asked Jesus to heal his servant. The synagogue that Jesus taught in has been found beneath the remains of a later synagogue 4th Century synagogue. Capharnaum was a settlement on the shore of the Sea of Galilee. The site is a ruin today, but was inhabited from 150 BC to about AD 750.

The remains of Peter's house in Capharnaum can be seen today; including the inner room which was used as the very first Christian Church. Jesus performed many miracles in Capharnaum. The foundations of Peter's house and the 4th Century Synagogue built on top of the original Capharnaum foundation are seen in these Pictures. Capharnaum was a small village but large enough to have a small synagogue. In Jesus' time Capharnaum was a poor fishing village, which extended along the north lake shore for a distance of about 1,600 feet. The Jewish inhabitants could not afford their own synagogue but a Roman Centurion, who held the Jewish people in high regard, built one for them.

The modern Saint Peter's Memorial Church was built over the traditional House of Saint Peter by the Franciscan Custody of the Holy Land to protect the archaeological remains of the Insula Sacra, and to make the ruins more accessible to the visitors. The inside of the memorial is used for religious services.

This is St. Peter's house in Capharnaum. It was rediscovered in 1968 under the foundations of the octagonal church some 30 meters south of the synagogue. To quote Matthew: Jesus said to them: But who do you say I am? Simon Peter answered and said: You are Christ, the Son of the living God. And Jesus answering, said to him: Blessed are you, Simon son of Jona, because flesh and blood have not revealed this to you, but my Father who is in heaven. And I say to you: That you are Peter; and upon this rock I will build my church, and the gates of hell shall not prevail against it.

The the foundations of St. Peters house are chest high and still stand. It is the inter rock circle. The rocks still stand, go figure! They looked pretty solid to me.

Capharnaum is given as the home of Peter. Jesus spent 80% of his active ministry in Capharnaum and lived most of the time in this house. Here we see the back of the house and the foundations of the Octagonal church that surrounded the house. Historians were describing Peter's house as early as the second century. Those descriptions are one of the main sources that identified this as Peter' house. 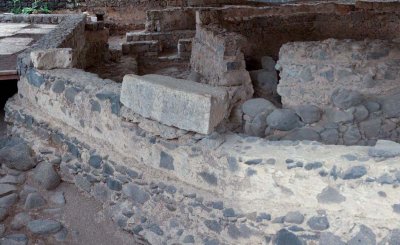 Capharnaum is the home of Peter. Jesus spent 80% of his active ministry in Capharnaum and lived most of the time in this house. It must have been a busy front door.

The house of St. Peter, often mentioned by the Synoptic Gospels in relation to the activity of Jesus in Capharnaum, and recorded later on by pilgrims, was rediscovered in 1968 under the foundations of the octagonal church some 30 meters south of the synagogue. The history of that house where Jesus lived, can be summarized as follows:
1. the house was built in the Late Hellenistic period;
2. in the late first century A.D. it was changed into a "domus-ecclesia", i. e. became a house for religious gatherings;
3. in the fourth century A.D. the same "domus-ecclesia" was enlarged and was set apart from the rest of the town through an imposing enclosure wall;
4. in the second half of the fifth century A.D. an octagonal church was built upon the house of St. Peter and remained in use until the seventh century A.D.;
5. the identification of the house of St. Peter is based on the combination of archaeological data and literary sources which run side by side in a wonderful way. 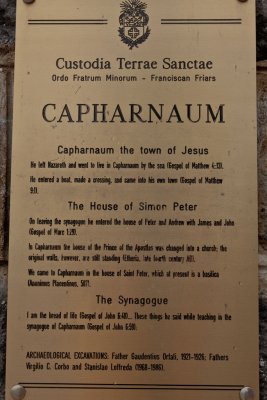 The sign at the front gate as you enter Capharnaum. In the Greek manuscripts of the Gospels two spellings occur, i.e. Capharnaum (Kafarnaouvm) and Capernaum (Kapernaouvm). The first transcription "Capharnaum", closely following the Hebrew pronunciation and adopted also by Josephus Flavius, is the right one, while the spelling "Capernaum" is rather an idiom of the district of Antioch.
0 comments leave a comment 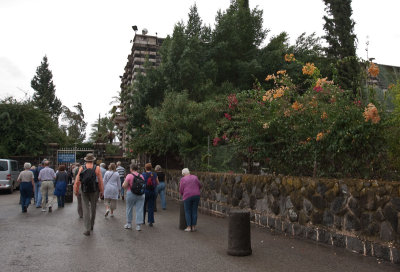 The front gate of Capharnaum.
0 comments leave a comment 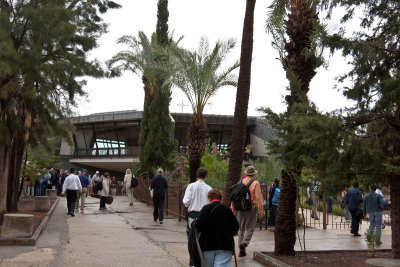 The St. Peter Memorial Church. The new Memorial upon the traditional House of St. Peter was built by the Franciscan Custody of the Holy Land in order to shelter the archaeological remains of the Insula Sacra(the Insula Sacra underwent major changes in the late fourth century A.D. First of all Insula Sacra was set apart from the rest of the village through the construction of an impressive enclosure wall encompassing a perimeter of 112.25 m around the house of Peter. The area enclosed by the wall was roughly square in ground plan and was entered from two doorways respectively near the SW and NW corners of the enclosure wall.). The inside of the memorial church is primarily reserved for religious services. We were allowed a 20 minutes visit inside the memorial church. It is the first time Kevin has gotten a group inside.
0 comments leave a comment 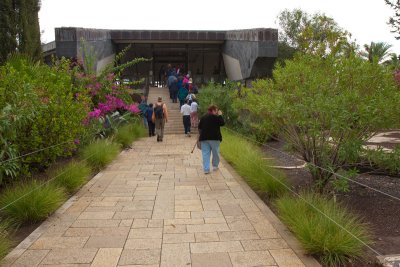 The front door to the St.Peter Memorial Church.
0 comments leave a comment 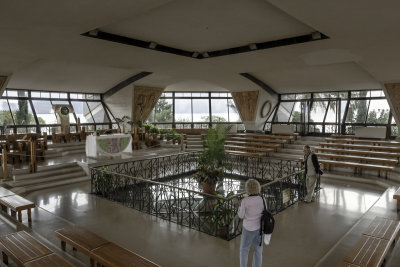 The Interior of St.Peter Memorial Church. Out the windows in the distance is Syria and the Golan Heights. Below the Skylight in the center of the photograph is the foundation of St. Peter's house. Jesus spent 80% of his time in this house. I did not know that the remains of St. Peter's house existed. It remains my biggest surprise on this trip.
0 comments leave a comment 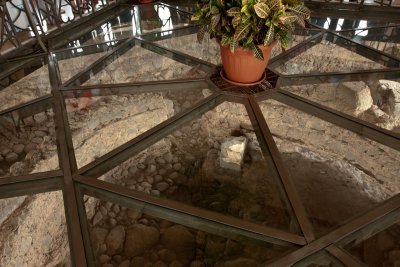 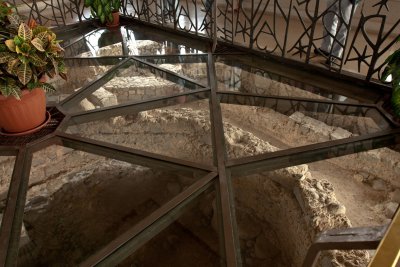 Looking down at the eastern wall of St.Peter's house.
0 comments leave a comment 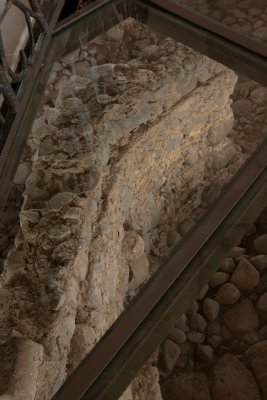 Looking down at the western wall of St.Peter's house.
0 comments leave a comment 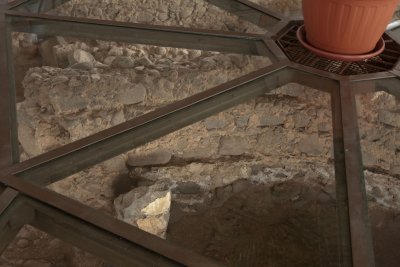 Another look at the front door of St.Peter's house.
0 comments leave a comment