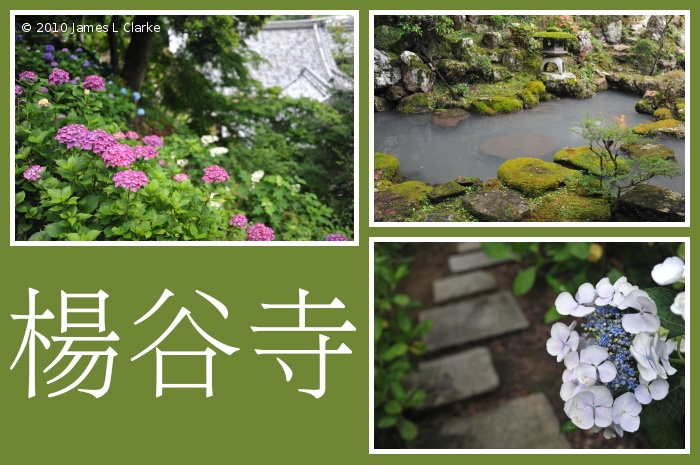 Youkoku-ji (aka "Yanagidani Kannon")
This is another of Nagaokakyo's beautiful temples, but this place is not so well know as Komyo-ji. Youkoku-ji (aka "Yanagidani Kannon") is set right up in the mountains about 5km to the south west of the city centre, it's considered to be the best place to see Hydrangeas in Nagaokakyo during the flowering season. During the Hydrangea season in 2010 Ritsuko, Emi and I caught the shuttle bus there from Nagaokakyo station on a Sunday afternoon. Not only were the Hydrangeas fantastic, but also we found it was a very beautiful temple complex in someways similar to Komyo-ji, but smaller. I especially liked sitting beside the shady carp pond (top right) at the back of the complex.
Access to Youkoku is easy during the Hydrangea (late June) and Maple (late November) Festivals, as there are shuttle buses running from JR Nagaokakyo and Hankyu Nagaoka Tenjin Stations. However at other times of the year private transport, taxi or hiking is necessary. Unless you are a very strong cyclist I wouldn't recommend cycling up there as the road is very steep and you'll probably be pushing the bike most of the way, but the return trip might be fun! It's quite easy to follow the road to get there, just keep following Azalea-dori in a westerly direction from Hankyu Nagaoka Tenjin Station passing the Nagaoka Tenmangu shrine and then turn left at the traffic lights on to Yanagidani-michi which will take you into the mountains and eventually to the temple. There are some Romanised signs marked with "Yanagidani Kannon" along the way.
Click here to view more photos from this outing.
25/03/2013 Note: Hi all it's been a long time since I've posted to pbase, more than eight months. I've been extremely busy with a few projects including helping my wife write and publish her latest book called “It was Him”. This new book tells our story of our first 3 years in Japan how God's hand guided and provided for us. It's available via Blurb, click here to check it out. I've got a lot planned for this Mission Japan PBLOG, so stay tuned. Additionally I'm working on a book project of my own which will also be published to our blurb site when it's ready. Plus for my latest photos check out my smugmug site. - James
9 comments leave a comment 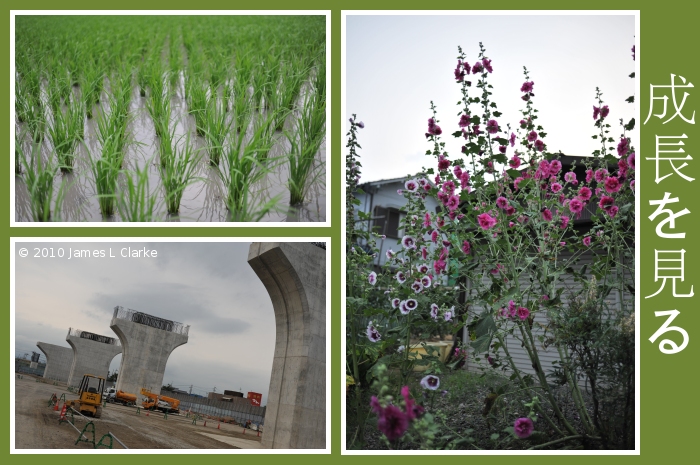 Observing the growth
Well, summer in Japan is when everything "grows like topsy"*(1), while the rest of the year the growth seems slow. So over the summer of 2010, since my D700 was still quite new then, at every opportunity I went out to photograph the growth of things. The rice field near by my house was particularly interesting as every week it was different. Then there were the summer flowers which seemed to spring up everywhere. Another thing “growing” was the new expressway, and actually it still is.
Observing the growth can also be said of what we do as God's witnesses. Since only God makes things grow. Sure we might sow seeds and add a bit of water, so also in our time in Japan, we observed amazing growth in people's spiritual lives as they've trusted Jesus. Ritsuko is writing down many of the observations in a new book called "It was Him" and from time to time I'll post observations about what God is doing here to this PBLOG.
(1) A saying a manager of mine in when I worked in Australia would say.
Note 23/07/2012: It's been over six months since I last posted to PBase and a lot has happened. I've been all the way up North to Sapporo for the Yuki Matsuri (Snow Festival) and even further South all the way to Singapore and Johor Bahru to visit some Japanese believers there. We were kept busy in February with a couple of visitors from Perth. I was struck down with a dangerous foot infection in late April, it pretty much immobilised me for the Golden Week holiday. While I'm better now, I'm still treating the foot with ointment everyday and I'm not planning to start my running again until well into the autumn. I've lost a little of the fitness I once had and it's slowed me down a little, but I'm determined to get completely well again. At the same time I feel the experience has humbled me and helped me to feel empathy with other peoples suffering. A lot of positive lessons learned out of it. One day I'll write more about it... When? I not sure yet. - James.
8 comments leave a comment 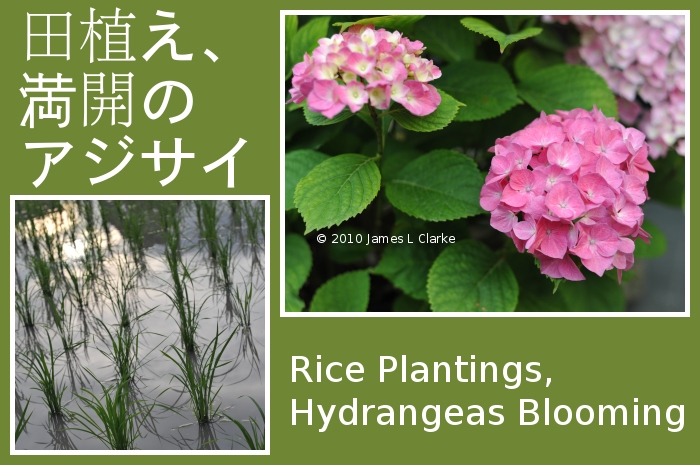 Rice Plantings, Hydrangeas Blooming
It was late on a Monday afternoon after I had finished teaching, and there was a break in the rain (that time of year is the rainy season around here). So, I decided to go out and take some photos. The first place I headed to was a rice field, which is about 5mins walk away from were I live. The photo at the bottom left is of some rice seedlings, they'd been planted not long before. After that I took a walk around the neighbourhood looking for Hydrangeas. Well, I found a few here and there, but they weren't at their best. As I was about to give up, it was then I found these beautiful hot pink ones.
On a side note these two photos made it in to my "Through the Year" gallery, where I show four photos for each month. I've been working on that gallery for a good while now the photos used were taken over a period of three years. Actually I had planned to finish that gallery in October this year, so I could produce a calendar from it and get them out well before New Year. However I got too busy and now it's complete on New Years Eve, when I had no intention of it happening that way!
Note 31/12/2011: The build up to Christmas was very full on for us as we had our final presentations for our English classes. Then we had a church Christmas party followed, by our Christmas service. The day after Christmas we went on a two day trip to Matsuyama and surrounds, which all came together just a few days before Christmas (long story). After the trip was a our wedding anniversary. Finally having a bit of rest over the last couple of days! Wishing all my PBase friends a Happy New Year, I hope 2012 is a good one for you all.
12 comments leave a comment 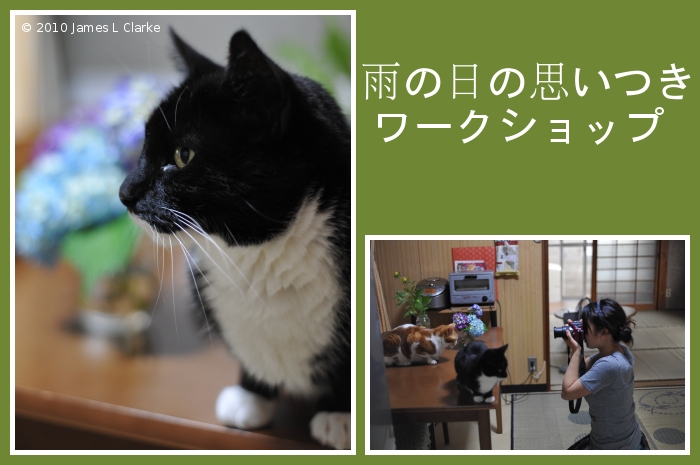 A rainy day and an impromptu photographic workshop
It was something that came about because of a little miracle: On the 10th of June we were given a bunch of cut Hydrangeas which contained three different colours of flowers. By Sunday morning they were all looking pretty bad. Ritsuko though she could revive the light blue ones so she cut away most of the leaves and put them in icy water. However the blue/purple and red/purple ones she didn't think stood a chance so she through them in the bin (trash can). Well, then we had our church service and by the end of it the light blues were looking better than ever, so we retrieved the others and gave them the same treatment and pretty soon they were good again.
I didn't know how long they'd stay good for so I decided I was going document them that afternoon. Now Emi (one of the young ladies in the church) overheard my plans, and she asked me how to take good flower photos. So, I said why don't you come back after lunch with your camera and I can teach you. After lunch Emi came back with her Panasonic LUMIX G1, and together with a bit of modelling from Linus, Lucy (the cats) and Ritsuko we had a little photographic workshop.
Well, that was the first of four photographic workshops we've had now, each time gaining a little more popularity. I'm planning to BLOG about the others in future...
Here is a link to some more photos from that workshop.
P.S. The flowers stayed good for another week!
11 comments leave a comment 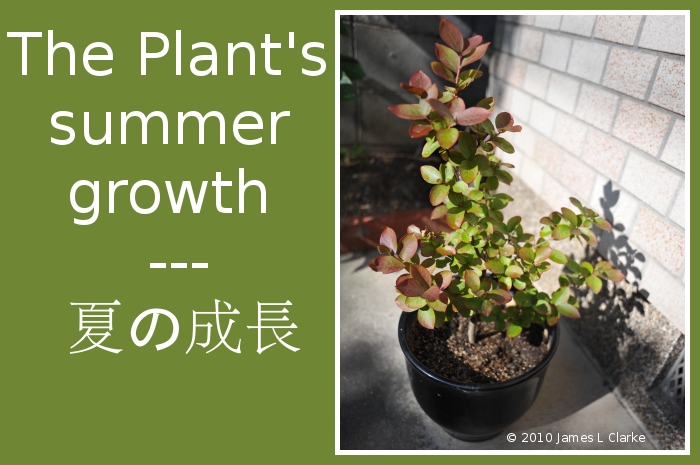 The Plant's summer growth
The little plant which Bob bought for his sermon illustration really started to grow come the summer of 2010. Seeing it dormant over the winter, come back to life in the spring, and put on a big growth spurt in the summer, was a metaphor for the our journey to Japan. The hard beginning, then the little signs of growth and then better times. Just like with this plant however the autumn (fall) comes and things die out again, so we have to be prepared for that.
The plant also helps me to think about a verse: "I have planted, Apollos watered; but God gave the increase. So then neither is he that planteth any thing, neither he that watereth; but God that giveth the increase." 1 Corinthians 3:6-7 (King James Bible)
Indeed we water, fertilise (feed), and prune (correct), but only God makes the growth. When you have you eyes fixed on God everything becomes a spiritual lesson even a little plant.
Note 29/11/2011: Had a lot of things happen up here recently, both good and bad. With the blessings also come persecutions. Hopefully I'll get time for a few more PBLOGs and updates to other galleries over the next week or so, before the Christmas rush hits me.
7 comments leave a comment