Please note, this gallery has been Archived.

As with previous years, my PaD is truly a "Photo A Day". All photos shown in this gallery were taken on the specified day. On rare occasions, they may not be posted until a later date, however. Since the entire universe has not been WIFI'd AND since I don't carry my Mac Book Pro with me everywhere I go (a shame, I know), sometimes I do not upload my daily images until later. 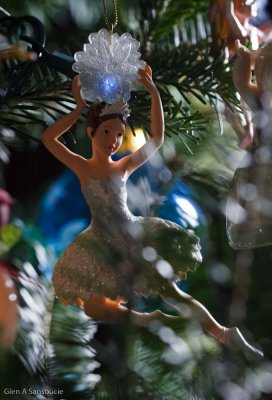 Day 354 - Tree Dancing
We finally have ornaments on the tree. It has been 'falling' now for a week ;-) I am recovering from a 'thing' and wasn't about to really do much of anything today. The last thing I was supposed to do was sit in a chair all day and that is pretty much what I did. I got caught up on bills and Xmas shopping, then had to do a little research for work. Strobist info: Canon 580EX2 camera right and slightly behind the ballerina ornament, 1/8 Power, fired with Cybersyncs.
0 comments leave a comment 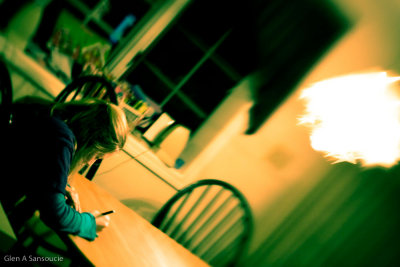 Day 353 - Meteor
I was messing around with my Lensbabies 3G and the Star Aperture and the Xmas tree. While walking (hobbling) back to the computer, I decided to try capturing my daughter writing something (I believe it is a scavenger hunt for her brother). Our kitchen light looks a lot like some kind of meteor from this angle.
1 comment leave a comment 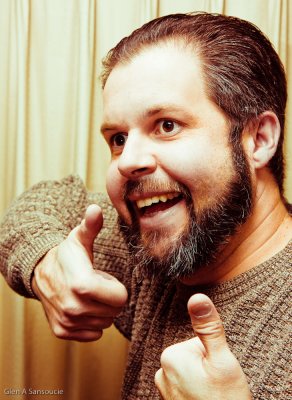 Day 352 - Heyyyy
When I saw what the FGR Challenge was this morning, I knew I had the cheese to pull this off. I had this kind of shot in mind, the "Fonzi theme" was something I came up with while shooting (I can be so crafty like that). We just got back from the Polar Express. It is about 1 1/2 hours north of here. For some reason, every time we go, the wind chill is in the negative teens. We've had this warmer than normal winter so far, then Bam! out of no where comes this arctic cold the day we do this. I took my 70's shots before we left, but there wasn't enough time to process them.
0 comments leave a comment 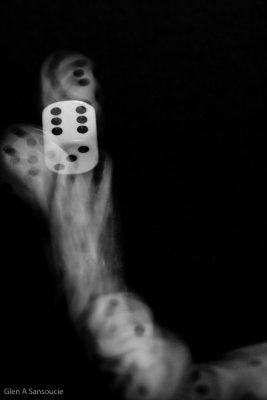 Day 350 - Take a chance
Interesting FGR Challenge today, Dice. We have all kinds of odd dies floating around somewhere, I bought a bunch for my kids last camping season to play with. They are most likely still in our camper. I am doing nothing special here, no flash, camera on tripod with a slightly slow shutter. The real trick is trying to time and aim the dice to the 2 second timer and the small field of view for the 100mm Macro. I stole the dice from our Yahtzee game. I'd better go put them back, otherwise I risk getting in deep trouble.
2 comments leave a comment 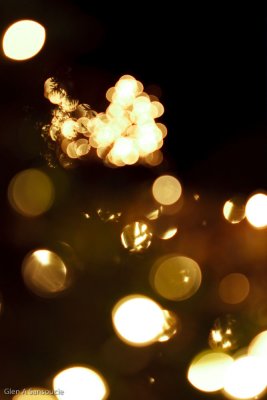 Day 349 - Xmas Lights
Here I was upset that we didn't have anything on our tree and wouldn't be able to take a photo of anything Xmasy. I forgot about our front bushes. I've got my camera on the tripod to take this Out Of Focus (OOF) shot of the lights when I realized two things:
1) My Cullman Tripod Head is shot, it no longer locks. I tried to save a few $$ and paid the price.
2) The EF 100mm f/2.8 Macro has some flare. Though you can't see it, in the center of the photo is an odd flare. It was much more pronounced in some of the other shots that I canned.
Either way, I got the shot I was looking for and realized that I can break out my Lensbabies 3G with a custom Aperture for a shot perhaps tomorrow.
1 comment leave a comment 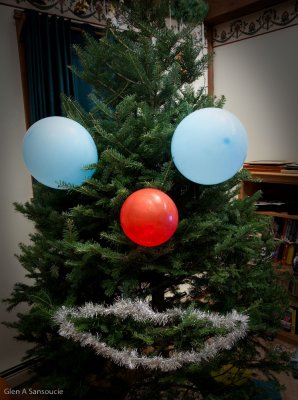 Day 348 - Holiday Clown
I searched around today and couldn't find a Red Clown nose for today's FGR Challenge: Peace, Love and Red Noses. This was something that I came up with on short notice. There all all these balloons in our family room from Birthday Parties (2 weeks ago). We were out and about this evening so we've not started decorating the tree, we have another full evening tomorrow so this is the amount of decorations for the next few days (I will see if the kids notice tomorrow). After this, I get to investigate yet another problem with our Washing Machine. I believe the Tub Bearings are shot. It's squeeking and making a hell of a racket. Apparently you can't just replace the bearings, you have to replace the entire back of the tub. There goes my Thursday (provided I can find a rear tub in stock at a reasonable price).
0 comments leave a comment 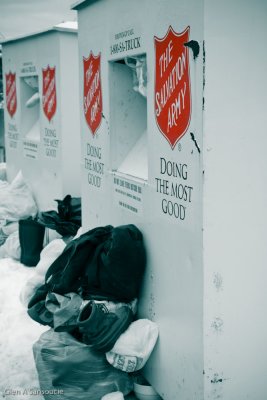 Day 347 - Too much giving
You can tell it's the holiday season by how many bags of stuff are sitting outside of the Salvation Army bins at the Transfer Station. For today's FGR Challenge, I bring my camera everywhere, I was able to show that I literally bring my camera everywhere. Sunday morning is my Trash day, the transfer station is just around the corner, but I normally bring my gear with me. Usually I take a bit of an extended ride home and find something to shoot, today I decided to find things to shoot at the Transfer Station itself. I had a few other shots that I'd planned on going with until I saw the Salvation Army bins at the gate on my way out. I pulled out and around and parked the Tahoe to walk back and grab a few shots of the bins. After Xmas, these bins will be full again and there will be bag after bag of stuff beside them. I did the selective coloring in LR again, the trick is to paint the entire photo with negative saturation, then selectively remove (erase) the selection of the areas that you want the color to remain. It helped that this is red on white so I could afford to be a little sloppy and it wouldn't matter. It gets tough when you have two colors that border, then you have to be very careful.
1 comment leave a comment 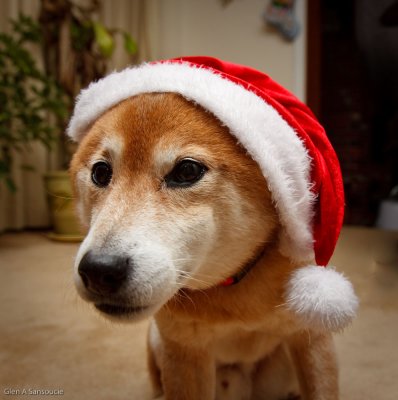 Day 346 - Xmas Spirit
Fox was simply all agog about posing for today's FGR Challenge The Santa Hat Project. I had a much easier time of convincing him to pose with this festive hat on than I did of my wife. It took a few tries, Fox shook the hat off at first. He's not one to really sit around and put up with this crap, I'm pretty impressed. I might have to Photoshop in a red nose ;-)
1 comment leave a comment 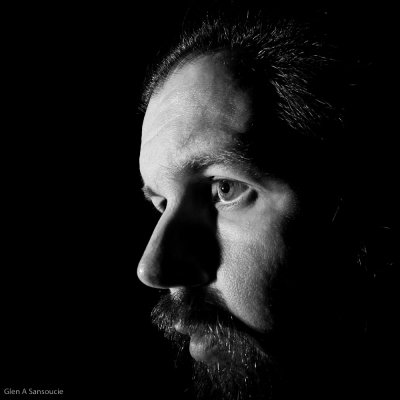 Day 345 - Square Dude
I sort of had the day off, I spent most of my morning and most of last evening working though. I did get to do a lot of running around, finally getting to start Xmas shopping. OK, technically I started a while back, I've been collecting stuff for a little bit, but not getting the big things. I've gotten a few of the big things now.
So the FGR Challenge today is Hip to Be Square, a Square Format (Cropped) portrait. I didn't break out any my TLRs, this is just a simple square crop. For some odd reason, I decided to use the UWA, so I am a little out of proportion (at least the nose is). I had a slightly different composition in mind, but went with this approach. The background was just too busy, so I lowered the flash power and used a foamie snoot (just a sheet of black foam wrapped around the flash head). The 580EX-2 is camera left at 1/32 power, about 3' away.
0 comments leave a comment 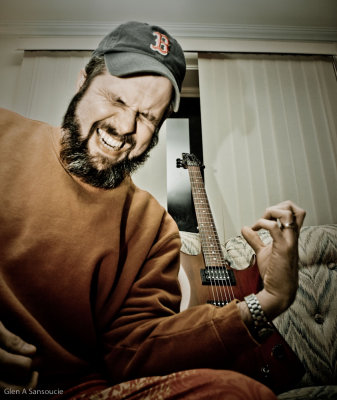 Day 344 - Faces by Night Ranger
Nope, this isn't an ad for constipation, it's for today's FGR Challenge, Air Guitar. It's a late entry, I had a busy day, took work home with me. Yes, that is my Washburn DD-60 behind me. A closer look at it would reveal an obsessive amount of dust, I fear I spend more time playing air guitar than it. In this photo, I am obviously playing something by Night Ranger, either "Eddie's Coming Out Tonight" or most likely "Faces". Should someone ever steal my iPod or iPhone and take a look at music collection, they'd go to great lengths to give it back to me ;-)
0 comments leave a comment 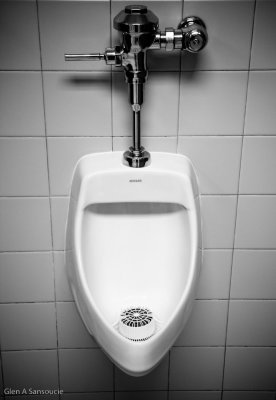 Day 343 - Patiently I wait, but not long
With a big storm happening in the Northeast today and the "Six Word Story" FGR challenge on the docket, one would think it was a match made in heaven. I actually drove into work today, it has been some 5 months since I've driven a 4-wheeled vehicle into work. I threw in my tripod and camera bag (not that I don't usually do this on the bike). Today's story, however, was more like "My Canon is NOT going outside". That isn't completely true, I was so busy at work that I never really got to have a chance to go outside (but you wouldn't have known that). On my way out of the building, I noticed that they'd just cleaned the rest rooms and there was a photo op of maximum proportions! I took the chance. I can only imagine the story I would have to come up with had someone walked in on me.
1 comment leave a comment 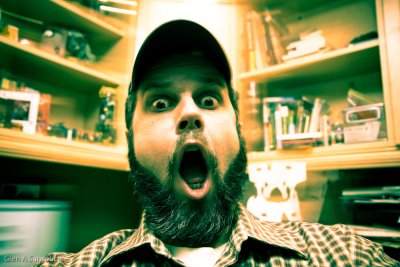 Day 342 - You Spin Me
In keeping with Today's FGR Theme, I am spinning around, trying not to get sick. Dragging the shutter too long created an extremely "un-spin-like" effect. Not to mention the fact that it really got me dizzy. This is most likely how I will look tomorrow morning when I wake up and find that I am unable to ride into work due to weather. It will be the first weather-related disruption to my motorcycle commute since March. My first non-ride into work since July when I sprained my ankle. I am Sooo not ready for a four wheel commute.
0 comments leave a comment