Breland has retired and we will be able to travel together more often. We've bought a fifth wheel and huge red truck, now known as Go Home II and the Big Red Blind, to travel in. We've traveled through many states and even through several Canadian provinces and a territory on our way to Alaska.

The Yukon!
Were in Watson Lake tonight, the site of the famous Signpost Forest. There are over 10000 signs placed there, starting with the one first placed there during the construction of the Alaskan Highway. Our drive today was a fairly short one, just over 200 miles. We drove along beautiful Muncho Lake and past Laird Hot Springs. There were many buffalo along the road, along with a few moose and caribou. The wild and beautiful rivers are milky greens and turquoise.
The Alaskan Highway has been a fairly smooth two lane road for almost 600 miles now. When we entered the Yukon it was a little rougher, but still very driveable with Go Home II following behind.
Our neighbors tonight are from Baton Rouge, Louisiana. This is their first time to make this drive also. Weve met couples who have been traveling to Alaska every summer for more than twenty years. Almost everyone weve met has been retired. Its a shame, this would be a marvelous journey for the young but few have time until after retirement.
The conveyances are so varied! Theres everything from vans to popups to trailers, fifth wheelers, Class Cs and Class As. There are times I wish our camper were a bit shorter so that we could fit into certain spaces and other times that Im really grateful for the space and storage. Our camera equipment alone takes a lot of room.
31 comments leave a comment 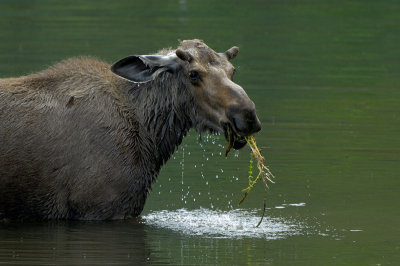 Toad River, British Columbia
June 21, 2007
Were spending the summer solstice at Toad River. We drove over the northern Rockies today. The scenery was wonderful. We saw a herd of caribou and many flocks of stone sheep, a variety of sheep that lives only in a small area of northern British Columbia. Our camper is parked next to the Toad River. Four moose are in the river right behind us. Earlier today one of our neighbors watched a grizzly stalk a moose calf. Fortunately mom came to the rescue.
This is a campground I would definitely want to spend a few days. We're surrounded on three sides by mountains with the river on the other. In this remote spot there's cable TV and even limited internet access. That and with moose and grizzlies in the back yard...
7 comments leave a comment 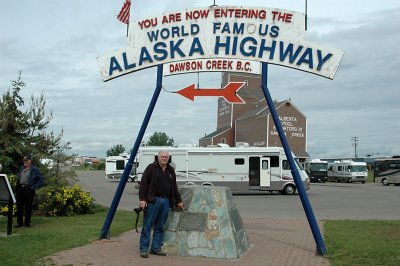 Mile 1, Alaskan Highway
The road was described as having gently rolling hills. Someone forgot to tell us about the stretches with an 8% grade. Good thing Brelands getting really good at handling that big rig on steep hills. Now, if only our cell phones worked and we had internet access regularly!
8 comments leave a comment 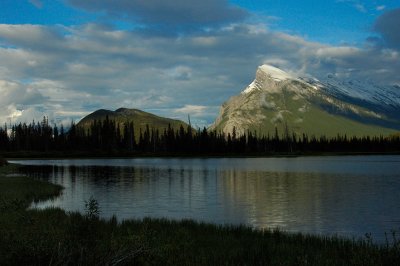 Banff National Park
We woke up this morning in the campground at Jasper Provincial Park surrounded by elk. Its still calving season and we were warned to be cautious in walking around the park as the elk cows were pretty aggressive right now. This campground is a great place to stay. We have a spot as large as most suburban lots with free firewood and 30 amp electricity for a very low price. We were right in the heart of Jasper National Park with incredible scenery all around.
No grizzlies today. We saw a pair of black bear, timber wolves and a marmot.
11 comments leave a comment 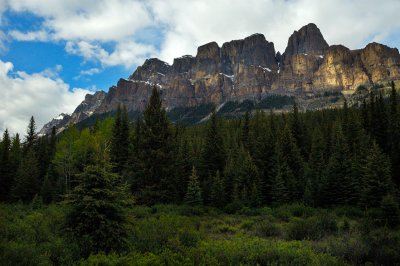 Castle Mountain, Banff
We spent two nights in Banff. I could have spent a month near here. The scenery is beyond belief. Every turn in the road is another beautiful vista.
23 comments leave a comment 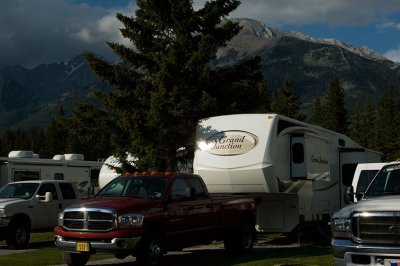 Saturday, June 16, 2007
The border crossing was a breeze. We were asked five questions 1) Where are you from? 2) Where are you going? 3) How long will you be in Canada? 4) Do you have any weapons? 5) Do you have any alcohol or tobacco products? We were on our way after only a moment or two. One of last nights neighbors was not quite as lucky. At least they only had to go in and fill our paperwork and answer additional questions before they were allowed to move on.
We stopped at the Head Smashed In Buffalo Jump and toured the displays. I was fascinated with this site. I remembered an old cowboy movie and a painting that showed this type of hunting and both left me wanting to know more. The artwork alone made it worth stopping.
We then pushed on through Calgary (more construction traffic) and are spending the night in Canmore, right outside of Banff. The campground is just a campground and the spaces are narrow but the views are totally amazing. Soaring mountain peaks surround us and were next to a sparkling little river. Four of the campers that were with us in Shelby last night are here and we spent a bit of time together until a major storm chased everyone inside. Im typing now on battery power because the town lost power after one of the lightning strikes. I hope we get power again soon so that I can post tonight.
4 comments leave a comment

Friday, June 15, 2007
No photos today. We drove our eleven and a half ton 500 miles across Montana, stopping only for an occasional rest stop. We usually do no more than 300 miles a day, because we really have no timeline or schedule but the road is wide and smooth and flat and the rolling hills and grasslands didnt vary much so we pushed on to Shelby, Montana. We originally planned to stop a bit earlier but the roads in the area were undergoing construction, the first weve seen in almost 3000 miles of driving. Were now only 34 miles from the Canadian border. just down the highway from where we plan to cross in the morning. The promised wifi doesnt work and that is very frustrating.
This entire campground is filled with people on their way to Alaska. Theres lots of talk about the best routes to take and those whove made the trip in RVs before have many stories to tell.
0 comments leave a comment 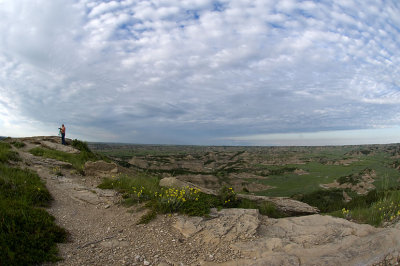 Final Day in Medora
Our final day in Medora. This pause in our journey has been very worthwhile. The small town of Medora is a fascinating little place and has several small shops and many activities for the tourists passing through. We stayed at the local commercial campground which had all the necessities, friendly people, and even a small country band every night. The town has a public campground on the river that offers all hookups and even has wireless. This campground is right next to the Little Missouri River and has wide shady spaces. I think well try that one if we come through again.
We made one final drive around the loop through the park. This time we hiked around the area where a large seam of coal burned for almost 25 years. They say that the glow from the fire lit up the night for miles and that locals would go there to roast marshmallows. Now the area is covered with trees and prairie grass and flowers and is a beautiful spot. I saw many lazuli buntings, a bird Ive wanted to see for a long time.
A fisheye image from one of the overlooks.
1 comment leave a comment 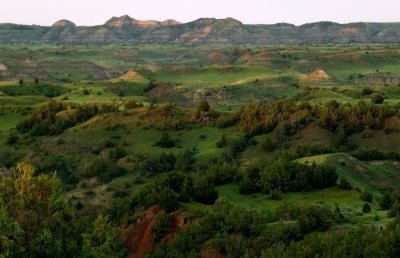 North Dakota Badlands
We woke this morning in Fargo, North Dakota to hot, dry winds. A coyote ran across our campsite when I opened the door. We began our drive west very early with a plan to arrive at our destination early. Not far out of the city we saw an enormous moose in a small pond right off the freeway.
Much of the drive was through heavy thunderstorms, which slowed us down considerably. We arrived at Medora, ND two hours later than originally planned. After a quick meal we drove to the South Unit of the Teddy Roosevelt National Park. It is incredibly beautiful and filled with animals. Go Home growled at the prairie dogs, buffalo, wild horses, elk and deer along the way.
We plan to spend a couple of days here before heading on.
17 comments leave a comment

Miles of Corn
I'm trying to respond to everyone tonight and may not have time to process any photos. Instead I've posted a map of the states for the grandchildren so that they can see where we've traveled through on this trip.
Last night we camped at Stoney Creek RV Park in Osseo, Wisconsin. I missed the kids so much! This is definitely a campground to visit with a family. There's so much to do. There's a skateboard area, volleyball nets, miniature golf, a huge playground and a pool and water play area that was amazing. Despite all of this, we had a beautiful large quiet treed campsite, perfectly set up for a nice outdoor meal. I've marked this as a campground I'd like to visit again.
After driving through many, many miles of cornfields we're in North Dakota tonight. Tomorrow we'll spend a couple of days at the Theodore Roosevelt National Park before heading on to Montana and then Canada.
8 comments leave a comment 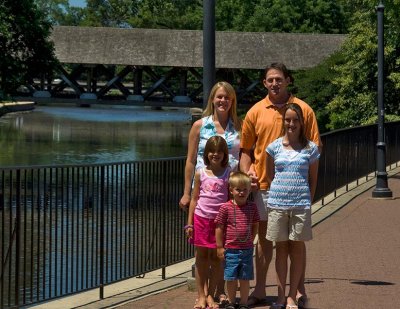 Naperville, Illinois
I woke up early this morning and staked out the mulberry tree next to the camper. In less that an hour it was visited by baltimore orioles, hooded orioles, a scarlet tanager and his mate, grey catbirds, cedar waxwings, and many other types of birds.
Later we visited downtown Naperville with my son and his family. I can certainly understand why the city has the ranking as the Number 2 of Money magazine's 100 Best Places to Live. The four miles of brick pathways that follow the river through the city are lined with shops and well-kept older homes. The downtown has a vacation air. I love the greenspaces in this county.
Phil took us to his favorite restaurant for brunch and then we walked though the streets and visited a restored area of the city. It was a wonderful way to spend the days with kids.
8 comments leave a comment 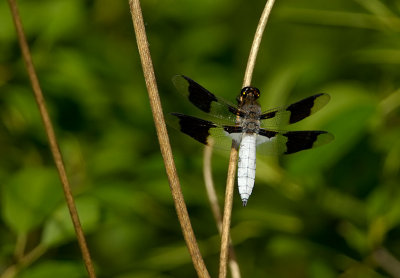 A Forest Preserve in a City
We're spending the weekend in a forest preserve in the greater metropolitan area of Chicago. My son lives in nearby Naperville and we had a wonderful time visiting with him and his family. There were several types of dragonflies that were new to me and we were parked right next to a mulberry tree that had a wide variety of visiting birds. We won't have electricity or an internet connection tonight so I may not be able to process or post for a day or two.
Lloyd and Sandy Spitalnik identified this as the male Common Whitetail dragonfly.
4 comments leave a comment