Breland has retired and we will be able to travel together more often. We've bought a fifth wheel and huge red truck, now known as Go Home II and the Big Red Blind, to travel in. We've traveled through many states and even through several Canadian provinces and a territory on our way to Alaska. 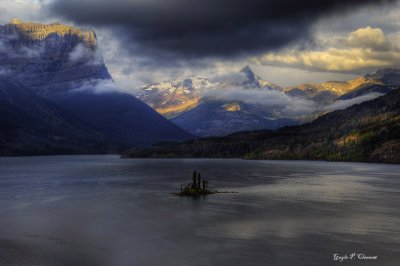 Early Light Above Wild Goose Island
I have a feeling this is the first of several photos of this island. It's one of those must-take pictures when you come to Glacier National Park. I'll be in a photo workshop here for the next few days and I imagine this will be one of the stopping points.
We shared the chilly east 17 miles of the Going to the Sun Road with a few hearty souls. Herds of elk moved through the meadows. The stags bugling was an eerie sound in the stillness. Deer leapt across the road, making me glad that Breland is such a cautious driver. Fall colors surrounded us. I hope those colors will peak in the next few days. The clouds covered the mountains, rising for just a few moments.
It's snowing very heavily on the mountains right now and the scene may look very different tomorrow.
79 comments leave a comment 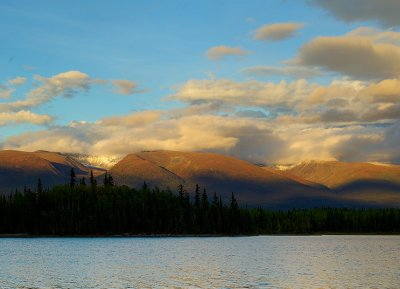 Boya Lake, British Columbia
This was our backyard last night. At the last minute we decided to leave the Alaskan Highway and travel south on the Cassiar instead. On the way we passed a small lake with a pair of loons. In the parking area there was a flock of crossbills! I was able to get some pretty good shots of the loons, but the light reflecting off the gravel overpowered the crossbills.
We spent the night at one of the provincial campgrounds. No electricity and only a pump for water but what a view! We pulled into a space next to this lake, put steaks, baked potatoes, and a packet of vegetables to cook on the grill and enjoyed the quiet. The mountaintop across from us would become covered with clouds and then the clouds would lift like a stage curtain to reveal a fresh dusting of snow.
14 comments leave a comment 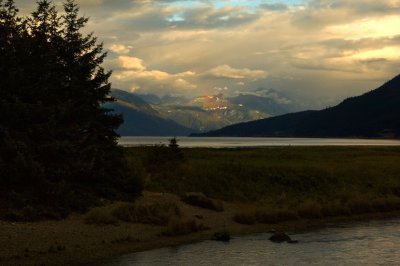 Haines, Alaska Again
Haines is such a beautiful place that we planned our trip so that we could stay there again for a few days. The surrounding mountains and glaciers, clean aqua water, abundant wildlife and friendly people make it a really special place. Late yesterday afternoon after traveling along the river to see the grizzlies and eagle fish for salmon we rounded a curve to see an especially vivid rainbow. I'll post closer photos of the rainbow in my Alaska gallery but I especially liked the way the distant mountains were lit by the sun and rainbow.
21 comments leave a comment 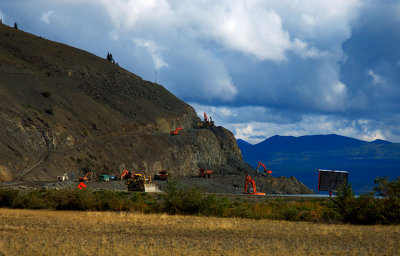 Construction at Destruction Bay
We're retracing our steps for a bit as we head south from Alaska. In general the wilderness-area roads in Alaska and Canada have been good, mostly two lane highways like you will find in rural areas throughout the US. The exceptions were the areas subject to frost heaves, places where the permafrost has begun to melt and the areas where slides have taken out the road along the Alaskan Highway. The most memorable section for everyone I've spoken to has been the area from Haines Junction to Tok. The construction around Destruction Bay has been going on for several years. You can see how small the huge equipment looks as they work to take down a large section of a mountain so that the road can be widened.
9 comments leave a comment 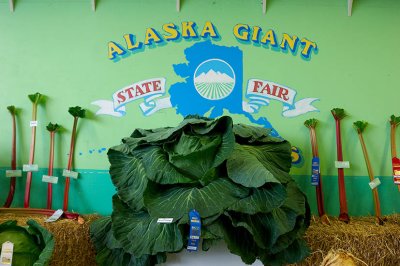 Alaskan State Fair
After several days in a gorgeous wilderness setting we moved on to Palmer, Alaska. Our days here have been spent on getting tires rotated, oil changed, clothes washed and shopping done before we begin our trek south. It hasn't been all work, of course. We spent quite a bit of time exploring the rivers and trails in the area. Today we went to the Alaskan State Fair. The fair was exactly what I'd hoped, a family event that celebrated the best of Alaska. Crops, quilts, beekeeping and farm animals were mixed with the more typical carnival rides and food. The giant Alaskan cabbages were a must see. Here's the blue ribbon winner but the judging of the giants will be Friday night and one may be even larger than the 58 pounds of this one.
We head toward the Yukon tomorrow. I'm looking forward to a bit of adventure.
4 comments leave a comment 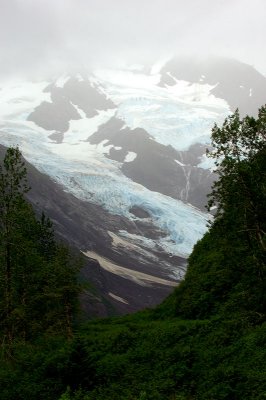 Portage Valley
After a very nice few days in Seward we moved on to the Williwaw campground in Portage Valley. This camground is considered by many to be the most beautiful campground in Alaska. Each camping spot is 100 feet away from its nearest neighbors and is heavily wooded. The Middle Glacier rises above the campground and the glacier and several waterfalls can be seen from our campsite. There is a salmon viewing area and several boardwalked trails connecting our campground with ponds, rivers, waterfalls and the Begich-Boggs Visitor Center dedicated to the memory of Senator Begich from Alaska and House Majority Leader Hale Boggs, whose plane was last heard from as it entered this valley. We drove through the 2 1/2 mile long tunnel to visit Whittier, visited the Crow Creek mine in Girdwood and just relaxed for several days. We'll move on tomorrow, heading for a new campsite and the Alaskan State Fair on Thursday.
17 comments leave a comment 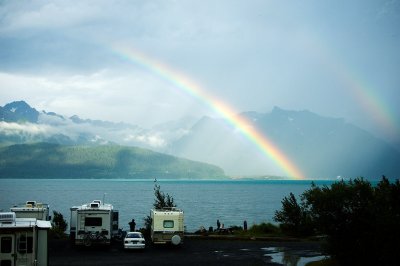 Seward Waterfront
The city of Seward has almost a mile of camping sites lining the waterfront on Resurrection Bay. When we reached the Seward highway we decided to turn right and head on to Seward for a few days. I love being on the water. This rainbow lit up the afternoon for us.
3 comments leave a comment 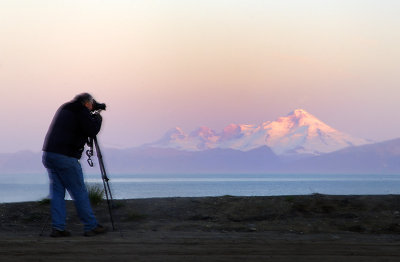 Goodbye to Ninilchik
We had a list of things we planned to do in the Homer/Ninilchik/Soldotna area and we've finally accomplished them all. In the last two weeks we've: 1)photgraphed the village of Ninilchik 2)hiked trails along the many creeks and rivers 3)had dinner at Halibut Cove 4) visited Seldovia 5) dug for razor clams 6)went on a halibut fishing charter 4) explored Old Town Kenai 6) visited with friends 7) toured the Pratt museum 8) visited the Wynn Wildlife Sanctuary 9) fished the Kenai 10) photographed loons and 11)took photos of the volcano range at sunrise.
On Breland's birthday It was really cold (37 degrees) at dawn and there was a strong wind coming off Cook's Inlet. I shivered in the 5 a.m. cold and decided to let Breland capture the scene. You may notice he's a bit blurry. That's because I was shivering and didn't take out my tripod.
We had a terrific time in the area and we're ready to move on. We may be boondocking for the next few days so we won't have internet access. I saw "may" because we're not sure where we'll park next.
See you down the road.
17 comments leave a comment 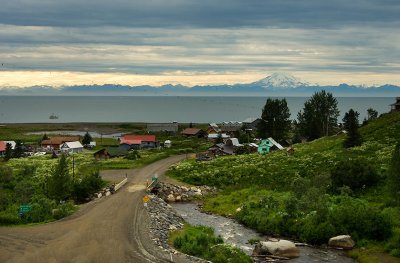 Ninilchik, Alaska
We've settled in for a while in Ninilchik, Alaska. The tide will be right for clamming this weekend and the reds are running so we hope to have a good time digging and fishing. We're camped in view of three peaked, snow-covered volcanoes across the inlet from us.
This photo is the first of many I plan to take of Ninilchik Village, a Russian settlement here. This isn't the best angle but we'd hiked over from the park and this was as close as I could get. Several Russian families remained here after Alaska was sold to the United States and the village, with it's beautiful little church, is charming.
19 comments leave a comment 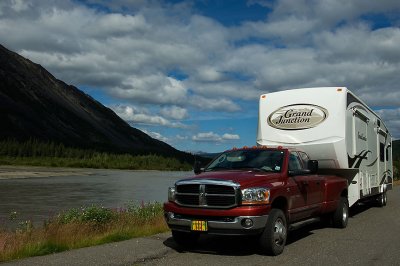 A Delay in Palmer
We left North Pole with plans to stop overnight in Palmer to stock up a bit before we headed down to the Kenai for fishing. Go Home got sick along the way and threw up several times. We were waiting for news about our newest grandchild and between the worry and the dog's misery it was a tense drive. Our son called about Celeste's birth, saying that everyone was doing well.
We decided to spend an extra night in Palmer to take Go Home to the vet. After several hours at the vet and Xrays it was determined that he'd eaten foxtail bulgur, a beautiful grass with really wicked stickers, and that some was embedded in his throat. He's doing much better now and tomorrow we head for Ninilchik. The red salmon are running and Breland plans to catch a few.
The photo is of one of the many pullovers along the highway south of Denali. We stopped here for a picnic on our way to Palmer.
13 comments leave a comment 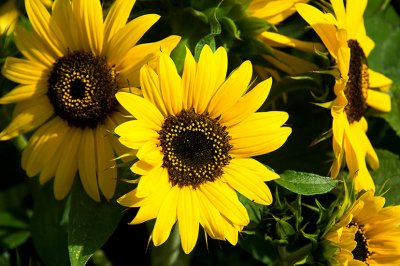 Flowering Under the Midnight Sun
Today we decided to take a real break from the wilderness for a bit and spent the day sightseeing in Fairbanks. We were told about the magnificent University of Alaska museum throughout our trip. It was everything that we'd been told. Such an incredible treasure!
After the museum we visited the Botanical Garden. We'd seen photos of the enormous cabbages grown here for years. Nothing prepared us for the intense color of the flowers. The delphiniums were glorious.
Next we stopped at the Farmer's Market to see if we could find fresh produce. It was there in abundance. On to the the Creamery, a former dairy that is now maintained as a wildlife preserve. Finally, a trip to downtown North Pole to see the area that handles all of the letters from Santa. No wonder I'm too wound up to sleep. It's 11:46 p.m. and I can see the first colorful sunset I've seen since we arrived in Alaska.
14 comments leave a comment 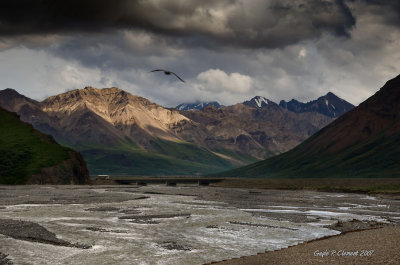 Five Days in Denali
We've just returned from five blissful days in Denali. The weather was sunny and The Mountain was out our first two days. There was more wildlife than I had expected and the vistas were heavenly.
We had no electricity or internet for those days, but we didn't miss either. Our rolling home easily carries a week's worth of fresh water and we even had the luxury of hot showers. Most nights the temperature dropped into the forties but the furnace kept us cosy. I almost felt guilty.
The campground we stayed in was 30 miles into Denali and we needed a special pass to drive in. We were on the Teklanika river and grizzlies, caribou, moose and wolves used the gravel riverbed as a path. Once we'd parked we could not drive our vehicle again for at least three days, to minimize disturbing the animals. A bus service passed right in front of the campground, driven by very knowledgeable guides. They treated the rides like a safari, stopping for animals and beautiful scenery. Hikers were able to get off the bus at any point and flag down a bus when they were ready to return.
I have gigs and gigs of photos to process. I've posted a few at the beginning of my North to Alaska gallery. I do have several photos of Denali when it was out and will post them later. I've posted this one of the Toklat River because I hoped the bus at the beginning of the bridge would give a sense of the scale of the mountains. We rode a bus like that several times. On yesterday's ride we saw eleven grizzlies, three moose, three wolves eating a downed caribou, a herd of over two dozen caribou, and countless other animals.
Tonight we're in North Pole with electricity and internet and temperatures in the seventies. It's quite a change.
30 comments leave a comment